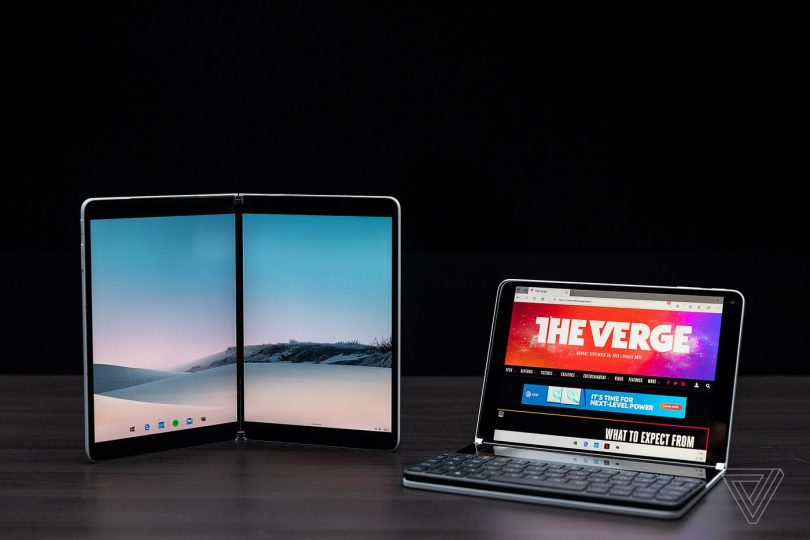 Recently Microsoft has released its first emulator for Windows 10X, which allowed the developers for the first time to look at the new version of the operating system for devices with two screens.

In Microsoft, they want the developers to start working to optimize applications at the end of this year, therefore, this emulator allows you to familiarize yourself with the basic functions of Windows 10x.

The first view about the newest OS? It resembles a slightly more modern version of Windows 10, optimized for devices that will come out in the near future.

Windows 10X is designed exclusively for folding and two-screen devices. One of the most notable changes is the new "Start" menu: it has no more animated tiles that were present in Windows 10, Windows 8 and Windows Phone. Thus, the menu has a more simplified view. 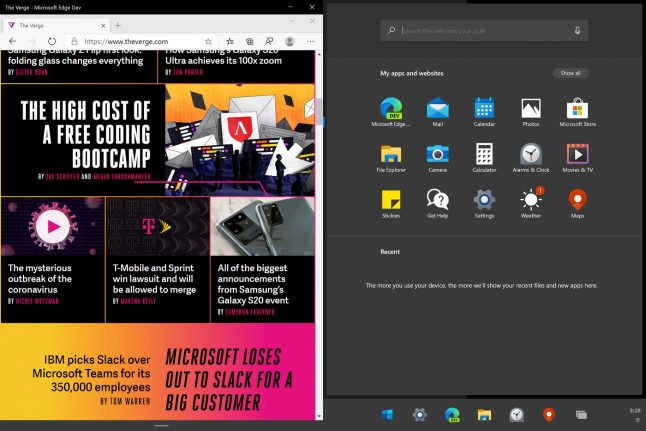 In the "Start" menu, Windows 10X has applications that can be fixed, as well as a list of recent open documents. It looks more like a task starter. You can search for applications, documents and even web content. In addition, the basic voice input is also supported. Nevertheless, Cortana ( Voice Assistant Microsoft) is missing - it is not even in the Windows 10x settings section.

In addition to the "Start" menu, Windows 10X is generally very similar to Windows 10. There are dark and bright modes that can be selected visually, but the biggest changes relate to how you work in multitasking mode with Applications. Unlike Windows 10, you cannot simply place applications anywhere on the screen. Applications are open by default on one screen, and you can drag them to another with a mouse or sensor so that they are fully stretched and covered the entire display.

Microsoft also uses gestures for multitasking, and some of them seem similar to those that have already existed in Windows 10 and Windows 8. With the exception of the tiny buttons to "minimize" and "close", which are sometimes pretty Sensitive to pressing at 10x.

Speaking of gestures to Open the Start menu or the list of running applications on the taskbar you need to swipe below up. You can also access the updated support center from the taskbar, which includes quick access to such settings, such as volume, brightness, Bluetooth, disconnecting auto turning and much more.

View tasks was also updated, and you can use it to call applications on a specific display. If you are already accustomed to the old Windows desktop or conductor, both of them disappeared in Windows 10X. If you right-click on the desktop in Windows 10x, you just get the ability to change the background in the settings, and application icons or documents are not saved here. 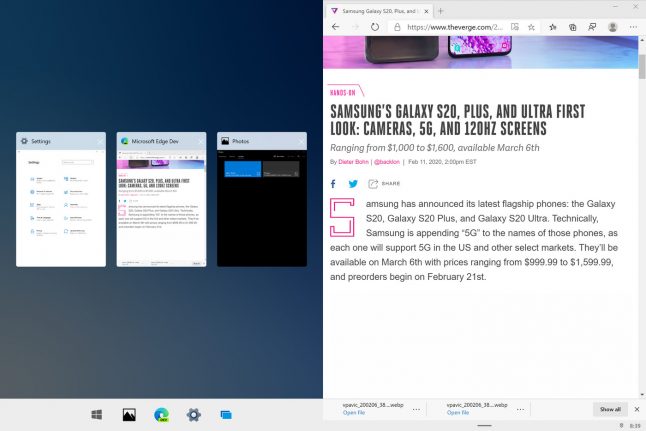 Similarly, the traditional conductor was replaced by more modern, which will send users of Windows 10x to various Libraries and support external files to transfer files.

Other New Supplement in Windows 10x - Wonder Bar. This function is installed above or under the keyboard or displayed as part of the software keyboard in the operating system. It is similar to the Apple touchpad and provides rich input capabilities, such as GIF files or EMDZI, or even a software trackpad.

The Wonder Bar emulator looks simple, and it is quite difficult to test the function without specially optimized applications. Microsoft assumes that information on applications such as NetFlix will appear on the panel. Even the utilities such as Windows Calculator, which have always top mode, may appear here. We believe that this is a fairly interesting part of Windows 10X, but it will depend on developers who are at the moment try to make it most useful as possible.

This Is the New Wonder Bar for Windows 10x. IT Includes a Software Keyboard, TrackPad, And Quick Access to Gifs, Emojis, and more. You can Even Pin Videos INTO IT. It's One of the Best 10X Features https://t.co/kvbnfkbtoo pic.twitter.com/0gzlaqpaia

In general, Windows 10X in its current state looks like a more perfect and modern version of Windows 10. However, you should not forget that this is only an early Windows 10x and now OS works in the basic Emulator, and Microsoft does not plan to produce the system until the end of this year.

The American company probably does not want to show all the charms of Windows 10X, and that is why the developers used this emulator, since now the OS looks quite poorly. We have no doubt that we will see many big changes within the system itself. They include the separation of applications, OS and drivers, which allows you to install and complete Windows 10X updates in less than 90 seconds.

Microsoft also enters the containerization technology to start Win32 applications on a lightweight virtual machine. Microsoft container is used to ensure proper operation of old applications on devices with two screens, including a decrease in battery life and a way to display programs on screens. This completely new approach means that there will be some problems with the compatibility of applications that will have to solve some developers.

A Quick Tour of the Basics of Windows 10x Navigation https://t.co/kvbnfkbtoo Pic. Twitter.com/2YC6LLKGP9

In addition, given that the developers continue to dig in Windows 10x, we can already see new animations and changes OS design Most likely, there will be more further, but we also hope to learn more about Microsoft ambitions with regard to Windows 10X at the company's developer conference to be held in May.

5 reasons why you should turn off Microsoft Defender on Windows

How to collect gaming pc?

How to upload music on the iPhone from the Internet directly (without a PC)?