Smartphone support for GLONASS paired with GPS is becoming the new standard. But is it really necessary for a gadget to be able to communicate with Russian satellites? In the article we will tell you what GLONASS support gives the user of a mobile device.

GLONASS is a domestic satellite navigation system. The use of GLONASS in the phone allows the owner of the device to determine their location with a high degree of accuracy, as well as get directions to the desired point. The domestic navigation system is still the main competitor of the American GPS, with which mobile device users are much better acquainted.

Despite the fact that the work on the creation of the system was completed only in 2015, smartphones with GLONASS navigation began to appear in 2011. Now you will not surprise anyone with a gadget that supports GLONASS.

GLONASS in phones: the first pancake is lumpy

It is believed that Apple was the first to provide its smartphones with GLONASS support. This opinion is wrong. The first smartphone with GLONASS navigation was made by the Chinese manufacturer ZTE by order of the mobile communications provider MTS. The budget model MTS 945 was presented in 2011 very pathetically. The leading shareholders of MTS personally showed the gadget to President Vladimir Putin, saying that the device is in no way inferior to the former super popular at that time iPhone 4.

MTS 945 faced a resounding failure in the market. According to the plan of MTS, the volume of the first batch was to be 500 thousand units - however, in the end, only 5 thousand units of goods were sold, and it took six months. The failure occurred for a number of reasons: firstly, the functionality of the MTS 945 was simply ridiculous - especially judging by the standards of the modern market, secondly, most of the gadgets were sold locked under sym- MTS cards, thirdly, consumers did not look at GLONASS support as a serious advantage.

Due to low sales, ZTE ceased production of the MTS 945 at the beginning of 2012.

Around the same time, Apple quietly added GLONASS support to the feature list of the new iPhone 4S. The official version states that due to this step, Apple wanted to improve the navigation capabilities of its of the flagship, but there is another opinion - the Russian government blackmail the manufacturer, threatening to prohibit iPhon imports if they do not equip them with the support of the domestic navigation system. Whatever the reason, Apple spawned a new fashion - followed by her smartphones with GLONASS Nokia and samsung.

GPS satellites do not fly to the north of the 55th parallels (in the northern hemisphere). This parallel is located Moscow. In the capital, both navigation systems work equally efficiently - but in cities that are located closer to Moscow to the pole (for example, in St. Petersburg), GLONASS provides more accurate information. The Russian system satellites and in the north and in the south to the 65th parallels - that is why citizens of Scandinavia countries bordering the Nordic seas (Norway, Sweden), prefer to use GLONASS.

GLONASS is oriented primarily on the "its" user. The developers of the navigation system did not seek international expansion.

The average error in the GLONASS system is 2.8 meters, the GPS is 1.8 meters. However, to do the spelling conclusions on the basis of this statistics. The smallest value of the average error will be with the simultaneous use of GPS and GLONASS - 1.25 meters. Now the leading manufacturers of mobile electronics equip all their new gadgets by two-system navigation chips.

Even the Federal Agency of the United States, a couple of years ago, was thinking about using GLONASS in combination with GPS to establish the location of callers By emergency service number 911. Is it not better confirmation that one navigation system is not able to provide a worthy result?

How to check the support of GLONASS?

clarify whether the GLONASS smartphone supports, it is possible to simply look into the technical characteristics of the device. If there is support, it will be accurately mentioned in the block called "navigation" or like that.

the user who believes that it is possible to write anything, and not trusted specifications, it is recommended to carry out a test using the program GPS test, which extends to the Google Play store free of charge. It is enough just to run the application on the smartphone, go out with a gadget to an open space and wait when the program determines all satellites. If the list of available satellites will be marked by the Russian flag, it means that GLONASS mobile device is really supported. 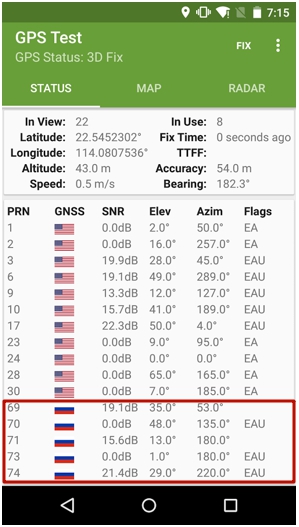 Unfortunately, you will not pass the same check with the iPhone. The AppStore has an analog application GPS Diagnostic, however, it marks signals from GLONASS as if they are from GPS - and besides, this program is already 229 rubles. However, iPhones are such popular gadgets that their characteristics are known to everyone, and there is no reason to doubt their accuracy.

How to use GLONASS?

Activate GLONASS on the smartphone manually is not necessary. It is enough to enable GPS and A-GPS through the settings, and the GLONASS will also work. Toggle, allowing you to activate GLONASS without GPS, there are no gadgets. 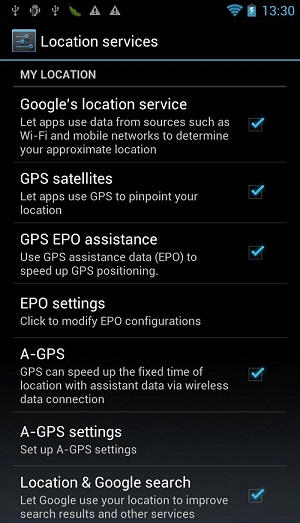 It is curious that on the chipsets of different manufacturers the procedure for the inclusion of GLONASS is different. For example, the iPhone 4S works on the Qualcomm chipset, and on this device, the search for GLONASS satellites starts only if the main navigation system (GPS is recognized) does not cope with the location determination. According to the manager Qualcomm L. Splendorini, so there are all smartphones with Qualcomm processors. The manager claims that the simultaneous launch of GLONASS and GPS gives a greater load on the battery - the movement of GLONASS "into the background" is due to the desire to save the battery charge.

What smartphones are supported by GLONASS?

Smartphones with GLONASS and GPS is very much, so you are meaninglessly listed. The user who wishes to acquire a gadget from GLONASS will probably not be mistaken if the device prefers one of the following manufacturers:

Are there other navigation systems?

A new competitor to GLONASS and GPS is a Chinese navigation system called BeiDou .

This system began operating in 2012 and should not reach full capacity until 2020. Some manufacturers already in 2016 began to equip their devices with BeiDou modules, but this trend has not yet gained mass. In 2017, only two companies are actively working with Chinese satellites - these are Xiaomi and Samsung.

The European Union is also working on creating its own navigation system called Galileo, but this system, most likely, will have nothing to do with mobile technologies.

In 2011, mobile phone support for GLONASS navigation was presented as a sensation. Only a few years have passed - and GLONASS support has turned into the same ordinary smartphone technical characteristic as, say, the ability to work with GPS / A-GPS.

The presence of the GLONASS module does not contribute to a cardinal increase in the quality and speed of the navigator"mobile phone", but with simultaneous access to 2 systems, the risk of missing the desired turn is lower. There are benefits from GLONASS support, but choosing a smartphone based on this criterion is at least stupid.

Where to find a screenshot on Android

Why Telegram is not as secure as you think?

How to delete all data from the phone on Android