Intel's Thunderbolt 4 is at the forefront of peripheral connectivity technologies. Work on the next generation - Thunderbolt 5 - is already underway.

Thunderbolt 5 has no release date yet, but some of the specs have already been revealed. Notably, Intel plans to double the speed of the interface. Let's talk about what else is known.

Thunderbolt 4 entered the market a year ago, so it's definitely not worth waiting for the fifth iteration in the near future. Most likely, its release will be delayed until next year, and possibly for a longer period.

In the fresh Alder Lake processor family (released November 4, 2021), Intel left the Thunderbolt 4 controller. All the top laptops next year will be released with it. 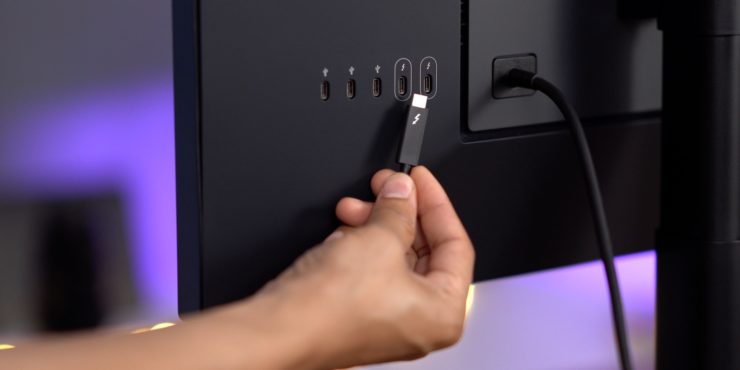 Thunderbolt 5 throughput will be 80 Gbps. This figure is hinted at by the statements of Intel representatives themselves. Compared to the fourth generation, this is a twofold increase in speed. There are no other ways to connect with a similar speed in the world yet.

At one time, Thunderbolt 4 became the leader in its line in terms of power and practicality. However, the bandwidth was disappointing: it remained at the level of the third generation, namely 40 Gb / s.

With the newly announced interface, Intel intends to make a breakthrough. Its implementation will improve the functionality of 4K and 8K monitors with a high refresh rate, while backward compatibility with older versions of Thunderbolt and USB will be possible.

Thunderbolt 5 is based on PAM-3 pulse-amplitude modulation, an advanced way to transfer data over a cable.

Traditionally, the new interface will use NRZ encoding (no return to zero), which allows the transmission of one bit of information, that is, 0 or 1. For some connections, the ability to transmit two bits via PAM-4 will be added. Index 4 in this case displays the number of combinations of two bits (00, 01, 10 and 11).

In addition, Thunderbolt 5 will support a 3-bit data signal, thereby realizing higher throughput than that achieved by standard implementations of NZR and PAM-4.

As it became known from the Intel Twitter account earlier this year, the interface connector will remain unchanged. All existing devices with USB-C and Thunderbolt will be able to recognize an improved plug, although it is unlikely to affect the data rate.

Is it worth it to force close applications on a smartphone?

How to hide the app on Android?

Bluetooth radiation: Is it so dangerous?

How to Clean Memory on the iPhone?

What is the difference between CPU and GPU