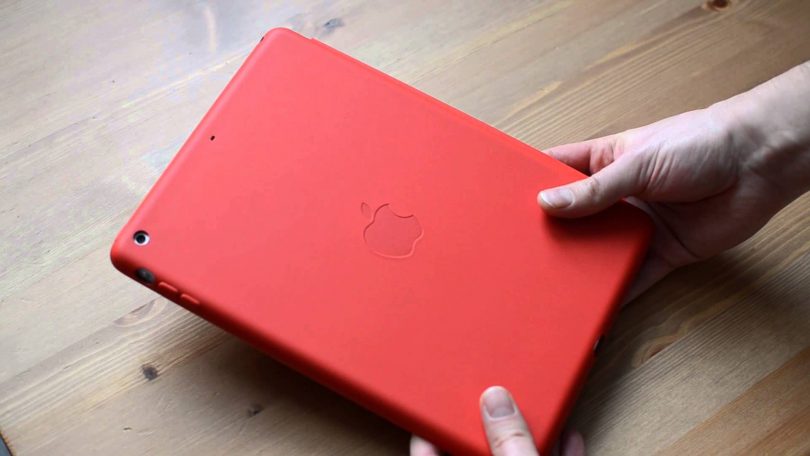 Accessories allow you to get the most out of your tablet and protect your device. Which of the accessories for the tablet should be purchased first?

Buyer's headache does not end with choosing a tablet. To the gadget itself, he also needs to purchase a number of accessories, without which the full operation of the device will be impossible. There are accessories of the must-have category - it is better to buy them right away, in the same check with the tablet, since they are responsible for protecting the gadget. Others are not necessary to purchase, but they can also be very useful - depending on the individual needs of a particular user.

In this article, we will talk about all kinds of accessories for the tablet, protecting the device and helping to realize its full potential. And let's start with the most important ones.

A screen protector is the first thing you need to purchase with your tablet. The probability that the large screen will be scratched, for example, by the keys in the bag, is quite high, so it is recommended to stick the film even before the tablet is put into operation. It is better to entrust the implementation of this procedure to sales office consultants - they, of course, will take money for the service (250-300 rubles), but they are guaranteed to do everything with high quality. An independent sticker can result in negative consequences - in particular, numerous air bubbles that have gathered under the film, or damage to the product itself. 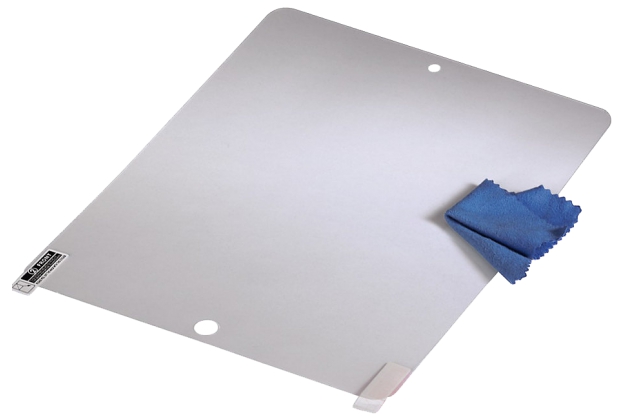 There are several types of films for tablets: the most common are glossy and matte. The advantage of glossy is that it does not distort the colors of the display. Under the matte screen looks more faded, but it does not leave fingerprints. In addition, matte film protects against glare better than glossy film. The price of films of both types is the same - in Russian retail about 190 rubles. anti-reflective and anti-shock films are more expensive (290-390 rubles), but they are much less common in shop windows.

Original films are produced for popular tablet models. It is recommended to buy exactly such because they already have all the necessary cuts - for example, under the speaker, the front camera or the HOME key - and it is easier to glue them. However, the owner of a small weld gadget should not be desirable: it can purchase a universal film with marking, armed with scissors and engage in independent cutting.

Office consultants hardly take up for this case - the risk of leaving the client with a dissatisfied sticker is too great.

If the film protects the screen, then the case is the rest of the body. Much of the flag out about the film is relevant and for covers - they, in particular, are also original and versatile. The universal case is usually suitable for tablets of different factors - for example, for a 7-inch gadget, and for an 8-inch - and looks like this: 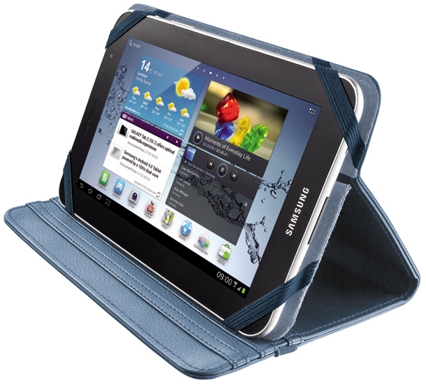 Contuse of universal covers accounted for owners of budget devices from Prestigio, IrBis, Digma and other manufacturers of "second echelon", because there are simply no original covers for such tablets.

Choosing a tablet case, you need to pay attention to the method of fixing the accessory cover. If the cover is fixed with the help of a gum, this is not the best option - an elastic band will stretch over time and stop providing the necessary tension. It is better if the lid is kept due to the stlity with a magnet. The magnet will definitely not fail, which means that the case will be suitable for use for a long time - until it is finally expanded. 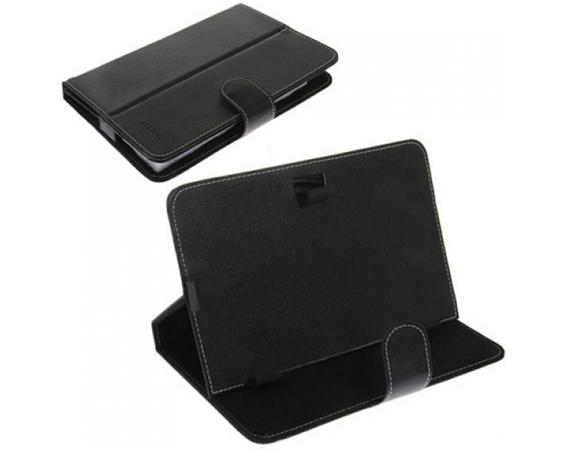 If a person uses a tablet actively and does not want to spend time to constantly open - close the lid, it should be prefeed Case-overlay. Such an accessory protects only the back of the tablet - the screen is always available. 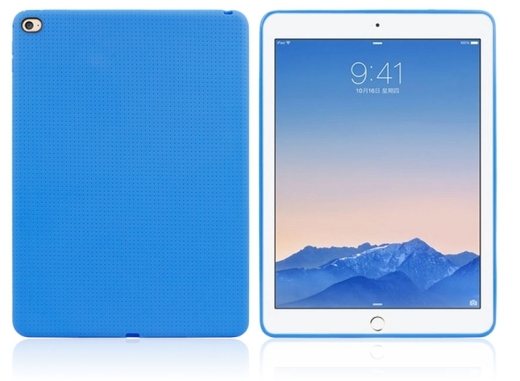 Find a cover-lining easily, alas, only for the product of Apple. If the owner of another tablet wishes to acquire a similar accessory, he will have to dig in the catalogs of Chinese shopping areas for a long time.

Most tablets are equipped with card slots microSD (or just flash drives). Using such a card, you can significantly increase the amount of user memory of the gadget.

Do you need to do this? It is enough to simply calculate. In the mid-level tablet, it will probably be all 16 GB of the built-in memory - part of this volume will be occupied by system files. One film in HD format weighs about 3 GB. Consequently, the device's own memory is enough for only 4-5 films. In this case, there will be no place for photos or for video from the camera, nor for any important documents.

Acquisition of Flashki will save from the need to save memory. Now there are MICROSD cards of different volumes - from 8 GB to 256 GB. The cost of the card, of course, depends on its volume. Most often, users prefer flash drives on 32 GB - the price of one is approximately 800 rubles.

The user who gathered to purchase a flash drive from Samsung is likely to be the question: how does EVO differ from EVO +? There is no information about this in RuNet because Russian stores are where to sell products from SanDisk and Kingston. The answer to the question is given foreign portals: Flashpets type EVO + the speed of reading and writing data is approximately twice as high. But it is in theory. In practice, there is almost no difference - so buying more expensive EVO + meaningless.

The remaining accessories for tablets cannot be called vital, but some categories of users without them are also not to do.

The keyboard is needed by a jower, which prefers to use the tablet not only for entertainment, but also for work. It is best to take a universal Bluetooth keyboard, which is also suitable for tablets with Android OS, and for iPad - for example, the product from Logitech, K480. The cost of the device is about 2,500 rubles.

Use such a keyboard easier than simple : First you need to search for Bluetooth on the tablet and set the pairing between the two devices, then insert The tablet in the connector highlighted with yellow - and you can start typing.

The curious feature of the K480 model is that it is permissible to connect to 3 devices simultaneously. Switching between devices easily: for this purpose, a yellow kneecko is designed to the left.

Unfortunately, there are no headphones in sets of many tablets. Therefore, it is worth buying at least the simplest "droplets" at first - otherwise how to watch movies and videos from YouTube in the subway? These are headphones with a microphone for Aliexpress cost less than 200 rubles: 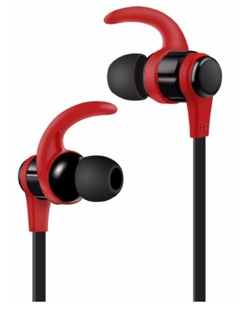 Select headphones for tablet need According to the same criteria as for a smartphone, no difference. On our site already there is Article, telling in detail about these criteria.

The SIM adapter is a thing from the category of "a trifle that can save your life." It is recommended to purchase an adapter to everyone who in a smartphone and tablet cost SIM cards of different sizes - especially since the cost of this accessory is about 30 rubles (on Aliexpress).

Imagine that Internet traffic ended on Micro-SIM from the tablet. Instead of urrancy to call the operator and fussily explain, why it is necessary to reconnect the service of unlimited from the current day, you can simply get Nano-SIM from an iPhone, using the adapter to install it in the tablet and quietly complete the work. This is just one example - in fact situations where the adapter may be necessary, a great set.

Thanks to the automatic holder, the driver is able to use the tablet as navigator - The benefit of the lack of navigation applications is now not in the AppStore or Google Play. To secure the tablet in the car it is not necessary to use magnetic holders, as well as structures that are hung on the air duct. It is worth remembering that the tablet is a more massive device than the smartphone; During a ride on an uneven road, he easily can snatch the blowing grid. It is best to use a holder with a vacuum suction cup and a rigid leg.

We have already written about whether How to choose a car for tablet - selecting the accessory, it is necessary to follow the recommendations set out in this material.

Despite the fact that the batteries in tablets are usually greater than in smartphones, "tablets" are also discharged quickly. Due to the screens of impressive sizes that consume energy with an impressive pace, tablets, even having a "aboard" battery at 6000-7000 mAh, operate an average of 1-1.5 days - then require connection to the outlet.

To avoid the situation when the tablet refuses to function and requires feeding at the most inopportune moment, you should get a device, which is called Power BANK - or portable battery.

from the Power Bank to recharge the tablet will be able to anywhere, even if there are no cables - most external batteries has built-in Laces for connecting to a mobile device. Having a Power Bank at hand is always better, but about going to the long road without this accessory, there is nothing to think.

If the portable battery is purchased "under the tablet", it is necessary to prefer an accessory with a high capacity - from 8,000 mAh.

to a tablet that does not have a slot under a microSD flash drive, but at the same time supports technology OTG, the user is worth purchasing a special OTG adapter. With it, you can copy data to the tablet with USB flash drive and in the opposite direction.

On the one hand, this adapter is a full-size USB 3.0 connector, on the other - the Micro-USB plug, which is inserted into the mobile device.

The cost of such an accessory is trivial: Russian Online stores are asked for OTG adapter about 120 rubles. To buy an adapter is recommended even to those users whose tablets are canceled with memory - because at any time it may be necessary to throw off some file from the tablet to the laptop, and through USB flash drives it is easiest way.

Consultants of the salons are often cunning when they convince buyers to purchase one or another thing. However, arguing that the tablet must be taken immediately with accessories, they are not lying. Case and Film - this is 2 accessories, without which the tablet is strictly not recommended. For the installation of the film, it is better to pay for employees - they will accurately stick it without bubbles, which will then call the eye.

The rest of the accessories are worth buying as needed - and to realize the need, you need to use a little to a device. If the owner of the tablet feels, for example, that he catastrophically lacks the ROM memory, it can buy a microSD card and eliminate this problem.

What smartphones on Android One you can already buy

What is white balance in the photo?

10 reasons why Bluetooth is needed in the car

LineageOS: Overview of the most popular custom firmware for Android