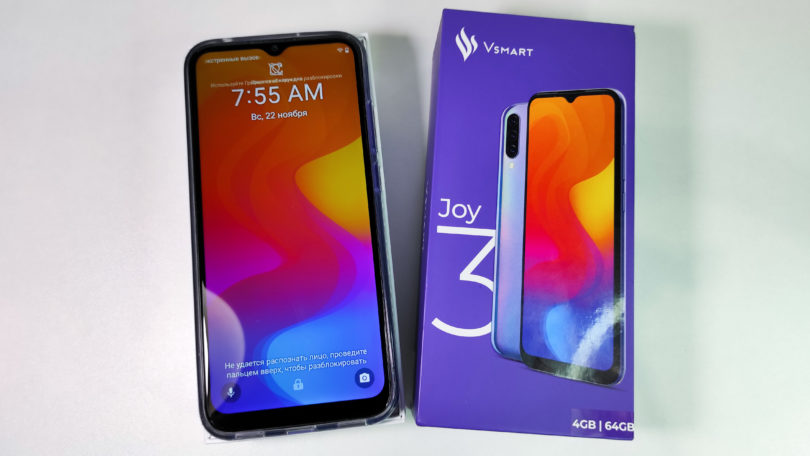 A representative of the largest Vietnamese conglomerate Vingroup brought five branded smartphones to Russia and one of the models was at our disposal. We tell you more in the review VSMART Joy 3+.

Chinese corporations such as Huawei, ZTE, Realme and, of course, Xiaomi have long and firmly entrenched themselves at the forefront in the production of budget smartphones. Americans from Motorola are also fighting for a place in the sun, and even the South Korean firm Samsung has descended from the flagship heights to offer several affordable models to budget-conscious users.

Along with technological innovations dictated by high competition, one of the key factors that played on the demand for the goods of the above mentioned firms was the popularization of manufacturers' brands around the world.

The same Motorola distributed phones in Russia even before they became “smart”, Samsung sold the first foreign models of household appliances and electronics to our parents, and Chinese firms considered the Russian market is promising, as soon as they themselves were born. 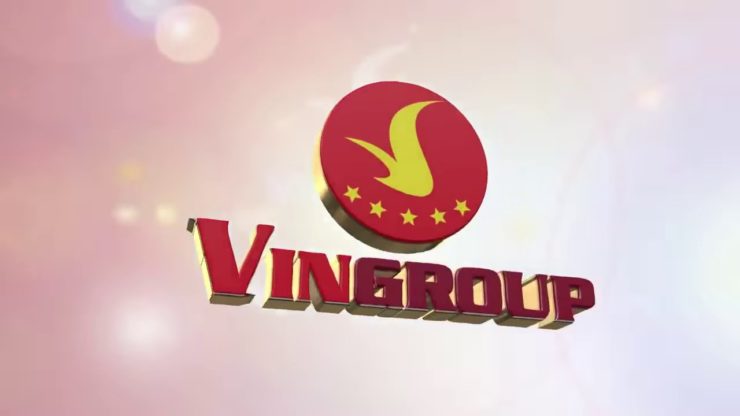 And now the Vietnamese manufacturer Vingroup, so far unknown to our consumer, enters the big game with digital goods straight from its own assembly complexes, which produce over 125 million devices per year.

By the way, in Vietnam, Vingroup is known not only for achievements in the field of high technology, but also as the owners of an impressive distribution network, a huge number of commercial facilities and a number of subsidiaries involved in the tourism industry and even farming.

As Vietnam's largest employer and one of the country's largest private corporations, Vingroup is sending its tech-savvy Vinsmart representative onto the global stage with an ambitious mission to build a smart device ecosystem that integrates smartphones, gadgets, home appliances and medical equipment.

Combine the Russian market Vinsmart profits, armed with a series of smartphones of its own production. One of them, the budget model VSmart Joy 3+, finally turned out to be at our disposal and today we will tell about it in more detail. 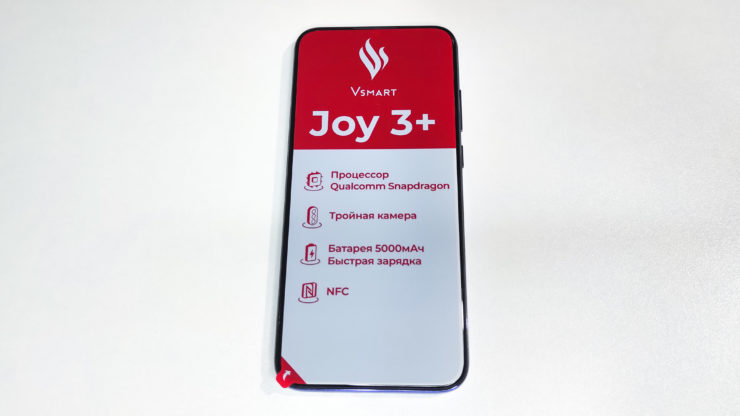 Smartphone You will find inside a rectangular box of saturated-purple color. The rear panel of the device is covered with a gradient glass that turns the reflected light sources into rainbow overflows. I got a very pleasant shade "Purple Topaz", but there are still black and white models.

In the lid hidden transparent Complete case, user manual and key for removing a double tray under Nano-SIM card and microSD. The kit goes Charger USB-C and branded intra-channel headset with interchangeable ambursors, collected, however, already in Indonesia. 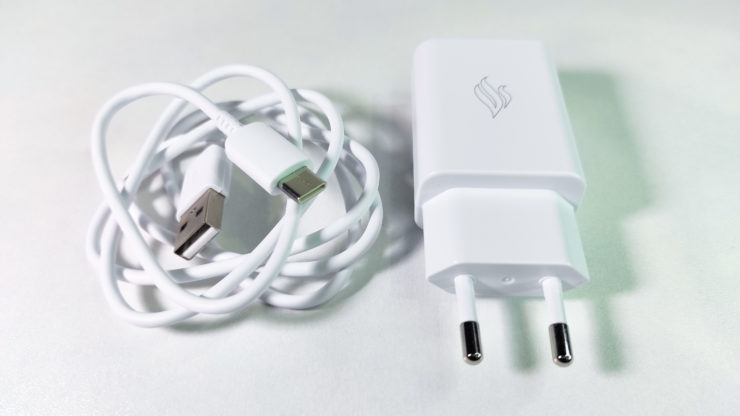 Lens of the main chamber, together with a flashlight, are located vertically on the left side of the panel, the round biometric scanner is located in the center, and pliable control keys are placed on the right side. Charging port in Joy 3+ from below, and the headphone slot is derived to the upper face.

Relatively large and pleasant weighty, externally, and to the touch smartphone is almost completely identical to Chinese brethren on the price segment. Silicone tire almost does not thicken the device and does not interfere with contact with controls, but collects fingerprints hardly better than covering the case.

Smartphone is equipped with an IPS matrix diagonal of 6.52 inches with a resolution of 720 x 1600 Points and aspect ratio 20: 9. The frontal chamber is recessed into the opening cut-out cutting, the speaker fitted on the upper boundary, thanks to which Joy 3+ is the owner of a modern unprofitable display.

Picture at the smartphone juicy and saturated with flowers. There are no high hertes to wait, but for the lack of such a look at the videos or surfing on the Internet from it very cozy. The lighting sensor works correctly and quickly, the adaptive brightness function is enabled by default.

In the screen settings, everything is standard: dark theme and night mode, selection of screensavers, scaling of the picture and font. There is no choice of color scheme and no read mode, but it is rather from the discharge of the delights. The display at Joy 3+ is really good. 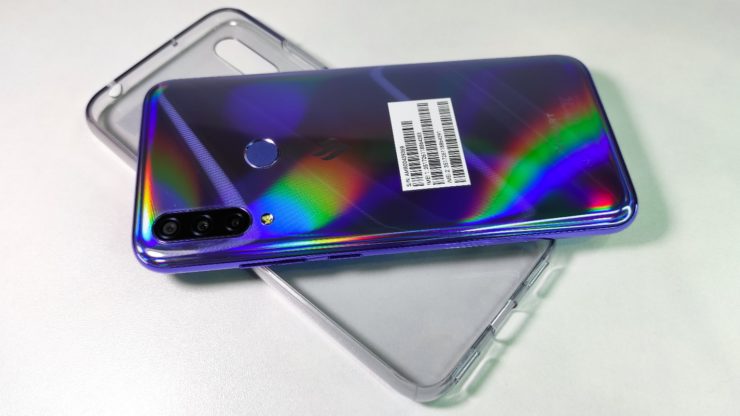 Front chamber O 8 megapixels supports Portrait mode with the beauty function and even several eigen ar stickers. In addition, it is responsible for the built-in system of face recognition, with which the smartphone can recognize you and unlock the display. Next, let's see how it all looks in the photo.

Daytime shooting in sunny weather and the same view with the enabled wide-angle lens. The landscape is almost postpocalyptic, but you can catch the essence: the resolution is low, the color rendition is good, but at the edges the picture it turns out very noisy, which is especially noticeable in the second image. AI employs including the sharpness of remote objects, which is why color shifts and irregularities appear on the frame.

But the subject photo on the contrary - the Joy 3+ is given very well. Here we have a riot of paints, and each separately taken the fruit is digitally and without a single artifact. On the second frame, the most "smart allocation of objects". The pen in the foreground II allocated excellent, but the second also hooked a little.

The result of a portrait shooting of a shaggy object is at a satisfactory level. Soft camera allows you to switch in real time between five degrees of blur, but unfortunately, does not allow me to make a widescreen picture. 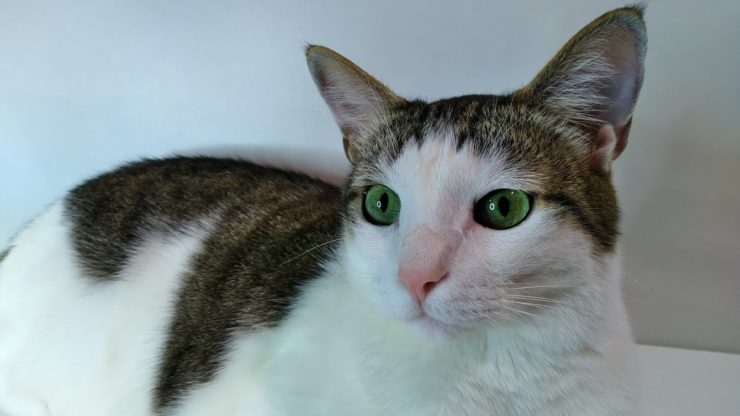 And here my cat stays in the twilight and shooting in the mode of muted light. AI greatly brightened and crawled the frame, while retaining the high clarity of the image.

The selfie camera is the most ordinary and not very presentable, but even here, with the support of smart technology, you get nice portrait shots modified with customizable beautifiers.

Video capabilities are also very modest, but there are functions of slow and fast frame, capture at 60 FPS and even some kind of time-lapse.

Joy 3+ is powered by Vinsmart, the first Vietnamese VOS based on Android 10. But not you should treat it as a separate environment, like MIUI with a bunch of additional features.

Of the pre-installed applications from the manufacturer, there are only Vsmart App, created to check warranty data and communicate with the technical department, and an ordinary VMessage SMS / MMS center. 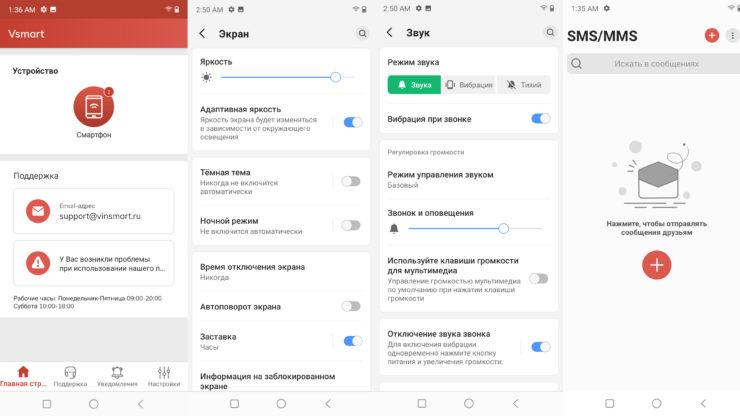 The inner world of the device is incredibly simple and concise. Only the most basic applications are preinstalled on the smartphone, full Russification has been completed, the start-up setting is not overloaded with functions. Pure Android lovers should love this.

In almost every section, it feels like the Joy 3+ has been designed with new user comfort in mind. These are minimalistic wallpapers, and large application icons, and large fonts, and underlined large numbers when dialing a number or pin code.

The developers position VOS as an environment with a convenient and intuitive interface and even provided modes for simplifying some parameters, when enabled, the system will take over the fine-tuning, but leave the last word to the owner. Here you can also bring your favorite contacts through the built-in widget straight to the main screen. All these solutions can be very useful for older people, because for many of them communication with smart phones is really not easy.

Among the pleasant features of VOS, I would also like to highlight the support for Dual App - the function of cloning applications, which cunning and privacy zealots appreciated back in the MIUI environment.

The so-called “everyday productivity ” did not cause any complaints from me. Smart loads pages on the Web very quickly, switches between running applications with minimal delay. I did not find any problems with hardware or software for an incomplete week of operation.

Gaming performance is quite satisfactory. The same Call of Duty Mobile on simplified and even medium settings goes without a single drawdown in FPS. But do not expect the smartphone to handle, for example, Genshin Impact just as effortlessly.

Joy 3+ is powered by a powerful 5000 mAh battery. The capacity is impressive enough so that when you continuously listen to music or watch video content, you don’t have to worry about the lack of energy during the day.

Resource-intensive applications, of course, drain the battery much faster. In addition, they provide it with strong heating, which is, in general, the scourge of most modern and not only budget smartphones.

Fast charging is Qualcomm's Quick Charge 3.0 (18W) technology, which is now supported by most flagship Snapdragon chipsets. It took me about a couple of hours to fill a completely discharged battery.

The sound in the supplied headphones is surprisingly rich, accompanied by a good dynamic range. A wireless headset also works confidently, but here you need to understand that a lot will depend on the listening device you use. But the dynamics of Joy 3+ are weaker than we would like. They sound loud, but they lack volume. That is, an alarm clock or a call you definitely won't miss, but listening to music, watching movies or playing games is best in good headphones.

Declared support for IEEE 802.11 a/b/g/n, where n is the most common, backward compatible standard for Wi-Fi networks broadcasting at frequencies of 2.4 GHz and 5 GHz. At the same time, Joy 3+ only works at a frequency of 2.4 GHz. The NFC module for making contactless payments is functioning properly.

But, unfortunately, it does not support Bluetooth 5.0, so you will have to be content with the earlier modification 4.2, which works much worse in an environment overloaded with signals. And this is unfortunate, given Vinsmart's ambitions to create its own ecosystem based on the Internet of things.

The microphone of Joy 3+ is quite good, if it captures extraneous sounds, it does not focus on them. At the interlocutor, there were no complaints about the quality of my voice, and I also heard him excellently. Check in really noisy conditions. The possibility did not introduce it, but I think there should be no serious problems here. VSmart Joy 3+ - Uniquely interesting model of the smartphone with a very pleasant for Familiarize the environment and surprisingly good performance. In something inferior, in something surpassed, he definitely fits into the category of smartphones for 10 thousand rubles, but equipped and looks like a modern majority of competitors.

In performance, it, for example, wins a bit of the nearest price competitor Xiaomi Redmi 9C and even bypassing the most interesting Honor 9a, which costs a thousand rubles more expensive. In this case, JOY 3+ supports the modern interface USB Type-C, against microUSB rivals, and has 4 GB of RAM against three gigs in 9C and 9A.

If you are seriously thinking about buying an inexpensive phone based on Android 10 for everyday use or you want to instill a new gadget of an elderly relative, then I strongly recommend you to look at the VSmart product.

The best books for reading books on Android