Vernee introduced a new smartphone for travelers, factory workers and lovers just to break everything.

You can straighten with an iPhone of the last model, but it is worth it once to drop such a device in a puddle - and he will immediately turn into an expensive rhylad, which is no longer going to see without tears. Therefore, the protected devices of modest, little manufacturers in Russia are becoming increasingly popular. Users believe that if we overpay, then for reliability, and not for the recognizable trade icon.

The company Vernee Takes the second attempt to conquer the "protected" segment, and "beats a bunny" - the first apparatus of the company with protection, Active, came out a little more than six months ago and did not have time Covered with dust on the shop windows. The new Vernee V2 Pro is a completely different level. Including at the price - it is worth the device about 17,500 rubles (depends on the store). But it is enough to look at the characteristics, and you understand that on the wrestling scale it takes place somewhere between Bear Grill and Chuck Norris.

We checked the device in the case and are ready to share results with you.

absolute zero. The device is packed in a square white box made of cardboard, so thick that it does not slip, no matter how hard you press it with your fingers or palm. The design is extremely ascetic, but this is rather a plus - the packaging looks stylish and unusual.

Inside the box, in addition to the gadget itself, are:

There is no cover, as well as a protective film, but when you see the V2 Pro gadget, you understand that these are redundant accessories for it. 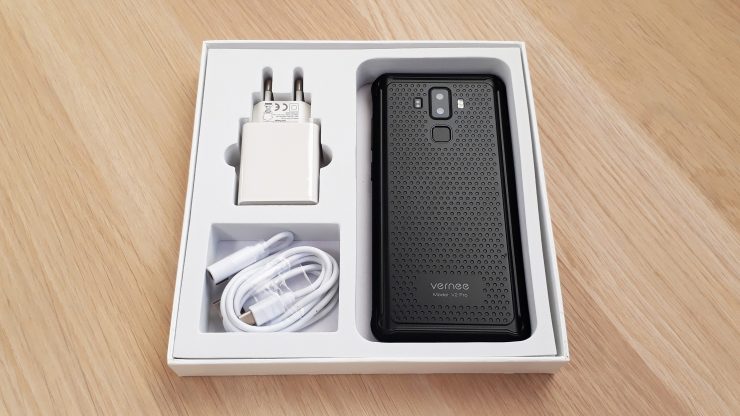 The user who had no protected smartphones, can shock the dimensions of the VERNEE V2 Pro apparatus. The device weighs over 250 grams, has a thickness of almost 13 mm. The miniature hands do not have completely no chance to reach the thumb to the remote corner of the screen. But despite the fact that the gadget is frankly bulky, it is impossible to reproach him in the alaya - it looks not repulsive, but, on the contrary, intriguing. 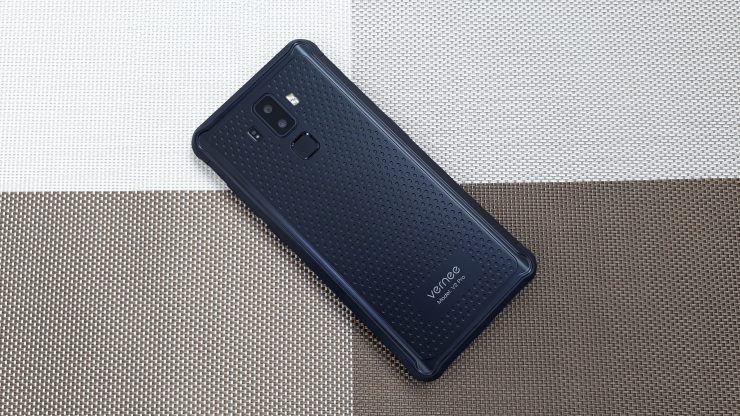 at V2 Pro minimum rubber Elements - thermoplastic polyurethane are covered only the corners of the case. The back cover is made of plastic with a fine-point texture, designed to reduce the risk of slipping a gadget from hand. Of course, plastic is not normal - according to the manufacturer, this is a military level material, withstanding 1000 (!) Power tests. Side faces are strengthened with metal inserts.

VERNEE V2 Pro is protected by certificate IP68. It is capable of working in the temperature range from -30 ° to + 60 °, it will endure the immersion in salty water to a depth of 1.5 meters (where it can stay for half an hour), cope with the underwater shooting. It is absolutely impenetrable for dust and sand, the shower is also not terrible. The front surface is covered with a shockproof glass Corning Gorilla Glass with rounded edges.

Placing mechanical elements on V2 Pro is far from traditional. The device is devoid of a standard connector for connecting headphones, so the upper edge is absolutely empty. Only below the connector USB Type-C, to which the headphones are just and you can pick up (using the adapter from the kit). Right - massive "POWER" keys and volume control. On the left there is an additional button, with which you can quickly do screenshots or photo (depending on which application is activated). Also on the left side of the SIM card and flash drive slot, which can be removed without a needle - just picing the nail. The slot is combined, so put 2 sims and the flash card will not immediately work.

The quality of the assembly to the device cannot be any complaints. You will spend the clock in search of some minimal flaw, but all this will no avail. All components are perfectly driven to each other - the backlash and gaps are not found.

FullHD-screen V2 Pro Diagonal in 5.99 inches occupies over 81% of the front surface. The image quality on displays covered protective glasses, there are often complaints, however, it does not apply to a novelty from Vernee. The picture on the screen is amazingly clear and remains such as an angle on it no longer look. Watch clips in HD quality - real pleasure.

Disappointment was that only one image parameter is adjusted - brightness. Contrast, color temperature, white balance and other parameters set up "for yourself" will not work. There is a useful feature " Adaptive brightness", which allows you to save the battery charge, but " reading mode" is missing - which will surely upset the booklers. V2 Pro electronic "reader" is not an alternative. 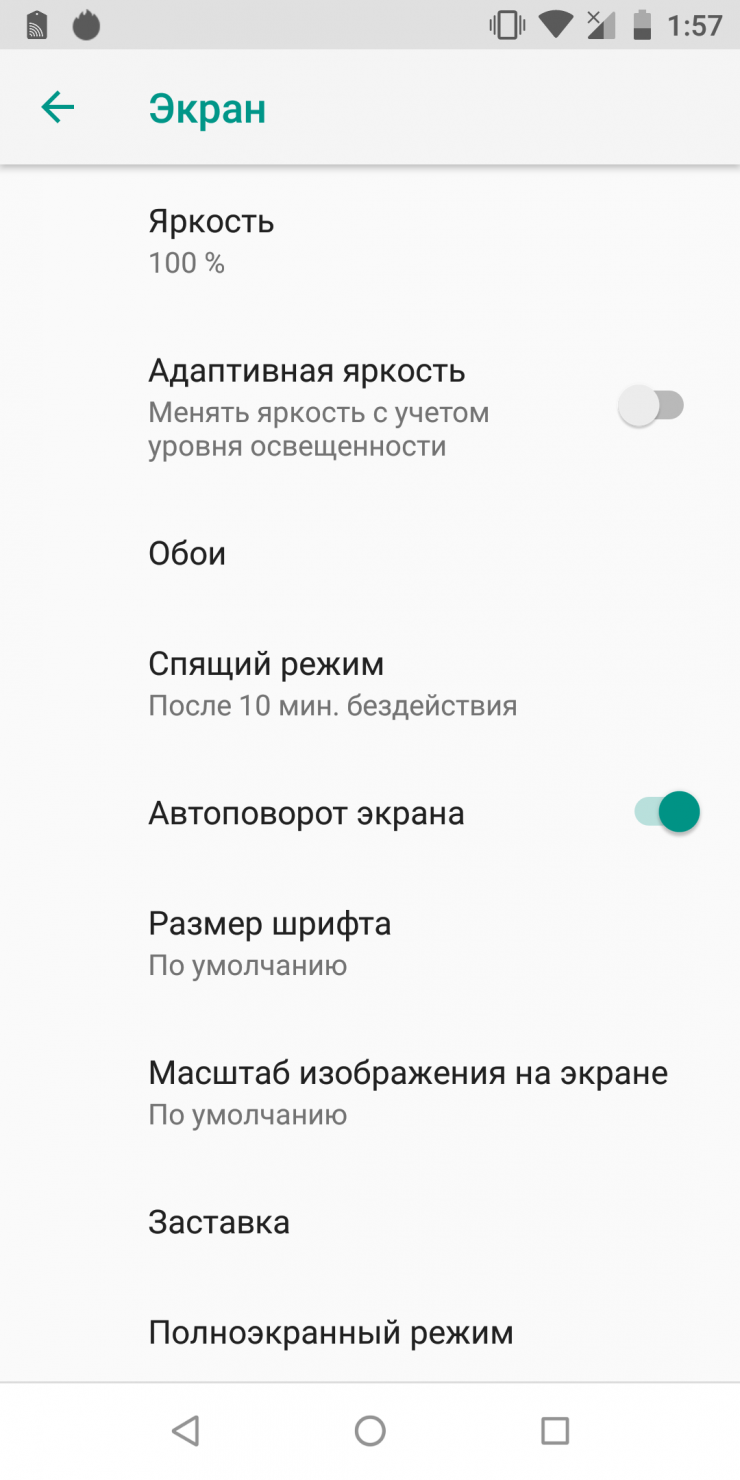 If the manufacturers have chased megapixels before, now this race has come to a new level - now in priority Number of cameras. VERNEE V2 Pro has their whole 4 - 2 in front and 2 rear.

The main unit cameras have permissions of 21 MPIX and 5 MPIXs, differ in fast phase autofocus (it works in 03.03 seconds), as well as the F / 2.0 lights. In the bright time of the day, pictures on the back chamber are obtained very clear and juicy - not every pro will be able to find flaw. But when shooting under conditions, the lack of light is flawed and rushing into the eyes - the clarity is no longer the damned fragments appear.

These problems will certainly succeed, "kicking" in the photo settings - Before there is Pro mode, for the study of which you can kill the clock.

The front camera is impressive only by the resolution of its photosensors (13 MPIX and 5 MPIX), but the result disappoints. It is clear that the apparatus is designed for such an audience, which all these fashion trends with vague "on side", but in this case, why were the second lens?

With the speed of Vernee V2 Pro problems, there is no problem - it is quite expected to consider that the device is already 6 GB of RAM. Custom memory is also plentious - 64 GB in theory, 54 GB in practice (almost 10 GB is occupied by system files and built-in applications). Memory can be expanded by installing a flash card MicroSD (up to 128 GB), but in this case you have to sacrifice one of the sims.

The chipset is the 8-nuclear MediaTek Helio P23 (it is MT6763V), manufactured according to the 16-nm technical process. You may relate to "pebbles" from MTK with prejudice, considering that Snapdragon processors are not an opponent. We will not persuade you - just give the facts. In , the benchmark Antutu Vernee V2 Pro scored almost 80,000 "Parrots". This is a very worthy result for the average price segment.

When testing in games, V2 Pro also showed himself well. Testing 3D fighters has passed on "excellent": in Tekken there are no lags in Mortal Kombat x only at the time of the fulfillment of Fatality. Fresh Asphalt 9 went "like oil".

Vernee V2 Pro is running Android Oreo 8.1 with the branded VOS manufacturer - which, To be honest, we like it madly. There are several reasons for that:

and finally - VOS does not have built-in advertising applications, littering memory. Only a starter package, without which it is impossible to pass certification.

The sensor suite on the V2 Pro is just gorgeous. The device is equipped with:

Impressive, isn't it? It seems that the developer managed to equip the device with all the sensors that are known to the theory of modern smartphone construction.

Vernee V2 Pro is moderately loud. The developers have worked hard to make the sound as good as possible without the use of any special software and outlandish technologies. BesLoudness, a standard solution for Android, is responsible for improving the sound on a smartphone. 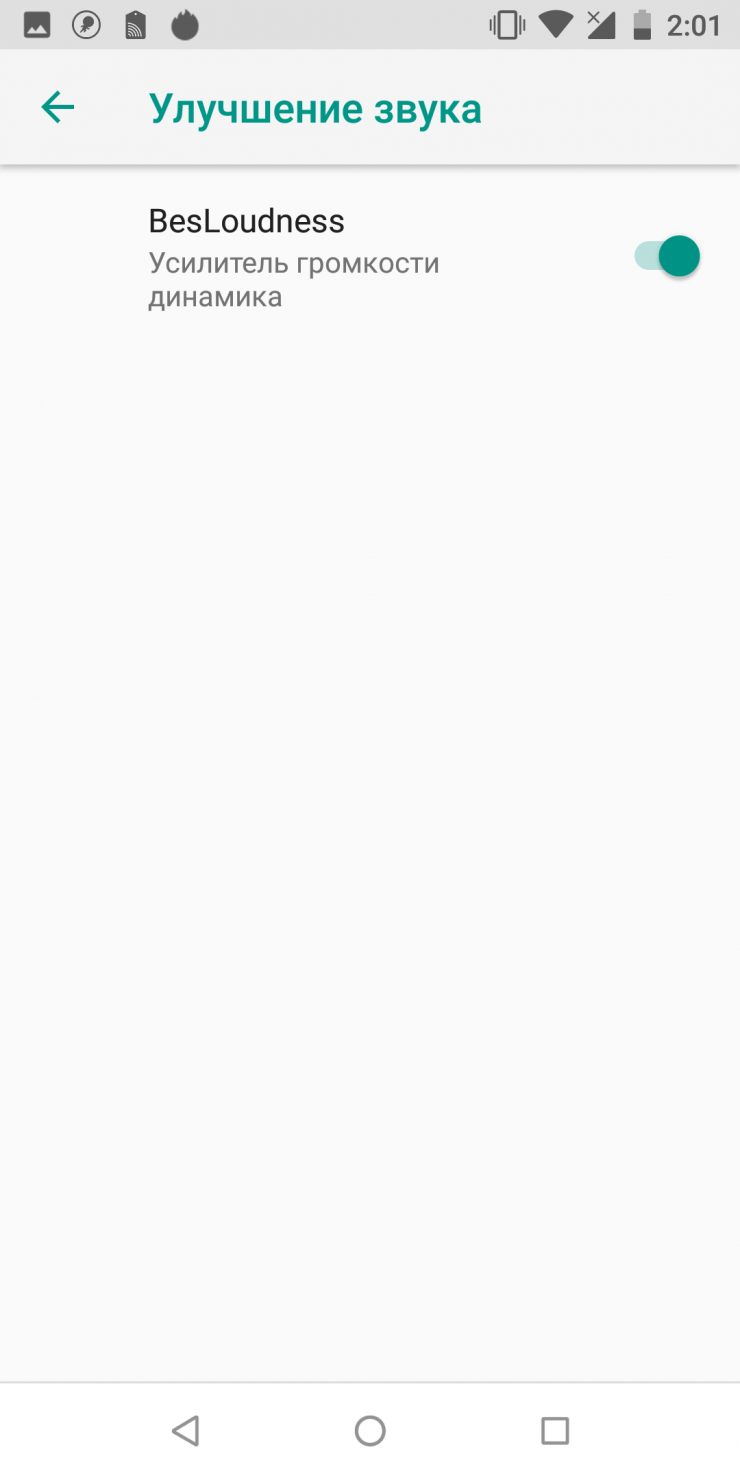 The “extra weight” of the device is more than offset by its remarkable autonomy. The V2 Pro is backed by a massive 6200mAh battery that can't be light. According to the manufacturer, the smartphone is able to "stretch" without recharging:

According to the results of the tests, it became clear that the manufacturer does not dissemble and does not embellish the facts. If the gadget is not strained with games and runs through benchmarks, it really works on a single charge for at least 3 days. And with activated through the settings " of the power saving mode" even longer - although in this case some functions (for example, geolocation) are not available. 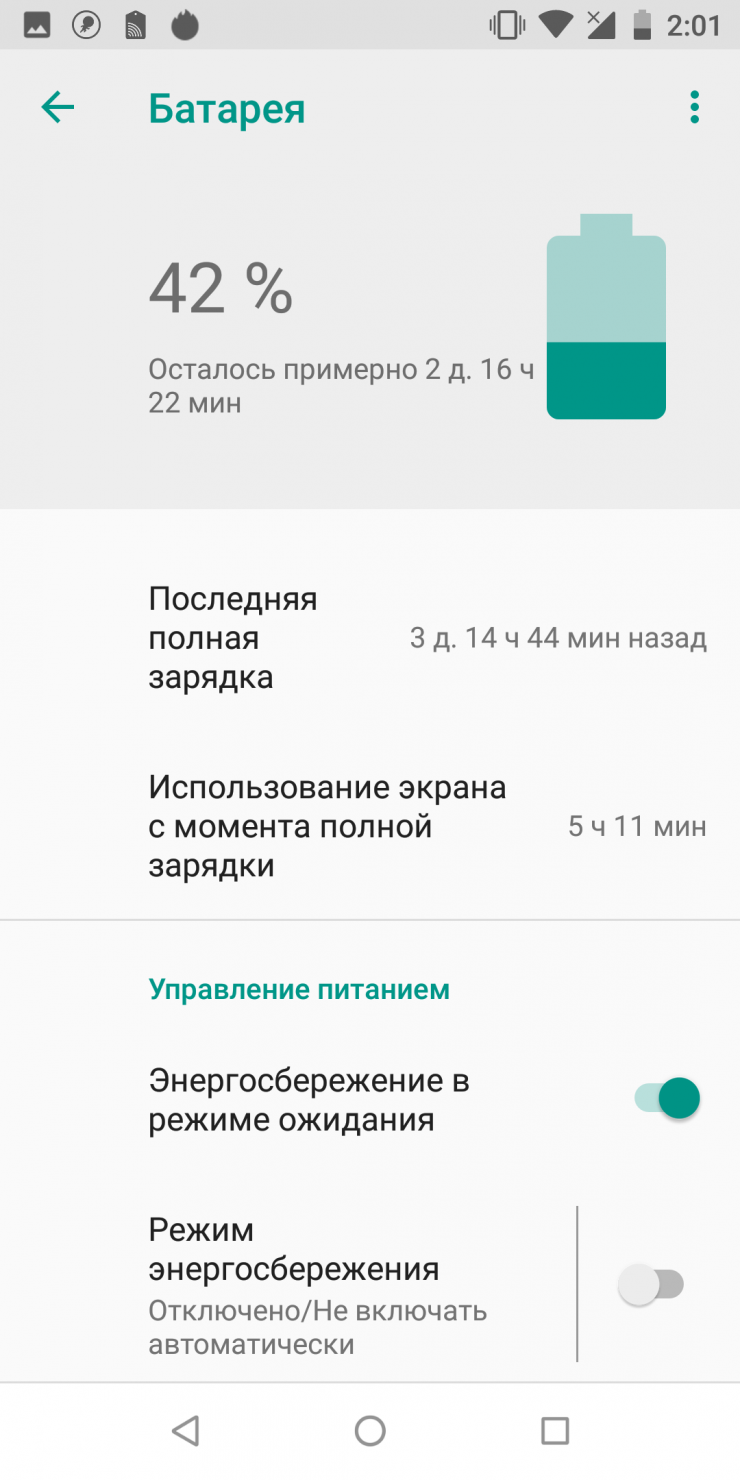 Your humble servant never kept another smartphone in his hand, which would also like the trumpet weapon as Vernee V2 Pro. There is confidence that now after the nuclear war will survive not only cockroaches. However, V2 Pro is not only about how to protect yourself at night from the britheads of well-headed or caused a bell, being in a belt in the tin tropical swamps. And in the conditions of ordinary office everydays, he can give the user everything needs what it needs. 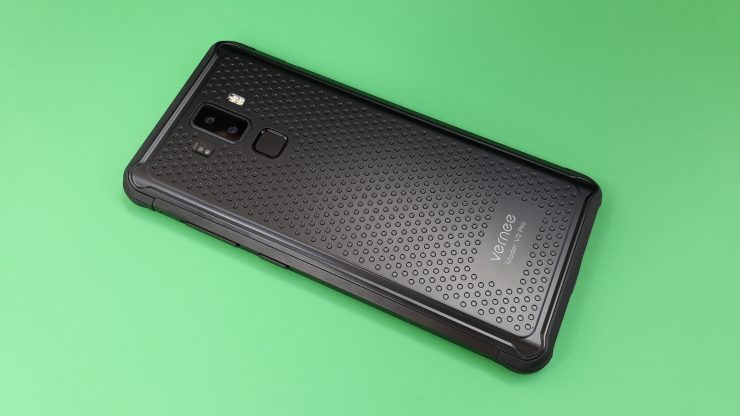 Among the main advantages of the device:

Disadvantages of the device are as follows:

V2 Pro - it is like Jeff Monson. He only seems to be a brutal killer, and get acquainted closer - you know the master's psychology in it. V2 Pro is dressed in armor, but its defense does not go to the detriment of the functionality. Unfortunately, among the protected smartphones, there are units for so far.

DOOGEE X95 PRO smartphone review - without armor, but with character

How to eliminate overheating laptop?

Where better to buy iPhone?