Apparently, the M-line Vernee claims to be the most stylish of the budget lines. The M6 ​​is even more attractive than the slim M5.

Mobile equipment from China is getting cheaper at such a rapid pace that it is sometimes even scary. Just a few years ago, the appearance of a budget phone with 4 GB RAM seemed like a utopia - and now in 2018, the company Vernee is developing its M-line with might and main, which includes several devices with the named volume RAM.

In March, the company introduced a new model Vernee M6, which costs about 9 thousand rubles. The smartphone looks like a "twin" of the "predecessor" M5, but it has a larger screen. What the Vernee M6 can offer the user and how much it corresponds to the “zeitgeist”, we will tell in the review.

Vernee M6 came to us in a dense cardboard packaging, decorated minimalist. A white box with a company logo is nothing superfluous.

Open and see: the smartphone inside is already wearing a simple silicone case, designed to prevent the appearance of scratches in the first stages of use - until the moment when the owner is able to find a more pretty accessory. 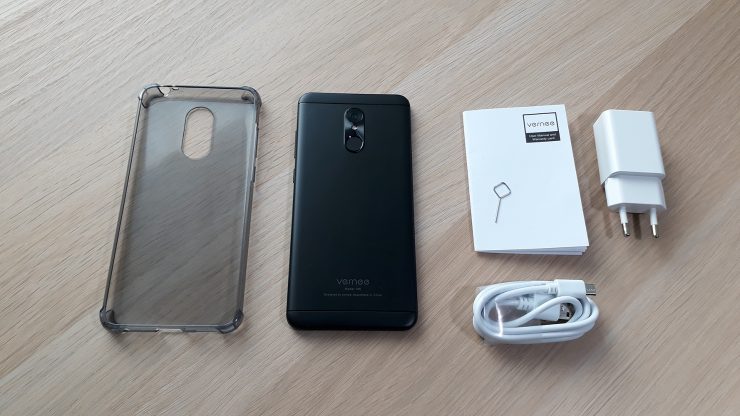 The cover in the kit is not the only surprise. Also in the box there is an original film - another one besides the one that has already been pasted on the screen. The rest according to the standard:

impresses the design of the paper clips. The manufacturer departed from the standard installed by Apple, and made a clip in the form of a key. It would seem that a trifle, but users will surely appreciate the advantage of such a creative move.

Equipment for Vernee M6 is more than worthy. All accessories "First need" can be found inside the box

In the reviews, users accuse Vernee in a shortage of radically new ideas - they say, company designers Did not find anything better than copying the appearance of the previous lineup model. Although it is not clear why the design of M5 is not considered enough - after all, the 5th generation model came out a few months earlier than M6.

Except in the absence of the originality of Vernee M6 from the point of, the design is nothing to reproach. Ergonomics of the apparatus are called one of its main advantages. The gadget is very light and thin - despite the fact that it is made of metal. 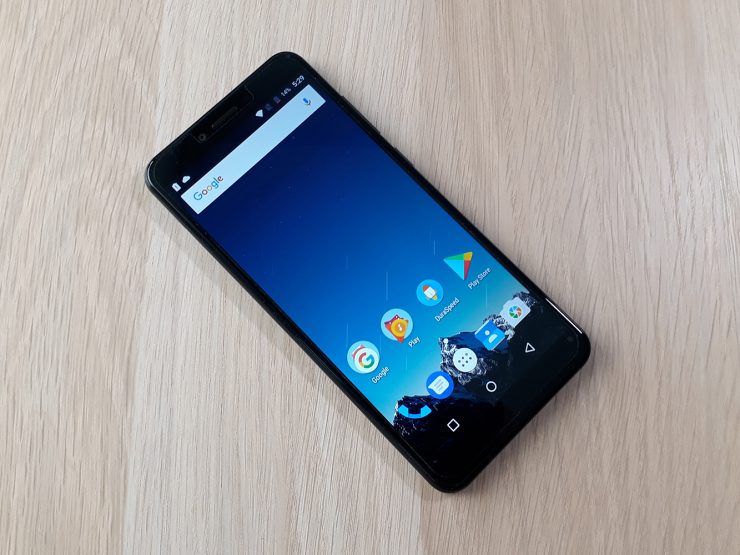 The thickness of the housing is only 6.9 mm. However, this did not prevent the developer from equipping the device with a 3.5 mm headphone jack. The connector is located on the top edge of the device.

The arrangement of mechanical elements and buttons is absolutely standard. On the right edge are the power and volume keys. Both have an excellent course, do not "stick" and do not rattle. On the left is a Nano-sized SIM card slot. The slot is combined - that is, in order to expand the memory using a flash card, one of the SIM cards will have to be removed. Finally, on the bottom is the connector MicroUSB and holes for the speaker and microphone.

In addition to the camera and LED flash, there is a fingerprint sensor on the back. It is located quite conveniently, so that a person with hands of any size can easily unlock the device with a fingerprint.

The Vernee M6 is available in black and blue.

The display is perhaps the main advantage of the Vernee M6. The bezel-less (bezel-less) technology that the M6 ​​has come up with seems to work wonders. How else, if not a miracle, to call what the "predecessor", the M5, with approximately the same dimensions of the case, had a display with a diagonal of 5.2 inches - that is, half an inch less?

The M6 ​​screen has an aspect ratio of 18:9. Vernee calculated that due to this, the display area increases by 12.5% ​​- when compared with 5.5-inch devices. The screen of the novelty from Vernee occupies 81% of the frontal surface. This is a very good result: for comparison, the flagship Samsung Galaxy S8 had a slightly higher figure - 84%.

A pleasant surprise was that the smartphone supports MiraVision technology. Thanks to it, the user can adjust the clarity, brightness, saturation and other image parameters on the display as he sees fit. The main thing is not to go too far, otherwise you won’t be able to look at the screen without pain.

Skeptics expressed doubts about the fact that the picture on the screen Vernee M6 will be high-quality. Still, the resolution of the HD + screen with a diagonal of 5.7 inches gives a very large pixel density. However, due to the use of a graphic "improviser" Miravision and a high-quality IPS matrix, the manufacturer managed to avoid the negative effects of low PPI.

Despite the large amount of RAM and 8 nuclei, Performance can not be called a strong feature of Vernee M6. The gadget is equipped with a MediaTek MT6750C chipset and, according to the manufacturer, more powerful than the previous M5 model by 40%. However, this is not enough to cope with heavy games at least in the middle settings.

According to the results of testing on Antutu Vernee M6, 50,982 "Parrot" scored. 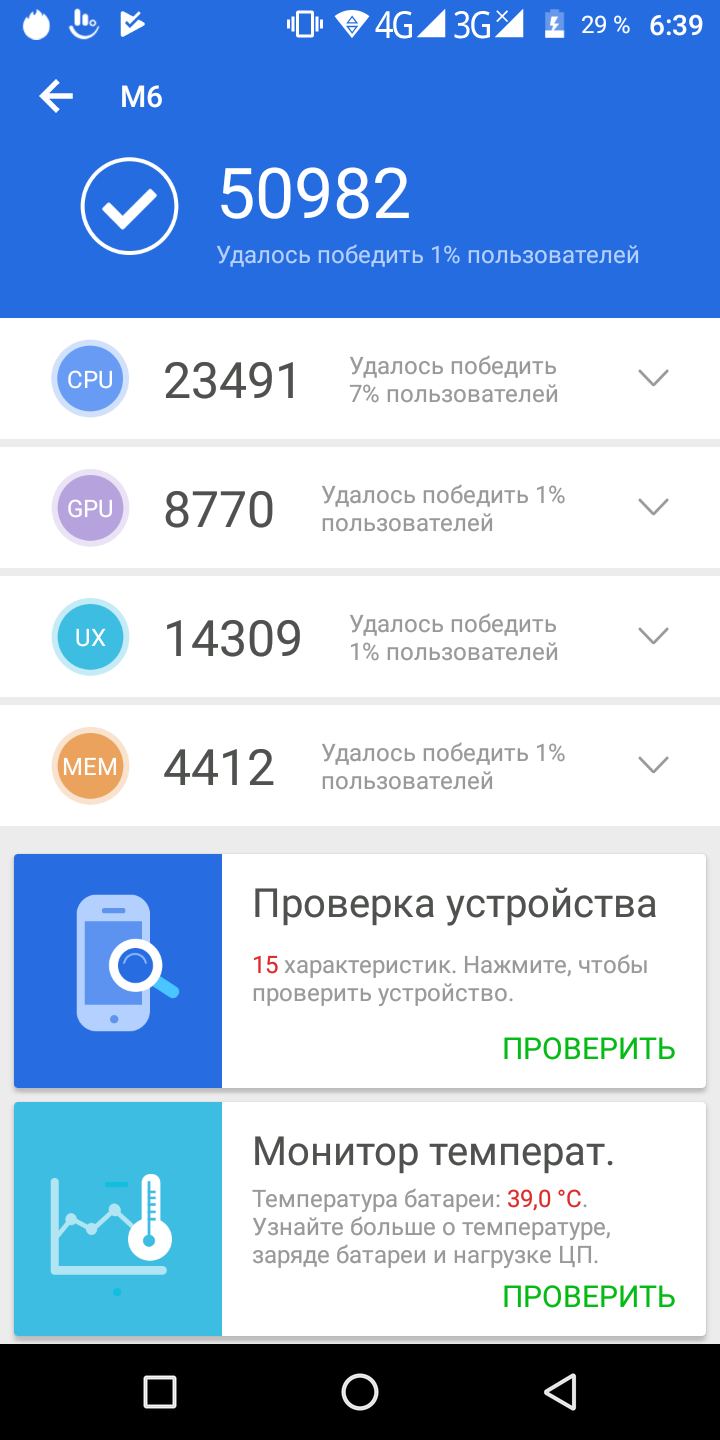 This level ASUS Zenfone 2 and Meizu U20. Note that in the same price range you can find more productive devices. For example, model Xiaomi REDMI of the 5th generation and LEREE LE3. M6 is inferior from the point of view of power and another new product from Vernee - MIX 2, the review of which we recently published.

Geekbench also makes it clear that the performance of the apparatus leaves much to be desired. M6 scored 595 points in single-core mode and 2470 in multi-core. Approximately the same results at their time showed the Samsung Galaxy S5 and OnePlus of the very first generation itself.

"Test drives" in the games confirmed the data of the benchmarks. Vernee M6 shows well in the fights - for example, C " Tekken" There were no problems at all. But in the races " Asphalt 8" and " Need for Speed: No Limits", the smartphone has shown himself in the best way. The picture on the screen hangs noticeably.

Vernee M6 is running the VOS version 1.0.0, which, as indicated on the manufacturer's website, actually represents "tunned "Android 8.1. In fact, the "firmware" on the basis of the 8th android is not at all on all the smartphones of the model. Our sample, for example, worked on Android 7.0 modified.

As for the proprietary shell VOS, the reviews about it are entirely positive. The operating system is excellently optimized, rid of all elements that could slow down the performance of the device. The "chips" of VOS are considered to be an effective power saving mode, a convenient control center and a gesture recognition function. A curious feature of the “firmware” is that you can open the Google search engine with a swipe from bottom to top in an empty space. This is quite difficult to get used to, so the buyer should be prepared that the first time the search bar on the screen will appear constantly.

The Vernee M6 has a 13MP main camera and an 8MP front camera. Although the specifications usually give completely different data - 16 and 13 megapixels, respectively. It's all about interpolation: the smartphone can programmatically increase the resolution of the pictures taken.

Photos with the rear camera are of good quality. We especially note the naturalness of color reproduction.

Here is a video taken with the Vernee M6 camera:

However, if natural colors are not pleasing and obviously not suitable for Instagram, you can quickly apply a filter or edit image characteristics (light, color, details, etc.). other). There are a lot of "krutilok" and toggle switches in the editor - it's easy to get carried away and spend much more time on proofreading than expected.

Pictures taken with the front camera are no less clear and natural than those taken with the main camera. At least, if you don't use the built-in beauty effect, which smooths wrinkles so much that you look a bit like Fantomas. Unfortunately, Smartphone M6 It does not support the transfer of data on Wi-Fi at a frequency of 5 GHz - only 2.4 GHz. Although in fact it gives much less discomfort, which is told by the manufacturers of expensive Wi-Fi adapters. The connection speed is high enough, the connection itself remains stable.

4G network support both slots under SIM. The M6 ​​uses TDD technology - that is, the incoming and outgoing data streams go alternately on one strip. The smartphone operates in the B20 range (frequency of 800 MHz) - this means that it will certainly be able to find a 4G network even in the most remote corners of the country.

Vernee M6 does not support NFC - contactless payments are not available. However, download Google Pay and attach a bank card. In this case, it will be much easier to pay for purchases on the Internet.

The smartphone is equipped with the Besloudness sound improvement function. We met such a function on many Android devices, however, Vernee M6 is the only phone on which Besloudness does sound worse.

And without any "improviser", the gadget sounds more than decent - loud and purely. Balance between low and high frequencies is selected wonderful. But it is worthwhile to activate the Besloudness toggle switch, as high start to write, there is a lack of bass. For Melomanana, this will become a real test, so that the user prone to the audiophilia is recommended to forget where the sound settings are.

Vernee M6 demonstrates impressive autonomy. According to the manufacturer, one battery charge is enough to watch the video of 13 hours, without interrupting. In standby mode, M6 breaks 10 days before appropriate.

The key to the good autonomy of the device is not at all the battery capacity (although the indicator is solid), but an optimized "firmware", about whose advantages we have already told. The user, climbing in the settings, can find 2 modes: " Energy saving mode" and " Energy saving in standby mode". Signs of action of the second mode of the user will not notice - the energy saves when the smartphone does not use. If you activate " power saving mode", autonomous work will increase, but what sacrifice? Vibration, geolocation and background data transmission will be disabled.

Power Save Mode ". The results were as follows: with active use (implying Internet surfing, VKontakte communication, listening to music and 20 minutes of playing races in the subway) on a smartphone that was 100% charged in the morning, 15% remained by midnight. 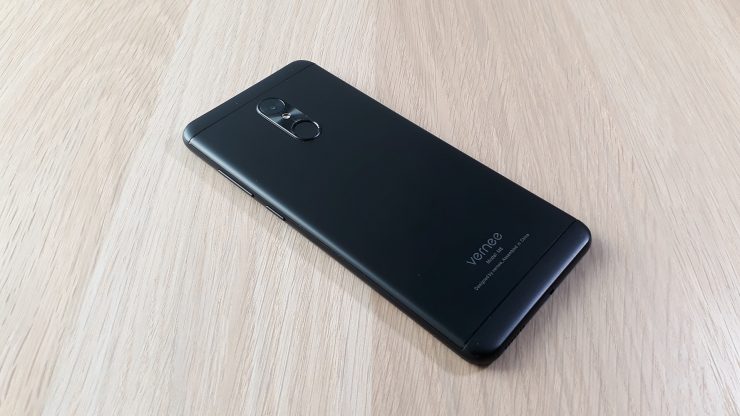 the score, comparing with the top flagships, turns out to be very large. Although it is obvious that if the gadget belongs to the budget segment and you do not have to take a loan to buy it, it will have disadvantages. And the Vernee M6 has flaws - but they are clearly less than the advantages.

Among the advantages of the device are:

The disadvantages of the smartphone are as follows:

We won't say that Vernee M6 really surprised us. The new smartphone of a young Chinese company cannot boast of something outstanding. But that doesn't mean he's bad. For a £9,000 phone (spring 2018), the M6 ​​is pretty generously equipped with features, plus it runs the well-optimized VOS, which means it can go a long time without recharging. With the role of "workhorse" for every day, Vernee M6 copes with "5+"!