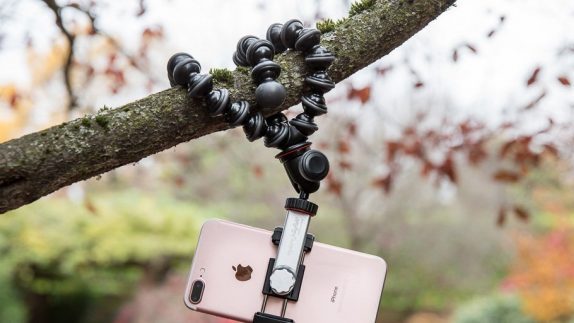 Currently, almost every flagship has a camera with several lenses that allow you to make creative and impressive snapshots. But even if you do not have the newest smartphone, you can improve the photo using a special tripod.

In this article, we will explain that they represent themselves how to use them and which of them are best suited depending on your desires and needs.

What is a tripod for a smartphone?

Tripod is Stand with three folding legs intended for the placement of photographic equipment. The device is fixed around the central rack for maximum stability and is equipped with a fitting for a smartphone or a camera from above, as well as several hinges that allow you to rotate and tilt the phone.

The biggest difference between the tripod for the smartphone and the DSLR-camera is that the latter is usually more and stronger, since the weight of the camera and additional lenses is much higher than that of a smartphone. However, the main functions they perform remain the same: the stabilization of the device and the ability to make good pictures from different angles.

There are different types of tripods:

Why should I use a tripod?

If you simply enjoy photographing from a smartphone as a hobby, you can wonder how the tripod helps. Maybe you have a rather stable hand, however, the truth is that a tripod can raise your photo skill to a substantially new, high level. It allows you to make a lot of beautiful pictures and videos that you can never do with hands. Let's figure out the main reasons.

We've all seen these stunning photos of the lights of passing cars turning into streams of light. This effect is achieved with a long exposure. You can take these shots in manual or professional smartphone mode, but for really good results, you need a smartphone tripod. Why? Most photographs are taken at shutter speeds between 1/600th of a second and 1/4000th of a second, although in low light this can drop to 1/200th.

On the other hand, long exposure shots require the shutter to be open for at least a couple of seconds while the phone is completely stable. Usually this is not possible if you hold a smartphone in your hand. Even the most steady hands will move slightly, which in turn can result in a blurry shot. With a tripod and a little experience, you can surprise your friends with beautiful long exposure photos.

photo at night or in low light

As with long exposure photography, one of the best ways to take great pictures in low light or at night is to use a fast shutter speed. Even if you don't use manual mode for night shots, but opt ​​for night mode, which can be found in the camera app on most devices, it's by no means perfect. That's why a smartphone tripod is the best solution if you want to take breathtaking night photos. This will help reduce noise and blur.

Even a Google Pixel 4 or 4 XL with its amazing Night Sight mode, which uses powerful built-in software and mixed exposure, can benefit from using a tripod. Moving subjects are one of the few things (if not the only) that Night Sight has trouble with, but with a phone tripod, you can turn your Pixel night photos into great ones.

If there is one element that has greatly improved in the field of mobile shooting over the past couple years, then this is zooming (zoom). We now have amazing technology like 10x hybrid zoom on OPPO, amazing 50x digital zoom on Huawei P40 Pro and incredible 100x on Samsung Galaxy S20 Ultra.

However, from the videos showing the impressive capabilities of this technology, you can clearly see that at long distances, even the slightest movement of the picture becomes blurry. To avoid it, if you want to photograph, for example, every ridge on the Gothic Cathedral, you will need a tripod for a smartphone with a rotating ball head.

The best cropping and panorama

Panoramic pictures also benefit from if they are made on a smartphone installed on a tripod. Photos will be much more resistant with fewer cut areas. The tripod will make you think more creative. With the help of a tripode, you can take pictures from a variety of corners that would be impossible or impractical when you keep your smartphone in your hand.

Some tripods allow you to take photos at the ground level, for example, to crawl without the need. Installing the tripod also gives time to think about his picture and what you want to do. It will provide the opportunity to capture the exact mood and the atmosphere you want to see in the photo.

Probably, one of the best use of tripods is the shooting of any video. There is nothing worse than shaky frames that prevent you from focusing on something that is shown and told in the video. If you choose a lighter telephone tripod, it can be used not only for shooting videos in Timelapse mode, but also for video bugs on the go, as well as much more.

How to choose a tripod?

As mentioned earlier, there are various types of tripods that satisfy different needs. We will look at the three most common and explain why they are best suited, and we recommend some of the best models of each type.

This type of tripods is the smallest of all, and, as follows from the name, is best suited for use on a flat surface. Some models are designed for smartphones, while for others you will need to purchase a separate mount. They are usually easy and easy to transport, but use this device is best at home.

Do you strive to become a good influenser or streamer? Want to do an excellent selfie without hands in the frame? Then desktop truths are the best solution. They can also be used for Timelapse. If your balcony opens a beautiful look, just put your smartphone in the tripod and make a photo - whether the autumn red-yellow leaves, or winter snow, slowly covering the landscape. Desktop tripods are also great for video blogs, so if you plan to start your career on YouTube, this device is MUST HAVE. But what desktop tripod it is worth buying? We recommend familiarizing yourself with Manfrotto Pixi Mini Tripod. It weighs about 220 grams, and the maximum height reaches 16.5 cm. The tripod also has a universal clamp for a smartphone. It is durable, portable and folded form can be used as monopod for selfie. His main dignity? Price - it costs about 1600 rubles.

Tripod in the form of octopus with flexible legs

These tripods, often referred to as octopus, received their nickname due to flexible legs. They can be folded or adjusted by several ways and use to capture objects. This tripod is something average between desktop and more traditional tripods. It is light and portable, but usually the maximum height is less than that of traditional representatives.

Nevertheless, they are much more versatile than desktop. You can use the device at home to keep a video blog or do selfie, but you can also take it with you in travel. It is also possible to attach a tripod to the branches of trees, fences, pillars and other objects to get the perfect group photo and much more. 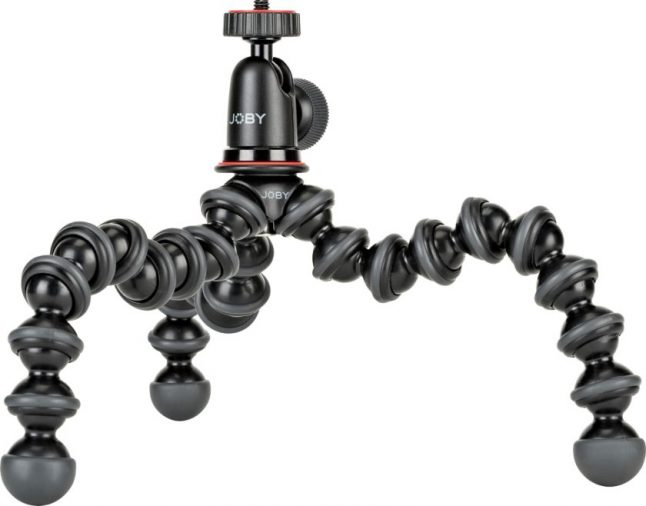 Tripod with flexible legs, which we recommend, this is a Joby Gorillapod 1K. It can be used both with cameras and with smartphones, while the stand and the ball head are included in the kit (although you can purchase a stand separately). The tripod is incredibly durable, but also portable, since only 0.43 kg weighs. On the other hand, its lifting capacity is almost a kilogram. This means you can use tripods with various devices, including tablets if such a need arises. Joby Gorillapod 1K is usually worth about 2,000 rubles, but you can find and cheaper. Nevertheless, the tripod has one drawback - the configuration is not included for the smartphone. You will have to buy it separately, but there are many budget versions, such as universal Manfrotto, which costs about 300 rubles.

We also recommend familiarizing with the Flexible Mount Tripod from Gekko. The tripod is very durable and flexible, with him you can arrange your phone at different angles. And he is completely inexpensive, which is also a plus.

When it comes to the photo, you will not be mistaken if you choose a traditional tripod. It provides maximum stability and height, and can also be used to shoot or photographing almost in any situation. Tripod is best suited for timelapse mode, landscapes and group portraits. However, this species, as a rule, is more expensive than the two previous ones, and often does not have attachments or clamp for the smartphone.

Traditional tripods may also be heavier if not made of lightweight materials, such as carbon fiber, which will increase the price even more. However, if your photo on a smartphone or other device is your serious hobby, a traditional tripod exactly what is needed.

First of all, we recommend you to familiarize yourself with the tripods from the German manufacturer HAMA. The brand offers several models, each of which has different maximum heights. The highest - 185-centimeter Hama Star-64, but for beginners we recommend the 166-centimeter HAMA STAR-63. The device can be reduced to 66 centimeters, it weighs 1.74 kg, a carrying case is for it. Universal fastening for the smartphone is not included in the kit, it will have to be purchased separately, but it will not bring the big waste, since the price of Hama Star-63 is very small - only 1.5 thousand rubles. This is one of the best entry-level tripods that you can buy.

If you want to get everything immediately, pay attention to the tripods of the WT 3120 and 3110 series. They are intended for use with a camera and a mobile phone, in the kit there are all the necessary mounts. These models also differ in low cost, they are compact in the folded state and have a movable head to select the most successful angle.

Note: We must mention that there are many universal tripods that can be used as self-stick and a tripode, but we cannot vouch for Their quality and durability. The same applies to some universal Bluetooth remote controls, which may have problems with connecting to your smartphone. That is why we currently excluded them from our list.

These were our advice on why it is worth using a tripod for a smartphone and which one is best suited for you. We did not include some excellent products on the list? Let us know about it in the comments and share your experience photographing from the tripod!

Apple is slowing down smartphones: what you need to know about this situation?

The best apps for podcasts

How to dry USB port in a smartphone