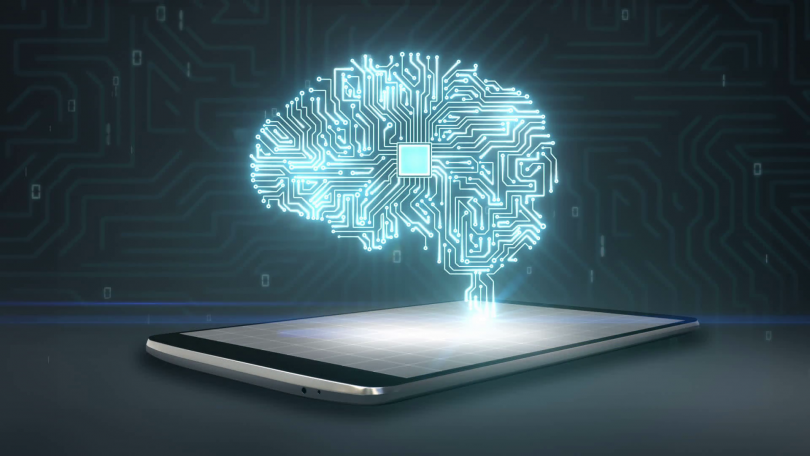 Artificial intelligence is one of the trends of recent years. Is there any benefit in its presence of a smartphone and which devices are most interesting in the modern market in our article.

annually Mobile manufacturers come up with new chips for gadgets to interest buyers. Starting from 2017, artificial intelligence begins to enter into the life of the owners of smartphones, and after a year, support appears not only in expensive devices, but also a medium-level device.

for which Need artificial intelligence

It is worth understanding that the analogues of the AI ​​were before, but then "intellectuality" was reduced to software solutions - there were various types voice assistants. Since 2017, processors have become equipped with a dedicated AI unit (reduction from Artifactual Intelligence), which solves a number of tasks at the hardware level. These include the following functions:

The work of artificial intelligence is not limited to this. The tasks can be attributed to the task AR applications, smart purchases, online translators and much more. But the most prominent results of users can still be seen in the above categories. It should be understood that all processes are simplified and in fact everything is arranged more difficult.

When choosing a smartphone with AI, it should be understood that today there is no lack of models. Their cost varies and think that the device for 15 thousand has the same AI, as well as a device for 60 thousand incorrectly. Moreover, the term "artificial intelligence" is wide and confused with "machine learning" or "neural networks" incorrectly. AI is the operation of the highlighted block placed in the chipseet. Machine training and neural networks are a collection of information and software processing that improves the speed of queries. A simple example of their action - the more often the user starts the application, the faster it will be loaded.

Many manufacturers in the release of devices are chitryat and indicate the characteristics of the availability of AI, but this does not guarantee the entire list of features. With a probability of 99% in low-cost AI smartphones, it is used to improve the operation of the chamber and face recognition.

In our top there were no popular devices such as iPhone xs, samsung S10, Huawei P30 and others Flags due to the fact that once again telling about their merits is boring and most readers are familiar with them. Instead, we chose several devices not so popular and in different price segments. It is worth understanding that each of them has their own capabilities of what we tried to tell a little more.

Blade V10 is an example of a device that all intelligence The chipset is aimed at improving the camera's work. In fact, there is no full-fledged AI and when buying it should be understood. The device received a powerful 32-megapixle frontal chamber with a photosensitive sensor and a double rear module 16 + 5 megapixel. According to user reviews, they perfectly copble with photography and this does not interfere with even the absence of good lighting. The front module has already familiar broofers today. They gently and imperceptibly improve the photo without making anime person. A rather good device manages to remove the video in the FHD resolution, there is a SLO-MO 120 K / s mode.

The rest of the model is quite typical for 2019 - plastic case, large IPS Display with with a drop-shaped neck, a diagonal of 6.3 inches and FHD + resolution. The smartphone received a hybrid slot for SIM cards, has a loud speaker, a modern Type-C, a headphone jack. Battery capacity - 3200 mAh, grabs on working day. Fast charge is not provided. To protect the data, a dactylconus sensor and face recognition is used. In the first case, there are no complaints, but the camera guess the user in 5 cases out of 10, and it does it not very quickly. Works smartphone running Android 9.0 PIE.

x8 went out late 2018. This is the first device Meizu with a cut in the form of a bang and on the Snapdragon 710 chipset. The company positions it as a gaming device due to by a powerful processor and a decent memory stock. The device really shows himself in Gaming, but this is not the only positive side, however, enough and minuses. In addition to high performance, the phone has an excellent camera. Here they act here the very algorithms, but, as in the case of the previous model, this is not a complete artificial intelligence. The rear chamber is represented by a double module 12 MP (from Sony ) and 5 MP (from Samsung). Front camera 20 megapixel. There are no complaints about photos, the smartphone is fine with the scenes and easily copes with shooting at night. It is pleasant to please the quality of the rollers in 4K with 30 k / s, there is SLO-MO 720p C 60 K / s.

The body of the device is a combination of metal and glass, a display of 6.1 inches with FHD + resolution. The device received a Type-C, a headphone jack, the slot is calculated on 2 sim, the connector for the memory card is not. The battery is 3210 mAh, there is support for MCharge, the total charge takes 75 minutes. Operating system - Andoid 8.1.

Xiaomi MI 9T is a new market that has become a simplified version of the flagship of the company with the new Chipset Snapdragon 730 (was presented in April 2019). The processor is updated Snapdragon 710. The nuclei configuration has changed - instead of breaking into two four, a combination of 2 + 6 is used, which gave an increase in performance by 35%. Snapdragon 730 is made on the 8 nm technical process, has an updated Hexagon 688 (block AI), which not only became faster, but also energy efficiently 4 times. Now, when performing the tasks, the battery sits down to this block.

If you transfer all of the above in the conversation about the smartphone, it perfectly removes and does not plant the battery. Many reviews show that batteries 4000 mAh grabs more than a day of viewing video with brightness 50%, you can play around 14 hours. Indicators are very impressive. At the same time, the manufacturer did not forget about rapid charging. The photo shows are represented by a triple module - 48 + 8 + 13 mp and a 5 MP retractable facial chamber. The device received a variety of useful modes for photography, and also supports recording video 4K C 30 K / s. All at a very worthy level.

In addition to the above phone, equipped AMOLED display 6.39 inches with a FHD + resolution and protection - Gorilla Glass 5. The print scanner is mounted in the screen. There are all modern wireless modules in the apparatus, including NFC. They did not remove headphone jacks, while the model has all the modern audio protocols, which makes it very interesting for music lovers. All this is seasoned with beautiful appearance, excellent performance and pleasant price for this assembly.

Honor 20 is not the only smartphone released on the KIRIN 980 processor, which is currently at Huawei top development, but quite affordable. In a new chip, a lot is aimed at AI technology. In order not to go into deep details it is important to note - the processor is powerful, optimized (due to AI and the new technology for calculating the application loads of the application open very quickly), energy-efficient (7 Nm technical process) and perfectly adapted to work with the camera. In particular, video processing and photo occurs in online mode, which significantly increases the speed of creating pictures and improves video recording.

Honor 20 is an interesting device from point of view iron (powerful processor, a lot of memory, all modern interfaces, battery 3750 mAh with quick charging), appearance (IPS FHD + display With a hole under the camera, the case of glass + metal) and prices. But the most interesting part is the camera. In this case, the manufacturer has installed a 32 MP facial module, which makes expected quality photos. But at the back there are 4 chambers at once - 48 Mp (AI stabilization), 16 megapixel (117 degrees), 2 megapixel (for bokeh) and 2 megapixel (for shooting Macro from a distance of 4 cm). Without stopping in detail on all features, it should be noted that the last module for macro photography is made rather for the grounding, since the main 48 megapixel copes with this task better.

The flagship from ASUS received at its disposal a new Snapdragon 855 chipset with a new cluster system of nuclei - 1 + 3 + 4, a neural block of the 4th generation, support 5G networks, 3D subeter sensor. At the exit, a powerful processor with low energy consumption is obtained, minimal heating, a number of protective technologies for custom and video and video processing "on ". However, the chipset is not the only reason Zenfone 6 hit the ranking of the best devices with AI. In many respects, this contributed to the excellent combination of parameters and prices.

The processor was said above, it is worth only to note that according to the manufacturer's statements a new neural block faster 4 times than in direct competitors Apple A12 BIONIC and KIRIN 980. The device received a very high-quality IPS display 6, 4 inches with a small cut under the speaker. The useful area is 92%, and the resolution of FHD +. The matrix supports HDR10. Gorilla Glass 6 was used to protect. The device has excellent memory sets, while there is a selected memory card slot. The manufacturer put all possible interfaces, did not deprive the gadget of the headphone connector. The model has a powerful stereo-speaking with 5 magnets and an intelligent amplifier. Microphones are equipped with noise reduction technology. There are support for Audiowizard technology to improve sound quality.

The telephone has a powerful battery for 5000 mAh with quick charging. Thanks to her, he keeps about 24 hours while watching FHD video. Finger scanner placed on the back panel, there is unlocking to face. The camera looks interesting. It is extended from the housing and can be rotated, which allows it to be used and as the main, and as a frontal one. ASUS did not become chased over a large number of modules and gave users only two matrices. The first 48 MP from Sony (it stands in Xiaomi Mi9 and many other devices), there is a lot about it, and so that it should not be repeated only to say that she takes out perfectly. An additional wide-angle module 13 MP with an angle of 125 degrees, in real time can remove distortion. Sometimes sinning when shooting at night, but it is not critical. In addition, there is a laser autofocus in the apparatus. Video can be removed in 4K. In general, the level of the photo is high, but still not the topmost.

Top smartphones with a powerful battery

How to listen to the radio on iPhone: top best radio applications

Stopped working Tachskrin on Android? We try to fix

The best smartphones with a removable battery

How to update the phone to Windows Mobile 10?