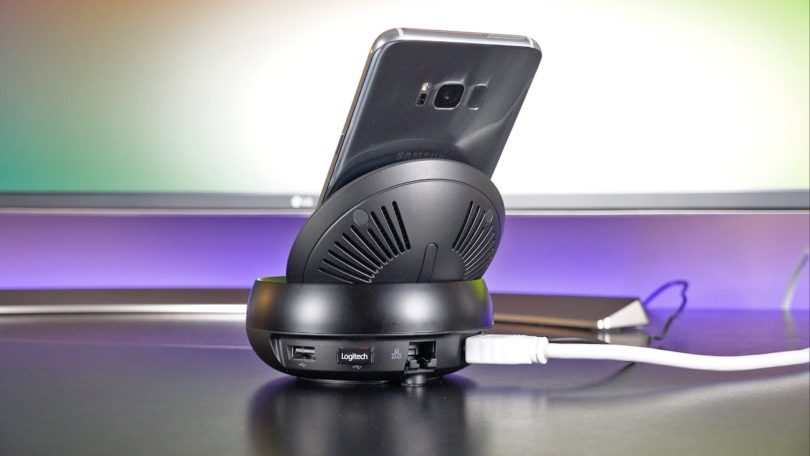 We present to your attention a list of the best docking stations suitable for use in a pair of CO SAMSUNG smartphone.

At the beginning of 2017, a unique device calledsamsung dexappeared on the light. It strongly popularized docking stations intended for smartphones. Below we will talk about the features of the Dex - a small gadget that turns the South Korean flagship into an analogue of the desktop computer. We are talking about other docking stations, the benefit of their range is quite large. 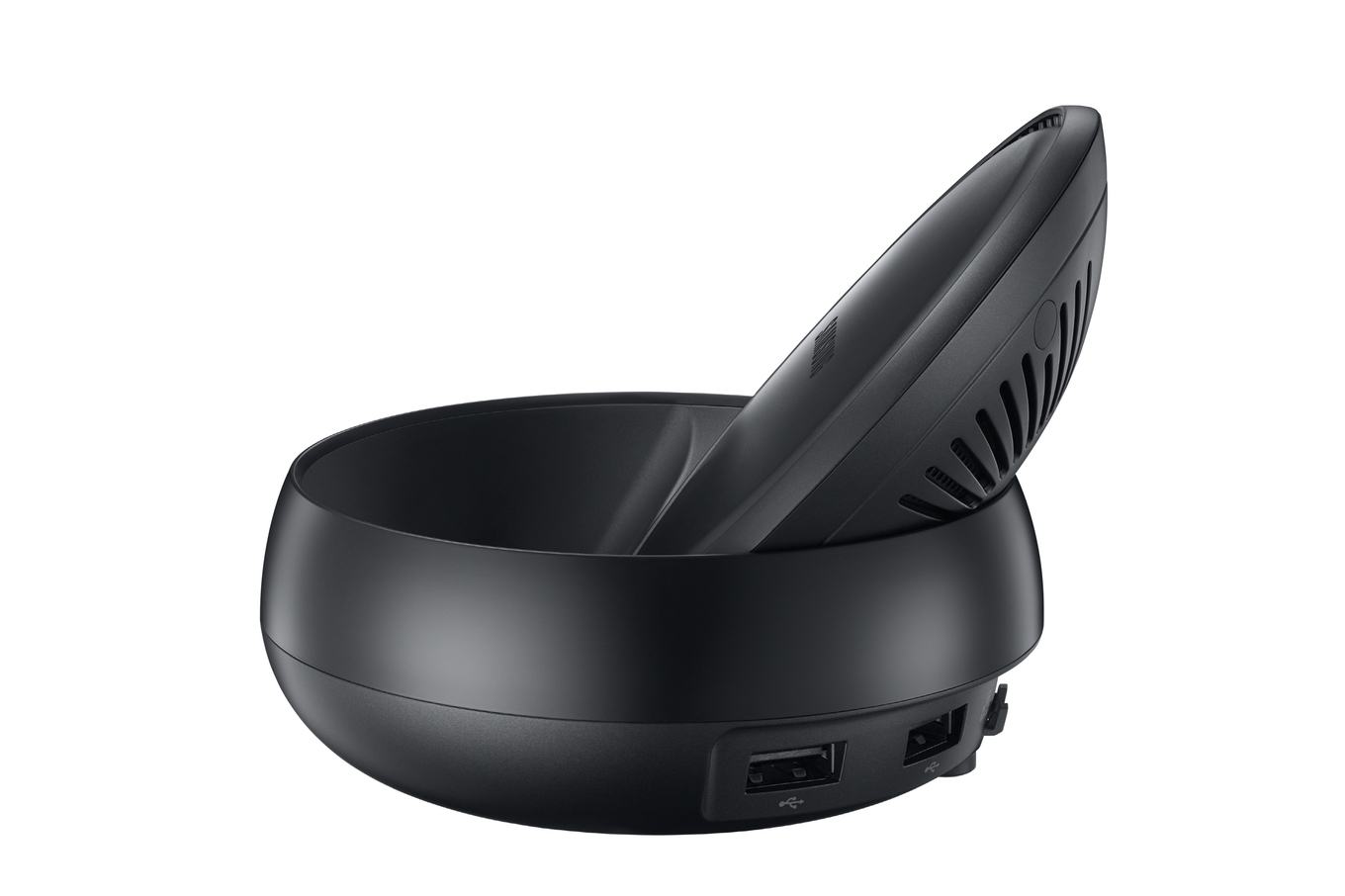 SAMSUNG DEXhas modest sizes and a unique form. This docking station can easily take with me somewhere to work. When it takes it - you only need to move the top and place the smartphone in the resulting depression by connecting it to the connector USB Type-C. Unfortunately, the accessory is supported only Samsung Galaxy S8, S8 + and Note 8. This is explained by the fact that Samsung Dex docking station is designed not only to fill the device to energy. Special software pre-installed on the flagship, launches something harms of the desktop version of the Android operating system.

The accessory is powered by an ordinary network adapter, the picture on the monitor is displayed on an HDMI cable. Even the device includes two USB ports and one LAN connector. If you follow the purpose of the creators, then the mouse, keyboard and wired internet should be connected to these sockets. Or USB flash drive if such a need arises. And do not worry about that Samsung Galaxy Note 8 overheat! The docking station has a fan that practically silently cools the rear panel of the gadget.

The product must be connected only to widescreen monitors - the aspect ratio of 4: 3 is not supported. The initial docking station setting takes a couple of minutes. The whole process is Russified, so there are no problems even for those who bought themselves the flagship recently. Almost all predefined Samsung applications will be displayed on the monitor, and even some third-party. At the same time, a full-fledged multitasking is available, like implemented in Windows. For example, the File Manager and Gmail window can be opened on the screen. In this case, the user can easily drag the mouse picture from one window to another by sending someone an email with the selected image. South Korean flagships can almost everything that computers are capable of. Even the output of two sound streams is available - one is transmitted by the HDMI cable, while the other is sent to the wireless headset. In a word, you can discover new opportunities with Samsung DeX literally every day!

The accessory also has drawbacks. The most important of them is related to the minimum weight of the device. On the table, the docking station is held very uncertainly. A thick HDMI cable can easily drag it along. And the mass of all kinds of wires on the table does not look very nice.

If you have several smartphones and tablets at your disposal, then you should consider buying Huntkey SCA607. This is a universal docking station equipped with four seats. At the same time, the accessory cannot be called huge - if such a desire arises, then you can take it with you. In fact, the product only plays the role of a stand and a charger. In total, it gives out a current of 8 A, which is then divided among different devices. It turns out that everyone gets 2 A - the process of charging all gadgets will not take much time.

The power supply of this docking station is somewhere inside. The accessory is connected to the outlet using a regular cord with a plug. There are four USB 2.0 connectors on the product body. But it is not necessary to look for a connection cable - two wires with micro-USB connectors are hidden by the creators at the bottom of the docking station.

In general, the accessory fully justifies its low cost. It will be appreciated by every person who no longer has enough outlets to connect another network adapter.

Another universal docking station performing the role of a charger. It has a significantly smaller price tag, but to order the accessory will have to find it almost impossible to find it in Russian retailers. The product is sharpened to install just one smartphone. But it puts vertically, thanks to which it is possible to quite comfortably work with him.

Please note that the complete cable has only 90-centimeter length - the socket must be somewhere around (although no one prohibits the buyer to use the extension). The maximum docking station is capable of issuing a current by force 2 A, which should make the charging process fast enough. Micro-USB is used as an interface, so the owners of the newest Samsung smartphones with USB Type-C buy such an accessory. 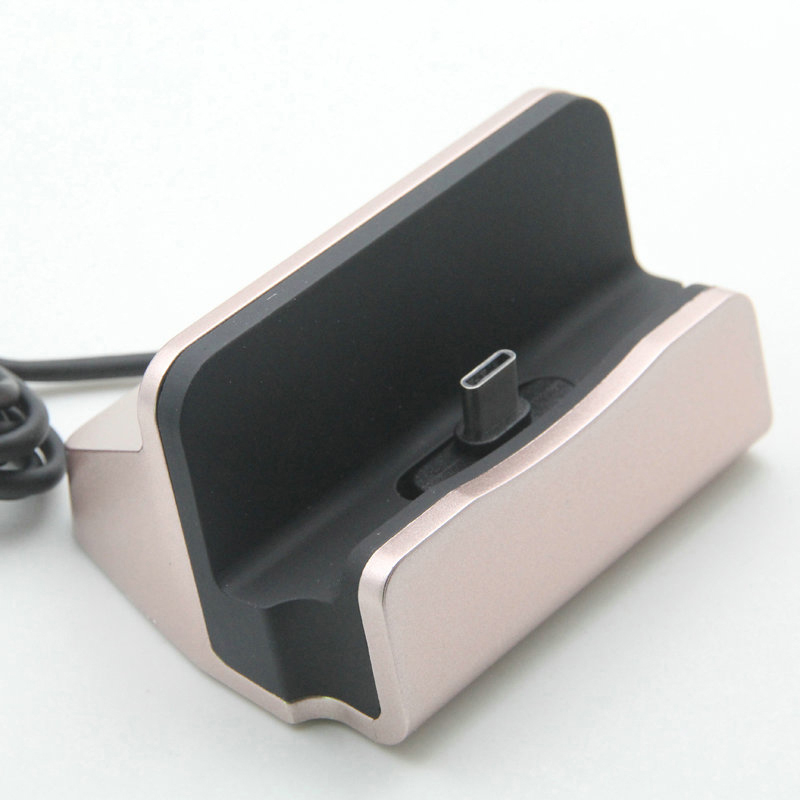 To think about this docking station follows those who are looking for an accessory with a fairly expensive appearance. Reviews of those people who have decided to buy a product are mostly written in a positive way. They liked Metal housing and a rubber base that does not give the docking station to slide on the table. Painted accessory can be in silver, golden, copper, black and even blue color. In the latter case, however, there is no hint on metal, but it is worth such an option a little cheaper.

The product includes a special Micro-USB connector, which is inserted into the smartphone to any side. This means that cases are excluded when the device can be in the docking station only the rear panel to the user. The force of the current current is 1 A, which is somewhat sad - on the fast charge does not have to count. Like the previous version, Lewei Universal is a universal docking station, you can use it not only in tandem with a Samsung smartphone.

At first glance, this accessory fulfills the same role, but at a higher price. However, in fact, it is slightly more functional than the docking stations discussed above. If you need to charge the device, then you put it vertically, thereby inserting the connector into the micro-USB port. But if you want to watch a movie or some videos, then the reverse side of the accessory has been created for you - you can lean the device horizontally against it! It is a pity that charging a smartphone in this position is not possible.

The stand looks noticeably nicer than the competition. It has a round base, in the lower part of which there is a socket for connecting a cable. The maximum possible current transmission is 2.1 A. It should be noted that the product is primarily intended for Samsung smartphones. When using a device from another brand, you will have to buy a docking station only at your own peril and risk.

Of course, the Samsung Dex Station multimedia dock is the best of its kind. She also charges a smartphone and makes something like a computer out of it. But if you only need an analogue of the charger, then you may well consider purchasing the accessories discussed above. Rest assured, none of them will disappoint you!

Overview of the Prestigio Revolt A6 dock station

The best external batteries for smartphones

The best covers for smartphones Galaxy S9 / S9 +: from thin to superproof

Why WhatsApp users are massively moving to Telegram?

How to trim video on android