three-dimensional graphics, high-resolution screens, more advanced chambers, networks 5G and much more - all this requires additional computing power, which modern chipset. What processors are considered the most powerful in the world?

in some benchmarks It is customary to evaluate Performance Apple processors separately because they are intended for another type of devices and can only be compared with similar Cupertino chipsets. Therefore, in this article we will focus on processors that are installed in smartphones operating on the Android operating system.

Huawei produces at least ten new smartphones every year - many of them offer good characteristics in terms of price and quality ratio. Most new products work on KIRIN branded processors. But what can be said about the productivity of the Chinese platform? In our ranking, the most powerful Huawei Kirin 990 chip was only in fifth place. Consider the main characteristics of the processor, as well as let's see in which smartphones it is set at the moment.

If you compare the 5G X50 5G modems from Qualcomm and Balong 5G from Huawei, then the first is played in all respects. If the speed of downloading the difference is small - 2000 Mbps against 2300 Mbps, then the load is different from almost four times - 316 Mbps against 1250 Mbps. However, in KIRIN 990 5G, only the outdated version of Bluetooth 5.0 is still working.

The Chinese processor has a more productive MALI G76 MP16 graphics accelerator, operating at a frequency of 700 MHz, which bypass Adreno 640 installed in Snapdragon last year.

As we saw, Huawei Kirin 990 5G in most characteristics bypass Snapdragon 855, and in some - even Snapdragon 855 Plus. However, if you buy a smartphone for games, you need to take into account that developers most often optimize them for Qualcomm Snapdragon chips. Therefore, the choice is clearly not in favor of KIRIN 990 5G, especially since the situation around Huawei question the future of the entire line of processors.

in the fourth place of our The rating was Snapdragon 855 Plus - an improved version of last year's chipset from Qualcomm. The maximum operating frequency of the high-performance Cortex-A76 computing kernel (KRYO 485 GOLD) was increased to 2.96 GHz against 2.84 GHz in Snapdragon 855. Otherwise, everything remains unchanged: three productive cores Cortex-A76 (Kryo 485 Gold) by 2.42 GHz and four energy-efficient Cortex-A55 kernel (Kryo 485 Silver).

The chip can interact with screens, resolution up to 3840 x 2160, as well as 1x48 MP cameras and 2x24 meters. On smartphones with Snapdragon 855 Plus (if this option has been implemented by the manufacturer), you can easily record video in 4K at 120fps (slow motion) and view 8k at 30fps.

The undisputed leadership is still It remains for processors from Qualcomm. However, it is not time to relax. MediaTek for the first time in many years, very closely approached the leader and in terms of energy efficiency, and in terms of performance. Dimensity 1000 Plus demonstrated good indicators when working in multi-threaded mode.

Can MediaTek compete with Qualcomm this or next year? Let's look at the numbers.

The Dimensity 1000 Plus features four high performance Cortex A-77 cores running at a maximum frequency of 2.6 GHz and four power efficient Cortex A-55 cores clocked at 2.0 GHz. The technological process is 7 nm.

If we look at other characteristics of the Dimensity 1000 Plus, we will see that it is still very far from the Snapdragon 865. If the MediaTek processor only supports the outdated type of LPDDR4X RAM with a maximum frequency of 2.1 GHz and a data transfer rate of up to 30 Gb / s, then Snapdragon can already work with LPDDR5, which supports a frequency of 2.7 GHz and speeds up to 44 Gb / s. In addition, Dimensity 1000 Plus can be installed in smartphones with screens with a maximum resolution of 2520 x 1080, and the maximum possible video is only 4K 30fps - both are worse than last year's Snapdragon 855. At the same time, the platform allows you to install and use 1x80 cameras MP or 2x32MP, and also supports Bluetooth 5.1 and Wi-Fi 6.

However, the cost of MediaTek processors has always been lower, which allows them to be installed in mid-range and even budget-class smartphones. If the Dimensity 1000 Plus is not jacked up in price, then it can be a great replacement for Qualcomm in terms of price / quality.

The following smartphones will work on this platform: Xiaomi Redmi K30 Ultra, Realme X7 Pro and Vivo iQOO Z1. Soon this list will be replenished with devices from other manufacturers. 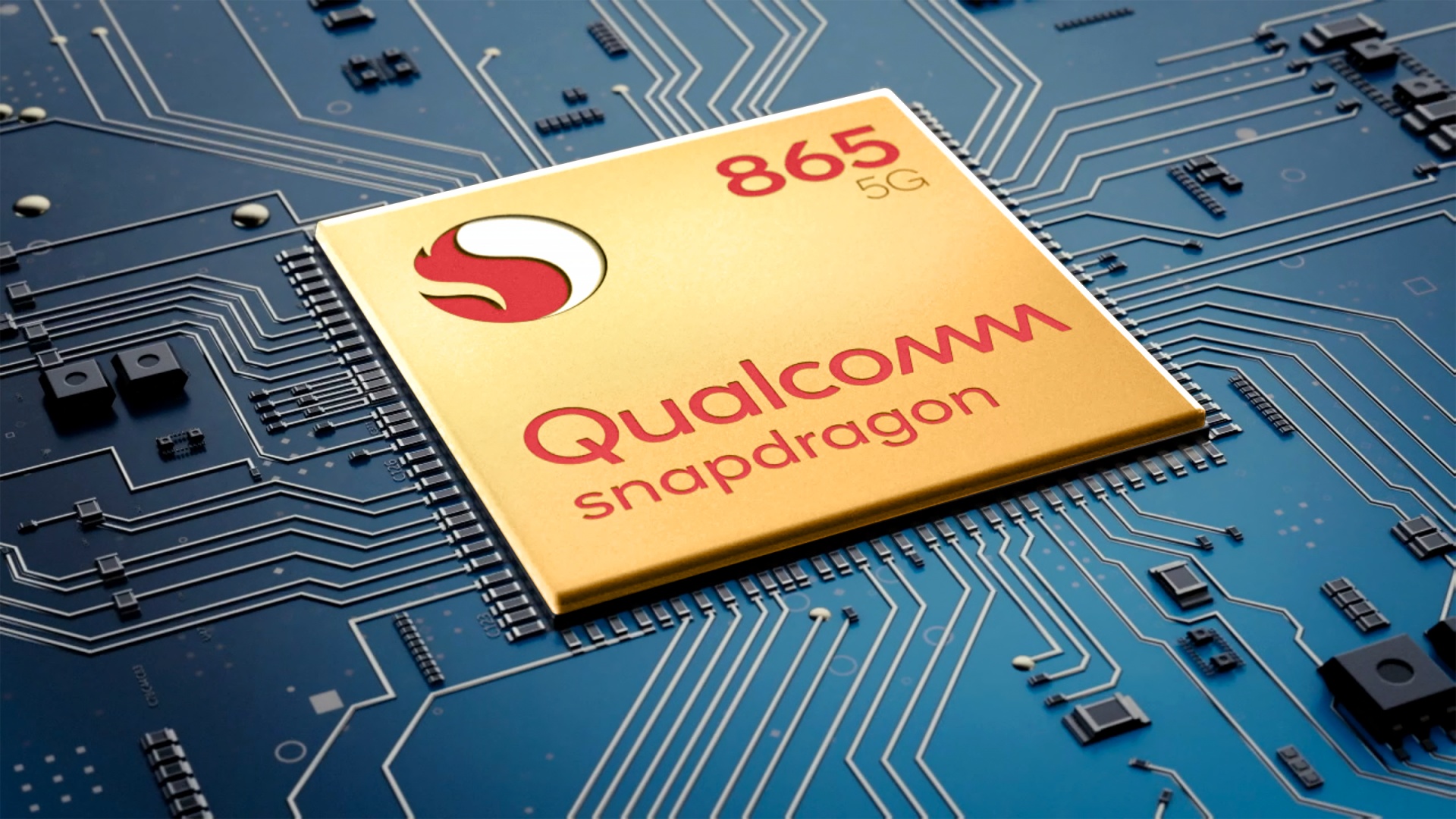 Processor Supports: Bluetooth 5.1, Wi-Fi 802.11ay and 802.11ax up to 10Gbps, 8K video, Dolby Vision, photo 200 MP. Qualcomm Snapdragon compared to Apple A13 Bionic shows approximately the same performance in multi-threaded mode, but loses in single-threaded. However, as mentioned above, the processors are designed for smartphones running on fundamentally different operating systems, so comparing them is not entirely correct.

Qualcomm Snapdragon 865 Plus is an advanced version of the Snapdragon 865 mobile platform. As in the younger modification, four energy efficient kernel Kryo 585 Silver 1.8 GHz, three average power KRYO 585 GOLD 2.42 GHz and one high-performance KRYO 585 Prime. The technological process was not changed and is 7 nm.

Changes touched the high-performance kernel Kryo 585 Prime. In this processor, its power increased from 2.84 GHz to 3.1 GHz. For the first time in history, the mobile platform will be able to work at the capacity of more than 3 GHz. True, the change will affect the same-core regime, but it is important. According to the developer, it should ensure at least 10% of the gains of overall productivity. The capacity of the Adreno 650 graphics accelerator will also be improved by 10%. Thanks to the new platform, the updated versions of Bluetooth communication modules 5.2 and Wi-Fi 6e will earn. Fast charge from Qualcomm of the 4th generation will remain unchanged.

It is especially noteworthy that Qualcomm did not wait to exit the new Snapdragon 875 platform - the decision to overcome the psychological barrier was taken in the intermediate version.

In which smartphones a novelty will be installed? At the moment, the names of only two of them are known - this is Lenovo LEGION and ASUS ROG Phone 3 (both game). Undoubtedly, in the near future, the list of expected smartphones on Qualcomm Snapdragon 865+ will be replenished.

As we saw, in the top five leaders, three positions belong to Qualcomm. And it is not surprising because Snapdragon processors continue to put records. So, this year a line of 3.0 GHz was taken, but so far only in one-threaded mode.

The Qualcomm leadership is unlikely to shake in the coming years. However, the Chinese MediaTek company in recent years has made serious processors that often cost cheaper and often this is exactly the decisive factor for buyers. Of course, to compete with Qualcomm, the Chinese will have to work hard, because MediaTek processors still do not support many new technologies that are already available.

The future of Hisilicon Kirin does not seem indefinitely. Despite the fact that this year the chip fell into the top five leaders, which is waiting for the entire platform, is still unknown. Most likely, the current state of affairs will force Huawei to produce their own production processors, completed with the use of Chinese technologies or, will have to acquire chips from MediaTek, which we have already said, become only more powerful. Surely, in the near future we will learn answers to these questions.

The most powerful plates

The most powerful smartphones of October according to AnTuTu

The most powerful smartphones of September according to AnTuTu

How to choose the right memory?