Leaving an "apple" gadget for several tens of thousands of rubles on the floor next to an outlet to charge is not a good idea. In addition to the expensive iPhone, it is logical to purchase a docking station from a well-known manufacturer.

Apple fans have long made fun of the fact that Android smartphone owners are forced to look for an outlet everywhere - but now they themselves find themselves in an unenviable position. There are more and more complaints about the fact that iPhones sit down in front of our eyes on the forums. There are especially frequent complaints about iPhones of old modifications that have been updated to the latest versions of iOS.

The most obvious way to solve your Apple device battery drain problem is to buy an external battery. But then you get two devices instead of one that needs to be constantly charged. Therefore, it can be considered a more effective way to purchase a docking station capable of simultaneously performing the functions of a stand and a charger. A wide selection of quality accessories for Apple and other equipment can be found in online store iCover.ru . He received a lot of positive feedback from customers for fast delivery, reasonable prices and prompt processing of orders.

In this article, we will highlight the best iPhone docks available on the market in 2019. 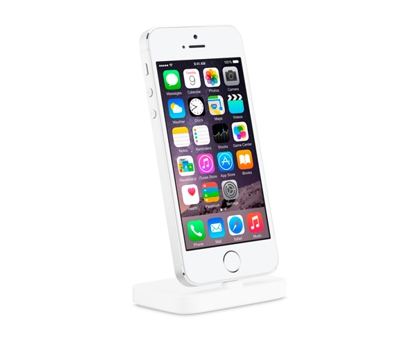 Apple started selling a proprietary docking station with a Lightning plug back in 2015. Even in 2019, it is a trendy branded accessory. One of the main advantages of the stand is stability. The platform is so small that it seems as if it is enough to slightly touch the gadget installed on it - and it will fall. But in reality, it’s not so easy to fill up the Apple dock on its side - it is made of metal, has a fairly large weight (providing balance) and a rubber base, thanks to which it does not slip at all.

Powering up the iPhone isn't the only function of Apple's docking station. It can also act as an intermediary between a mobile device and speakers that connect to the connector located at the back of the accessory. This is especially true for iPhones of the latest modifications, which lack the 3.5 mm jack beloved by music lovers.

Belkin Valet Charge Dock, like all the products of this brand differ in great design. The device is designed for simultaneously charging the iPhone and Smart Apple clock. The model is very simple - the pedestal of anodized aluminum with chrome finish is made in such a way that the smartphone is under an ideal angle, and the non-slip coating of the base does not give it to fall. If necessary, the position of the connector can be changed - there is a special position regulator from behind on the case.

The clock is placed on a special magnetic base and as if soaring in the air. Power docking station is carried out from a laptop or outlet. Connector connector is located on the back side and does not spoil the appearance of the device. An additional layout option is the synchronization function with a computer. This accessory will not only be a useful purchase of a gadget, but also a real decoration. Dimensions - 10.93 x 13.4 x 8.8 cm. Suitable for all Apple models with Lightning connector and smart watches with a diameter of 42 and 38 mm. There is a version in black. 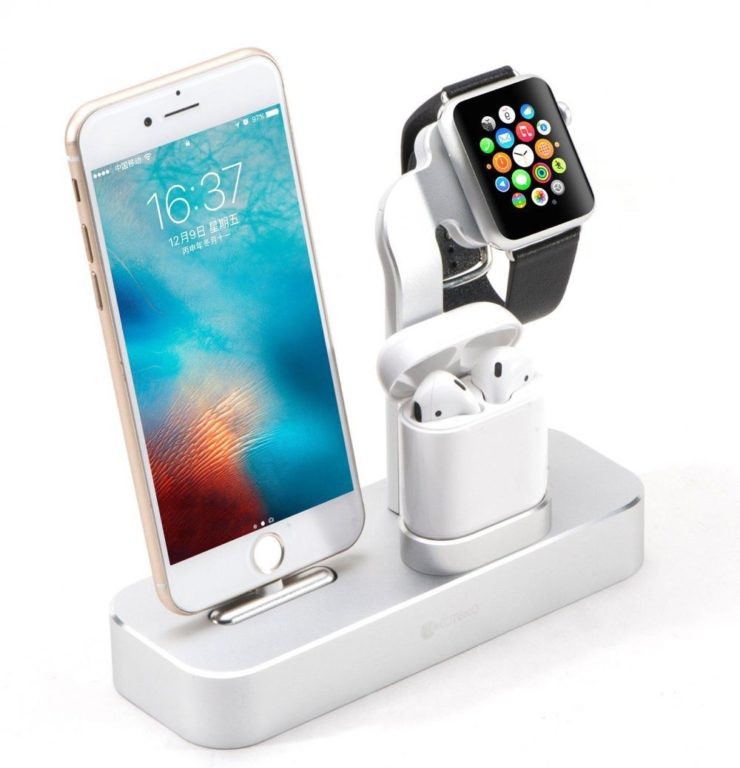 Apple Fans rarely complain about the devices of the beloved brand, but there are still some discontent. With the refusal of the standard connector for connecting the headset and the release of Airpods, users had the need to charge not only the smartphone, but also headphones. The new Coteetci Base19 docking station solves this problem, because she has three seats for simultaneously charging the iPhone, Airpods and Apple Watch.

The model has a strict design and small dimensions. The base received weighting, which provides good stability on the table. The stand will become not only in a convenient way to charge gadgets, but will simply place them for storage, for example, at night. The clock is placed on a platform for wireless charging Qi with a special cable hole (in the kit it is not supplied), the smartphone and headphones are installed on the Lightning connector, while the tilt angle can be adjusted for the phone. Connecting the power cable is made at the back. The model is suitable for any Apple Watch, smartphones - from iPhone 5. Color versions docking station - gray, silver, pink. 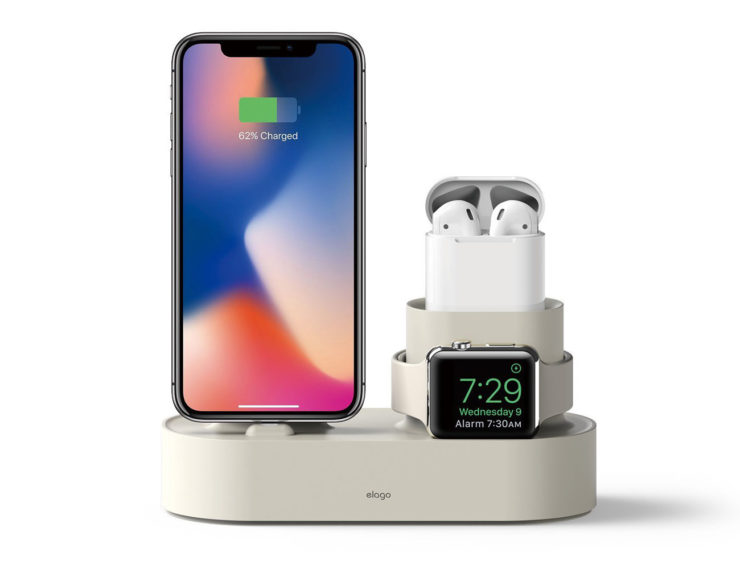 A sufficiently low-cost ELAGO CHARGING HUBING HUB 3 IN 1 is different from numerous competitors by execution material. In this case, silicone is used, which increases the stability of the docking station and eliminates the appearance of scratches on the gadgets. The model is designed for simultaneous charging of smart watches, smartphone and Apple headphones.

The manufacturer did not equip the device with charging connectors, so you have to use your own cables. Especially for them there are holes, and on the back side they are conveniently collected in one place, which eliminates the mess on the table and helps competently organize space. The accessory is designed for any smartphones and Apple clock, as well as airpods. There are several color solutions to the execution of the docking station - you can choose the option that perfectly fit into the interior.

Stand from Studio Neat, made of walnut wood, perfectly fit into the interior of anyone. The platform is sold in 4 versions: wired for iPhone, wireless for iPhone, for iPhone + Apple Watch, for smartphone (wireless) + headphones + clock. The most inexpensive option is a wired station only for the phone will cost $ 45, the maximum price for the version of the iPhone, headphones and clock - $ 95.

The feature of the platform from Studio Neat is that special suckers are placed in its lower part. Thanks to them, the docking station remains very sustainable even with its very modest weight. 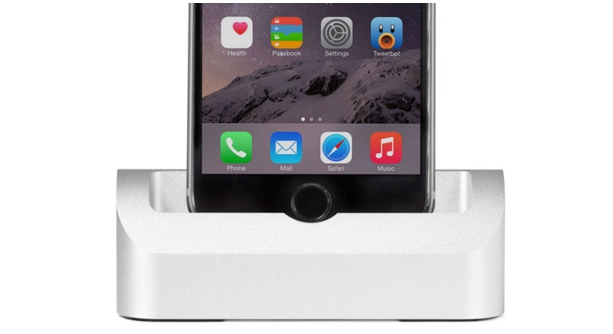 The Elevation Dock stand is performed using Unibody technology - that is, from a solid piece of metal. The accessory is sufficiently heavy, but the manufacturer considered that considerable weight is not able to provide adequate stability and equipped the platform also with the substrates from the sticky of rubber. Such a docking station sound from the table.

Another advantage of Elevation Dock is available at the base of a special removable panel - thanks to which it is possible to charge the iPhone, even if "dressed" into the case. This Elevation Dock differs for the better from a number of other docking stations.

On the official website of Elevation Lab there is a model of Elevation Dock 4 - a platform that supports charging according to QI standard (wireless), however, reviews about brand products are more positive in relation to the 3rd version Elevation Dock.

on forums You can often find reviews in which users express bewilderment: why buy an expensive docking station for the iPhone of the famous brand (or generally branded), if on Aliexpress or Gearbest Chinese analogs are sold for a penny?

In fact, items from the miserable on the quality of manufacturing with branded and nearby are not worth it - and they look so so, because they are usually made from the cheapest plastic, and not out of walnut or aluminum. Docking stations for iPhone and Apple Watch from our Top will not only serve faithfully, without harming the battery of expensive device, but also become an excellent addition to the interior of the room.

The best audio players for iPhone and iPad

The best navigators for iPhone

Overview of the Prestigio Revolt A6 dock station

How to squeeze video on the iPhone

How to take pictures with a blurry background on your phone