Separation of the screen on Android - an interesting and useful feature that allows you to make several tasks on the smartphone at once. Meet our article to find out how to use it on different versions of the operating system and on smartphones of various brands.

Android operating system is regularly updated. With the release of each new version, additional functions are added, and one of them was the screen separation mode. Despite the fact that he appeared for a long time, few users know how to activate it. This is explained by the fact that depending on the version of Android, as well as from the manufacturer of the smartphone, it starts differently. In our article we will tell about what this option is needed, as it allows you to improve the multitasking of the smartphone and how to activate it correctly depending on your device.

in The first screen separation mode appeared on Android 7 Nougat. He was called "SPLIT SCREEN" and was originally accessible only on some models, but later began to work on most smartphones. Its essence is that it allows you to split the screen into two parts (equal size or at the discretion of the user).

Mode allows the owner of the gadget to simultaneously use multiple applications. For example, in one window you can run YouTube, and in the second open messenger and correspond with friends. Or you can search in one window in the browser any information (as an option - just read the book), and in the second to open a text editor and write any important phrases into it. There are a lot of options for using split screen, but the general meaning of this is that with it you can significantly increase the functionality of your device and perform several tasks at once. This is more convenient than constantly switching between applications.

Messengers, YouTube, social networks work well in split screen mode. The camera, as a rule, does not start in it. You should not try to turn on games or other resource-intensive applications - even if they open in the form you need, they will freeze.

How to split the screen on Android: all methods

Initially on Android Nougat Split Screen was activated via the button "Recent Applications". Subsequently, in the latest versions of the operating system, this method changed to another. In addition, on smartphones of different brands, their own options for activating this mode, for example, with gestures, can be installed. Below we will analyze all known ways to split the screen on Android.

Through the "Recent Apps" button

This method is the easiest, appeared on Android 7. To use it, open the desired application, then press and hold the Recents buttonin the form of a square at the bottom of the phone. The screen will split into two parts. The top one will contain the selected application, and the bottom one will let you launch any other application that supports Split Screen. 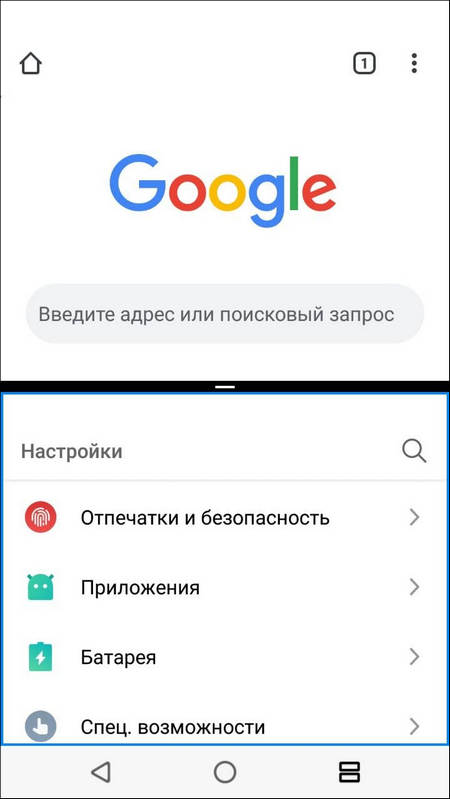 You can use the function when the smartphone is in both portrait (portrait) and landscape (landscape) orientations. By default, the screen is divided into two equal parts, but you can change the size by moving the dividing line in the middle.

Through the multitasking menu

To use this method, open the multitasking menu by short pressing the Recents button. Above some of the running applications, you will see an icon in the form of two rectangles. Click on it to split the screen, and then select another application from the second half of the display.

Depending on the version of the operating system and the manufacturer's pre-installed shell, on some smartphones, the applications in the multitasking menu will be arranged in a vertical order, so the split screen icon will be located on the left.

In some cases, for example, on Meizu , you will need to slide down the application in the multitasking menu to see the indicated icons.

Depending on the smartphone model, it may be enough to start the mode in the multitasking menu simply move the desired application up or down.

Instead of separate buttons over each application, depending on the version of the OS, you can see icon and The inscription "split screen" at the top of the device. Click on it. The field will appear at the top and inscription: "Drag the app here." Do it, and then in the bottom area, select the second application. If SPLIT Screen is not supported, in the application window will be written about this.

If there is no icon in the form of two rectangles or inactive, it means that this application does not support the SPLIT SCREEN mode (92]. 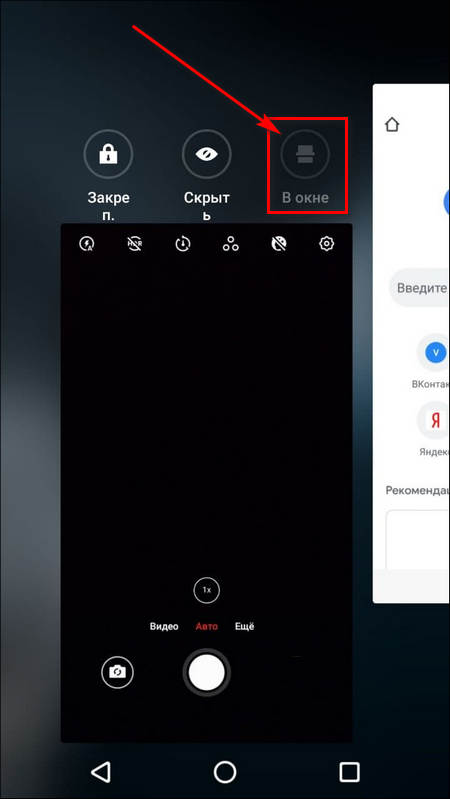 on Android 10 and 11 The screen separation mode also opens through the multitasking menu, but it looks somewhat different.

Step 1. Press the button "Recent", find the application and press it the label.

Step 2. In the menu that appears, select "split the screen".

Now in the second window, choose another application that you want to use.

on Android 6.0 and the newer appeared System UI TUNER. It offers flexible features to personalize the device, including the SPLIT SCREEN mode (116]mode in later versions of the operating system. Pre- System UI TUNER will be needed to be included, because by default it is inactive. Instructions:

Step 1. Slide down the notification panel, click on the icon in the form of a gear and hold it until it starts rotating.

Step 2. A notification "System UI TUNER function is added to the settings menu..

Step 3. Go to Settings. In section "On System", locate the mode System UI TUNER and open it.

After switching on, you can split the screen into two parts by simply swipe up the button "recent". It is convenient, for example, with frequent use of the mode.

If you use a smartphone Xiaomi , you can start split screen mode button of your choice. The function must first be activated in the settings.

Step 4. Select the button ( Home, Menu or Back ) that will launch the while holding it for a long time. A preview will be available above, allowing you to see exactly what action you need to perform. Normally, the function starts working immediately after activation. If this does not happen, restart your smartphone.

Owners of mobile production equipment Honor can split the screen with their knuckles. This gesture must first be activated in "Settings". To do this, select the item "Control" and in it opposite the item "Enabling multiple windows" turn the switch to the active position.

Also on a number of models Honor the inclusion of the mode with a two-finger swipe works. To do this, open the desired application and swipe down on the screen with two fingers. If splitting is not supported, a notification will appear.

Like other manufacturers, Samsung offers its own way of splitting the screen into their phones. To use it, open Recent Apps, select the one you want to launch, tap its shortcut and tap Launch in Split Screen. Then select the second application. The display will be split in half. To return the windows to normal, press the "X" on the top of the device.

If Split Screen does not start, open Settings - Accessibility - Screen Reader ​​and make sure that Voice Assistant is disabled. If it is active, the mode will not work.

On Motorola and Lenovo

On smartphones Lenovo and Motorola gestures can activate a large number of tools and functions, including split screen, but this feature must first be activated. To do this:

Step 2. Find “Gesture to Split Screen” in the list and move the slider to the right to activate it.

Step 3. To use the mode, launch any application and swipe from left to right and back direction.

Then, in the second part of the screen, you need to select and open the second application.

You can make it easier to start split screen mode using dedicated third party applications. One of them is "Split Screen Shortcut" available for download in Play Market. Install it, and then in the smartphone settings, grant permission for its operation.

In the application options, activate the function and select how it will work - by pressing the "Back", "Home", "Menu" keys or through a separate button on the screen. You can also set whether a mode activation notification is required or the operation should be performed without notification, immediately after pressing the selected button.

Now, to launch Split Screen, just press the key of your choice, for example, a separate button, as in the screenshot below.

There are quite a lot of similar applications in Play Market. You can choose the one that suits you and your device, but keep in mind that some work a little differently. They start a split screen, but in two windows you can only show the tools that are in the application itself. These include, for example, Floating Apps Free. It has a lot of mini-utilities (calculator, randomizer, etc., even some social networks) that can be run 2, 3 or more at the same time, but third-party software will only open in full screen.

What to do if the screen separation does not work

Sometimes on smartphones mode SPLIT SCREEN is disabled by default. In this case, you will not be able to activate the methods proposed above. To run it, follow the instructions:

Step 1. Open "Settings" and turn on Developer mode. To do this, go to section "On Device" and find "Assembly number". Click it 7 times. A message appears - "You have become a developer."

Step 2. in section "System" Find the tab "for developers". Depending on the version of Android, it can also be in the settings themselves, in "special features" or in other sections.

Step 3. Find item "Changing the size in a multi-zone mode" and transfer the slider in front of it In an active position.

Restart the smartphone, after which you can use the screen separation mode. On the Android under 7 version it is not supported, therefore, in the "For developers" tab, the point above will not be.

How to exit the screen separation mode

To return to the usual position, drag the separation strip down or up, depending on which From applications want to withdraw in full size.

The second method is suitable if there is a button in the form of two rectangles at the bottom of the display. Click on it and hold to complete the mode SPLIT SCREEN.

In our article, we disassembled all the ways to separate the screening of the screen on android. Some of them depend on the version of the operating system, others work only on the technique of certain brands. Meet them and choose the best for yourself to make your device more multitouch and with great comfort to work simultaneously with multiple applications. And if you know other ways to split the screen into two parts, share them with us in the comments.

Schedule of updates to EMUI 10 for 33 Huawei models revealed

The best keyboards for PS4 and PS5

How to configure iPhone when you first turn on?