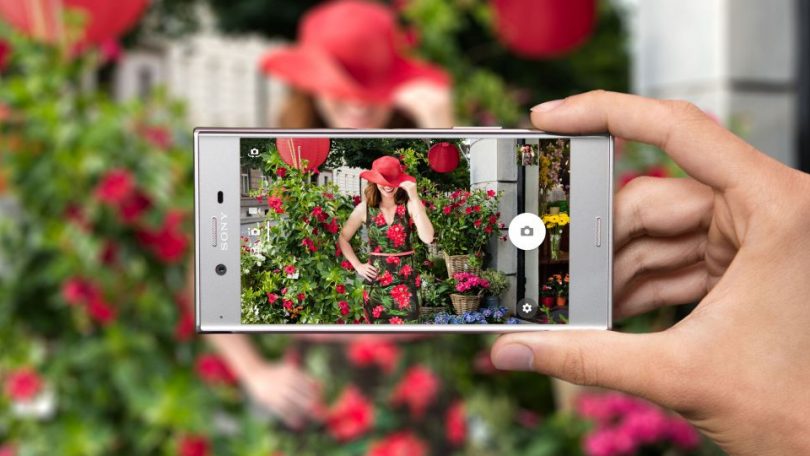 Announcement of the smartphone can happen very soon.

Added 30.08.2017: Another official images of the smartphone appeared. It happened in one day to the announcement of the apparatus of the exhibition IFA 2017 in Berlin, which will be held on August 31. 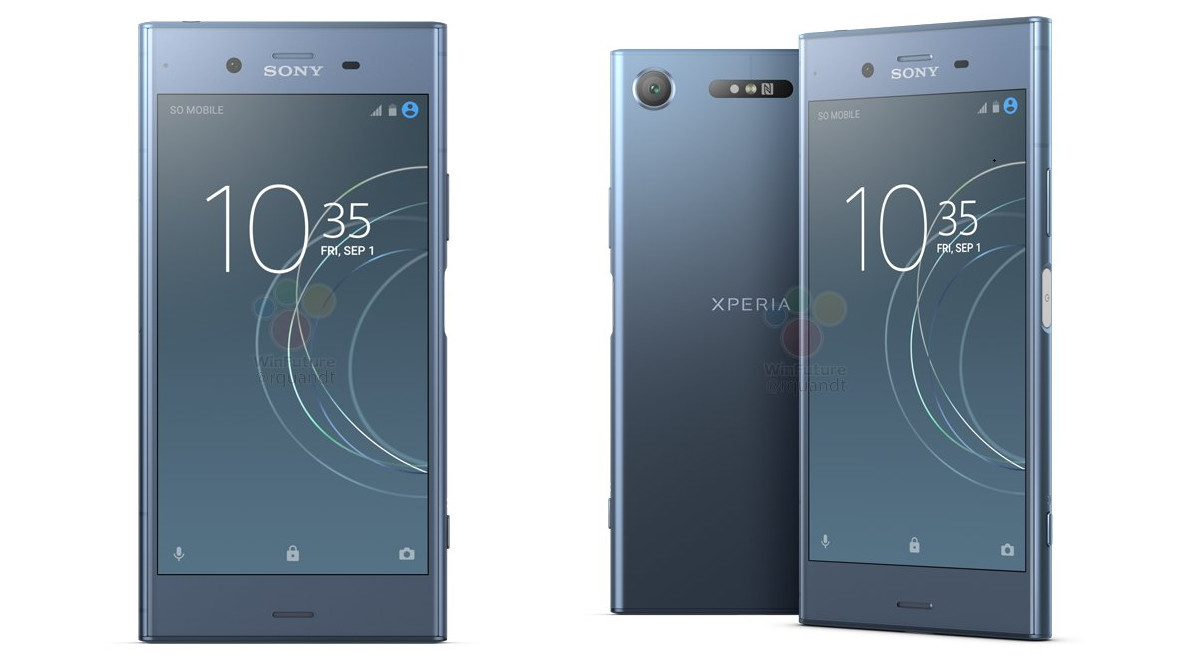 It is known that the device will be sold at least in three color variants; Blue joined to black and pink. Also shows the rear surface of the smartphone. For the first time you can clearly see the strips on the sides.

The weight of Xperia XZ1 will be 156 g, the thickness of the housing is 7.4 mm. Confirmed 5.2 inches screen diagonal with a resolution of 1080p and support HDR, battery capacity of 2700 mAh.

Posted on 08/24/2017: On the day Announcement Galaxy Note 8 appeared official images of the new smartphone Sony, which is one of three planned by the Japanese manufacturer for the near future. Before, we saw not so detailed photos of XPERIA XZ1 (XZ2), but now you can get acquainted with official materials.

The classic design of Sony Omnibalance was returned. Its main difference is the array of sensors on the rear panel, which has become wider than the XZ Premium and is located along the horizontal axis.

The announcement of the apparatus is expected on August 31 along with a less large Xperia XZ1 Compact smartphone and an average price category model that can be called Xperia X1. It will happen at a press conference before the IFA 2017 electronics exhibition in Berlin. The exhibition itself will begin the next day.

in Sony Smartphones Models Easy Get confused and this is normal. Xperia XZ smartphones line is approximately in the middle between Xperia X and XPERIA XZ Premium, but there is still Sony Xperia X Performance, Xperia XZS, which reminds a kind of Xperia XZ 1.5.

This Xperia XZ 2 (presumably, it will receive the name Xperia XZ1) should become better compared to XZ and XZS devices. We bring to your attention a list of wishes, what improves it should be.

This list can be found below, but first let's talk about what news and rumors were relatively Sony Xperia XZ1 and when we can see it.

The first Sony Xperia XZ was presented in September 2016, so that there is hope that this year the announcement will be in September. If so, it can happen at the IFA exhibition in Berlin, which will be held on September 1-6. Sony has repeatedly announced their new smartphones there.

The price is still known to a little, but it is unlikely that it will be lower than last year, that is, $ 700. This is a high cost, but below compared to Xperia XZ Premium.

The price of the Sony smartphone with a model number G8341 appeared on the Polish site. It is not clear exactly what this smartphone is, but at the cost of $ 860 it is clearly flagship.

Information about Sony Xperia XZ1 is abuse. A recent data leak showed its images and brought a list of hardware characteristics. If this leak is accurate, in terms of appearance, the smartphone is similar to other Sony models. This means a rectangular shape, Metal case and slightly curved edges, but there are no explicit antenna bands, like on xperia xz.

Screen diagonal with support for HDR is 5.2 inches, used Processor SNAPDRAGON 835, 4/64 GB memory capacity. The rear camera with a resolution of 19 MP is able to conduct a slow motion at a speed of 960 frames per second. The permission of the front chamber is 13 megapixel. Also mentioned front stereo speakers and protection against water and dust, IP65 or IP68.

The smartphone named with the G8341 number has a 1080P screen resolution and works on the Android O operating system, there is a possibility that it is Xperia XZ1. This model appeared on the Internet repeatedly. The processor here is also SNAPDRAGON 835, the location of the rear camera and of the fingerprint scanner is changed, which is a big event for Sony, which does not like changes.

Other information arrived in January, there were no confirmations from then. Then it was said about the codow named name Blancbright, 5.5 inches screen with a resolution of 1440 x 2560, of RAM 4 GB, Sony IMX400 camera sensor and Snapdragon 835 or SNAPDRAGON 653 processors.

The latter we are unlikely to see in such a road by an expensive smartphone, otherwise the specification is inspired by trust. To check, you can see on the characteristics of Xperia XZ and XPERIA XZS: the specifications of the new smartphone should be better or at least not worse. This means a screen with a resolution of a minimum of 1080p and 4 GB of memory, the processor must be newer Snapdragon 820. At the moment, the flagships are used by the Snapdragon 835 processor.

cameras can be 13 meters in front and 19 megapixel comes on the XZS and XZ Premium. Also cameras can be improved due to the latest technologies.

In Xperia XZ Premium there are additional features, such as a predictive set of text and a very slow motion mode. Perhaps now they will appear in Xperia XZ1.

1. The screen with resolution QHd

If you buy the flagship of the production of Sony, you get a screen or with a resolution of 1080p, which does not reach the devices of Galaxy S7 or HTC U11, or the 4K screen, which is today The day is a bust.

For quite a long time, Sony did not offer permissions QHD and Xperia XZ1 seems like a suitable apparatus to correct this omission. In this case, the image on the screen will become more clear, work with virtual reality devices will also be improved if they are supported.

2. Fingerprint scanner in all countries

This item does not affect Russian buyers, but in some countries Sony devices are sold without fingerprint scanner. For example, it happens in the USA. The reason for this is not clear, but most likely it is associated with marketing or other business considerations. The United States is the largest market and the lack of a scanner on smartphones harms their sales here. Although Sony makes small changes in each generation of its smartphones, in general, their appearance has not changed for a long time. I would like this to happen now. The device can be made with a round or curved, as long as the appearance is different from the usual and become more innovative. A smartphone must impress at first sight in order to make you want to buy it.

Sony's Android shell is fine, but the company usually puts too many unnecessary apps. Only a few of them are useful, the rest are usually not needed and, if necessary, they can be quickly downloaded from the Play Store. Sony should refuse to install these applications and is content with the basic set of Google programs.

The speakers on the Xperia XZ were not bad, they could give a good stereo effect, but the volume was not loud enough. It needs to be raised in the new smartphone so that users can get loud and clear stereo sound.

Sony smartphones traditionally have not bad cameras, but they were never the best. I wish this situation would change in the Xperia XZ1. Dual rear cameras are popular on flagship smartphones these days. They allow you to enlarge the image without losing quality, take wide-angle shots and blur the background.

I would like not only to increase the screen resolution, but also to replace the LCD panel with OLED. Apple may migrate to this Apple technology in the iPhone 8, Samsung has been using it for many years, so Sony should not be left behind.

Although OLED is no better than LCD from an objective point of view, there are advantages in some respects. For example, these are deeper blacks and richer colors.

How to install Russian on android?

Top smartphones for the ratio of "price-quality"