Echo sounder for a smartphone can turn fishing into a dynamic and gambling event. How - tell this article.

Fishing and information technologies seem to be things from different universes. Nevertheless, gadgets got to this traditional form of male leisure. Using a wireless echo sounder associated with a smartphone, you can significantly save time on finding a suitable fishing space. How not to be mistaken when choosing a echo sounder for the phone, we will tell in this article.

What is a echo sounder for a smartphone and how does it work?

Echo sounder for the phone is a small device, as a rule having a shape of a ball. Visually something resembles a device for catching Pokemon. 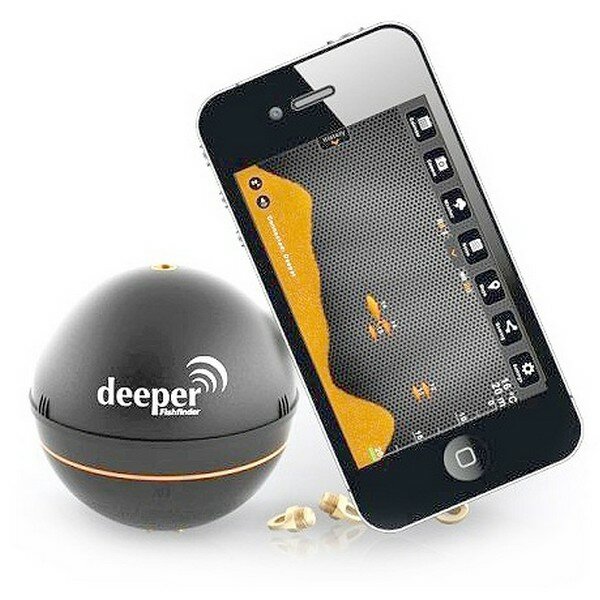 The echo sounder has a durable waterproof case, to damage which is another task. Inside there is a battery and a transducer. The last component is the most important. The transducer radiates echolocation - that is, it sends a signal to the bottom, then it takes and processes what it has reflected.

How to choose a echo sounder with a smartphone for fishing?

Among the criteria for which the priority should be addressed when the echo sounder is selected:

The best models of echoolets

models of echooles are many, however, the units are popular among them. Imagine the top 3 high-quality echoolets in our version:

Estonian Deeper is a key player in the echootics market for smartphones, several notable models immediately in its directory. FishFinder is a 2-radiation echo sounder. The first emitter operating at a frequency of 90 kHz generates general information about the day. The second with a frequency of 290 kHz gives more specific data. It, in particular, is able to identify even individuals of fish if they are at a distance of 3-4 cm apart. Echo sounder is suitable for winter fishing (operating at -20 ° C), one charge is enough for 4 hours of continuous operation. Of the minuses - high cost (about 12 thousand rubles) and black color. It looks solid, but echo sounders of bright colors are more noticeable.

This echo sounder looks just quite lightly, but its We won't miss the mind. The maximum depth on which Vexilar sees is 90 meters. The radiation power is 400 watts. Scan frequency - 125 kHz. The model is capable of scanning the relief of the bottom, the depth of which is the fish and its size. The device is suitable for winter fishing - permissible work temperature from - 20 to +40 degrees. There is such a device just over 10,000 rubles.

This is an option for those who prefer to support the domestic manufacturer. Home "Fishka" Echo sounder practice 7 Wi-Fi - For a long time on one charge. In fact, it is enough for 7 hours of continuous fishing, while there is fast charging, which in 15 minutes will fill the capacity for 3 hours of operation. The model has a backlight, which allows you to use it at night. The scanning depth is 25 meters, there is a function of drawing up the depths of the reservoir. Communication range - 80 meters. Scanning frequency - 250 kHz. Operating temperatures - from -20 to 40 degrees. Cost is also about 10,000 rubles.

Mobile echo sounder is a useful device - but only for those who are riding fishing is really for the sake of catch, and not in order to Measure the bikes in a pleasant company. Fishing with a echo sounder is "action", there is no time to relax. It is necessary to constantly monitor the screen of the smartphone, because otherwise you can miss the "bread place". Fishermen note that the use of a echo sounder forms a kind of dependence and generates excitement - when she got used to catching with a sonar, fishing without it turns into an incredibly boring event.

Which processor is better for a smartphone?

How to listen to the radio on iPhone: top best radio applications

How to install APK file on Android?