A thermal imager is a useful device that is used not only by professionals, but also in everyday life. With this device, you can, for example, determine the areas of heat leakage in the house or find faults in the electrician.

Despite the fact that a thermal imager can be useful even for a conventional housewife, it has not received wide distribution among smartphones. Such giants as Samsung, Apple, Xiaomi and other companies do not tend to experiment and equip their devices with such a device. They have a different course of development: improve cameras, performance, introduce more useful technologies for the masses.

And yet, today there are several manufacturers who are not afraid to experiment in some way and “roll out” quite unusual smartphones on the market. For example, with a thermal imager. This article will focus on such devices.

AGM GLORY PRO is a real monster in the category rugged smartphones. It is equipped with a durable housing that protects it from water and dust, extremely high and low temperatures: the device is able to work at -40°C and at +60°C, while many other phones simply turn off in such conditions.

The smartphone is equipped with a thermal imager with a refresh rate of 25 Hz and a resolution of 256*192, which operates within a radius of 5 meters and measures the temperature with an accuracy of ± 2°C in the range from -15°C to 550°C. An indispensable tool for hunting and search activities. In addition, AGM GLORY PRO has a night vision camera with a 20 MP module, which allows you to shoot in complete darkness. In combination with the main chamber of 48 MP with a matrix from Sony, it provides the ability to make high-quality pictures in any scenarios.

BlackView BV6600 Pro Manufacturer The most affordable smartphone with a thermal imaging camera. Its camera perfectly recognizes heat sources and helps, for example, to identify problems in the nodes of the car, check the heating and air conditioning system, navigate the unfamiliar area.

At the same time, this is a rather productive smartphone for its price tag. In addition to high-speed iron and truly impressive battery on 8580 mAh, BlackView BV6600 Pro can boast support NFC, superproof housing and the latest version of Android OS. 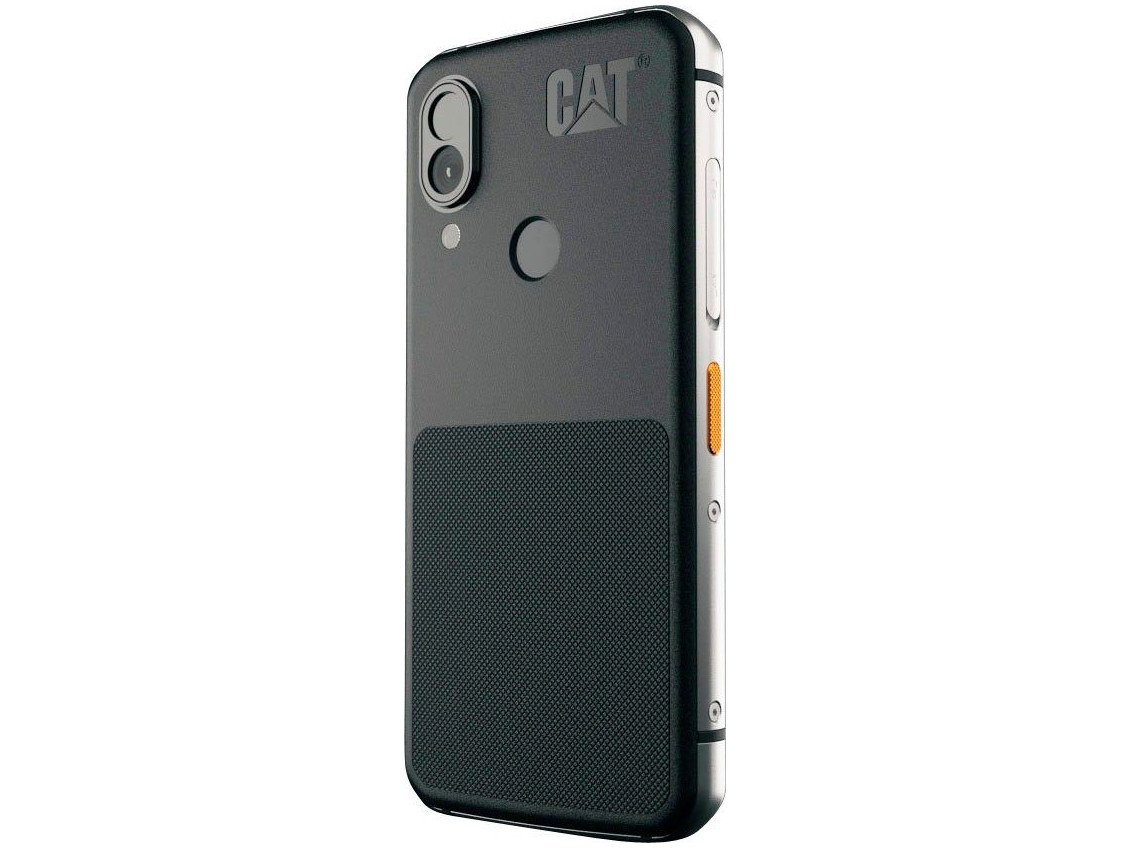 Caterpillar is one of the most famous manufacturers of equipment for the construction and mining industry. The American company specializes in the development of devices of various types, including smartphones. In addition to the presence of thermal imagers, telephones “ CAT ” can be called almost the most secure and reliable among their counterparts.

It is clear that the photo and video capabilities of the S62 Pro will not stand out - this device is “not about that” and “not for that”. The main sensor from Sony received a resolution of 12 MP. Additionally, there is a 1.4 MP FLIR thermal imaging sensor on the aluminum alloy body (temperatures: from -20 to +400 degrees Celsius). There is a mode HDR, EIS, phase detection autofocus.

The Caterpillar S62 Pro is based on an octa-core Snapdragon 660. This is a mid-range chipset that is enough to run a smartphone normally without stuttering even in many games. The battery received a standard capacity for most phones today at 4000 mAh, which should be enough for at least a day.

Another good one rugged smartphone with a thermal imager from Caterpillar – S61. This is a more simplified model than the previous S62 Pro, but it also has a lower cost. First of all, I would like to highlight the compactness and ergonomics of the device: the screen diagonal is only 5.2 inches, and the weight, despite all the features, does not exceed 160 grams.

A 16-megapixel main camera sensor, a flash and a thermal imaging sensor were installed on the back of the device. There is no wide-angle mode, macro or lossless zoom here: only a minimal set of functions is present. But you can record video in 4K 30fps or shoot in HDR. Photos are not shameful, but the quality is still below average.

In terms of performance, the smartphone has no special problems, despite the fact that it works under the control of the Snapdragon 630 single-gryl system, announced back in 2017. The graphic chipset here is weak, but the processor part copes well with basic needs: Messengers, surfing on the Internet, application of applications. 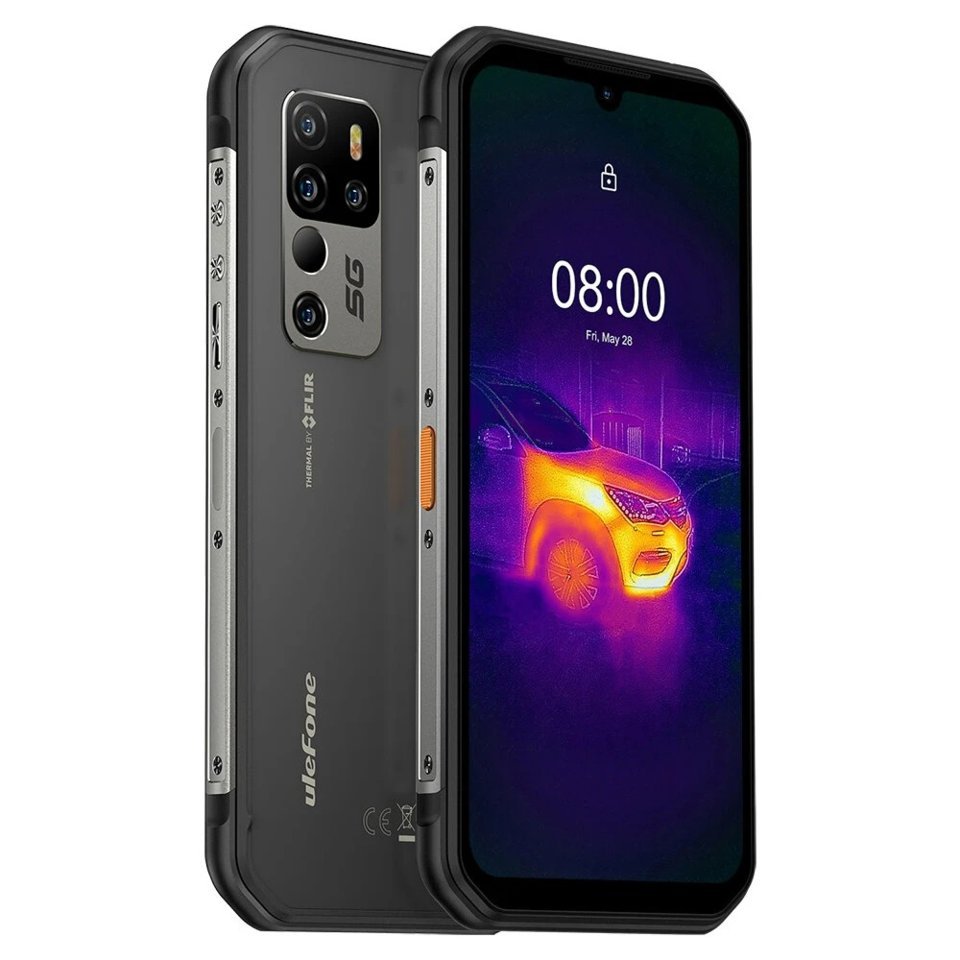 The third line occupied Ulefone Armor 11t. The smartphone will be much closer to the "standard everyday" mobile phones, which each of us uses regularly. Here you can find good cameras, Powerful processor and support for many topical technologies (5G, NFC, etc.). In addition, all this is hidden in a protected body, as in the case of "CAT" devices.

On the back panel, the manufacturer posted as many as 5 lenses. The usual system consists of a 48 MP main chamber, a macromodule by 5 MP, as well as two additional sensors with a resolution of 2 megapixels. The fifth is the FLIR thermal imaging sensor, registering temperatures from -10 to +400 degrees Celsius. There is a night and underwater mode, timelaps, shooting in 120fps or 4k 30fps, EIS, 10-fold digital zoom and other functions.

As a platform for Armor 11t, a fresh Dimensity 800 chipset was selected from MediaTek. This is a medium-high level of performance processor, a device running which is superior to 85% of the devices based on other single-chip systems. Most games will run comfortably at high graphics settings, which contributes to a small screen resolution (HD +).

Armor 9 is another model from Ulefone in this collection. It features a large 6600 mAh battery, a durable aluminum alloy body, good hardware in terms of performance, and even the presence of an endoscope. Works on the basis of Android 10 Q with a proprietary shell preinstalled on top.

As you can see, Armor has 9 “holes” for cameras. In fact, there are three separate sensors: the main 64-megapixel Samsung Bright S5KGW1, a thermal imager and an additional module for it, as well as a sensor depth by 2 MP for bokeh effect. What is surprising is the presence of optical stabilization, which was not delivered even in the more expensive Armor 11T.

The filling of the device is not designed for games. The 8-core Helio P90 chipset was introduced in 2019 and is manufactured at 12nm. Thanks to this, the smartphone does not heat up like an oven and saves battery well. With this in mind, a fully charged battery will last for several days under normal usage scenarios.

The third brand appears in the selection - BlackView. Traditionally, for all smartphones in this company, the BV9900 Pro model received a solid body made of plastic with rubberized coating. Top and side faces are more fortified: the metal is used here.

Regarding Cameras in the device there are four rear modules led by the main lens for 48 MP Sony IMX582 ERMOR RS. For the smartphones of the middle segment, quite good optics, but if you make a thermal imager for brackets, you can find better. There is also a 16 megapixel wide-angle sensor, the scene depth sensor for portrait photos and FLIR.

"Iron" from the Blackview BV9900 Pro is set to a similar previous smartphone from ULEFONE, which means in terms of performance they are identical: in everyday use there will be no problems, but in many games you will have to sacrifice the graphics quality. By autonomy, the picture is quite standard. The battery at 4380 mAh is just enough for at least one day.

Next for BlackView BV9900 Pro is a slightly simplified model BV9800 Pro. There are differences between devices in everything: the chambers have become a little simpler, the processor is now less productive, the reserve of RAM decreased. At the same time, there are positive dynamics: the battery capacity has greatly increased, and the larger display with a diagonal of 6.3 inches has been imported.

In addition to the main feature in the form of a FLIR thermal imager, which combines all the devices from the rating, the smartphone has a double main camera. The standard module is set from Sony (IMX586, F / 1.70) with a resolution of 48 megapixel. There are no lenses for macro or wide-angle pictures, but there is a 5 megapixel depth sensor. Further, all "according to Standard": autofocus, flash, shooting FHD 30fps. The front line on 16 MP also knows how to write FHD in 30fps.

The Heart of BlackView BV9800 Pro has become the Helio P70 single-grip system from MediaTek. In general, the processor part here is quite modern, and the memory is enough. It is enough for the smartphone to use comfortably without constant lags. However, for gemina such a chipset will already be not enough: you can play, but only on medium-low settings. 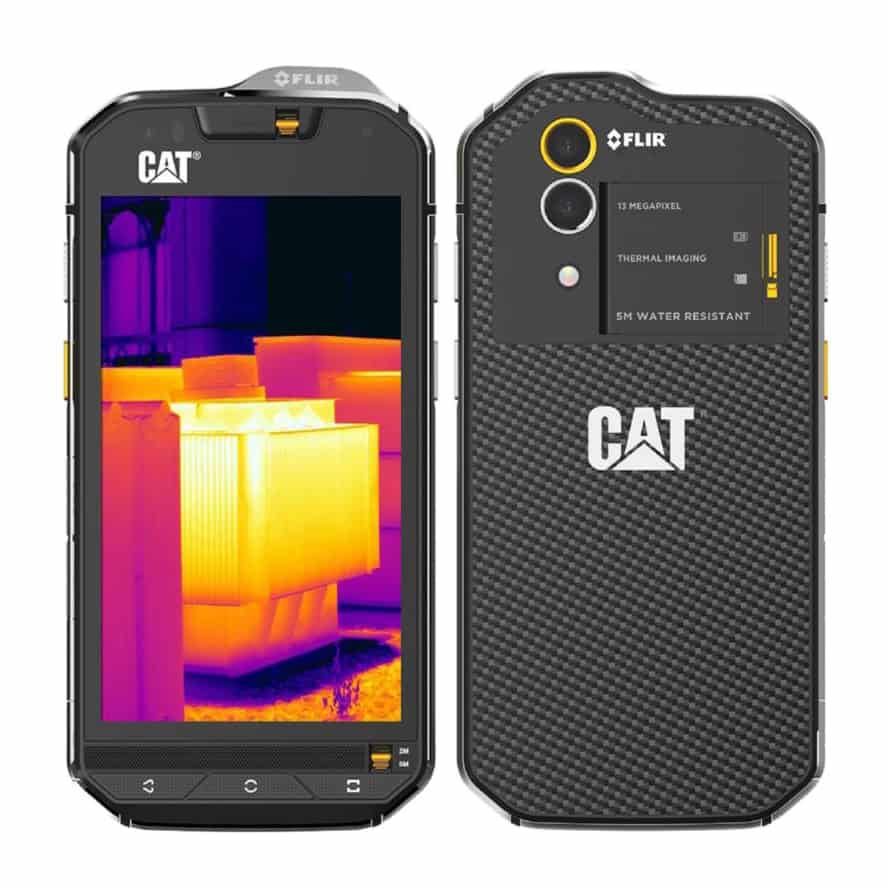 Caterpillar S60 became the last device in the selection. If there were more choices among such specific smartphones, the model would hardly have made the list due to its characteristics. However, you do not have to choose, since the market for such phones is very poor. In the S60 itself, one can note a good battery and a proprietary protected design.

You don’t expect high-quality optics from a device presented in 2016 and not intended for mass use. On the back of the case is a 13-megapixel camera and a FLIR sensor. The front lens is 5 MP. For your own purposes (taking measurements, using a thermal imager, etc.) it will do, but no more.

The Qualcomm Snapdragon 617 single-chip system installed in a smartphone can rightfully be considered outdated at the moment. You will have to forget about games, but for other tasks the device will do. The internal storage is small but can be expanded with an SD card. The S60 charge holds about a day with small errors in both directions.

Top best applications to determine the number on Android

The laptop is connected to the network, but charging does not go: what to do?

How to find in Spotify music that will like?