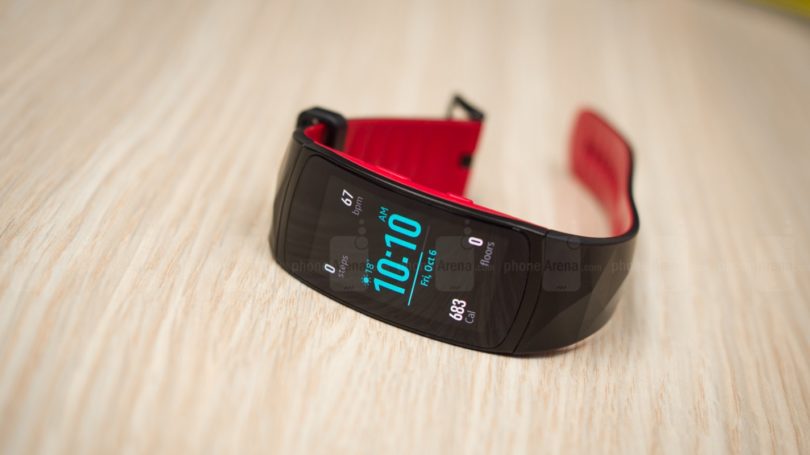 Last year, the company Samsung released Fitness tracker Gear Fit 2, which turned out to be one of the best products in this category on sale. Instead of the release of a new generation of devices this year, the South Korean developer decided to give last year's model improved protection against water, add the word Pro name and calmed down.

The modern market for fitness trackers seems to be crowded devices of different sizes, forms and functionality to such an extent that making a decision in itself becomes a complex physical exercise.

Despite this, last year Samsungreleased an excellent model Gear Fit 2, including all the necessary functionality and even more. It is not surprising that instead of the release of a fully new device this year, the company decided to lightly improve last year's already high-quality product. This improvement was the protection of the body from water, thanks to which the name Pro appeared in the name.

Few other fitness trackers can be used during swimming. Someone will like it, someone does not need it, it all depends on the needs of a certain person.

You are reading the review of the portal Phonearena.com, The original material was published on October 6, 2017. 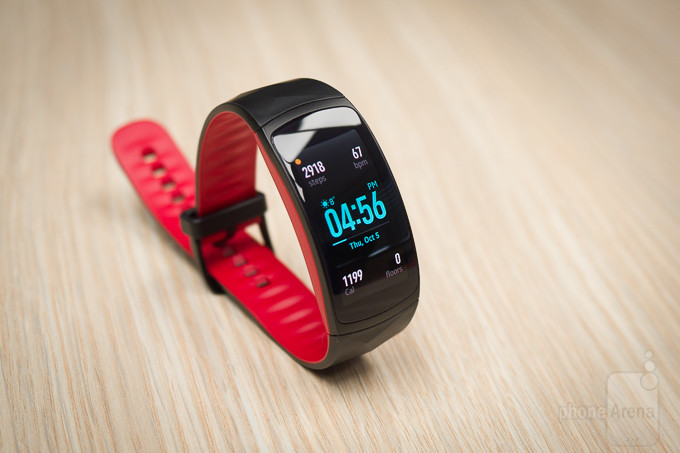 Being almost clone of its predecessor, Fit 2 PRO does not deviate from the well-being design. The tracker is tiny, but wide, light and unobtrusive.

As for the straps, there are a pair of changes. First, two new color options, black and red appeared. They look better than last year's straps.

Secondly, they have improved latches. Last year's trackers often accidentally revealed and fell, but here this problem was solved at the expense of the traditional latch mechanism, which is applied almost at all modern hours.

The interface of the Fit 2 Pro does not deviate from the extreme austerity of its predecessor. Almost all apps, menus and watch faces use a black background. This was probably done to minimize the power consumption of the AMOLED screen. The screen looks like last year, the specifications say the same.

Using the Fit 2 Pro is a breeze thanks to the familiar combination of touch input and two physical buttons on the side. The tracker runs on the Samsung Tizen operating system, the interface consists of a number of applications, each of which is dedicated to one part of the device's functionality. The central home screen contains the main dial and several customizable widgets.

There are occasional stutters when opening and closing applications, but in most cases the interface is fast and responsive. The only exception is the gesture on the screen to turn it off, which periodically does not work.

The device also offers some rudimentary smartphone controls. There is a notification center that allows you to respond to text messages with a predefined set of responses, there are built-in audio controls. You can answer phone calls, but there is no microphone or speakers in the case. Calls can be rejected if necessary.

The Gear Fit 2 Pro does not claim to be a smartwatch, as evidenced by the range of available apps in the Galaxy Apps store. There are more than 3,000 of them, says Samsung, but most of them are just watch faces. Other apps include the Spotify music service, which brings a new feature to the Gear Fit lineup: you can now download playlists to internal storage and listen to over 500 songs offline via Bluetooth headphones. This makes listening faster because streaming music via a smartphone or a Wi-Fi network requires a long download time.

It is natural that the most important part of the fitness tracker is the functionality for fitness and physical activity. Gear Fit 2 Pro perfectly copes with this task, there are modes for pedestrian walks, running, cycling, yoga and other types of activity.

All of them can be run manually or allow the device to automatically fix their beginning, which perfectly triggers, but may irritate. If you walk on foot, this does not mean that each time you need to run fitness tracker.

Key new functionality, sailing tracking, works in the embedded application Speedo ON, so it is impossible to just jump into the water and wait that the fitness tracker learns about it. Surely swimming lovers will be happy to recognize the style of swimming.

Ease of work and autonomy

Availability of Wi-Fi support means that the device is not Be sure to constantly connect to the smartphone, but deeper access to the data will not cost without it. The Samsung Health application works great on Android, but it is not on the Apple iOS platform, so the iPhone (128] should be content with the tracker interface.

As for autonomy, the official assessment of Samsung in 3-5 days is too optimistic. In fact, three days is a maximum, to charge the device is to be regularly, as before last year's model.

Since Fit 2 Pro will often be used outdoors, the question of the visibility of the screen in the sun is open. This parameter is at a high level, although the curved reflecting glass sometimes creates problems.

One thing is obvious: the word Pro in the title applies only to the swimmers. For all other advantage of the new model over last year's lies in a slightly more class design and support for the Spotify service, which is not relevant to Russia (if you do not use proxy).

In this case, it is impossible to say that the fitness tracker turned out to be bad: it is still one of the best models. But if you don’t swim, there are many alternative options on sale that can do the same and at the same time cost less than 12,000 rubles. On Yandex. Market the device is not yet available, and Samsung Gear Fit 2 costs 11,500 rubles.

If you're looking for a device that can do it all while still looking stylish, the Samsung Gear Fit 2 Pro is your option.

Best set of icons for Android

How to change the keyboard on android?