The South Korean company is trying to capture all the niches in the mobile device market, so the Samsung Galaxy Note 8.0 tablet did not become a surprise. The compact gadget follows the same design rules as other high-level Korean manufacturer devices. The novelty received S-PEN and a large number of exclusive programs.

Below we give the main characteristics of the tablet.

All this is very familiar, is it not true? Samsung Galaxy Note 8.0 is more than just converted Galaxy Note II. Or perhaps this is the abbreviated version of Galaxy Note 10.1? The only difference lies in the new features of the stylus S-Pen, which are built into the Android 4.1.2 OS and the last TouchWiz interface.

The screen is made using TFT PLS technology and has a resolution of 1280x800 pixels. It looks more like last year's devices. Pixel density - 189 PPI. We hoped to see, of course, Super AMOLED-matrix and turned out to be a bit disappointed. In principle, the screen is not bad, but with the average contrast, so it is impossible to be called a premium display.

As for the camera, this is a 5-megapixel matrix that can shoot a Full HD video with a frequency of 30 frames per second, and also equipped with a LED flash.

In the design of the South Korean company did not risk, adhering to the style of Galaxy S III and Galaxy Note II. Finishing the tablet makes it similar to the flagship smartphone.

The weight of the device is 338 gr, it is comfortable in hand, but still remains a bit harder than the iPad mini.

S-PEN remains as useful as always, irreplaceable to select, highlight and edit text and images. It is also capable of doing the same tricks as on Note 10.1.

There is also an IR transmitter that allows you to use the device as a remote control control.

Inside the tablet is a barbecue battery with a capacity of 4600 mAh, which is not so bad for the device of this size.

We now understand with the performance Samsung Galaxy Note 8.0. The tablet works on the EXYNOS 441412 Quad chipset with the 4-core Cortex-A9 processor. This, of course, is not the last word in mobile technique, but we still decided to test it. 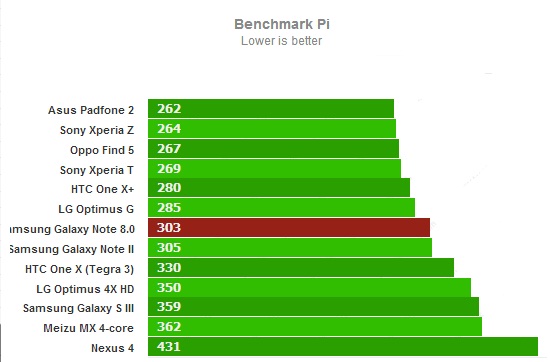 Amazing turned out to be the fact that in the tests of Antutu and Quadrant our subject significantly overtook Galaxy Note II. 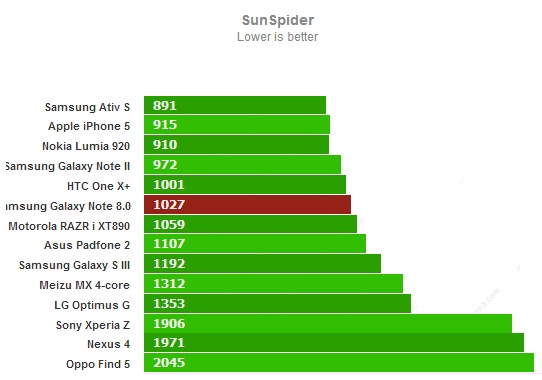 In general, the results turned out to be quite expected. In Galaxy Note 8.0, the "last year's iron" is used, therefore, it is not in a state with new flagships. Despite all this, the chipset can freely pull the modern software.

For more information about the tablet, we will learn over the coming months, as Samsung Galaxy Note 8.0 should appear on the stores of stores around the world. Also soon we will prepare a more detailed review of the gadget.

Hygiene gadgets: how to properly care for a smartphone and tablet

How to change the time and date on the iPhone?