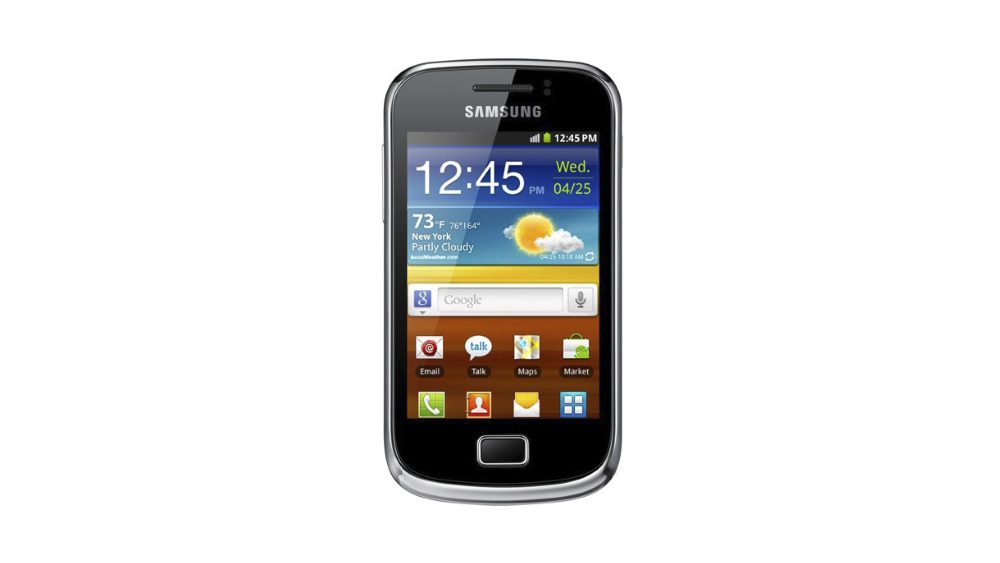 This smartphone was announced quite recently. And how it becomes clear from the name of this model, the smartphone will be a successor of glorious traditions set by Samsung Galaxy Mini. This apparatus refers to the budget class of smartphones, so one of its advantages is, naturally, the price. But, if the cost of goods is low, then you do not need to wait from the device of incredible capabilities. So, about everything in order.

Smartphone received a familiar case from Samsung - plastic, but with a chrome-plated rim on Edge. The case is very ergonomic, it is convenient to hold it in hand. The material is pleasant on tactile sensations. The new decision for Samsung in this model was the possibility of changing the rear panel of the device.

Smartphone is equipped with a Qualcomm MSM 7227 processor with a clock frequency of 800 MHz. Android 2.3.6 gingerbread is used as the operating system, which is quite logical for the stated characteristics.

In the smartphone, 512 MB of RAM is provided in the smartphone. There is a built-in flash memory - 4 GB, which can be increased with memory cards MicroSD (max. Volume of up to 32 GB).

The screen of the apparatus has become more than its predecessor. Now the size of the diagonal of the display is 3.27 inches, it is made using TFT technology and has a resolution of 480x320 pixels, which is quite a bit. The number of display colors is 16777216 colors, just how do they think?

It is also worth noting one of the minuses of the screen - very small viewing angles.

In Samsung Galaxy Mini 2, a weak 3 megapixel camera is installed, which allows you to take photos with a maximum resolution of 2048x1536 pixels.

The camera can shoot video with a resolution of 640x480 pixels at a speed of 30 frames / second.

In the smartphone there are built-in Bluetooth interfaces, Wi-Fi, there is support for the communication standard - GPRS.

The device has pre-installed audio and video player.

In the smartphone, the Li-ion battery with a capacity of 1300 mAh is used, which cannot be attributed to the advantages of this unit.

The price of SAMSUNG smartphone Galaxy Mini 2 is about 250 euros, depending on the country of implementation.

How to cancel android subscription

How to remove root rights with Android?