At the beginning of this month, a novelty appeared on the Russian market of smartphones - Samsung Galaxy Grand 2 SM-G7102. A novelty can be called long-awaited, as its announcement took place in November last year. The device has common features characteristic of the Galaxy line and at the same time, the phone has quite powerful technical characteristics. One of the important advantages of the smartphone is the use of two SIM cards at the same time.

SAMSUNG GALAXY Grand 2 classic housing, it is made in the form of a rectangle with rounded edges. Despite the major dimensions, the phone is quite comfortable in hand and is convenient in control. At the moment there is only a version of white, later a model from black plastic will be on sale. At the edges of the smartphone, an edging from a shiny frame made under chrome passes. As in most GALAXY models, the power and volume buttons are located on the right and left end. On the top of the phone there is a jack for connecting headphones, and the Micro-USB connector is located at the bottom of the phone. On the front of the phone there are control buttons: two sensory and one mechanical. 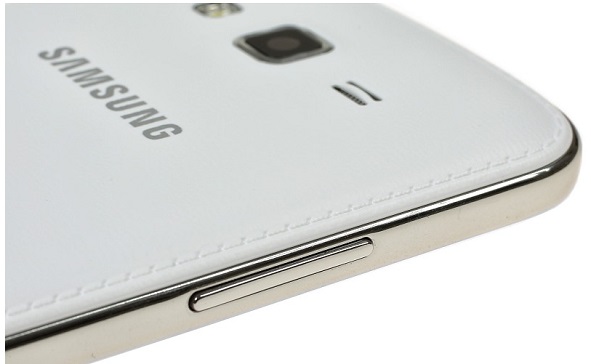 The back cover, as in Galaxy Note 3, is decorated under the skin, which generally looks quite attractive and until the user has become accustomed. On the back of the phone there is a chamber window and a dynamics grille.

Our test smartphone is well and shows the result above average. In the Samsung Galaxy Grand smartphone 2 G7102 The 4-core processor of the Qualcomm MSM8226 Snapdragon 400 is installed, with a frequency of each kernel 1,2ggz and the Adreno 305 graphic system. The amount of RAM in a novelty of 1.5 GB. Internal memory - 8 GB, the machine also supports the installation of a memory slot to 64 GB. These parameters are enough for the use of any applications and games.

The new model is controlled by the Android 4.3 operating system. SAMSUNG - TOUCHWIZ is installed.

The user has the opportunity to create seven desktops and place widgets and application icons on them. And also the possibility of multitasking appeared for the first time, now you can open 2 applications simultaneously on the screen and for example, copy photos from the gallery immediately to the mail application.

The model is equipped with modules Wi-Fi, GPS / GLONASS and Bluetooth. Wi-Fi is good and without interruption keeps a signal, no problems when transferring data does not occur. Unfortunately LTE and NFC is absent.

The device supports the operation of two SIM cards (Micro-SIM), switch between which you can from the alert menu. It is possible to configure SIM-card priorities, that is, it can be used for calls, and use another to use for data transmission. 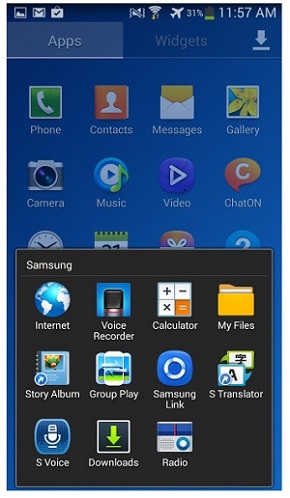 compared to its predecessor, in the Grand 2 model, the display became much better. The TFT panel of 5.25 inches and a resolution of 1280x720 is used as the screen. Screen image color bright and saturated. The image is perfectly visible in the sun, regardless of the corner of the review.

Two cameras are installed in the phone: Frontal and basic. The front camera is absolutely ordinary and has a resolution of 1.9 mp. Resolution of the matrix of the main chamber 8 MP. The camera is equipped with autofocus and LED flash. The camera makes high-quality photos with a resolution of 3264 × 2448 and records video in Full HD format. As in other Galaxy models, the camera has several shooting modes.

Multiple examples How the Galaxy Grand 2. Camera is removed

Battery Capacity set in Smartphone Samsung Galaxy Grand 2 - 2600 mAh. With the active use of the apparatus, playing games, using applications, and performing other operations, the full battery charge is enough for about one day of work. With an average load level, the phone will work for about two days without recharging. In order to fully charge the battery, it will take about three hours. 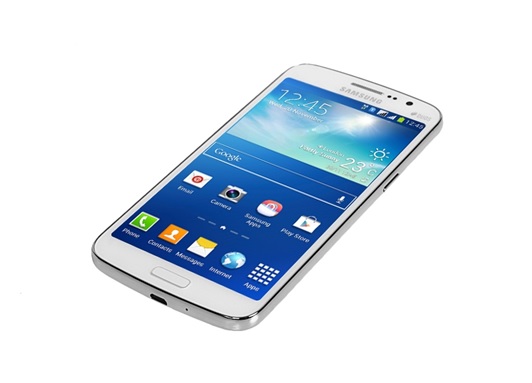 Compared with the previous version, the smartphone was better in performance and the volume of the battery. A little on the best side has changed design - the back cover has acquired a more pretty view. With these changes, pleases that by price, the device from the first version differs approximately $ 80.

How to collect gaming pc?