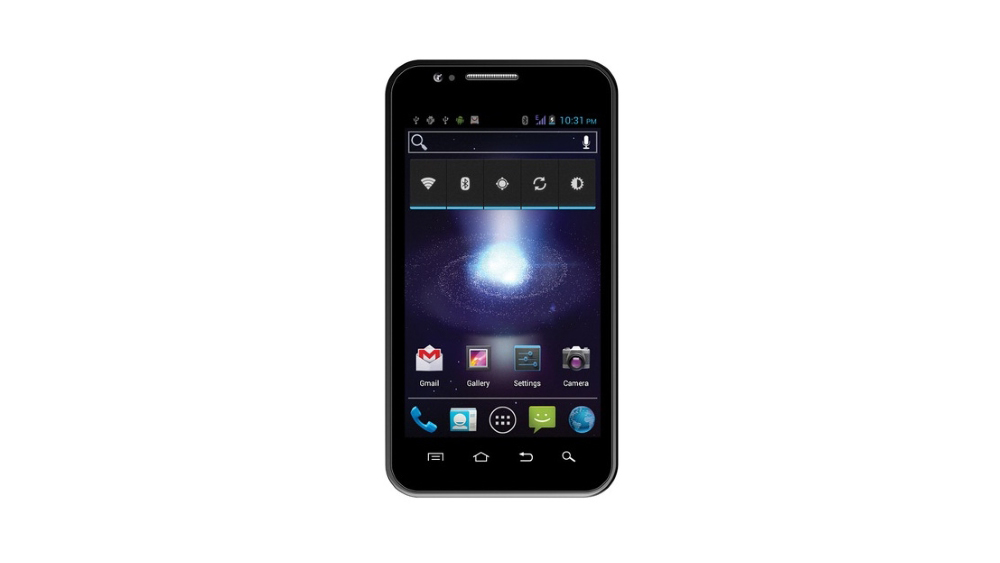 More recently, the Ritmix RMP-500 was announced, which is the first sign of the company in the field of smartphone production. The device received support for two SIM-cards, 3G networks and a large display. In our mini-review, we will try to tell you in detail about the characteristics of the device.

Ritmix RMP-500 is made in the form of a classic plastic monoblock. The design does not have any "zest", this is a simple budget device. Almost the entire front surface is occupied by a display, under which there are four touch-sensitive control buttons, and above it are a speaker and a front camera. On the side are the power / lock button and the volume rocker, on the bottom you can see the output microUSB. On the back of the device are the camera, LED flash and company logo.

The gadget is assembled soundly: there are no backlashes, there is a slight creaking when you press hard on the frame around the screen. In principle, the smartphone is quite convenient to use, despite the considerable dimensions.

Ritmix RMP-500 is based on a 1-core processor MTK6575 ARM Cortex-A9 1 GHz, PowerVR SGX531 Ultra graphics accelerator, 512 MB DDR3 RAM and Android 4.0 ICS operating system. The characteristics of the gadget are very weak, but it copes with the solution of ordinary tasks quite easily, and resource-intensive applications immediately cause certain problems.

The device has 4 GB of built-in memory, which can be expanded using microSD/SDHC cards (max. 32 GB).

In Ritmix RMP-500, a 5-megapixel capacitive TFT display with a resolution of 800x480 pixels and support for 5-finger multitouch are used. Quality, as is clear from the characteristics, is quite average: sometimes the colors are distorted, the clarity is lost, the survey angles are narrow, the fading on the sunlight is strong. Well, it is difficult to expect such sizes from the screen and with such a resolution of good image quality.

Ritmix RMP-500 is equipped with a 5-megapixel basic camera with LED flash. It allows you to take photos with a maximum resolution of 2592x1944 pixels and record video. The quality of the resulting images is average: the colors, in our opinion, are obtained unnatural, the places are lost, with poor lighting, the colors are distorted very much, despite the use of the outbreak.

The gadget also includes a 0.3-megapixel frontal chamber for of video calls.

The novelty has a lithium-ion battery capacity of 2,000 mAh. It is enough for 6 hours of work on the Internet via Wi-Fi or 3G, by 4.5 hours of video viewing and for 18 hours of talk mode.

How to choose a smartphone: inexpensive, but good?

What is Airbnb and how does it work?