Today in our mini-review We will look at the smartphone TeXet TM-5377, where the first two digits in the title indicate the display diagonal, and the second pair of numbers - Belonging to a certain generation of gadgets. Note immediately, not to return to this in the article that the gadget supports the operation of two SIM cards.

The design of the gadget is not remarkable. A display is located on the front surface of the device, the front camera and speaker are located above it. The back cover is made of Soft Touch plastic and snaps through the entire perimeter of the case. Here you can see the main chamber with the LED flash, slots for the external speaker and the company logo. On the upper end there are 3.5 mm headphone output and the on / lock button, on the bottom end - the microusb connector, and on the side - the volume key and the camera shutter button.

Assembly TeXet TM-5377 is well done well: there are no screens and hoptes. 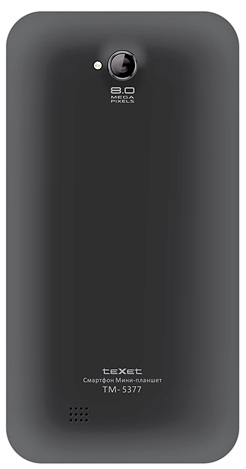 TeXet TM-5377 is based on a 2-core MEDIATEK MT6577 processor with a clock frequency of 1 GHz, the PowerVR SGX531 graphics accelerator of RAM. These characteristics allow you to cope with most modern applications, although, of course, should not count on the fact that it will pull the resource-intensive applications and 3D games.

The device operates on the basis of the Android 4.0.4 Ice Cream Sandwich operating system.

Integrated memory - 4 GB, but it can be enlarged using the MicroSD / MicroSDHC cards.

in TeXet TM-5377 uses 5.27-inch IPS-display with a resolution of 960x540 pixels and Support for 5-finger multitouch. It uses NO AIR technology, that is, the air layer is missing between the glass and the matrix. This made it possible to get deep black and excellent viewing angles.

TeXet TM-5377 is equipped with an 8-megapixel base chamber with LED flash and autofocus. It allows you to take pictures with a maximum resolution of 3264x2448 pixels. Note that the quality of the photos received is good: natural colors, are distinguishable small parts.

The smartphone is also equipped with a 2-megapixel front camera for video links.

TeXet TM-5377 has at its disposal a lithium-ion battery with a capacity of 2700 mAh, which, according to the manufacturer, is enough for 16, 2 hours of work in conversation, up to 540 hours of autonomous work in standby mode and up to 7.5 hours - when cutting on the Internet via Wi-Fi or 3G.

The best stabilizers for action cameras

The concept of flagship smartphones for $ 400 is dead