The company Samsung announced a new tablet Galaxy Tab 2 with a 10.1-inch display in February 2012, and in April it should appear on the shelves Russian stores. In this review we will talk about the basic characteristics of the device, as well as denote the main differences from the Galaxy Tab 2 with a 7-inch screen.

The design of the plastic housing is very elegant with unique features. It is worth noting that it is quite convenient to work on the tablet, and according to tactile sensations, the case material is very pleasant.

The front surface of the tablet basically takes the display, and the camera is located on the back side. 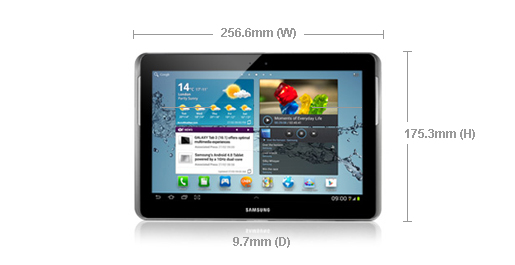 In the tablet Galaxy Tab 2 (10.1), a 2-nuclear processor Ti OMAP 4430 was installed with a clock frequency of 1 GHz. RAM provided 1 GB. Two options for a tablet computer will be available - this is with built-in memory in 16 GB and in 32 GB. Also provides a slot for memory cards MicroSD, with which you can increase the amount of memory by 32 GB.

The device operates on the basis of the Android 4.0 Ice Cream Sandwich operating system, which introduced the Samsung branded shell - TouchWiz. With the characteristics of the processor and RAM, it should be expected that work with Samsung Galaxy Tab 2 will be quite productive with real support for multitasking.

From other communicative capabilities, we note support for modules Wi-Fi, Bluetooth 3.0, USB 2.0, A-GPS and GLONASS.

The Samsung Tablet Galaxy Tab 2 has an ordinary set of applications: games, audio and video players.

The device is equipped with a 10.1-inch screen, made using PLS TFT technology, which has a resolution of 1280x800 pixels. Images on this high resolution screen look colorfully, bright and alive. So you can consider this tablet, as a competitor The New iPad precisely in terms of the quality of the display.

In the Samsung Galaxy Tab 2 (10.1) tablet (10.1) there is a 3.1-megapixel camera, which is located on the back of the apparatus. The maximum resolution of photographs obtained by this camera is 2948x1536 pixels. The quality of photos is quite decent. Soon we will publish an article dedicated to a fully chamber of the tablet with examples of pictures.

The camera allows you to record video in FULL HD format C frame frequency 30 per second.

There is also a frontal VGA camera for video link.

The device is equipped with a Li-ion battery with a capacity of 7000 mAh. This indicator has grown significantly compared to the tablets of the first Galaxy Tab series.

5 actions that will make you victim of the extortionist virus

How to unlock android if you forgot the graphic key?

The best speakers for outdoor use