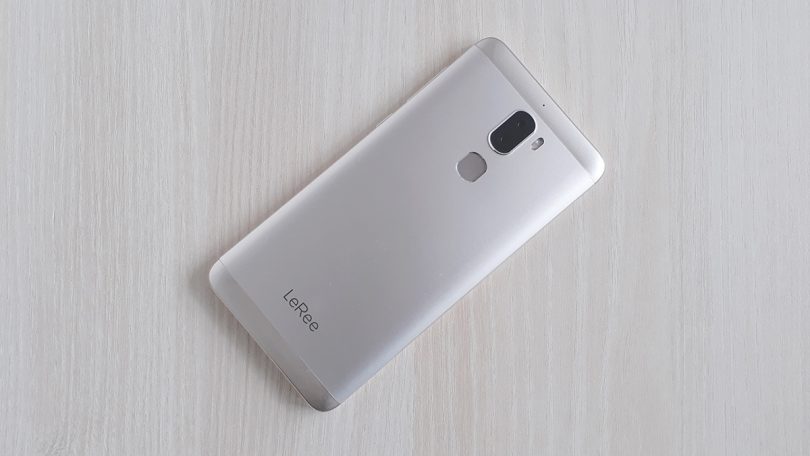 LeRee Le3 is a smartphone that the manufacturer has high hopes for. Can the apparatus justify them?

LeRee is not another Chinese flash brand or a company that will show off a couple of flashy smartphones, make a lot of big promises, and then get bogged down in the abyss of competition. LeRee is a Russian subdivision of the already well-known company LeEco. In the domestic market, you will no longer find smartphones branded LeEco - only LeRee. The Le3 is the first model released under the new brand name.

Why LeEco would create such confusion is not entirely clear. There is an opinion that the company has figured out how to get out of the crisis it has fallen into, and restructuring is an important part of the idea. The fact that LeEco "put" it on Le3 in such a crucial period for itself allows us to conclude: the manufacturer considers this gadget the best of its current products - primarily from the point of view in terms of the ratio "price-quality", because the device costs only about 10 thousand rubles.

Does the Le3 have a good chance of justifying the advances given to it and is it really that good? We will talk about this in our review.

Gadget came packed in ascetic performed (but, it is necessary to recognize the tasteful) dense box, inside of which besides the smartphone itself, only charging, laconic instruction and paper clip for out Dress of tray under the SIM card. 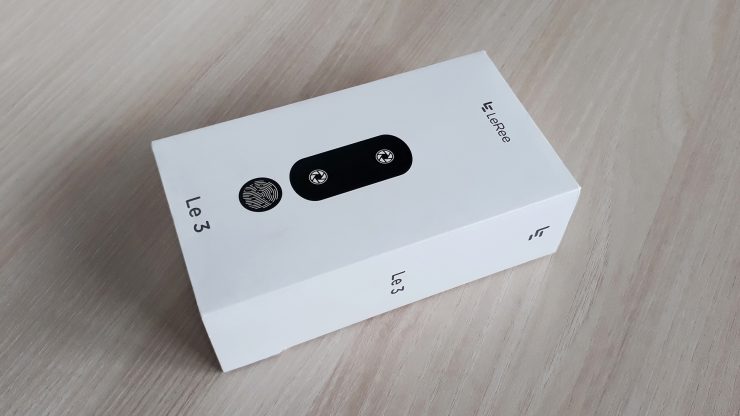 The slot is not combined, however, in the case of LE3 it is minus. The flash card in the smartphone will not work in any way - 23 GB of free built-in memory will have to be satisfied. 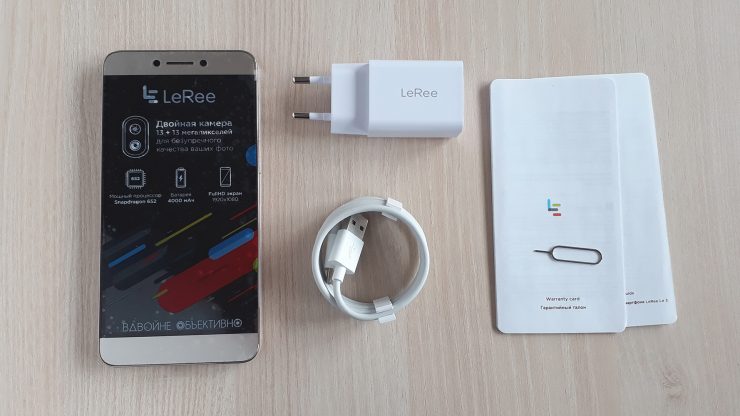 is that LEREE LE3 - Almost exact copy of the Coolpad Cool1 smartphone, published in 2016, the manufacturer did not blame only the lazy. But we simply do not raise your hand to throw in the garden Leeco one more stone, because the model LE3 looks like that the spirit captures. It looks the gadget at all is not 10,000 rubles, but in the amount, at least twice as much.

If you take the LE3 smartphone in gold (in which it arrived at our review), then it will not only Assistant in everyday affairs, but also an attribute of luxury. Alternative coloring option - white. In black execution, the gadget is not released.

The back cover of the smartphone is made of aluminum - like the volume rocker and the POWER button. Inserts in the upper and lower parts of the case are made of plastic - antennas are hidden in them. By the way, these inserts did not spoil the design and even, on the contrary, allow the smartphone to look very original.

The location of the mechanical keys and connector can be called traditional. On the left placed a tray for a pair of SIM cards. On the right - the volume swings and the screen lock button. At the bottom there are speakers, microphone and attention! - Support USB TYPE-C. Finally, a standard jack 3.5-mm, as well as IR port, was placed on the top end. Yes, with Leree LE3 you can manage home appliances!

The flattering review deserves not only the design of the smartphone from LEECO, but also its ergonomics. While the gadget is equipped with a rather powerful battery, you will not call it heavyweight: the thickness is slightly more than 8 mm, and the weight is only 172 grams. In the hand, the machine lies like this: at least all day shall selfie in Instragrams and Lazay on the Internet - there will be no brush.

The screen of the LE3 model cannot boast of a complete lack of frames nor the fashionable 2.5D effect, but it does not look like It is important when the quality of the display of the display at the highest level. It seems that items appearing on the screen are not just pictures, it is Something alive ; When you flip the menu, you feel the icons under your fingers almost physically. And if you install the space of space from the system wallpaper folder on the initial screen, it is impossible to tear the eye from the phone.

The display is characterized by the resolution of FullHD, the pixel density of 401 ppi, the level of brightness of 450 NIT - the parameters are not fantastic. The key to high quality image is the absence of an air layer between the display and glass.

The Le3 user will not be able to adjust the brightness, contrast and other characteristics of the picture, but he can choose one of the 4 color modes preset by the manufacturer: LeTV (“ Standard ”), “ Bright ”, “ Natural ”, “ Soft ”. 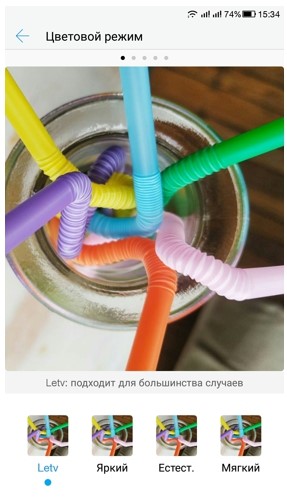 When the soft mode is activated, the blue tints on the screen fade - and as you know, they are the most detrimental to vision.

The LeRee Le3 is equipped with a Snapdragon 652, made using a 28nm process technology, as well as a fairly powerful Adreno 510 video accelerator. On hardware, the smartphone can easily cope with both simple arcade games from Google Play (like Lara Croft: Relic Run) and demanding fighting games such as Tekken and Mortal Kombat X. But Need For Speed: No Limits did not work out: itself the race process runs like clockwork, but in the garage mode, when a lot of data is displayed on the screen plus a visual model of the car, the phone is already starting to freeze.

In benchmarks, Le3 showed more than decent results. When tested on Geekbench, the smartphone scored 1405 points in single-core mode and 2937 points in multi-core mode. This, for a second, is the level of Samsung Galaxy S7 Edge - though not with Exynos, but with Snapdragon 820.

The indicator of the device in AnTuTu is 88,097 "parrots". Far from a record - the leaders of the March rating scored much more than 200,000. But we can definitely say that Le3 is faster than its predecessor with the MTK Le2 Pro chipset, the results of which are a little more modest - about 85,000 "parrots".

LeRee Le3's operating system is an old Android 6.0.1 with a proprietary add-on for the EUI interface version 5.8.018S. The shell has several features at once. Firstly, there is no menu button - the interface assumes the presence of several desktops, on which application icons are displayed. We have already observed this when we tested the BQ 6000L Aurora. Something else looks much stranger: the control center does not appear, no matter what swipes you do - even from top to bottom, even from bottom to top. You can access the Control Panel on the LeRee Le3 by pressing the left mechanical button - just like you can go to minimized applications. 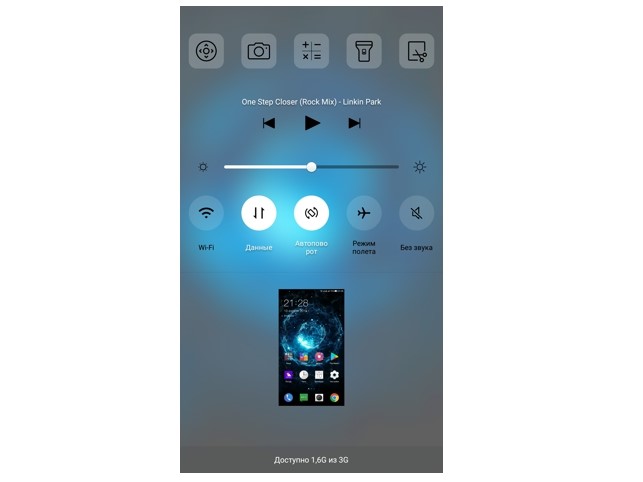 If, for reasons known only to you, you suddenly decide to trade Apple for LeRee, getting used to the new way to call the control center will be painful hard. However, this is the only possible reason for complaints about the EUI shell - otherwise it works very clearly, quickly and without freezes.

We do not recommend rushing to enjoy the fact that the LeRee Le3 has a dual camera. The second module (the one that is auxiliary) is not monochrome and does not contribute to the expansion of the dynamic range. By and large, it is suitable only for creating a bokeh effect.

Photos without effects taken with the main 13-megapixel camera (so-called monophotos ) come out bright and with great detail. HDR is not necessary at all - the image quality does not improve much, but the picture may turn out to be blurry.

Through the basic photo settings, you can only set desired resolution and activate face recognition. If you want more, welcome to Pro mode! Here you can independently adjust parameters such as ISO, shutter speed, exposure, white balance.

]". As soon as the user points the selfie camera at his face, the smartphone begins to flatter completely shamelessly.

Well, how can you not melt here? Note that Le3 also tries to guess the age of the person in the frame - and never makes a big mistake.

Smartphone Le3 supports 4G, but only on one of the SIM cards. According to the results of the inspection on Speedtest.ru, the gadget demonstrated the download speed (data obtaining) over 11 Mbps. 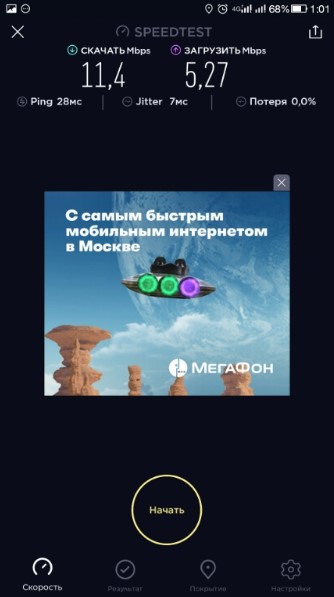 Leree LE3 is devoid of module NFC. This means that through a smartphone for purchases in the store will not be able to pay. Perhaps, the phone was equipped with a telephone IR port, although it, alas, is not equivalent to replacement.

Also, the gadget is equipped with a dactylconus sensor, which is located behind the center, under the cameras. The sensor has a mirror surface and looks very impressive - at least as long as they start to use it. But it costs a finger once again, and more sensor without traces of prints will not see. The user will not have any questions for the work of Dactyloskop, if it is responsible for the fingerprint installation procedure - that is, it will make a finger to the sensor under a variety of different angles.

Leree LE3 is not a music phone, although it would seem that it should indicate the presence of a connectivity 3.5 mm with the support of USB Type-C. When listening to music in the headphones on the basic settings, the quality of the sound "on the triethro" - bass practically no, medium frequencies, on the contrary, too much, detailing mediocre. True, a wonderful equalizer can come to the aid of Melomanan - perhaps one of the most flexible among those that we met your submissive servant on mobile devices.

Music lover can duck on ready presets and, if nothing is satisfactory, proceed to fine manual adjustment of the parameters.

The speaker at the smartphone is quiet - in the subway, for example, you can easily skip the call. It makes sense to abandon the use of quiet built-in melodies and set something "heavy metal" as a signal.

Leree LE3 is equipped with a battery with a 4,000 mAh battery, which in the theory was to provide a 300 hours smartphone in standby mode and 10 hours In conversation mode. For the promises of the manufacturer, we obviously reacted with a fairing fraction of skepticism - after all, devices with FullHD screens and "hardware" from Qualcomm are quite "voracious".

However, in real conditions, LE3 really pointed out himself with great young. Using a smartphone moderately - that is, for several calls a day, half an hour of surfing on the Internet Well, so that you will find yourself in an instrand - you will find that by the end of the work day, the charge has become less than about 25-30%. On one full charge, the device will be able to live 2.5-3 days - however, for this, the user will have to take a number of measures:

If you put brightness to the maximum and constantly keep active Wi -Fi connection, the smartphone is discharged from 100% to zero in about a day.

to the number of main advantages of LE3 include:

There are also cons:

Leree LE3 - not the "killer of the flagships". The smartphone has not so many features that can be called innovative. At the same time, LE3 is the perfect solution for every day, a strong middling, for the impeccable work of which it is worth counting in any situation.

The best apps for shooting Selfie