The fine novelty from BQ can be the most affordable smartphone with support for the unlock function. 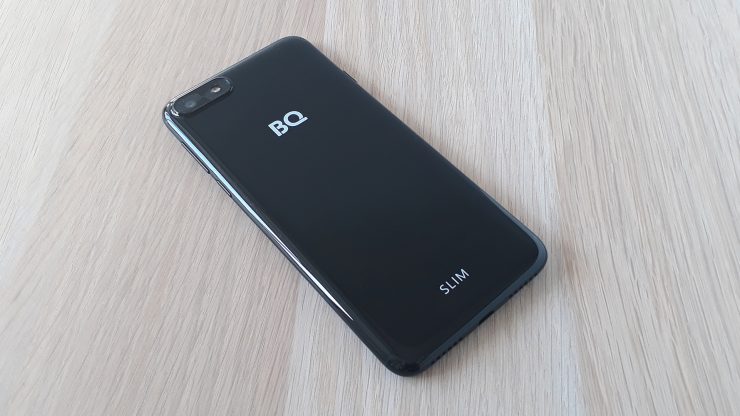 If you judge the model BQ-5701L SLIM exclusively for the price, it can be assumed that the mobile market Replenished one more unremarkable "budget". But it is not worthwhile to hurry to carry out surface ratings - in fact, this gadget is not so simple. The manufacturer contains support for the function of face recognition Face Unlock. At a price of 8,490 rubles, the smartphone will be able to offer an option similar to that that is so proud of the owners iPhone X.

However, the novelty from BQ has other advantages. Read more about what the Slim boast is capable of boasting, our review will tell.

As for the packaging and configuration, BQ remains faithful to itself. Slim came to the review in a thick cardboard red and white box. The main specifications are listed on the back, and an icon on the front informs that the screen of the device has an aspect ratio of 18:9.

Inside the box except smartphone:

A Slim user will have to purchase a cover or bumper separately. But there is no film - it is pasted on the screen by default.

The manufacturer's decision to “dress” the 5701L Slim in a plastic case looks strange and rather controversial. For example, the 6-inch BQ-6001L Jumbo (which we also recently reviewed) is made of metal, although it costs only 500 rubles more than the Slim.

However, even in plastic, the novelty from BQ looks presentable and expensive. We “got” the “black gloss” color option, the back cover of which has a “mirror effect”. There are also black matte and golden matte options.

The glossy lid has the disadvantage of picking up fingerprints. If after a few days of using the gadget you look at it in bright light, you will understand that it does not look so impressive anymore.

Despite its telling "nickname", Slim does not break records at all in terms of in terms of body thickness. The smartphone from BQ is almost 2 times thicker than the thinnest "mobile phone" in the world. Nevertheless, the ergonomics of the BQ-5701L are "on top" - the dimensions of the device allow you to use it comfortably without using your second hand.

The Slim model has a removable cover. Under it are the battery (which can also be removed) and slots for a pair of SIM cards and a flash drive MicroSD.

Sliem is a real gift for retrogrades, which with nostalgia remember times when it did not have to walk with a clip and choose between the second SIM and the memory card. 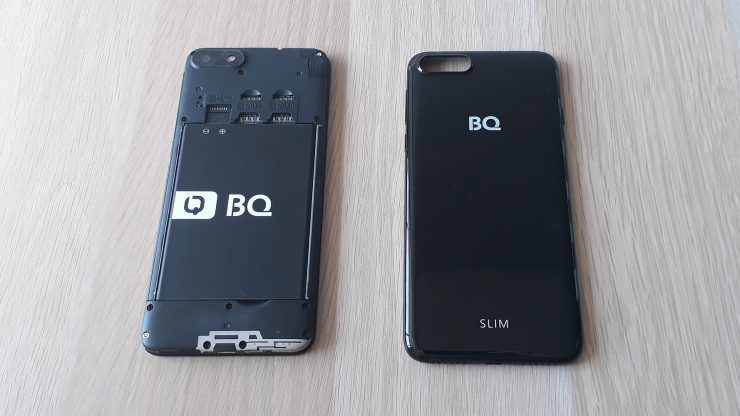 The place on the left end of the housing, where the simok slot is usually located, it takes an additional mechanical button. With it, you can quickly make photos and screen screens, as well as activate the " mode" do not disturb. "

The rest of the placement of keys and the traditional connections. On the right there is a mechanical button " POWER" and the volume keys. On the top end, only the connector for connecting headphones, from the bottom of the connector for recharging (normal microusb ), speaker and microphone.

IPS Display (the one that with the aspect ratio of 18: 9) does not have a side frame And it can boast excellent brightness. It is on this advantage that the focus of BQ - according to the company, the brightness of the screen is 472 cd / kV. m. It is important to note that the display is made using In-Cell technology - that is, the sensors are located directly under the extreme layer of glass. This gives at least 2 benefits: firstly, the colors are more saturated, secondly, the case becomes thinner.

The screen does not really fade in bright lighting. Even on the most sunny day, you can read SMS or view the photo in Instagram, without picking up the viewing angle. But still walk all the time with the brightness at the maximum, we would not recommend users - energy consumption is too large.

BQ SLIM supports the Miravision function, due to which the user can adjust not only the display brightness, but also its contrast, saturation, color temperature.

BQ-5701L SLIM is equipped with a budget chipset and minimum RAM, Therefore, "miracles" of productivity We did not expect from it. In benchmarks Gadget showed mediocre results. In Antutu scored 39 462 "Parrot".

Such an indicator - ordinary for of budgetary smartphones of the company BQ (Jumbo and Shark Pro scored approximately so much same), but low for the modern mobile market as a whole.

Geekbench gave SLIM 577 points for work in single-core mode and 1616 points - in multi-core.

This is the flagship level of 2013. Such indicators had LG Nexus 5 and Samsung Galaxy S4.

Tests in the Games confirmed that productivity is not a bq-5701L horse. You can play Mortal Kombat X, but Marvel Future Fight hangs even on low settings. Asphalt 8 and NFS: No Limits did not load at all. In the case of Asphalt after a 5-minute wait for launching the game, we showed that the body of the device was decently heated at the top, and decided to stop the experiment.

SLIM does not "pull" only heavy games. In order to play in the subway surfers or homescapes, there will be no problems.

BQ SLIM works on "pure" Android 7.0, without any branded "firmware". The version of the operating system, alas, not the latest one, and cannot be updated. However, there is no complaints about the performance and speed of the device - there is no slime and does not slow down, even if you put a third-party launcher. 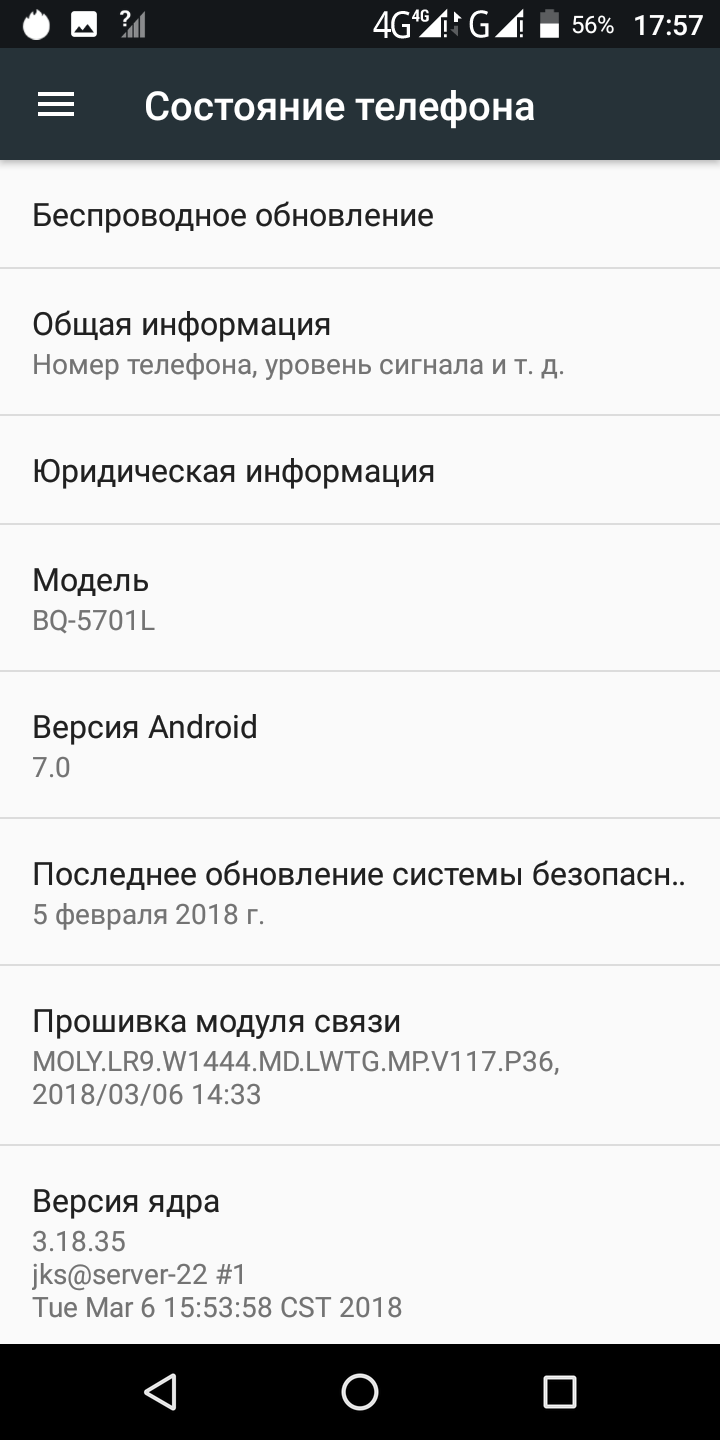 Not a very pleasant moment - the presence of pre-installed programs that for most users will certainly be useless. But "throw stones in the garden" BQ we will not. It is probably due to such a small advertising of the company managed to produce inexpensive smartphones with decent characteristics. So, as a result, the consumer turns out to be "in the plus" - especially since the "extra" applications can easily be deleted through the settings.

Rear 13-megapixel Camera BQ-5701L SLIM with Light F / 2.2 Lights with Natural Lighting We take pictures very decent quality - especially for Smartphone of the budget segment. The unconditional plus can be called a wide viewing angle - 80 °. The disadvantage is that the camera is long focused, because of this, it is problematic to take pictures of the object that is in motion.

Panoramic photos are impressive. To make this, the photographer will have to scroll around its axis.

The camera is flexibly adjustable. The user is available for settings for exposure, photosensitivity, white balance. Adjustment is made before shooting.

Built-in software allows you to edit and ready-made pictures. You can play with the sliders or use the finished filter. In the photoset above there is an example of a snapshot with an extension filter " X-process" (very sensible, in our opinion).

The maximum resolution, which is capable of slim when shooting video - HD (1280 × 720). Please note that the 2: 1 proportion is not respected. Because of this, when viewing the roller on the sides, black stripes remain. Personnel frequency - 30 frames / sec.

The front camera with its modest resolution takes pictures a little worse than the back. So, at least, it seems that you do not start closer - "cubes" becomes clearly visible even with minimal zoom. The self-camera is equipped with an outbreak, although it does not help make a good picture with a lack of lighting. "Hammies" are obtained only with natural light.

There is a mode " Beautiful face", but it is more for fun here.

Home "Fish" model SLIM - Face Unlock function - on a smartphone that got to We for review turned out to be inaccessible. Thanks to technical support BQ, explained: Acepiya will appear along with a wireless update that the manufacturer will release some time after the gadget itself. So we failed to test the effectiveness of the face recognition - but as soon as we succeed, we will add an overview.

Face Unlock function should ensure the safety of the smartphone is not worse than a dactylconus sensor - what is important, because there is no last on the device. Also, the gadget does not support NFC and Wi-Fi at 5 GHz. However, complaints with the speed of the connection did not occur when using Wi-Fi 2.7 GHz.

People who do not count themselves to music lovers, let's just say - the sound is good, alarm clock Do not wait. Further, this block can not read.

Lovers of music will be useful to know that the BQ-5701L SLIM is equipped with two programs immediately designed to improve sound: " besaudenh" and " Audio Enhancer"

" Audio Enhancer" improves sound from the speaker. The program adds the "Presence Effect" by studying the frequencies of the "high middle". " Besaudenh" - for headphones. If you activate this "improvementizer" and continue to listen to the speaker, you will notice that nothing has changed. But in the headphones the sound becomes much more voluminous and alive.

When listening to music in headphones, it is better to turn off the "Audio Enhancer", otherwise there will be a serious imbalance in the direction of high frequencies.

From the point of view of autonomy, the BQ-5701L SLIM does not lose other representatives of the budget segment. The gadget is provided by the battery capacity of 3000 mAh and, according to the manufacturer, can "live" in standby mode up to 10 days. With moderate use (several calls per day + 3 hours of Internet surfing), the battery's energy charged completely is enough for about a day of the smartphone.

Increase the battery life of SLIM, it is possible by activating " of the energy saving mode" - but in this case vibration, geolocation and background data transmission are turned off.

Alas, the smartphone does not support fast charging. To fill the SLIM battery to 100%, you have to leave the gadget at the outlet for several hours. 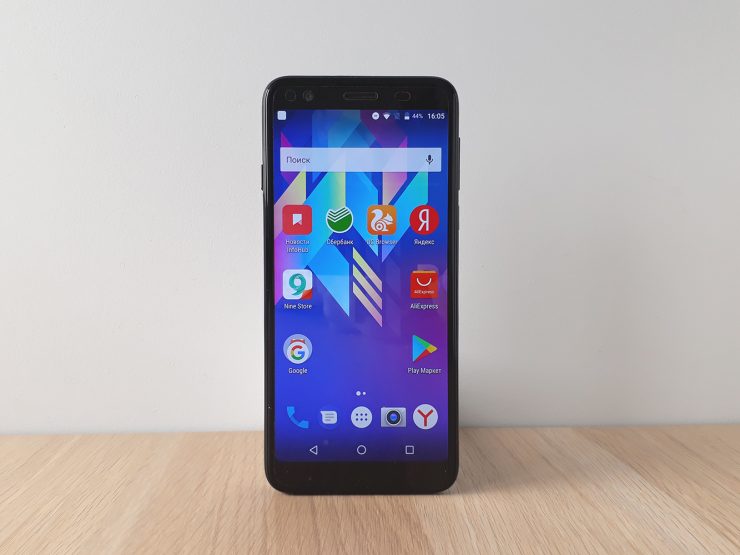 The advantages of the BQ-5701L Slim smartphone can Name:

Disadvantages of the gadget are as follows:

BQ-5701L SLIM liked - first of all with its balance. The smartphone has moderate sizes, comfortably lies in the hand - while it has an impressive screen. Both cameras take pictures not to say amazing, but for the budget segment is very worthy. Fich Face Unlock is a decent alternative to the fingerprint scanner, which, for reasons known only to BQ developers, did not put on Slim.

BQ-5701L will not suit the smartphones to the "torture" with heavy games and demanding applications, but need to be recognized: "advanced gamers" among users of smartphones are much smaller than connoisseurs of refined design. And from the point of view of the appearance, a novelty from BQ will give odds and more expensive gadgets!

BQ-5001L Contact Review: The most affordable smartphone with NFC