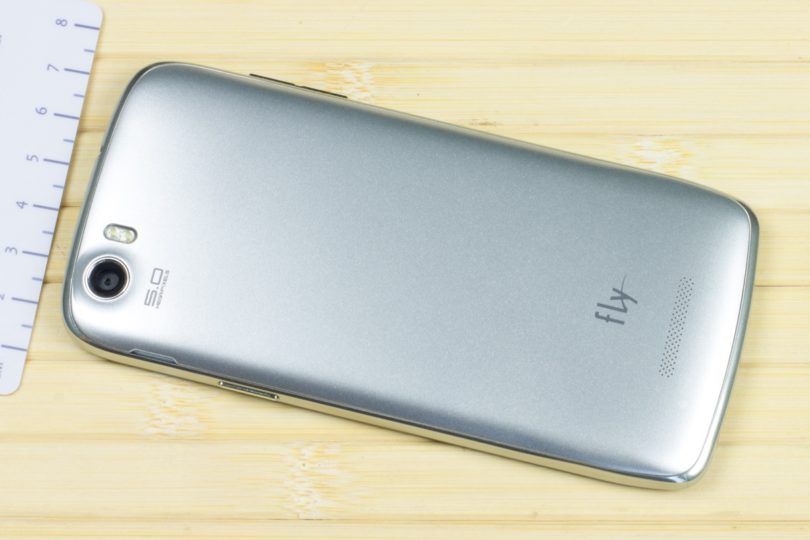 To date, there is a huge number of models among inexpensive smartphones. But, as a rule, they are all strongly inferior to powerful devices with high functionality. But still there are models that for quite acceptable costs can offer a high level of functionality and good quality assembly. And in this review we will look at the new Fly EVO CHIS 1 IQ4405 Quad.

The appearance of Fly Evo Chis 1 differs little from many modern smartphones. But at the same time the quality of plastic and the assembly at a very high level. Details of the device do not creak, the backlash is missing. All components are tightly collected with each other.

The facial part of the glossy, the dust, fingerprints, etc., are quickly becoming noticeable. The back of the phone is matte, it makes unnoticed small scratches, and it is comfortable from this device in hand. Side faces of the smartphone are made under metal. This creates a more solid appearance.

At the top of the front panel there are light sensors, approximation and front camera. The display contains sensory control keys. The dignity of the smartphone can be attributed to its thickness of only 8.9 mm, which will appreciate many, and especially the girls. What to say looks the phone very effectively.

On the back of the smartphone there is a chamber window and a LED flash.

By speed, the phone can be called neutral, some freezes and No problems are observed. Compared to smartphones of its price category, this model works faster. And in comparison with flagship models, of course the phone is inferior in speed. Fly IQ4405 is based on a 4-core MediaTek MT6582M chip with a tire frequency of each 1.3 GHz. Graphic core of the smartphone MALI-400. In a smartphone 512 MB of RAM. The hardware component is made in such a way that the battery charge is consumed more economical. Internal memory in model 4 GB, it is possible to install a card slot microSD.

The apparatus is installed android 4.2.2 operating system. The user interface is almost completely the same as in the classic version of the Android OS. It is possible to run the camera or search online directly from the lock screen. The interface contains seven desktops, each of which can be configured by your preferences.

The device supports the work with two SIM cards (standard type of cards).

Smartphone Fly IQ4405 Quad is equipped with a 4.5-inch display, capacitive type. The display uses technology IPS. The display has a good color reproduction, big viewing angles, the image is perfectly visible in the sun. The automatic brightness adjustment is correct. The font is displayed clearly, it is convenient to read from the smartphone. A small minus is that when viewing video, the brightness is better to adjust manually, otherwise the image may look a little dull.

The phone uses a camera with a resolution of 5 megapixels, with autofocus and flash. Although the camera is completely ordinary, but given the price of the apparatus, the quality of its pictures of good quality. The video is written in 3GP with a resolution of 720, and you can view video formats MP4, AVI, RMVB, 3 GP.

The lithium-ion battery is used in the device, the container of which is 1800 mAh. According to developers, the phone can work up to 400 in standby mode, without recharging and up to 7 hours in talk mode. But, as basically, it happens - the real indicators are less than the stated. Without recharging, when using the Internet turned on Wi-Fi, making some calls, the phone works for about 20 hours. If it is less intensively used, then the charge is enough a little more than a day. For a complete charge of the battery, it takes about 2 hours.

Fly EVO CHII 1 - a budget-class smartphone, and considering its price, this is a very good model. Pleasantly pleased the display of the device, high-quality assembly and hardware. Smartphone qualitatively and securely assembled. Also in the phone a good choice of useful programs established initially. Of the essential drawbacks, you can identify only a small battery volume.

How to restore remote SMS on Android