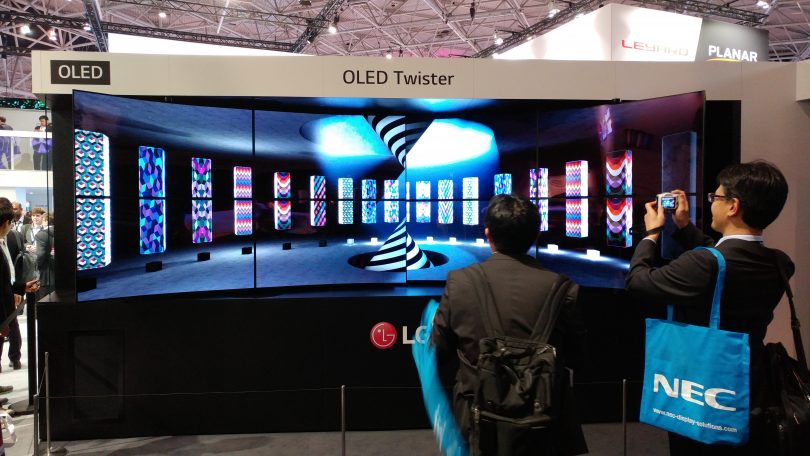 What is the OLED display differ from the screens made by other technologies? Let's find out.

If you go to a store selling consumer electronics, then with a large probability, you can see at least one TV with OLED display. It is because of the technology of screening the screen that such a device will cost very expensive. But why? What are the features of such a display? The answer is in this article

Please note that OLED technology is used mainly to produce large-sized LCD panels. That is, you can most often meet such screens in TVs. In portable electronics, amoled displays are commonly used, which, however, are very similar in general. But the OLED screen is typical for smart hours and fitness bracelets.

As well as the traditional LCD display, the OLED panel consists of a plurality of pixels that form a picture. However, the cheaper competitor also has a backlit layer, there is no such element here. Instead, each pixel is essentially an organic LED that can emit light on their own. That is, the brightness of the OLED screen is adjustable Pixel. At the IPS or TFT panel in any case, the entire area is illuminated with backlight, because of which the contrast is far from the ideal. 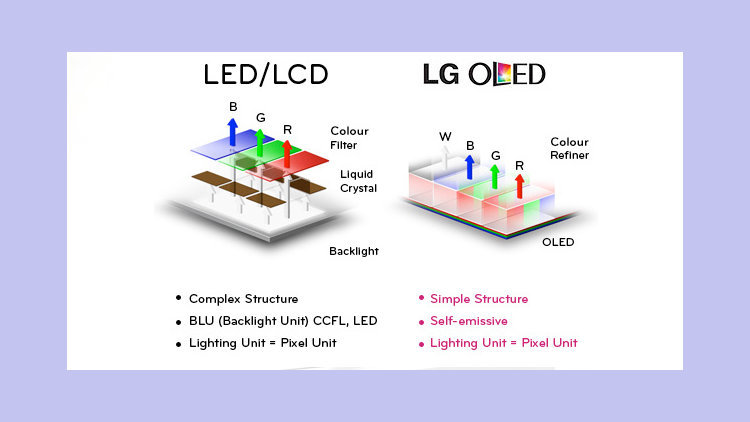 OLED displays consist of a certain number of fine organic films located between two conductors. It is the supply of voltage to conductors that makes the screen emit light. This design allows and without much difficulty bending the display - some manufacturers have already shown panels capable of curling into the tube. It must be precisely the future of OLED TVs. It remains only to come up with how to achieve flexibility from the processor, memory, of the motherboard and other components. 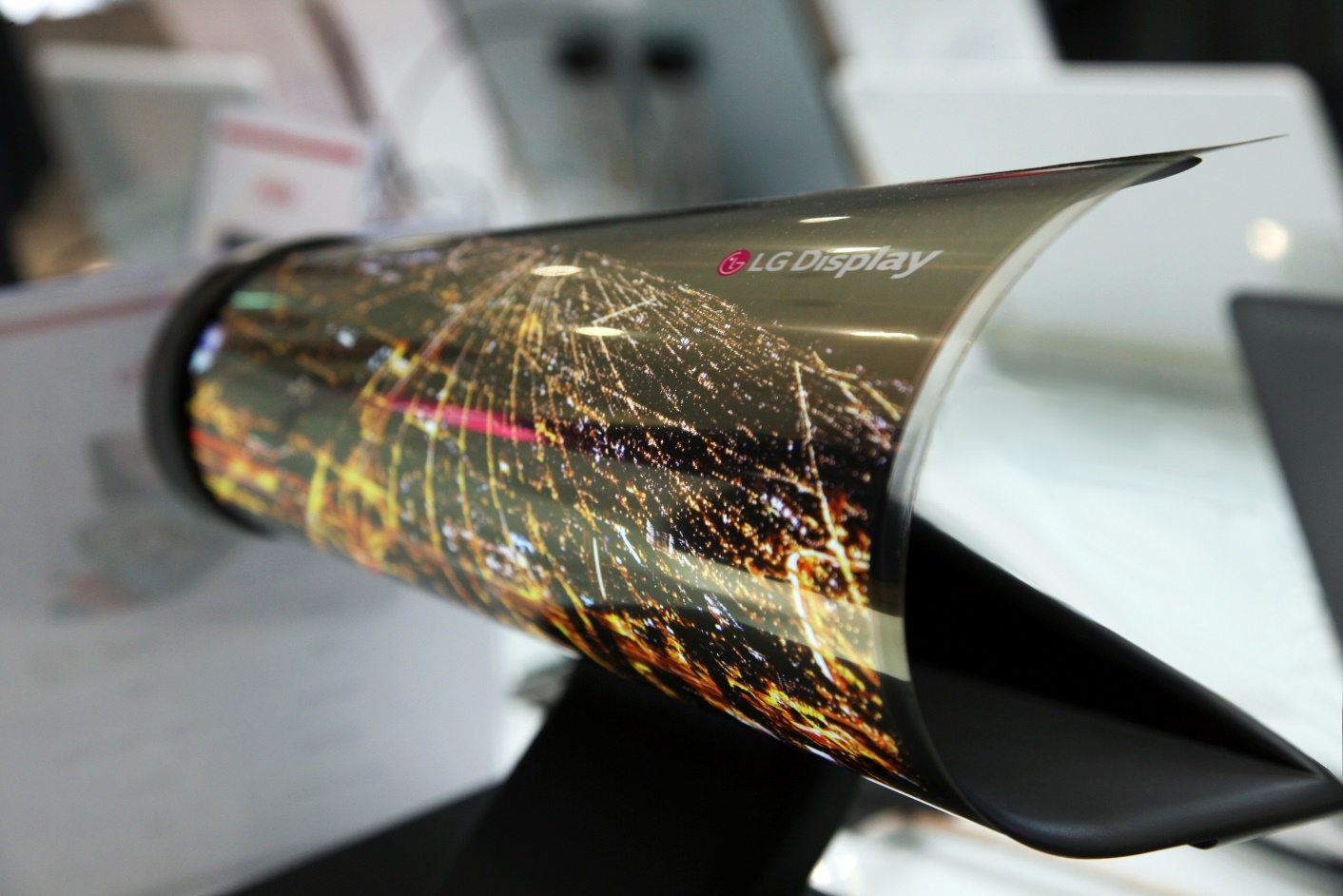 Subpixels on non-ferrous OLED panels may have a different location. Three schemes are now the most popular:

Anyway, and the structure of the large role matrix does not play - in any case, the screen will delight excellent color reproduction, high contrast and less thickness.

The main advantages of OLED

There are many reasons for which OLED displays will become increasingly popular. 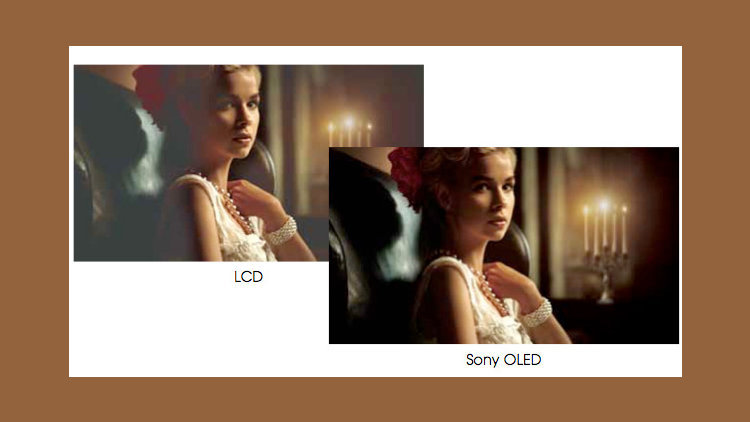 The contrast of OLED screens is very high

in particular, such matrices have the following advantages:

None of the technologies for the production of LCD displays are ideal. If we talk about OLED, the following restrictions come to mind:

If you make a comparison with an amoled matrix, then special differences To see it is impossible. The fact is that it is actually two technologies under the same name. Just an OLED screen, as described above, can display a picture in different ways. AMOLED also implies a single technology, and such displays are strictly compact, which allows them to be used only in portable electronics.

It should also be noted that the amoled screens in sufficient quantities are made only by the company Samsung. As for OLED, various technological giants use this technology to create their screens. However, these words are true only in the case of OLED panels for wearable electronics. If we talk about large-sized displays for TVs, then here the palm is held by the company LG Electronics.

This technology is not new. The first screens based on it were made many years ago. But for a long time, such panels had a limited set of colors, and even more often the displays were completely monochrome. Color matrices began to be used relatively recently - basically TVs are endowed with such panels. Most often, these are very expensive models, the price tag of which varies from 150 thousand to 1.5 million rubles.

Another category of products where the OLED screen is regularly found is wearable gadgets. In particular, now for very little money you can buy smart watches and fitness bracelets. Such devices need such a display in order to reduce the thickness and reduce power consumption. A standard IPS screen cannot be used in these gadgets, otherwise the battery charge will melt before our eyes. The most popular fitness bracelet with an OLED display is theXiaomiMi Band 2. Of course, the screen here is monochrome. But this does not prevent the device from showing all the most necessary information.

Well, smartphones with an OLED display don't actually exist. Almost all manufacturers, without exception, have relied on AMOLED, Samsung's proprietary technology. And this despite the fact that in the early 2000s there were push-button phones with an OLED display. Apparently, many companies have not been able to establish the production of such screens in a compact form factor on an industrial scale. And it didn’t make much sense, because IPS displays were much cheaper, which had a positive effect on the price tag of the final device.

Predicting the future development of OLED technology is extremely difficult. Screens based on it are already able to display an almost perfect picture. Now it's up to the small thing - to establish mass production for several companies at once, which would lead to competition and lower prices for final products. Then OLED displays will begin to appear in those TVs, the cost of which does not make you grab your heart.

AMOLED display: what is it?

IPS Display: What is it?

Does the number of connected devices affect the speed of Wi-Fi?

How rented your smartphone: IP68 and other protection ratings