getting acquainted with the specifications of the smartphone, you can stumble upon the mention of NFC. Let's find out what it is?

Each modern smartphone has several means of wireless communication. For example, LTE is used to transfer data through cellular networks. Bluetooth helps connect a wireless headset. And what is NFC applied for? The answer to this question is contained in this article.

NFC is a way of transmitting data in a very short distance. That is, the radius of the action of such a connection does not exceed 10 cm. This is the main difference between the NFC technology from Bluetooth driving up to a distance from 1 to 10 m. That is why this feature cannot be used to connect wireless headphones and other similar purposes.. The NFC module is sharpened for other actions.

Technology is based on RFID radio frequency identification. It turns out that, first of all, NFC serves that the electronic device understands which gadget to it was attached. But the implementation of technology is such that both objects should be active. This is obliged to be only a device with which information is read. Therefore, bank cards with the so-called NFC label were now widely distributed - it is passive, while the terminal is already equipped with an active NFC chip (otherwise he would simply could not consider information).

Initially, this technology was created to quickly conjugate two electronic devices. The fact is that identification by NFC occurs markedly faster than Bluetooth - the bill goes to the tenths of a second. Each smartphone contains an NFC chip with unique identification information. When you apply it, for example, to an action chamber, then that understands that it is your gadget. As a result, the process of configuring the application for remote control is noticeably accelerated.

The module functions at a frequency of 13.56 MHz. Large data volumes are not transmitted through it, since the speed varies from 106 kbps to 848 kbps.

In which devices is NFC support?

Gradually, the NFC chip receives an increasing amount of electronic gadgets. However, somewhere its use may be limited to programmatically. For example, in iPhone, the module is present, but it is used only for contactless payments through Apple Pay. To solve other tasks, it cannot be used. That is why the connection of wireless accessories to Apple technique is carried out in the old manner. At least it was at the time of writing the article. It is possible that in the future "apple" gigant will revise its attitude to NFC.

Active NFC chips are found in the following devices: 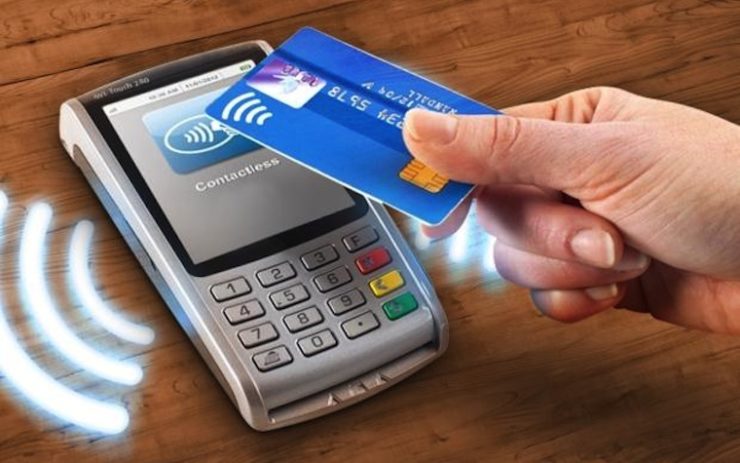 As for the passive NFC, they can To be equipped:

Of course, this is not a complete list, since experiments with technology continue.

Why does NFC are used most often?

We have already told about a fairly popular method of using NFC - fast synchronization of two devices with each other. And if earlier than most often users have connected the smartphone and the camera, now in most cases NFC is required to quickly determine the headphones, of smart clocks, of fitness bracelets and other accessories useful for phone.

Also with NFC, the contactless payment method is implemented. Some bank cards possess the corresponding label. Moreover, you can pay for the goods and a smartphone if the user is registered in the Android Pay. An exception to the rule is Samsung Pay - this technology uses a special magnetic field (MST) instead of NFC.

Another scope of application relative to new wireless technology is labels. They can be supplied with a smartphone, insert with devices from the Smart House series, or sold separately. For example, an NFC label can be equipped with a smart lock - it is enough to attach a smartphone or a special key chain to open it. Also, the NFC label can lie somewhere on the table. In this case, the nature of its use is programmed by the user by the special application. For example, a smartphone next to this label can be configured to turn on the music player or some other actions.

How to use NFC?

In the use of any wireless technology, there is nothing complicated. NFC is no exception to the rule. You can just activate this chip in the settings. In the case of modern versions of Android, this is as follows:

That's all! If you want to pay for your purchases with your smartphone, get ready to visit the appropriate subsection. You will also have to include unlocking on a pin code or scanning a fingerprint - for security purposes, you will not provide other selection.

In the future, the user does not require any special actions. Wanted to make a purchase? Unlocked the smartphone and attached it to the terminal. Wished to configure the connection with an action-camera? Run the appropriate application and put your smartphone to the camera. In short, all actions are simple and intuitively understood.

Now you know what NFC is. For the first time, this technology appeared inNokia 6131released in 2006. But then she failed to become popular, because there was no relevant infrastructure. Now the NFC function is present in terminals, "smart homes" and all sorts of electronic techniques. If your smartphone has an appropriate chip, then you need to rejoice. But it is not worth upset because of his absence - many people never used NFC at all, without feeling no inconvenience. However, the cost of chip lately becomes less and less. In this regard, a large number of inexpensive smartphones with a NFC module appears on the light.

Have you already tried NFC in your work? Or in your hands yet there were no devices with such a module? Share your thoughts in the comments.

The best programs for accounting for Android expenses

How to restart iPhone?