Is it possible to make a gadget bulletproof for only 350 rubles?

On the Internet there are legends about a certain miracle, the price to which on Aliexpress - 2 dollars. You apply it on the screen, and he becomes strong as the sword of Eccalibur. And they will not damage such protection either the blows of the hammer nor even women's marigolds. The name of this miracle composition is liquid glass.

Entry to this article is not in vain full of caustic skepticism. Reviews about liquid glass for smartphones are predominantly bad. Users of the Coster on what the light is worth marketers and argue that after applying liquid glass not only did not become better - it became worse. Let's figure it out that it represents this composition and why it was so unbelievable by the owners of the phones.

What is a liquid glass for a smartphone?

Liquid glass is an emulsion, which after applying to the screen works under the action of hot air and provides the screen of the smartphone to the ultra-defense. Other "magic" properties are also attributed to the liquid glass - for example, the destruction of pathogenic microorganisms and improving the response of the sensor. The thickness of the film that is formed after the frozen is only 0.0004 mm - that is, it does not see it with the naked eye. The film fills all scratches that were on the screen before, so after processing the gadget looks as if only came off the conveyor. But all this theory - or, more precisely, the promises of marketers.

In Russia in 2020, the composition of Broad Nano Hi-Tech is the most common cost of about 350 rubles.

How to properly apply protective glass?

Included with liquid glass you can find small napkins - dry and wet. First of all, you need to wipe the display with a damp cloth - so we get rid of fat traces. Then go through a dry napkin - so that there are no moisture. The preparatory stage is very important - if it is bad to handle the screen and leave VILLIN, they will go under protective glass and from there you will no longer you. 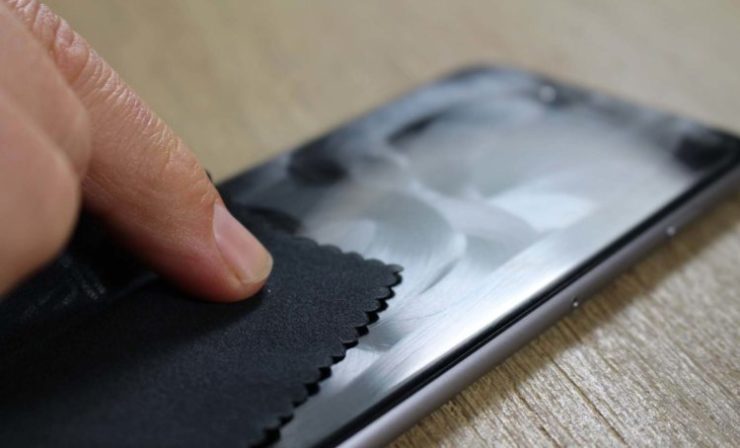 It is not recommended to apply liquid glass at once to the entire surface. Cover the display in parts.

When the entire surface is covered with a composition, we leave the phone at rest for 5-7 minutes. You can speed up the drying process using a hair dryer - put on the minimum mode and send to the phone. It is important to avoid entering the emulsion to the skin - if you still drunk on your hand, immediately wash off with warm water.

Where did the liquid glass come from and what is his real advantages and cons?

For the first time about liquid glass, we all heard after exhibitions MWC-2017, where two German scientists managed to impress the public, presented invention ProtectPax. According to start-ups, ProtectPax increases the gadget strength by 600% and provides 100% protection at all from everything. To prove it, guys wipe on the smartphone with a hammer - and he really remained uncountable.

Due to the spectacular presentation at the exhibition, the startup received support for investors. But after the release of liquid glass, it was necessary to replace the thrust advertising formulations to more modest. Users who decide to repeat the experiment with the hammer at home, were, to put it mildly, disappointed with the result. Thus, 100% protection in advertising has become 99%, but the goods itself remained on the market and even fixed. YouTube has a video that proves that the liquid film cannot resist not only the hammer, but even scissors.

If we generalize the reviews of real users and bloggers on YouTube, a number of advantages of liquid glass can be distinguished, which are indisputable:

The screen protection of the smartphone with liquid glass can hardly be considered reliable. There is no reason to believe that liquid glass really has the properties that are attributed to it. Who and how, for example, is proved that it kills all the pathogenic organisms?

It is full of rollers on the Internet, which in the fluff and dust the majority of arguments in favor of this method of protection. Liquid glass does not provide impact resistance - so do not try to beat the hammer on the screen. Even from strong scratches it will not be able to protect. The main advantage of liquid glass compared to the usual protective is inconsistency. However, users, on the contrary, believe that it is inconvenient: how to be confident in the defense that you do not see? Probably, therefore, interest in the innovation is slowly coming down.

Which processor is better for a smartphone?

How to hide files and folders on android?

How to remove jailbreak with iphone?

MWC 2019: What will be shown in Barcelona