itel specializes in the production of budget smartphones. Model A48 combines some newfangled trends and an extremely affordable price.

itel or iTel Mobile is a Chinese smartphone and mobile phone company founded in 2007. In Russia, it is little known, especially if we are talking about such giants as Samsung, Huawei, Xiaomi and others. All products are entry-level devices that are ideal for undemanding users who are looking for an inexpensive, but at the same time modern “dialer”.

will not work. This review is dedicated to the latest itel A48 model. Let's try to figure out what it can offer the user and whether it is worth attention. 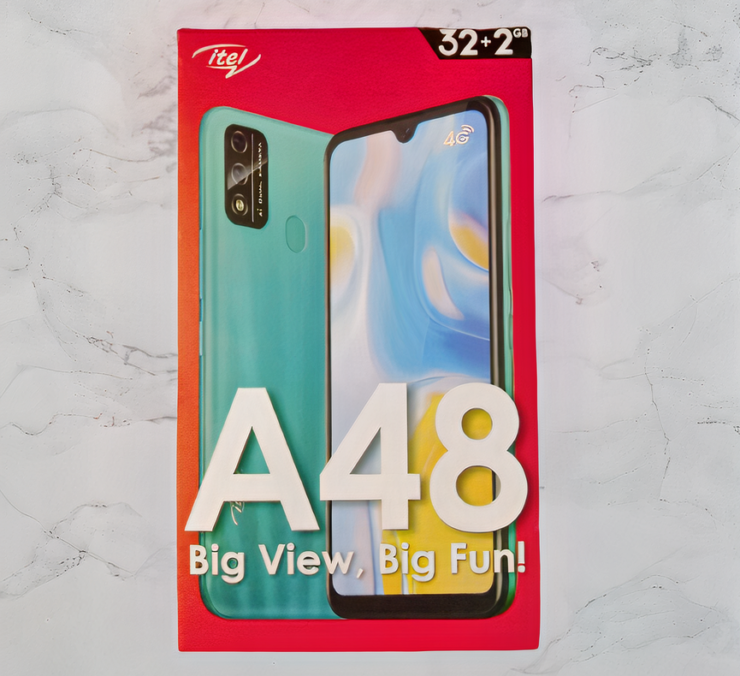 Judging by the packaging, the manufacturer was clearly trying to do something interesting and create x Good first impression of the device by making a colorful and bright box. 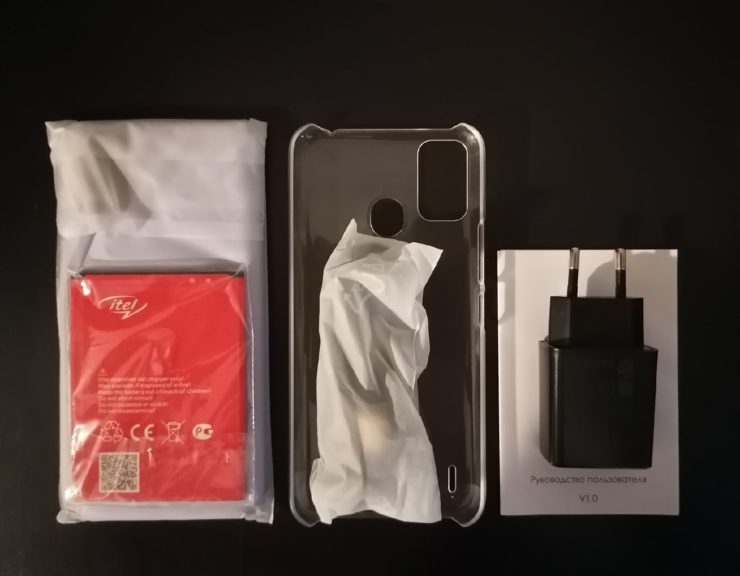 In addition to the smartphone, the package contains the following:

There are no headphones, which some other manufacturers like to indulge in, but this is not the same level: do not forget that we have a budget device in the first place. Many neglect covers, so in this case it was nice to see such a trifle. It is a pity that it is not silicone, but also not bad.

The charger is not to say that powerful, but for a capacity of 3000 MAh the maximum return to 5 W is quite enough. 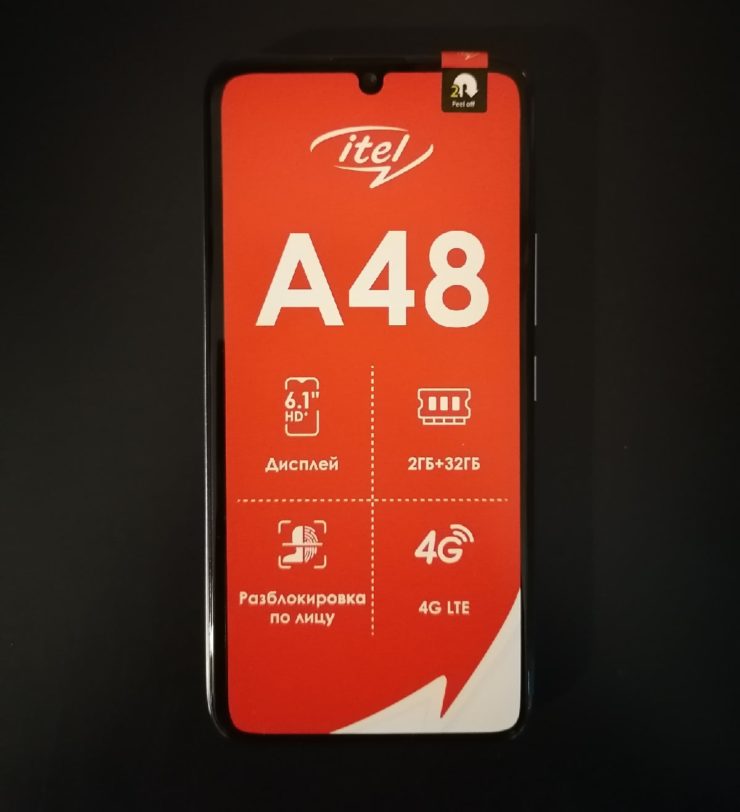 And here is the smartphone itself with The glued factory film on which the manufacturer mentioned the main advantages of his model. Oleophobic coating, by the way, there is no, judging by our "laboratory tests". To purchase, the device is available in two colors: "gradient purple" and "gradient green".

The power button and the volume rocker are located on the right end of the case.

To connect the headphones, a standard MINI jack 3.5 mm connector is provided, which found a place on the upper facet of the device.

The conversational microphone and the Micro USB port is located below.

must be recognized that the device looks much more expensive than it really is. There are 3 eyes at once on the back of the case, which from afar may seem the triple chamber, and a drop-shaped cut on the front side, which was not so long ago "in the trend".

Perhaps the picture slightly spoils only a cheap plastic, from which a smartphone is made, but a more expensive solution and it should not be expected. Metal or glass here, of course, be and should not. 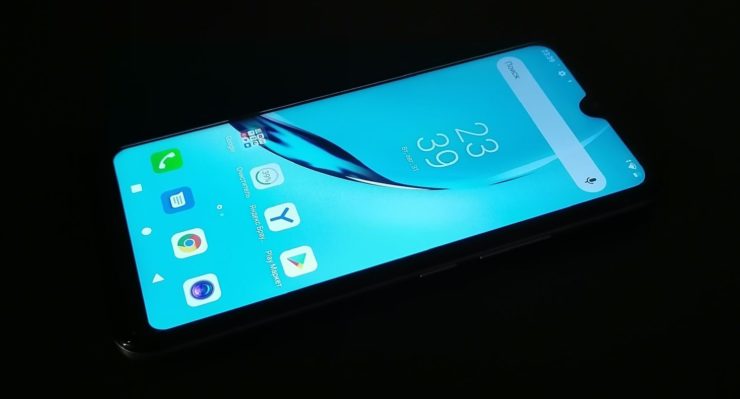 ITEL A48 I received an IPS screen with a diagonal of 6.1 inches. It is standard for a huge number of budget price range devices and even for some mid-level instances size. Support HDR and other features at the display is not declared, so we will talk about what we have.

With a resolution of 1560 x 720 points, which is referred to as HD +, such a diagonal may not seem like the best choice: pixel density is only 281 PPI. This is the average, but it will be enough in order not to experience discomfort when using the device.

And although the manufacturer's firmware provides for a large number of functions that may be useful for many, they did not work on the display settings. For example, here you cannot configure the flower temperature or turn on the blue light filter. In the shell, there are only basic "features" Android 10.

The reserve of brightness should be enough even when working in the sun. In this regard, itel A48, surprisingly, surpassed even the old ASUS ZenFone Max Pro M1, which was recently on store shelves with a price tag 2-3 times more expensive than our subject.

As for the viewing angles, even with a small deviation from the zero angle, a change in the image contrast is observed.

Itel A48 is running Android 10 Go operating system. The signature "Go Edition", which can be seen when the smartphone is launched, means that a light version of the OS is installed here. It is less demanding on resources, so such operating systems are often installed on budget smartphones like ours, so that there are no problems with lags and brakes.

And although there is no specific shell like MIUI from Xiaomi, One UI from Samsung and others, some add-ons from the manufacturer are present. After the first launch, you can find about a dozen pre-installed applications. Fortunately, almost all of them can be removed, except for the Palm Store (similar to Google Play) and a couple of others.

Otherwise, we have a completely clean Android 10 with minor cosmetic changes. Of the branded "chips" of the manufacturer, there are some useful things. For example, the XShare application (similar to ShareIt) allows you to share files between devices via Wi-Fi. And the Phone Master utility is able to maintain order in the system.

Fans of diversity will appreciate the ability to change themes directly in the smartphone settings. It is also possible to fine-tune the native launcher. In general, the shell is not overloaded with unnecessary junk software that cannot be gotten rid of. At first, everything works smartly and flawlessly.

the single-chip system here is far from the most pleasant even among entry-level devices. However, using the lightweight build of Android 10 Go helps the smartphone a lot in terms of speed and smoothness.

In the ITEL A48, the initial level processor SPRADTRUM SC9832 is installed. This is 4 Cortex-A53 kernels that can work at a frequency to 1.4 GHz. The graphics corresponds to the MALI-T820 video screen. According to modern realities, this, of course, is not Gamer iron even for the budget segment, but to play something simple like Clash of Clans, Subway Surfers, the "three in a row" games can be.

RAM 2 GB, which is currently you can call the necessary minimum for any smartphone if comfortable comfort when working with the device.

And in case, "RAM" will suddenly be missed, the manufacturer is provided by the "Fritzer" tool, which allows you to freeze any installed programs. It blocks background processes and frees RAM.

A smartphone is performed with a single memory layout: 2/32. As noted above, the amount of RAM is 2 GB, built-in 32 GB. Moreover, immediately after the initial configuration of the device in the internal repository, about 24, 8 GB for the needs of the user remains freely. This volume can be expanded by another 128 GB using a memory card.

And if you carry out a small cleaning, spending literally a couple of minutes and removing the pre-installed programs, it is possible to unload the storage to 26.3 GB of free space. Not thick, but this should be enough for the installation of customers social networks, games and many other services.

The smartphone has a dual main chamber, where the main module has received a resolution of 5 megapixel. About the second manufacturer does not mention, but, apparently, it is a depth sensor by 0.3 or 2 megapixel, which is used for the bokeh effect. The front sensor here is also 5 megapixel.

In the built-in camera application, you can select multiple shooting modes. Under conditions of insufficient lighting, you can include "night shooting", which should help improve the quality of the pictures. There is also the so-called "body defect" mode, smoothing wrinkles and removing other small defects from the face.

Sample photos on itel A48:

It is difficult to talk about dynamic range, white balance and other more complex things in pictures of this quality, because they simply lack detail even in the daytime. At night, especially dark areas seem to be lost from the frame.

Not night mode or built-in filters can help, but various photo editors. In this case, the camera has only basic functionality, the rest will have to be brought to a decent state manually.

In terms of autonomy, the itel A48 is doing great, despite the not very capacious 3000 mAh battery. For a “standard day” (calls, Internet surfing, social networking, a few games), it will definitely be enough.

And if suddenly this is not enough for you, there are a bunch of tools in the settings that will automatically control battery consumption and extend battery life.

For example, you can choose from two power modes, prevent running in the background any programs, disable autorun, and more. It is unexpectedly nice to see such functionality from such a device. Some useful options provided here are not available in more advanced shells either.

During battery testing, we loaded the device to the maximum. Watching a two-hour YouTube video at maximum brightness with Wi-Fi, Bluetooth, and GPS turned on consumed 40% of the battery. Accordingly, the full capacity of the battery should be enough for about 4-5 hours in a similar use case, which is already very cool for a budget device.

And in everyday work with a smaller and more standard load, the smartphone will definitely be able to work for about a day without recharging.

itel A48 is capable of working with GPS satellite navigation system, supports A-GPS technology. In addition, the device can be detected by GLONASS, and QZSS satellites, but the signal is installed only on the street and, provided that nothing bothers nothing.

In Wi-Fi networks, the smartphone can work according to the 802.11n protocol. Results in SpeedTest Not bad, the signal is not falling off even if the device is far from the source. Range of operating frequencies: 2.4 GHz.

Calling direct competitors Itel A48 is impossible. Considering the cost of the device, probably, they are not even. This is the case when each digit in the price tag is fully justified.

Less than 6 thousand rubles in the face of this model we obtain:

Without minuses, naturally, it is also not to do:

Perhaps the most tangible disadvantage of Itel A48 can only be called cameras. In general, the smartphone may be a bright and interesting gift, for example, for a schoolboy: the minuses emphasized in the review are unlikely to be tangible for the child.

Why a desktop computer is better than a laptop?

How to put a clock on the Android lock screen

What is the camera aperture and what it is needed