Now most smartphones are equipped with an IPS screen. What are the advantages of such a matrix?

For a long time, computer monitors and mobile phones have been equipped with a TFT display. It seemed that the possibilities of such a matrix were enough to view a high-quality picture. But gradually it turned out that there are other technologies to significantly increase the viewing angles, as well as to increase color reproduction. One of these technologies is IPS, which will be discussed in this article.

The structure of the IPS screen

At the time, the invention of IPS displays allowed the creators of smartphones and tablets to make a large leap as a displayed picture. For the first time, mobile devices approached this parameter to plasma TVs! Now smartphones could boast with almost maximum viewing angles, and the color rendition began to nicely rejoice. 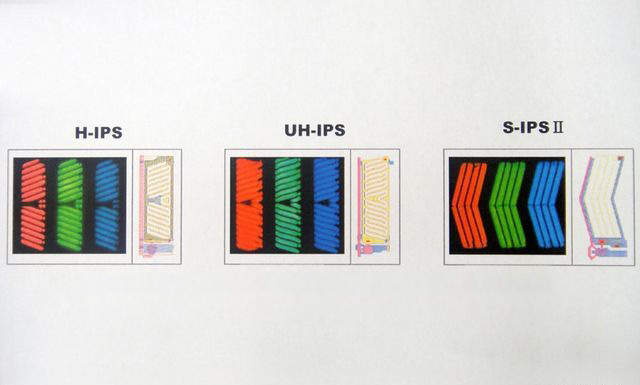 The options for the position of subpixels

The matrix performed using the IPS technology consists of each other in parallel to each other of thin-film transistors. Or liquid crystals, as they are called much more often. Another difference from the TFT-display is the fact that crystals in the absence of voltage (when the black color should be achieved) do not rotate. It is these two properties that lead to the fact that the colors are almost not distorted, no matter how the viewer did not choose the viewer. It is also clearly noticeable that the IPS screen gives a deeper black color, especially expensive variation, embedded in flagship smartphones or notable TVs. 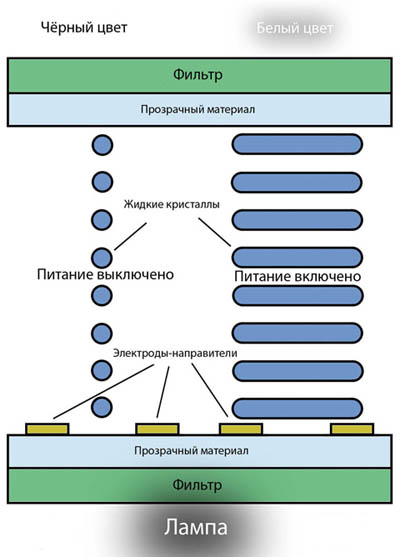 structure of each subpixel

parallel The location of pixels plays a negative role. Unfortunately, the IPS screen has for a long response time. If the developers did not apply expensive tricks, then this parameter will be approximately 5-8 ms. At the TFT matrix, this parameter usually does not exceed 2-3 ms. Of course, in ordinary life, such a difference is a person hardly notice. Feeling decent response time only in some games. This in this case is about games for PS4 and Xbox One, such problems are not felt on the smartphone at all.

Another disadvantage of technology is to high energy consumption. No matter how cool, and smartphones with an IPS display spend a charge fast enough. This is due to the fact that turning the array of the crystals along parallel to each other (it is necessary to show one or another color) is noticeably more difficult - for this requires more voltage. That is why the phones with an IPS screen are usually equipped with an either a capacious battery or an energy efficient processor.

The behavior of subpixels with different brightness

But the price is unambiguously incurred in disadvantages. Of course, the TFT matrices are still cheaper, which is still being embedded in push-button mobile phones. But the difference is no longer so great, so even the ultra-budgetary smartphones based on Android are increasingly getting an IPS display. But you need to understand that not all screens created on this technology are the same. The cheapest still have some distortion of colors when viewed from certain viewing angles. But even such matrices give a much better picture, rather than TFT products.

What display is better: IPS or AMOLED?

Of course, it is suggested now and a comparison with much more expensive screens made according to AMOLED technologies. Such matrices are created on the basis of organic LEDs. That is, their pixels are not only located in parallel to each other, thanks to which the maximum viewing angles are achieved, they are also glowing alone! In this regard, the display based on organic LEDs provides deeper black colors, and therefore the realism of the picture increases significantly.

So, AMOLED VS IPS. Who wins? Of course, a more expensive matrix. For no accident, the most advanced TVs are embedded OLED screens. The difference between the displays of two types is very easy, especially if matrices are compared, built into relatively inexpensive smartphones. Nevertheless, we must not forget that the production of compact amoled displays in normal volumes has been established only at Samsung. Of course, South Koreans sell some volume of their products to the side, but still amoled screens are rarely found in other smartphones. In this regard, you do not have to choose to buyers - if the amount on the purchase of the device is not highlighted, you will have to search for a device with an IPS screen.

IPS technology will not be forgotten for a long time. Now the screens manufactured on it have the best price and quality ratio. In no case do not buy a smartphone, equipped with a TFT display - this technology has already been outlined. Well, to think about the amoled screen only if there is a sufficiently large free amount.

OLED display: what is it?

AMOLED display: what is it?

How to hide files and folders on android?

How to improve the performance of the Android smartphone in games