iPhone 8 could become Apple's best-selling smartphone due to its low price and compact size compared to other iPhone models. Its competitor among the representatives of Android can be considered the Galaxy S8, which has been on sale for six months and may soon start to get cheaper.

Maybe Apple and Samsung smartphones, or it happened involuntarily, we will never know. In any case, this year and a significant part of 2018 iPhone 8 and Galaxy S8 will represent the world's two main mobile operating systems. It won't be easy to choose from them. Samsung brought a new design, Apple for the first time released three iPhone models at once, one of which also received a redesigned frameless screen and some exclusive features.

You are reading a translation of the review from the portal PhoneArena.com, the original article was published on October 3, 2017. 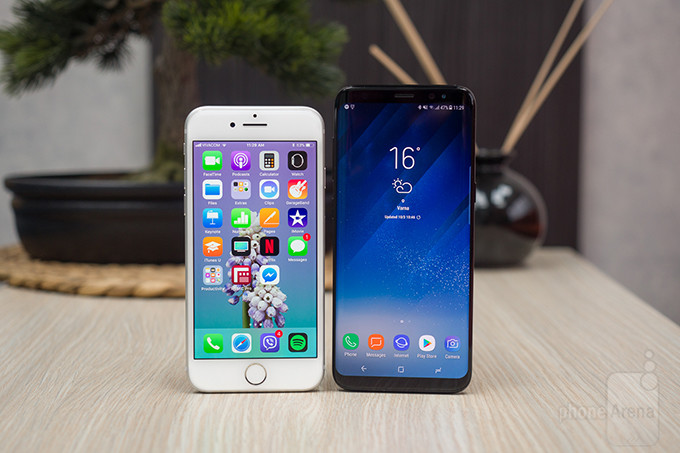 The iPhone 8 retained the design of previous generations. Instead of a complete redesign, Apple opted for a slight cosmetic lift in the form of a new glass back. Changing half of the smartphone is not a minor thing, but on the other hand, whatever Apple changes in the design of 2014, it remains outdated. This is not to say that this is bad, the appearance of the smartphone is elegant as always, and the glass on the back makes it even better.

But as soon as you pick up the Galaxy S8, you feel the attraction of a futuristic frameless design. It's not just the bezels, or lack thereof, but the practical benefits of a wider screen. This screen displays more content.

The S8 also offers a polished metal frame, and this eye-catching feature will also appear on the iPhone X but not on the iPhone 8. Instead, a matte aluminum frame is used in this unit, more slippery and not so brilliant. The iPhone 8 style remains quite limited, as if it was done deliberately. Perhaps the developers planned so that the iPhone X stands out on the background of iPhone 8. S8 is available in a larger variety of color options: black, silver, blue, gold and light pink, and the iPhone 8 is sold only in silver, black and gold colors.

If you do not pay attention to the appearance, both smartphones are the last word of mobile technologies and have premium functionality. There is protection of the body from water and dust, wireless recharging, for the first time in the iPhone lineup. 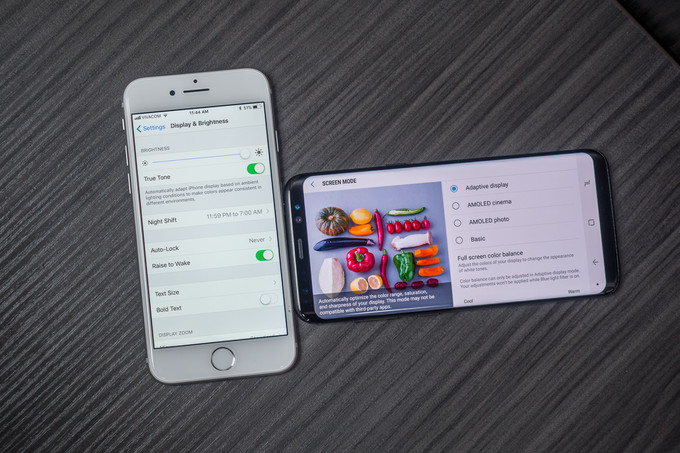 The only difference between the iPhone screen from last year's models was supporting True Tone technology. The IPS panel LCD with a diagonal of 4.7 inches and a resolution of 750 x 1334 pixels is still used. This panel provides high image quality, except that relatively low resolution can be called a weak side. As for True Tone, this is an excellent function that allows you to change the color balance of the screen so that it naturally looked against the background of the surrounding lighting. At times, this leads to the fact that the screen has an unnecessary yellowish tint.

S8 screen is much more interesting. Its diagonal is 5.8 inches, resolution of 1440 x 2960. It is a slightly larger screen of the iPhone 8, but much longer. Panel Samsung AMOLED In adaptive mode, the default varies bright live colors. Those who want to obtain more natural color can set the SRGB mode, although then the results become somewhat lifeless.

The main attractive screen feature S8 is that it occupies the front of the smartphone almost entirely. Its length and high resolution make the screen more convenient to work in the browser, where you can see most of the pages.

Thanks to the curved form and stylish rounded corners, as well as the ALWAYS ON DISPLAY functions, the Galaxy screen looks very impressive. iPhone 8 offers a worked and balanced panel, which also deserves attention. 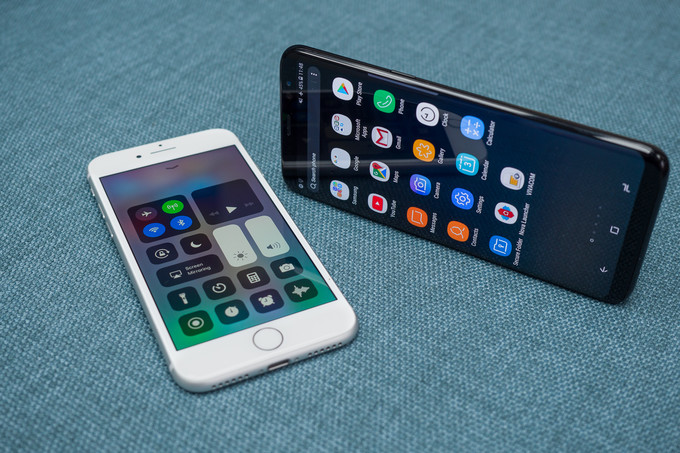 S8 was released on Android 7 and until received updates to Android 8.iPhone 8 launches immediately on the new iOS 11 system, bringing the latest features and improvements.

Samsung Experience software is installed on top of Android, which the South Korean manufacturer is actively developing and improving compared to what was previously in the TouchWiz shell. Apart from occasional performance issues, Samsung Experience is a well-designed interface with many customization options. It contains many unique features, such as the payment system Samsung Pay, secure folder and the virtual assistant Bixby.

This skin will compete with iOS 11. Apple software is extremely rich and colorful: there is a curated App Store, Apple Music streaming service, iTunes store, Health app, voice assistant Siri. There are few needs that cannot be met inside iOS and you have to use third-party applications and services. The advantage of the platform is a large selection of free Apple applications that allow you to work productively in various areas of activity, such as typing, video editing, working with sound. Another advantage of the system is the rapid receipt of major and minor updates over several years after the release of the device.

Where Apple really excels is in processing power. The iPhone 8 takes that one step further with the new 6-core Apple A11 Bionic processor. Its processing power far exceeds that of Android smartphones, which ensures a highly smooth operation.

The S8 is powered by the currently best processor for Android Snapdragon 835 and Samsung's own Exynos 8895, which is at the same level. Performance is fast and stable, only time from time to time is observed. Graphic performance could be better, judging by the testing of a number of three-dimensional games. However, the power S8 is enough for even the most intensive work.

In terms of flash memory, manufacturers have chosen different approaches. Samsung has a minimum storage value of 64 GB, which is quite a lot. Additionally, you can set the memory card microSD. iPhone 8 does not support memory cards and is offered in versions of 64 GB and 256 GB. Thus, there should be no disadvantage in the disk space.

The Apple Safari browser does not have problems when working on iPhone 8 due to its powerful processor. On Android, the situation is more confusing. S8 has two browser: Samsung Internet and Google Chrome. Both are at a high level and the option from Samsung in some parameters even exceeds Chrome. If you like Samsung Experience, you can prefer this browser. 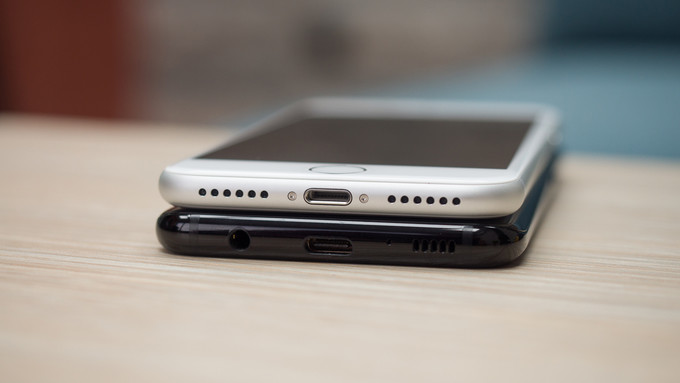 There are no problems with available communication standards for a long time on flagship smartphones. These two devices are able to squeeze the maximum of the network features LTE of your telecom operator.

Each smartphone supports Bluetooth 5 communication standard and all important standards for navigation. The main difference is the ability to use S8 as a local storage when connecting to a computer and the presence of a USB-C connectivity, while the iPhone 8 uses the Apple Lightning Connector. On Samsung smartphone There is a headphone connector 3.5 mm, no on iPhone 8.

on iPhone 8 and S8 no double cameras like on iPhone 8 Plus and Galaxy Note 8. More traditional single cameras are used, but their quality is at the highest level.

The resolution in both cases is 12 meters, but the difference in specifications exists. S8 has a larger sensor with a wider aperture. This allows you to issue a little higher-quality photos, especially with weak lighting.

The interface of the iPhone 8 camera

The interface of the Galaxy S8 chamber

S8 has a stunning camera, but the software is too trying to artificially increase the clarity and make colors warm. Reducing the volume of software processing could lead to better results. Despite this, Samsung smartphone is a leader of shooting with weak lighting.

iPhone 8 is able to record video on permissions up to 4K at a speed of 60 frames / s, S8 on the same resolution only 30 frames / s. As a result, the quality of the video on the iPhone 8 seems higher, smaller here is less journey and artifacts. But the sound when shooting video seems muffled, which is not on S8.

This section consists of two: video and audio. In terms of video, thanks to high-quality screens, both smartphones work fine. The iPhone 8 is better compatible with the standard video from YouTube, S8 is better coping with wide-angle formats like music video clips, where the aspect ratio of 2: 1 is used. Larger variants of these two smartphones allow you even more convenient to watch videos, but you will not call these screens.

In terms of sound of equal struggle failed. iPhone 8 has stereo speakers, which is a plus. They sound perfectly for the smartphone, you can even hear low frequencies. The volume and purity of sound are also high, the S8 speaker is not able to achieve such indicators. The same applies to the incoming headphone. S8 offers headphones under the brand AKG, but wearing them are not so comfortable and the sound is worse than on Earpods. On the iPhone 8 there is no classic headphone connector, but there is an adapter for it.

On both platforms, Apple Music streaming services, Google Play Music, Spotify and others are available. When moving from one platform to another, you can take a music library with you.

During telephone conversations, the ears of both smartphones are issued a normal sound, But on the iPhone 8 you can hear any clicks. The developers recognized the presence of a problem with a limited number of devices and work on a software solution. On S8, the sound quality is also impossible to be called perfect, but there are no such problems. It can be said that in many respects telephone conversations depend on the quality and load of networks of operators. 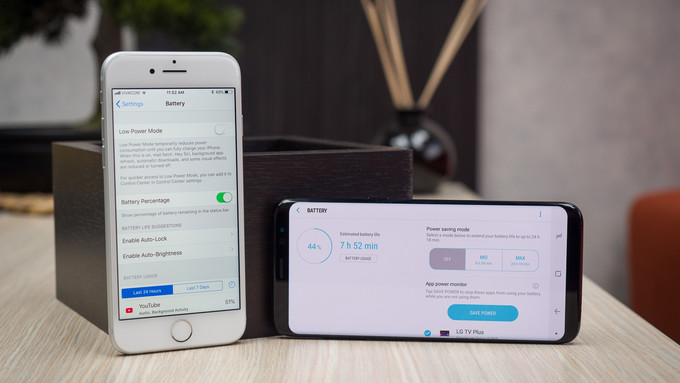 If something on smartphones still requires improvements, so it Autonomy. The current flagships are able to extract one and a half days at an average load. These two smartphones also applies. Battery capacity S8 is 3000 mAh against 1821 mAh on iPhone 8, but the duration of work is approximately equal.

In terms of recharging, Samsung smartphone has superiority. From zero to the maximum it charges in 1 hour 40 minutes. 2 hours 27 minutes from the iPhone 8. The iPhone first got a wireless recharging, on S8 it also has, but there is also a quick wireless recharging. It is later expected to appear on the iPhone after the release of the software update, but the deadlines are not called. 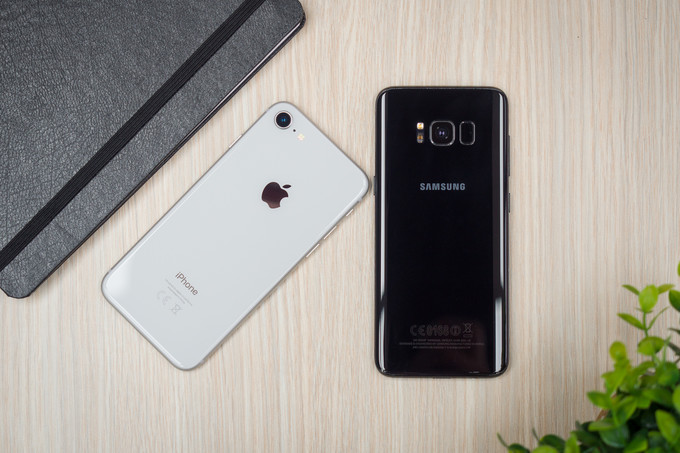 Apple and Samsung continue to remain the main competitors of the smartphone market. Apple is no longer trying to offer medium price categories, instead by betting the most advanced technologies in the most advanced design. The company has premium services in an attractive, but at the same time a conservative building.

Those who want to get a more bold solution should choose S8. Samsung has released a beamless screen, glass shell and fast wireless recharging. This year, as never before Samsung asks the direction of development of smartphones. Of course, its smartphones can not be called perfect, but the company boldly goes to experiments and risks. Sometimes risks pay off, as in the case of S8.

iPhone 8 is a good apparatus, reliable purchase in the price range of about 60000 rubles. However, reliability and inspiration are often not combined. iPhone 8 can be called an improved iPhone 6, so rejoice in the purchase of such a device is not easy. S8 has such a problem.

IPhone 8 and 8 Plus Review: Changes in small doses

How to shoot on a smartphone underwater?