Huawei Ascend D Quad U9510 was announced at the Mobile World Congress in Barcelona in 2012. According to Huawei, this smartphone is the most high-performance device at the time of presentation.

And, indeed, it turned out that the device is able to compete with the recognized leaders in the mobile market.

This review of Huawei Ascend D Quad U9510 will start with a description of the appearance. Immediately, we note that the device has a very good performance. The design of the device can hardly be called stand-out among other smartphones, but, anyway, it has its own characteristics, which become noticeable when the device falls into your hands for the first time. This is, for example, the bulge of the rear camera module.

On the front side of the smartphone is a 4.5-inch display, and below it are the gadget control buttons.

The body material is special plastic. The assembly of the device is done very well: there are no squeaks during operation and backlashes, individual parts of the case fit perfectly.

Huawei Ascend D Quad is based on a 4-core Huawei K3V2 processor with a clock frequency of 1.5 GHz. RAM in the device is 1 GB, which, together with the characteristics of the processor, makes the smartphone very fast.

These are not just words, there are also documented performance tests Ascend D Quad. 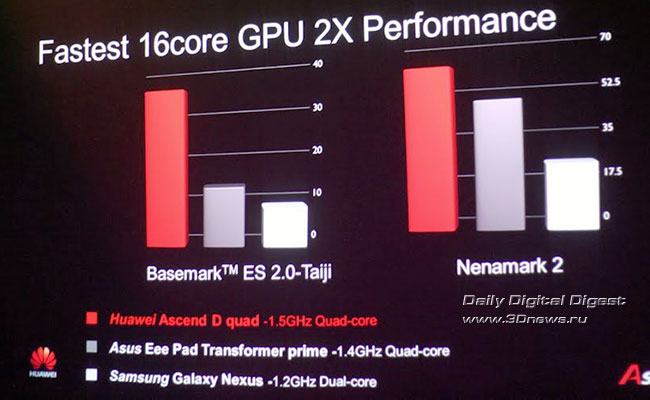 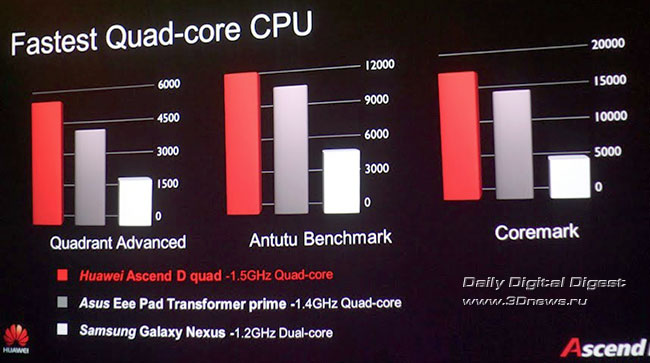 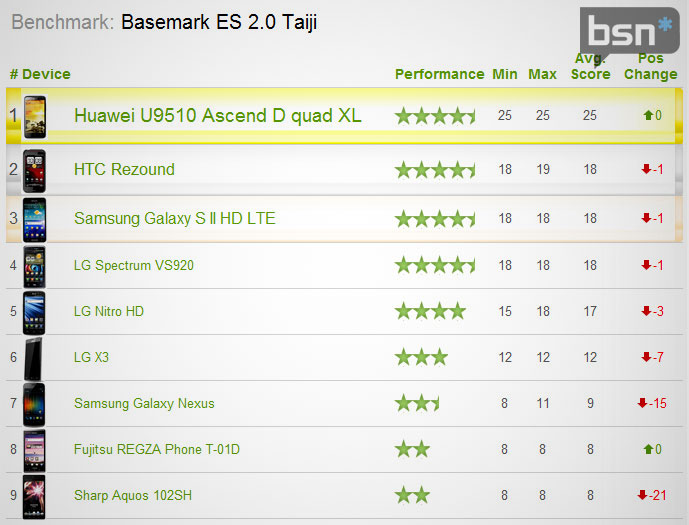 Performance tests were also performed graphics accelerator. You can see them in the photo below. 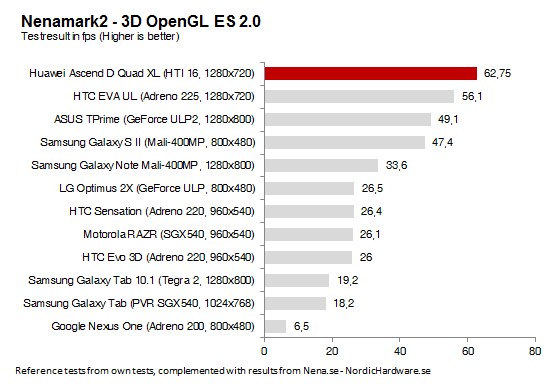 Judging by the tests, Huawei was able to create a very attractive device that can compete with the leaders market.

The permanent memory in the gadget will be 8 GB, but it can be expanded via microSD (max. up to 32 GB).

Huawei Ascend D Quad U9510 will run Android 4.0 Ice Cream Sandwich operating system, which will also have a very positive effect on the overall characteristics of the device.

Of the communication capabilities, we note the ability to work in 3G networks, support for modules Wi-Fi and Bluetooth 3.0. There are ports HDMI, microUSB. Also, the device allows you to use the navigation module GPS and FM-radio.

Your smartphone is equipped with audio and video players that support the most popular recording formats.

Huawei smartphone Ascend D Quad is equipped with a 4.5-inch capacitive touch screen with Super AMOLED. The display has a resolution of 1280x720 pixels, that is, it is a full HD screen. The pixel density is 330 ppi, the number of different shades is 16 million.

Viewing angles of the smartphone are very wide, fading in the sun is weak.

The quality of the picture on the screen makes a good impression, it is contrasting, bright, and the color reproduction is excellent.

So the device's screen will also not be inferior to competitors.

Huawei Ascend D Quad is equipped with an 8-megapixel camera with dual flash and autofocus function. The pictures are really high-quality, clear, conveying all the beauty of the captured moment.

The camera is also capable of recording Full HD video at 30 frames per second.

There is a 1.3 megapixel front camera for video calling.

The smartphone is equipped with a 1800 mAh lithium-ion battery, which is quite good compared to competing models from Samsung, LG and other manufacturers.

The price of Huawei Ascend D Quad has not yet been officially announced, but judging by the characteristics of the model, it will be around 30,000 rubles. Closer to the start of sales, which should take place in July, we will announce the updated cost of the smartphone.

What a BBK company?

The best programs for accounting for Android expenses

The best cooking apps for Android

How to overclock your monitor?