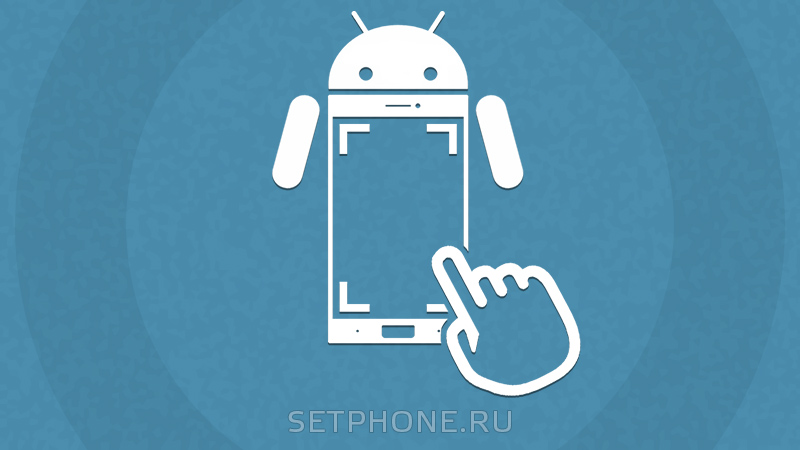 If you need to make a screenshot for Android, the operating system offers many ways to solve this task. Meet them to find out how to take a screen shot depending on the manufacturer of your device and version of the OS.

Modern smartphones running the Android operating system have the minimum number of physical keys on the housing. In particular, you will not find the PrintScreen button that fixes what is happening on the screen as a separate image is implemented on a PC or laptop. If you are interested in how to make a screenshot on android, meet our article. In it, we will analyze all the popular ways to solve this task.

When can it be needed?

The screenshot may be required to the user at any time. For example, it is necessary if you encountered in one of the applications with some problems. After making the screen capture, you can send an image to the developer to make sure that the Bug is presented and removed it in the nearest update.

Screenshots allow you to fix your gaming achievements, which is very important for some gamers. With their help, you can share a fragment of an article or a frame from the film, as well as to show where the required section is in the settings. These are just a few examples of the use of screen images: in fact, they are much more, it all depends on the imagination and needs of the owner of the gadget.

Unfortunately, the most first versions of the Android operating system did not have the integrated possibility of creating screen shots. This function turned out to be sewn in only with the release of Android 2.4. If your smartphone operates running the older version of the OS, then first you need to get a superuser's rights (so-called root rights ), after which you download one of the following applications:

The last of them allegedly works even without root rights. But practice shows that without them the screenshot on the phone is preserved at best times.

Modern versions of the operating system

If your smartphone is less than five to seven years, then with a large share of probability it is equipped with a sufficiently fresh version of the operating system. In this case, you can take a snapshot of the screen on Android easier ways, without using special software.

Buttons on the smartphone housing

On modern smartphones, the screen snapshot is created after simultaneously pressing the power key and the volume button. This is how you can make a screenshot on mobile devices issued Motorola , LG , Sony , Lenovo , Meizu, Xiaomi , HTC and many other companies.

Through a section with recent applications

on Android 11 there was a new way to make a screenshot - through the menu with recent applications. To do this, go to the appropriate section, find the application window, the screen snapshot of which you need and press the "Screenshot" button below. The snapshot icon will immediately appear at the bottom of the screen. You can edit it or send to another person.

via the special features menu

, it is possible to make a screenshot through the special features menu, but for This will first need to be included. Instructions:

Step 3. in front of the string "Quick start of the function" Menu Specialties "" Slide Runner to the right to activate the option.

Step 4. Now open the application whose screenshot wish to do and swipe with two fingers from the bottom of the screen up. Special features menu opens. Click on the right arrow.

Step 5. On the page that appears, click on the button "Screenshot". A screenshot will be taken.

On smartphones with unofficial firmware

If your device has unofficial firmware, then try pressing the off button. It is likely that in the displayed menu you will find the item "Screenshot". 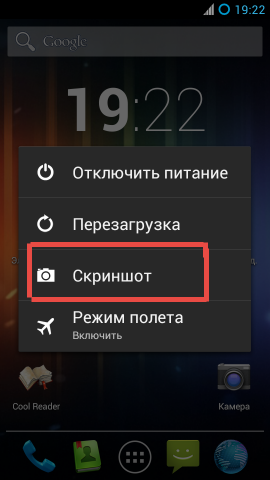 Pressing the button immediately saves the corresponding image. Of course, the menu itself will not be on it.

Screenshot using "Power" + "Volume down" buttons is possible if you use smartphone Samsung without a physical home button.

If your smartphone Samsung has a button "Home" at the bottom, then to create screenshot, you must simultaneously press it and the power key. 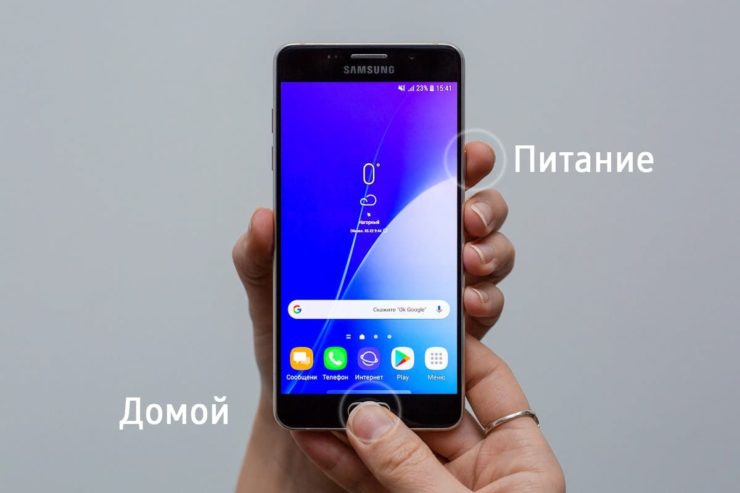 The latest devices from the Samsung Galaxy series have an additional way to take a screenshot. It consists in holding the edge of the palm from the right edge of the screen to the left, or vice versa. But support for the corresponding gesture must first be enabled in the settings, since its recognition can be disabled by default. 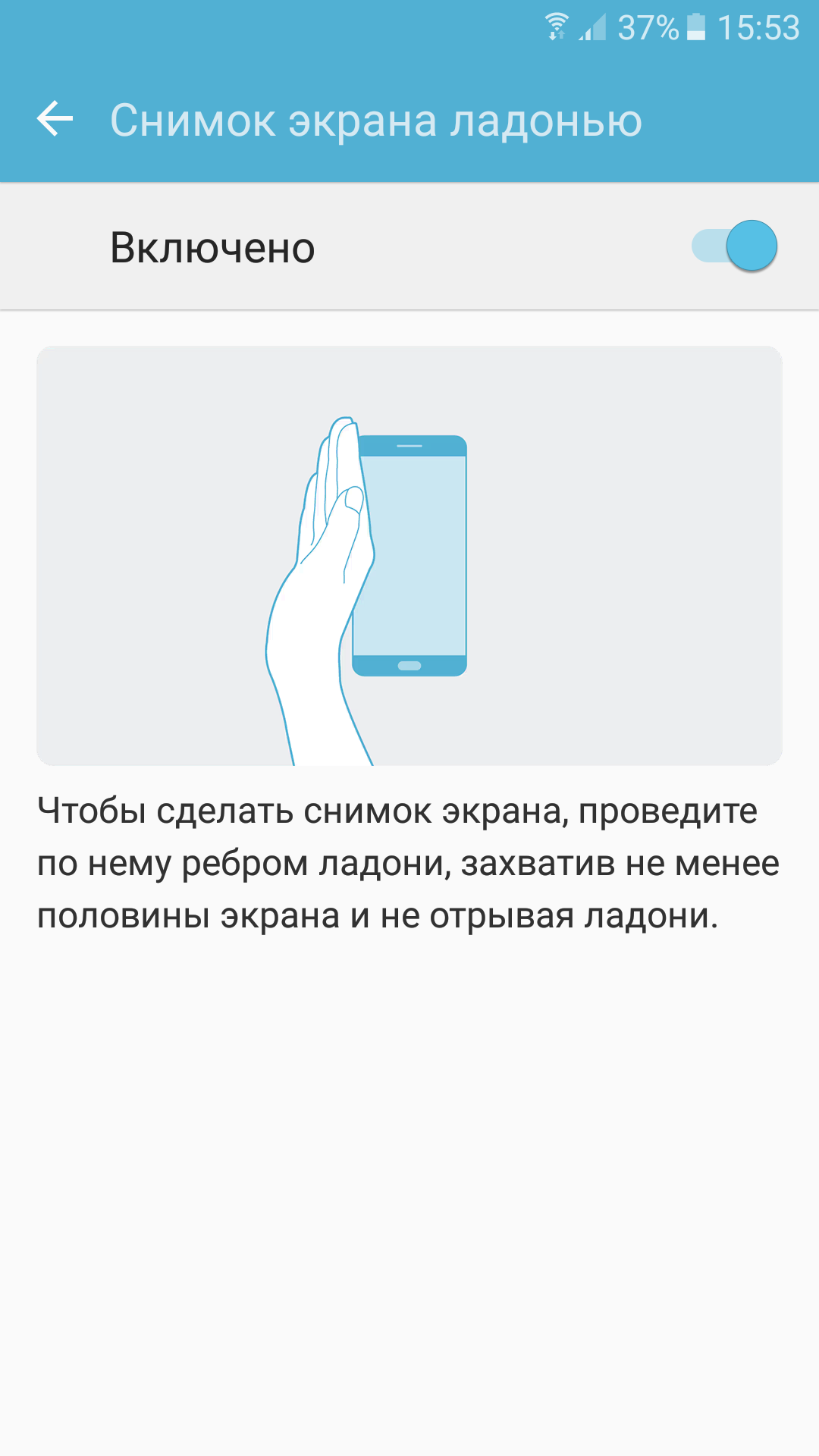 On devices Xiaomi and On some other Android smartphones, a screenshot can be taken from the notification bar. To do this, follow these steps:

Step 1 . Swipe down on the screen and pressScreenshot . After that, the smartphone will automatically take a screenshot. 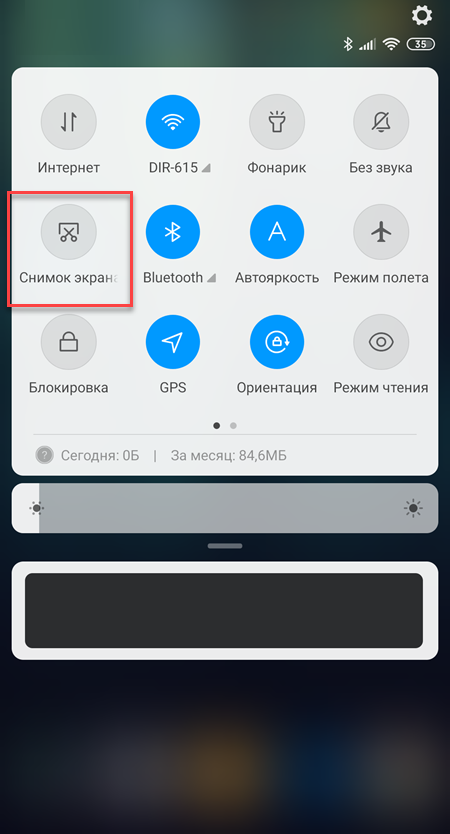 Step 2 . If there is no such button, then find the item“Sort” (may have a different name). A special menu will open through which you can add additional buttons, including"Screen Snapshot" and"Screen Recording » To capture images and video from the smartphone. To do this, simply drag the desired icons on the notifications panel and press "Ready". 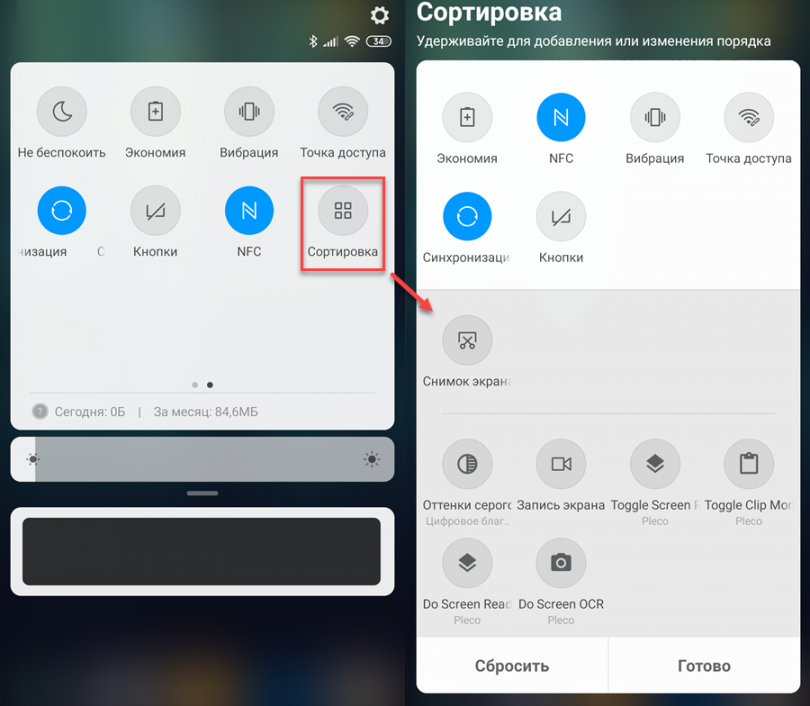 Holders of new smartphones Motorola and Lenovo with support for controlling gestures can make a screenshot with a three slightly spaced fingers to the screen. Pre-go to the Moto application, find the appropriate section and turn on the function.

If built-in capabilities Android OS For some reason you do not suit you, you can use special applications to create a screenshot. There are a large number of such utilities in the store Google Play, with the most interesting of them you can get acquainted below.

very popular (over 100 million downloads) enjoys "XRECORDER" from Inshot. This application has a wide functionality and allows not only a snapshot, but also a video recording of the screen. You can get a screenshot via the notification panel or through the buttons located on top of applications, if you provide "XRECORDER" appropriate permission during installation.

Also using the program, you can add any marks on the screen and only then make it a snapshot or edit the ready image. You can work with snapshots through the application interface.

This application is not inferior to the functionality of the previous one. Among its features - a snapshot and a video of what is happening on the screen, as well as many tools for working with video.

As in the previous case, the screenshot of the screen is created through the notification panel or through the floating button on the screen. Working with ready-made images is conducted via the application interface.

If you do not need video recording, pay attention to this application. After providing all the necessary permissions to create a screenshot, you will need only click on the button on the screen.

Ready screenshot You can edit, add additional text or make other changes.

We dismantled in our article as Easy and convenient to make a screenshot on a smartphone running Android. The operating system itself provides ample opportunities for solving this task, but besides this, you can use special applications from Google Play. Share in the comments in what ways you use, and if you know others, tell us about them, and we will include them in this material. And if you want to know where the screenshots are preserved on android, you can read this in a separate article.

How to make a singing photo on android

How to backup whatsapp on android

How to Fix App Departures on Android

Where in the phone on Android is stored

The best action cameras from Aliexpress

How to reset settings on Windows Phone?