Usually in six months of use, the owner of the iPhone starts with nostalgia to remember how quickly the gadget was immediately after purchase. The set of measures described in the article will help to return the "apple" smartphone to the former speed.

It does not matter how the iPhone owns the user - "seventh" or outdated "fourth"; Sooner or later, any mobile device begins to hob and "slow down". As a rule, this is due to limited RAM - the user scores its data of useless applications, which then forgets to delete.

The competent audit of the information stored on the gadget will accurately will speed up the work of the iPhone. What specific measures should be taken to the user and tell this article.

There is a way to quickly get rid of Apple application cache without rebooting a mobile device. Procedure of this:

Step 1. Hold down the " POWER button until the" break the slider "(it is" Slide to Power Off").

Step 2. Release the button " POWER" and clamp for a few seconds " HOME".

Step 3. After you appear in front of the iOS main screen, release the button " HOME".

Next, make a quick check: Call the multitasking menu by clicking twice to " HOME". You will make sure that the applications are open in on the background, but if you go to one of them, you will see that it is loaded again.

Before releasing "RAM" thus cleaning, make sure that the iPhone is unlocked - otherwise the "Home" retention can only cause Siri .

Parallax and frosted glass give the iOS interface a unique beauty: the first effect provides a pseudo-three-dimensional look for icons and wallpapers, the second - the volume of all graphic elements. By sacrificing beauty, you can also speed up the iPhone. Disable graphic effects as follows: 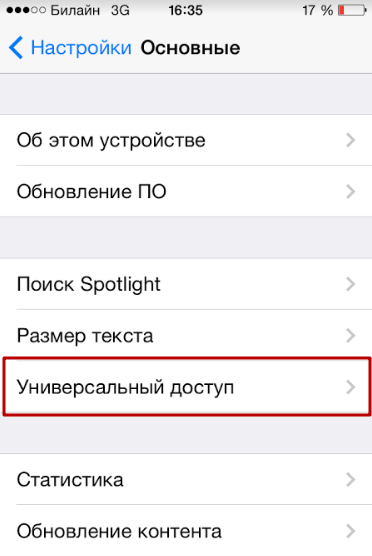 Step 2. In the section " Universal access" find the subsection " Reduce motion" and go into it. 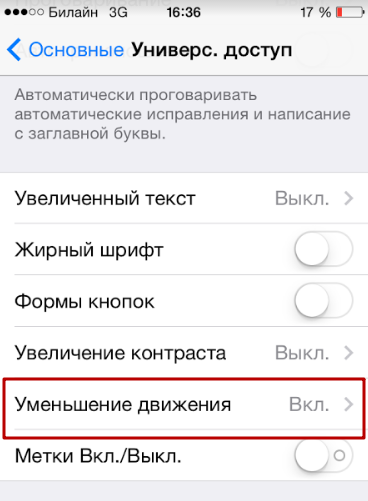 This slider is disabled by default.

By disabling graphical effects, you will notice that the response time to clicks on the screen is significantly reduced, and applications run much more smoothly.

Your iPhone may be slow because the device automatically downloads an application that is on the same user's iPad. In addition, "apple" gadgets with iOS versions higher than 7.0 are capable of downloading information from already installed applications without the knowledge of the owners, which also negatively affects the performance of the operating system.

You can prevent the iPhone from replenishing data in automatic mode as follows: 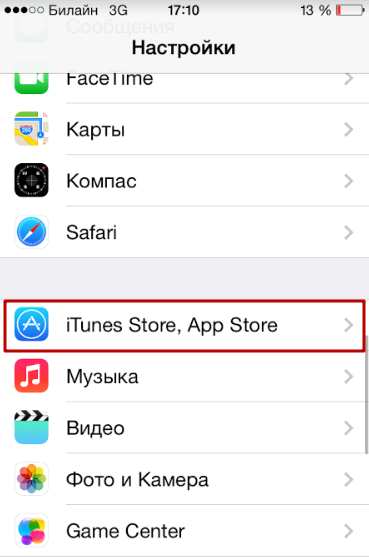 Step 2. Scroll down to the block " Automatic downloads" and deactivate all toggle switches. 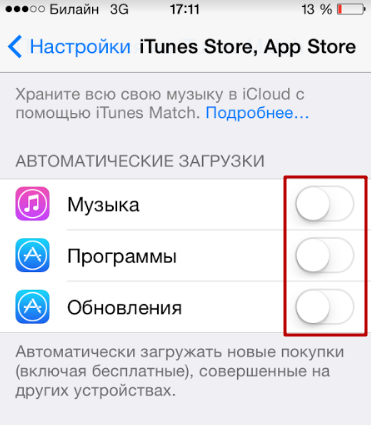 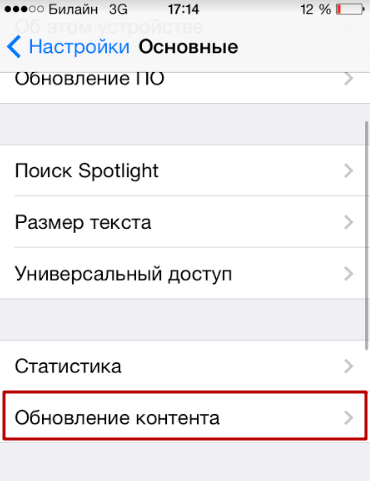 Step 4. In the subsection “ Content update ”, switch the slider of the same name to the inactive position.

By disabling autoload, the user will not only speed up the iPhone - also it will extend the battery life of the mobile device and save a lot of traffic.

This measure will not increase the speed of the "apple" device as a whole, but it will definitely affect At the speed of the built-in iPhone browser. It is possible to erase accumulated in Safari :

Step 2. Scroll down - you will find item " Clear the history." Click on it.

Step 3. In the menu that appears, confirm what you want to clean the browser history. 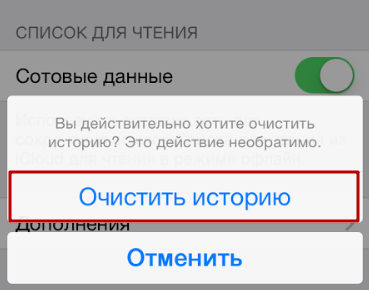 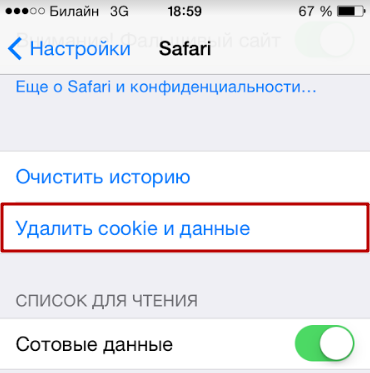 The user should be taken into account that after removal cookie the login preserved browser and passwords will disappear.

The view that the volume of the message archive does not affect the overall speed of the iPhone, erroneously - Due to the large number of SMS-ok, it hangs not only the application " messages, but also other programs. The user may surprise how many sites actually occupy its correspondence - especially if with virtual communication it regularly uses "Gifki", memes and rollers.

For useless information does not accumulate, the iPhone owners are recommended to configure automatic removal of messages after 1 month. Make it possible on iOS version above 8.0. This is how to act:

iPhone users should not be afraid to part with outdated messages. If necessary, these SMS can be restored from the backup.

Is it worth making an OS update?

Some thematic portals recommend as a measure to speed up the operating system update. Such a recommendation should be taken more than cautiously, because "there is no way back" - Apple does not allow you to roll back the "OS" to the previous version. The user must correlate the model of his "apple" gadget and the version of the OS - he should not chase software innovations, otherwise he will receive a device that, due to constant freezes, will be impossible to use normally.

“Cupertinians” do not hide the fact that each new version of the OS is “sewn in” with a bug due to which iOS slows down on older devices. This is not the most honest way Apple is forcing users to change gadgets.

iPhone 5S owners should not install iOS 10, just like 4S owners should avoid updating to iOS 8. The single-core iPhone 4 can't cope with iOS 7 either: the unfortunate owners of these old devices will not let you lie - even those few applications that are installed on the "four" constantly crash. Recommendations to update the iPhone to make it work faster are sometimes given very recklessly and superficially - “experts” always need to clarify to which version at most a specific Apple smartphone model should be updated to iOS.

It's time for iPhone users to learn how to find not only funny toys in the AppStore, but also really useful utilities. At least 2 programs are hidden in the bowels of the Apple app store that can have a beneficial effect on the overall performance of the gadget. Both perform the function of redistributing RAM (“ Memory Boost ”), that is, more megabytes are allocated for resource-intensive applications, and for less capricious ones, respectively, as much as they need.

The most effective program in terms of accelerating iPhone is Battery Doctor (you can download here ). Among the users of "apple" products, it has achieved popularity, not least due to the fact that it was recommended by a large and well-known publication Macworld in one of its articles. 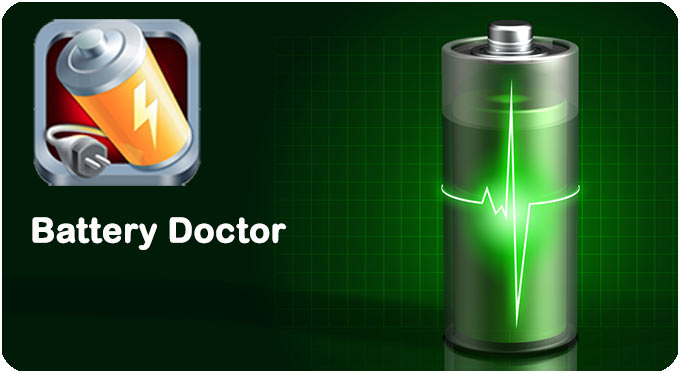 The second utility is called Battery Saver - you can download it here. This program was not recommended by international publications, and, judging by the mass of negative reviews in the AppStore, it performs its function "in so far as".

The user should not be confused that the word Battery appears in the names of both programs. The redistribution of "RAM" is rather, the secondary function of these utilities, and the main extension of the battery life of the mobile device.

Use the applications to speed up the iPhone is easier than simple: both have a section " Memory, where only one button is located -" Boost". It is enough to press this button, and the redistribution of the OS will begin.

Journalists of the mentioned publication MacWorld are advised at constant iPhone enlightenment to resort to the help of these applications First of all. If programs cannot eliminate inconvenience, contact other methods.

Users of "Apple" devices, arguing what to do if the iPhone slows down, often inflate "from the fly of an elephant." In many cases, to solve the problem, it is not necessary to resort to ingenious methods and "heavy" utilities - a sufficient device is simple to restart. The reboot will release the resources that were busy with system services, and the iPhone will definitely draw it easier.

if the reboot and other methods described were equally unsuccessful, it should be necessary to go to the extreme measure - to restore the iPhone from the backup, which was made yet to the emergence of problems with speed. Of course, this measure will lift a part of the actual data, but the problem will certainly be solved.

How to speed up your Android smartphone or tablet

How to Connect iPhone or iPad to TV?

How to restore iPhone from backup?

How to turn off Talkback on Android?

The best apps for mushroom pickers

What is MP4 format and how to open the MP4 file?