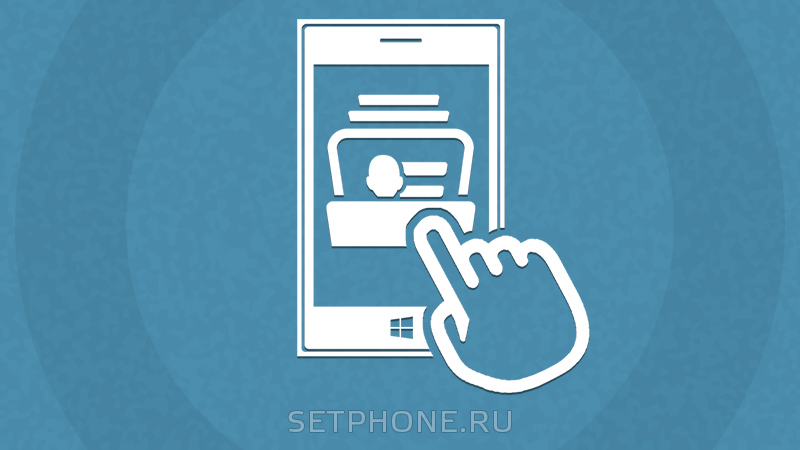 When buying a new smartphone, the user, of course, wants to save all the numbers from the old apparatus. The principle of working with contacts is different on various operating systems, and in this article we will look at how to copy data from the phone running Windows Phone or transfer them to it, depending on the situation.

Contacts on the SIM card

Export numbers on the SIM card smartphone on Windows 10 Mobile, alas, can not, but save them into the memory of the device with SIM cards easy. To do this, you need to start the Appendix People, go to " Parameters", select the option " Import from the SIM card" and specify which card and which account will be copied to which account. 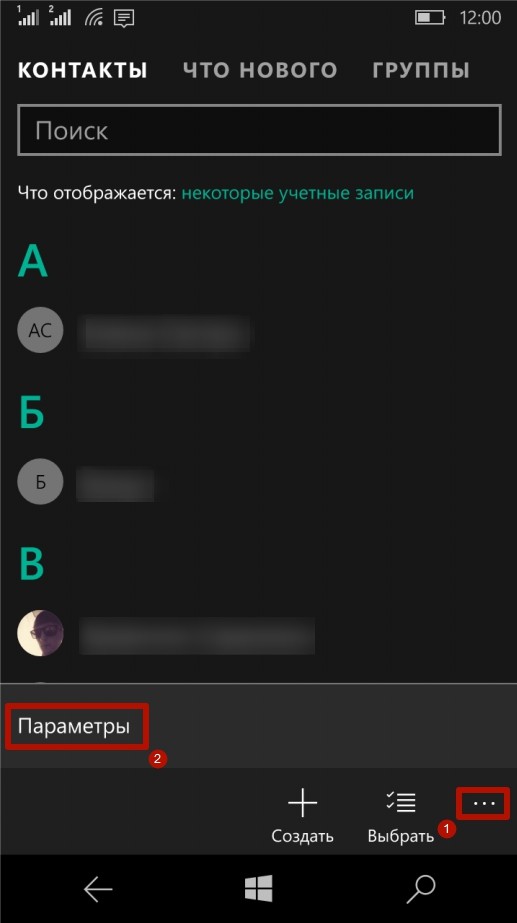 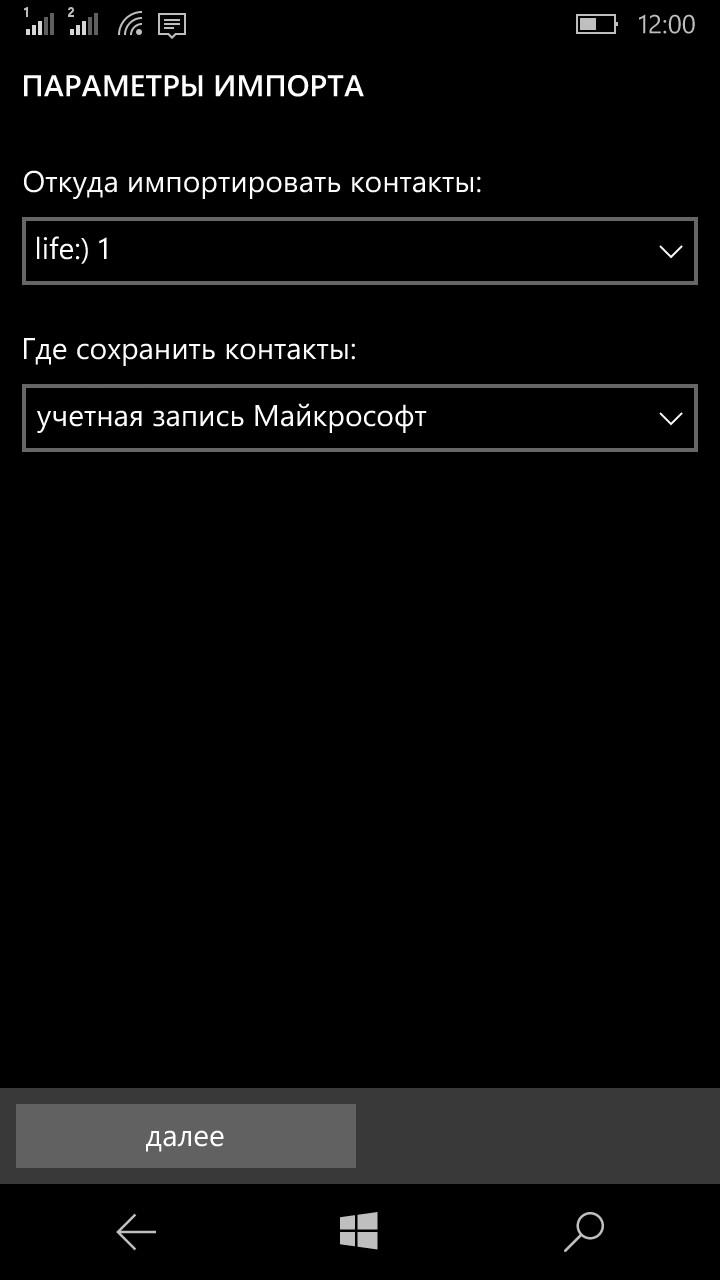 in mobile devices running on Windows, user data is stored in "cloud" services Microsoft. Therefore, transfer contacts with Windows Phone to another smartphone from the same OS is very simple - just enter the user account on the second phone and install the Internet connection: phonebook numbers and contacts from Skype will be moved to the new machine automatically.

You can also use the services of Outlook service to export contacts from Windows Phone. The sequence of actions is as follows:

Step 1. Go to Official site Outlook, Log in in Account of the user and choose the category " People" 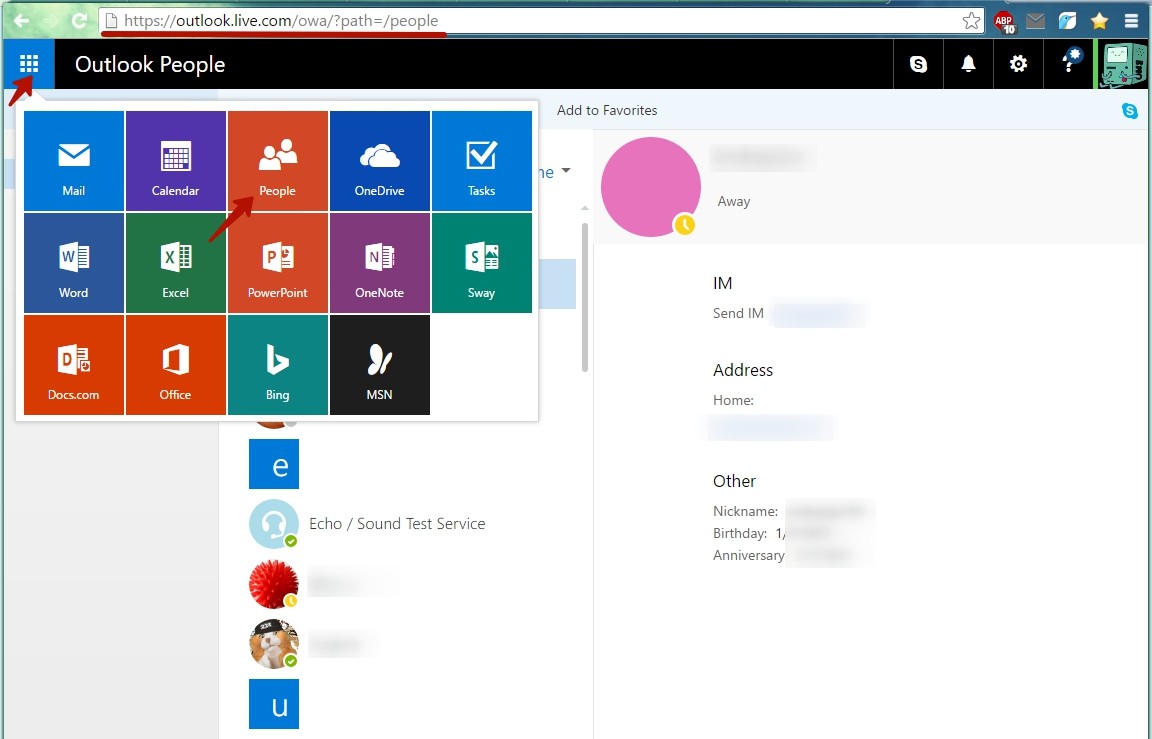 Step 2. Press the " manage button" and select " Export Contacts in the drop-down menu

Step 3. Choose which contacts must be copied, and press the " Export button. The address book will be saved in *.csv format

Step 4. Copy the file with the contacts to the smartphone and open. Rooms will be saved in the phone's memory.

After executing the export operation, you can go to the Outlook website, enter the user account, which wants to import contacts, press the " manage button, in the drop-down menu item" Import Contacts, "Specify the import format" Outlook 2010, 2013, OR 2016"and set the path to the file where the data is stored, then press the button" Upload. The next time you connect the smartphone with the same user account, synchronization numbers will occur.

To save contacts on Windows Phone with Android devices and on the contrary, three ways can be used:

Throw contacts using the Bluetooth interface, cloud services, social networks or text messages. To do this, you need to run the Appendix People, go to the right contact, click the " button to share the contact" and select the appropriate option. The disadvantage of this method is the impossibility of sending several contacts at once, so you have to allocate and transmit each number separately. 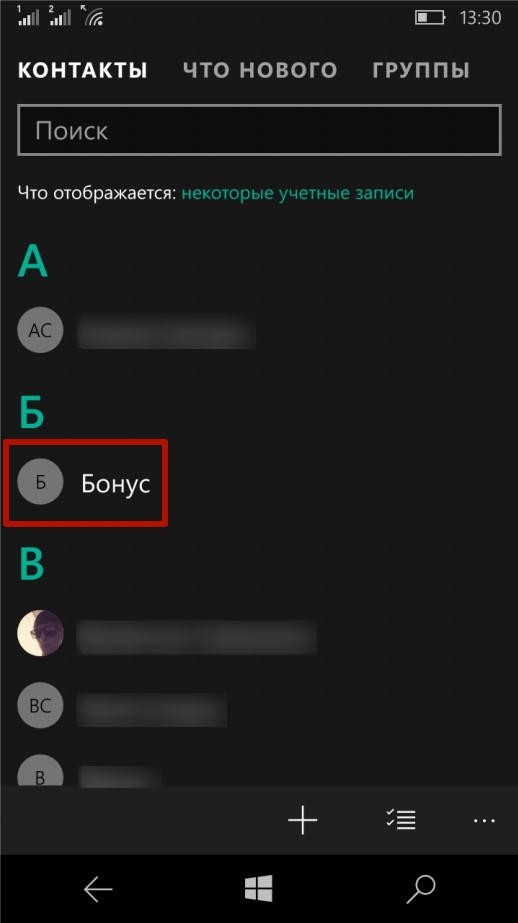 Solve the problem will help any computer running Windows. It is enough to perform a few simple actions (consider the example of CSV conversion in VCF):

Step1. Go to C: Users * Name of the user account * Contacts (instead of C: There may be any other partition of the hard disk on which the operating system is installed) and press the " interpretation button"

Step 2. Select the format in which the file with the contacts is saved and press the " button"

Step 3. Press the " Overview button", specify the path to the desired file and press the button " Next" 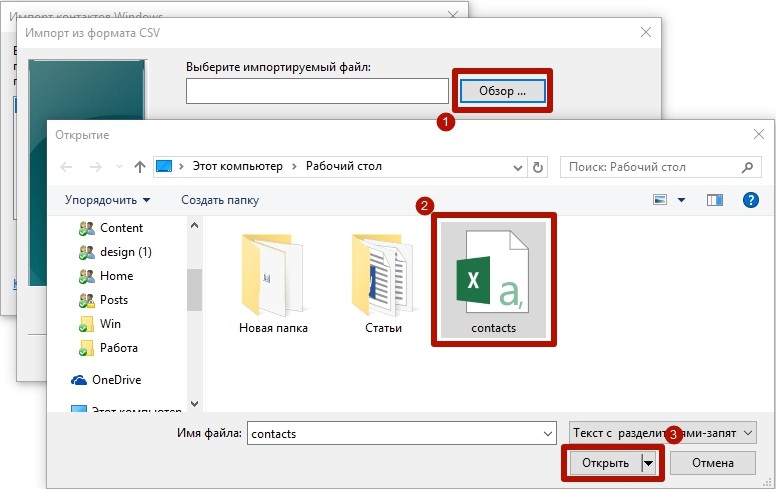 Step 4. Install the ticks opposite the necessary parameters (name, surname, street, city, phone, and so on) and press the button " is ready." All contacts will be removed from the file and moved to the Contacts folder.

Step 5. In the same window, press the " export button", select the format in which the file will be saved and press the button " export" 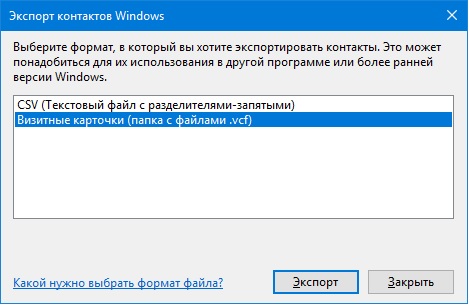 Step 6. Specify the path to the folder to which the numbers will be saved and press the " OK button. Contacts will be exported to the desired format

Step 7. Copy files into a smartphone and open. After that, the numbers will be saved in the address book of the phone

in the same way the conversion from VCF in CSV. It is worth considering that sometimes saving data in another format is not entirely correct, and in such cases the user will have to manually rule the contacts.

Move contacts between Outlook and Gmail accounts. To do this, after saving the data in the Outlook service, to go to the site, where the user contacts are stored in Google account, press the " button to import" and select the option " Import from the file CSV or VCARD, "after which you specify the path to the data file. There will be imported numbers, and with the following synchronization on the Android smartphone, all transferred contacts will appear.

How to transfer contacts from android on android?

How to save contacts in Google?

How to connect Windows Phone to a computer?

4 reasons why you no longer need a laptop

Checked: Smartphones with the fastest charging

High technologies for comfortable travel: gadgets and not only