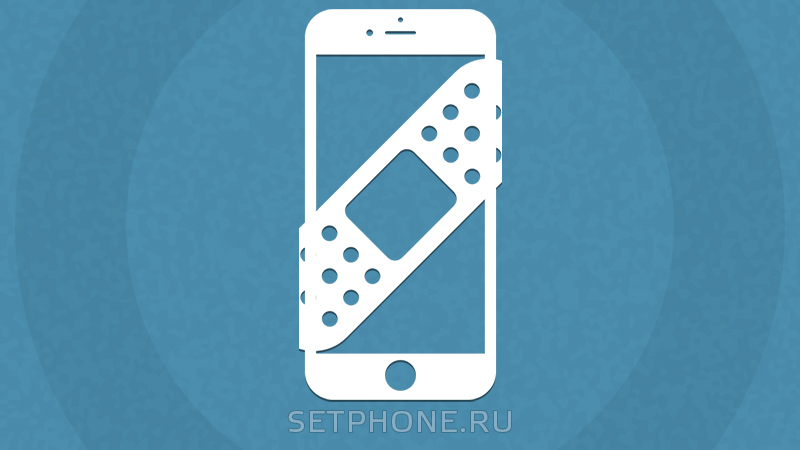 iPhone marked " as a new" began to appear in the catalogs of known online stores (like "connected" and " Yulmart") more and more often, causing potential buyers the question: what does this status mean? The mark " as a new one says it is not at all that the iPhone applies to the category" used "and was put on the user who needed money for a scentual, and that the device was initially defective, but Apple has eliminated existing shortcomings and now the gadget works "to the glory". English Such smartphones are called " refurbished.

In order to buy a recovered iPhone, there is nothing terrible - they break no more often than ordinary iPhones. However, the very fact of the repair of repairs should be the key to the reduced price of such a gadget - the buyer has the right to a solid discount. The problem lies in the fact that the sellers are sometimes not ready to put up with the loss of part of the profits, and therefore they simply do not tell buyers that the iPhone is restored. Checking the buyer himself - fortunately, he has several effective ways to do it.

If you purchase a "apple" smartphone in the box, then distinguish the recovered iPhone from the new simplest simple: on the box in which the restored gadget is packaged, there is a special printing with the inscription " Apple Certified refurbished"or" Apple Certified Pre-Owned". 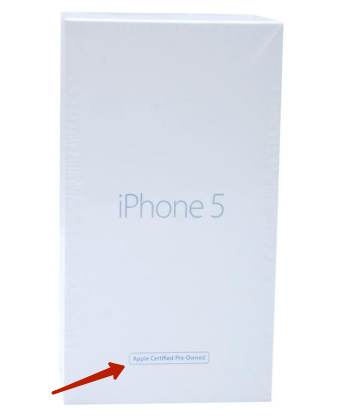 Pay attention to the other point: the box refurbished iPhone is completely white, whereas on the front face of the packing of ordinary iPhone 5 is present Image of a gadget.

Finally, another feature can be found on the rolled carrier of the box, on the sticker with the serial number and IMEI. Next to the name of the restored product should be a tag of RFB (as in the figure).

Mark " Apple Certified"confirms that the gadget was repaired and was tested at the official production of the company by qualified specialists.

Another mark is also found - " refurbished by Seller", that is, restored by the seller. To buy such smartphones no expert will not recommend - the risk is too great that the repair was made by an amateur, as they say, "on the knee."

It is very easy to calculate the restored device by the model number - in the figure above this number is before reducing RFB. In the absence of a box, you can find out the model number through the gadget settings (" settings path -" main"-" on for this Device"). 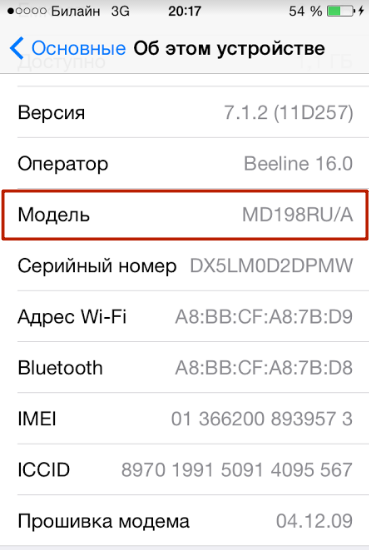 If the model number begins with LITERA M, it means that a new gadget, intended for retail implementation, if the first literature numbers - F, before you refurbished iPhone.

There are models that start with P, but these are only assigned to gadgets manufactured by individual orders. The last two characters in front of the slash in the model number indicate the country of implementation - in our example there is an RU, therefore, the phone is designed for sale in Russia (and should be). If instead of RU stands, for example, LL (mark for the USA), the buyer should take to the product with distrust and clarify the seller, as such a situation has developed.

Serial numbers on the package and in " settings" refurbished iPhone are often different.

For devices released before iPhone 5, this rule is relevant: If the serial number begins with 5, then the iPhone is restored. Earlier, serial numbers consisted of 11 characters and always started with the figures, which issued the former gadgets in the repair. Subsequent numbers of the number allowed to judge, in which month and the year an iPhone was produced.

Now serial numbers include 12 characters and can begin with the letters (as in our example). The rule of the first symbol is currently irrelevant, and check the content of the serial number, whether the iPhone is restored, will not work.

Is it possible to distinguish the restored iPhone from the new IMEI?

There are two services that allow you to find out information about iPhone by IMEI - www.iphoneimei.info (Russian portal) and www.imeidata.net (overseas service). None nor another give a unambiguous answer if the iPhone "as new", however, according to the information received, the user will be able to draw conclusions.

Go to the site and enter the IMEI gadget to a single window, then press the silver button with the arrow.

After the minute expectation, such information will be available:

on this The following conclusions can be drawn:

The informativeness of the program iPhone IMEI was greatly reduced lately - before you could learn, for example, the date of activation of the gadget, which is also allowed to judge the novelty of the device. However, there are quite enough attributes to quite accurately calculate the refurbished iPhone by IMEI.

The principle of operation of foreign service is the same: First you need to enter IMEI, then click confirm that you are "not a robot", and the final action click " Check".

The result will be:

it seems that data More than the previous service provided, but this is a delusion - in fact, there are fewer them: almost all useful data has to receive by additional checks (" Free Check NOW ). For them need registration.

Both services allow you to once perform a free check " BlackList" - that is, to clarify whether the gadget is lost or stolen.

True, strongly believing the data obtained in this way, it is not worthwhile - the test is carried out mainly among Western mobile operators.

When buying an iPhone at a large retailer, the check for the restoration does not make sense - the fact that the iPhone "as a new" is written on price tag. Also, this information appears in the product cards of well-known online stores: 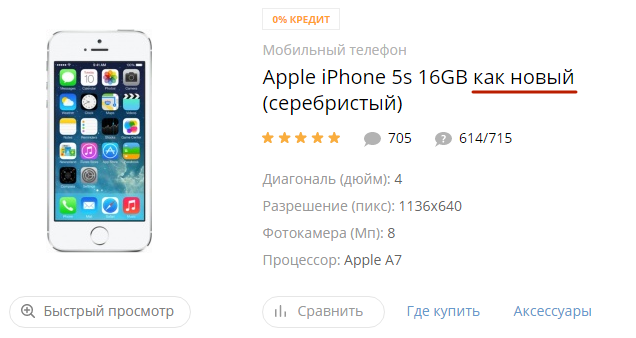 So far Refurbished iPhone are not particularly popular among domestic consumers, and there are two reasons for this: firstly, many of the consumers do not have an exact idea of ​​what lies behind the term Refurbished, and continue to clumsily classify gadgets into new and used, secondly, the discount given by retailers is already very insignificant - for example, in “ Svyaznoy ”, the buyer of a “refurbished” iPhone will save only 2-3 thousand rubles.

At official dealers, even “like new” iPhones have a “biting” price - this makes consumers contact dubious “dealers”. With such cooperation, it is important to follow the advice given in this article and pay attention to checking the smartphone for originality - how to carry out such a check is described here.

How to find out the version of Android?

How to find out how much memory remains on the iPhone?

How to download a movie on iPhone or ipad?

5 actions that will make you victim of the extortionist virus

Why the phone is heated on android?

The best apps for video conferencing

The best manufacturers of cameras