Recently, it was announced (in February 2012) and already appeared on the counters of Russian stores New Smartphone Highscreen yummy Duo. A distinctive feature of this device is that it supports the operation of two SIM cards.

Highscreen yummy Duo is made as a classic plastic rectangular monoblock. On the front side of the device there is a touchscreen display, a VGA camera for video communication, distance and illumination sensors, speaker, and under the screen - 4 touch control buttons. Sound and lock control keys are located on the sides of the smartphone. On the back of the chamber and flash, logo and speaker are on the back.

The assembly was carried out very well: there are no screens when working and the backlash.

The smartphone is built on the basis of the 1-nuclear processor MediaTek MT6573 with a clock frequency of 650 MHz, which is quite a bit in modern standards. The device also provides 512 MB of RAM and as much built-in flash memory, the volume of which can be extended using memory cards microSD to 32 GB. The device provides a graphical accelerator PowerVR SGX 531.

In general, the characteristics are not the most outstanding, but with proper use they can provide a good performance.

Highscreen Yummy Duo is running the operating system Android 2.3.5 Gingerbread, which copes well with the tasks set. On the smartphone there are several preset applications: Audio player, video player, CARHOME application for motorists, there is an e-mail client and an HTML browser.

When viewing images, the screen looks pretty bright with Cold Tone Care. The viewing angles are not very large, also noticeably strong outflow of the display in the sun.

In Highscreen Yummy Duo, a 5 megapixel camera is installed, but can be removed with interpolation to 8 megapixels. There is a LED flash and autofocus feature. Photos taken with this camera are obtained by average quality, the most successful pictures come out when shooting close items.

The camera also allows you to record video with a frequency of 25 frames per second and resolution of 720x480 pixels.

There is a frontal 0.3-megapixel camera for video link. 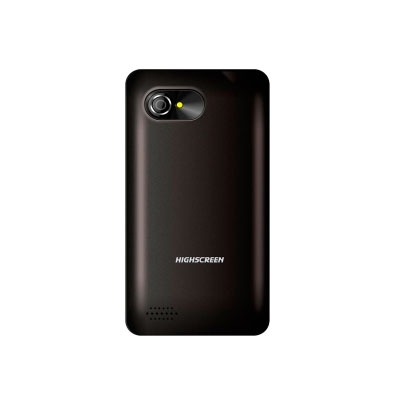 in the smartphone installed Li-ion battery With a capacity of 1500 mAh, which, according to the instructions, should be enough for 5 hours of using a call mode or 200 hours in standby mode. On average, with non-intensive use of the "battery" we were enough for a day. When playing video (the maximum screen brightness and wireless communication modules were included), the battery charge was enough for 3 hours 43 minutes.

The price for Highscreen Yummy Duo is approximately 9,000 rubles, so the device relates rather to budget models.

The best cameras with effects for Android

The best gifts for February 23