Practical design solutions and attractive prices are the visiting card of the Russian manufacturer of smart gadgets GEOZON. The guest of today's review was the Wave wireless headset - an elegant and presentable representative of their proprietary G-Sound line.

A young Russian company GEOZON specializes in the production of TWS headsets, smartwatches and fitness bracelets. Being a relatively new player in the field of mobile peripherals, it is rapidly gaining popularity thanks to a well-formulated pricing policy and correctly set priorities in the development of inexpensive gadgets - after all, the budget option most often implies some kind of compromise.

In the previous review, I talked about the strengths and weaknesses of the GEOZON G-Beat wireless headset. Ergonomics, reliability, communication stability and a good microphone were among its advantages, while the low sound quality and excessive sensitivity of the sensors, on the contrary, moderated the overall impression to a “strong average”. Today we will continue to study the G-Sound line, but on the example of in-ear headphones GEOZON Wave. 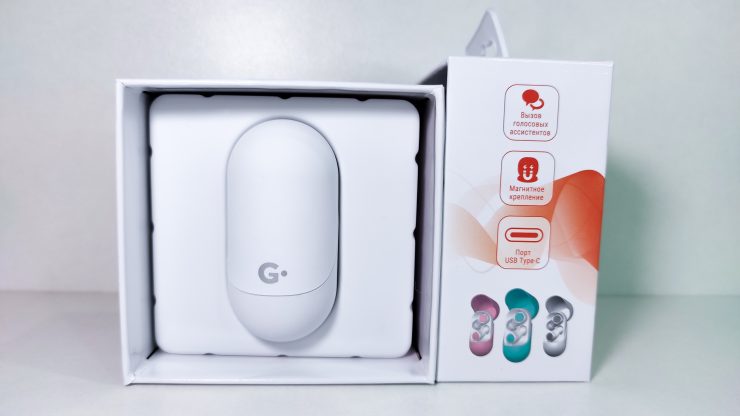 G-Sound Wave is placed inside the box with removable top cover. The front side shows headphones in black, but there are actually four options: black, white, coniferous green and pale pink, as evidenced by the corresponding marker on the side. I got a white copy.

On a plastic stand inside, I found a small charger with the GEOZON logo, similar in size and shape to capsules, which usually hide surprises inside Chinese chocolate eggs. On the front side there is a silver company logo, and on the back there is a Type-C connector. 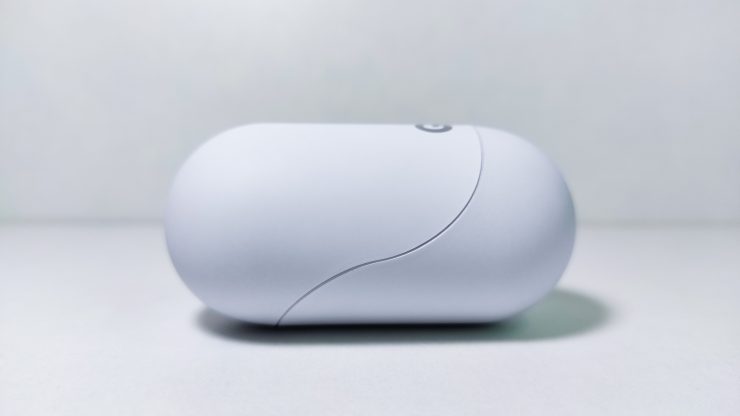 The body of the charger is covered with Soft-touch coating - rubber-like matte plastic, non-slip and pleasant to the touch. The coating increases the strength of the device, hygienic and has high resistance to abrasive loads. It is worth noting that the design of the G-SOUND series changes from the model to the model, but they are all created with a light-up to the SCI-FI minimalism.

The stand is stored a mini-booklet with all products of GEOZON, a form with warranty conditions and guide on the use of the headset. There are also placed wiring for charging and a bag with interchangeable ambush. By default, on the headset of the mid-size nozzle, and the kit go large and small analogues.

The headset is removed into the charging case with a self-closing lid. Thanks to enough chain magnets and design features, the chance of involuntary opening is extremely low. Since it unlocks capsule up and forth, Geozon engineers thought out the flexible silicone tongue as a limiter. Headphones are easily falling into the connectors allotted them and cling to the walls of the case with all the same magnets.

The "plugs" themselves resemble small barrels, which, on the one hand, are issued ahead with ambursors, and on the other end the gray rubberized insert. Lining from the same material, but already in the form of disks, is on the outer sides of the headphones.

As it turned out, a rubber "heel" from the opposite side serves as a device retainer in the ear sink, as it were, a miniature strut. This is a controversial solution that will not like anything, but personally on me Wave sat perfectly. The pressure turned out to be unobtrusive, but the fixation is monolithic, which is very important if you go to them on the jog or find yourself in the crowd flooding. 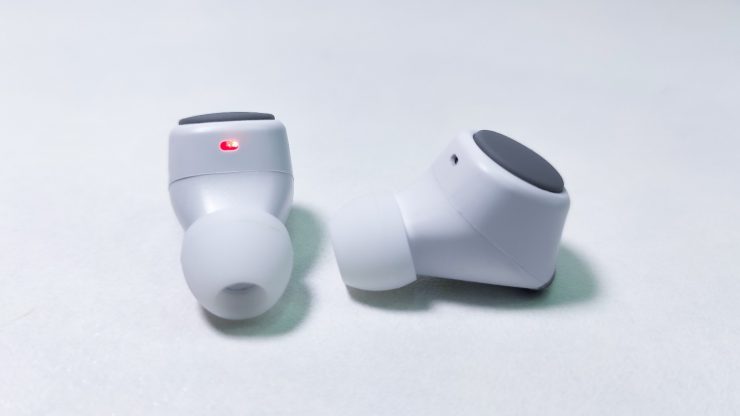 Headphones are automatically connected to each other when the charge is first removed from the charger Case. Each of them is equipped with a LED indicator. If one of them alternately flashes red and white, and the other is only white, then the connection has passed successfully. In addition, they will fill a melodious beep. Going to charging, each headphone will burn red until the energy fulfill their tiny batteries.

The headset also turns on immediately after the extraction, otherwise it will be for a few seconds to clamp one of the multifunction keys - to my amazement, instead of the touch panels, there are buttons hidden under the rubber membranes on the front side. Headphones are turned off in the same way.

The case is on the small - pairing via Bluetooth through the appropriate function in the smartphone. There were no problems with the search for the device, and I could not have noticed without pleasure that the connection, as in the case of the previous model, is extremely stable even at a distance of several meters from the phone and does not fall throughout the entire working cycle.

Control is carried out by sequential clicks on any of the buttons. One thing - stops or continues to play, allows you to answer the call and complete the call. Two pressings include the next track from the track, and three - request the voice assistant of your operating system.

The lack lies in the fact that the headset does not have the left and right side, which means there is no possibility, for example, manipulate the volume of the incoming signal or switch to the previous composition. On the other hand, you do not risk once again run Siri or lose touch with the interlocutor while trying to fix the earphone.

From the side, the gadget looks very good: the obsessive white sticks are not sticking out, which strive to cling to clothes, there is no bulky body that turns users into robots from Soviet fiction. Everything is very modest and neat. It is a pity that the pretty geozon logo on the side is missing.

The headset feeds from the case, and in turn absorbs Energy through a charging port with a wire connected to it USB Type-C. To fill the box, it is enough to connect the cord to a PC or to any "fork", whose parameters do not exceed 5V, 2A.

I can't say with accuracy how long it takes to fully charge the device, but I certainly know that without further feeding the headset withstands more than three hours of active work, and Case keeps more about 12 hours in the battery And very quickly recharging the headphones placed inside - this is more than enough for a whole day spent outside the house.

Well, finally, the main thing is the sound. And in this regard, the baby GEOZON WAVE was pleasantly surprised. No, it does not knock on the cranial box with bulk bass and does not have a spatial sound, but confidently broadcasts musical compositions, coping with the entire frequency spectrum.

I used several tracks from Spotify different genres, twisted Equalizer in terms of the situation and as a whole remained very pleased with the result. For intra-channel headphones Geozon Wave demonstrates very good quality broadcast.

Returning to the conversation about compromises, in the weaknesses of the headset, you can write a mediocre microphone. The interlocutor is heard perfectly, but he perceives my voice so, for sure I am on some removal from the intercom. Moreover, even if you take out the earphone and speak directly into it, the sound will still be too confident and somehow flat.

Geozon Wave is a wonderful representative of the G-SOUND lineup. The headset looks great, it sits comfortably, easily controlled, reliably cling to the phone and adequately holds a charge for several hours of active work.

In contrast to the weak microphone there are very good dynamics, cope with musical compositions of any directions. In addition, the "plugs" provide additional noise insulation, which is on a par with the impressive volume of transmission, almost completely disconnects attention from external noise.

If you are looking for a modern, inexpensive and comfortable gadget for everyday listening of music on the road - pay attention to Geozon Wave.

How to overclock your monitor?

How to choose a laptop?

How android is better iOS?