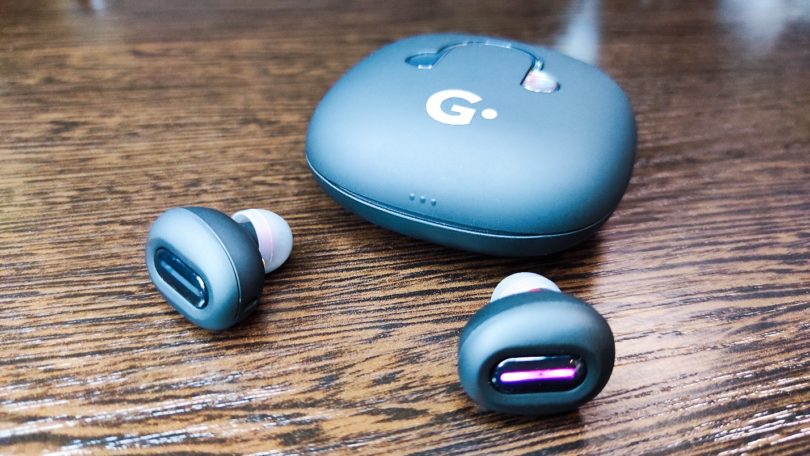 In the rolling world, one of the proven ways to burn out from a noisy, fussy megalopolis and get a charge of positive energy, it became immersion in favorite music. At the same time, more and more urban residents prefer compact headphones, which are deprived of obsessive wires, allow you to make incoming calls and will be combined with different clothing style. Today we will look at one of these heads, Geozon Track - curious arrows from the Russian manufacturer of smart gadgets.

We continue to explore the promising line of G-Sound Wireless Headters from Geozon. In previous reviews, I told about one of the most younger representatives of the GEOZON G-BEAT seriesand about its more representative fellow - Geozon Wave.

The headsets earned praise for ergonomic design and increased attention of engineers to ease of use of both the headphones themselves and their charging platforms. In addition, both devices fully correspond to the stated characteristics and apply at very reasonable prices.

Our new guest, Geozon Track, not only has a complete set of best qualities of predecessors, but also demonstrates several important advantages, including improved Hi-Fi sound and even greater battery capacity. I'll tell you more in the article.

Geozon Track are laid in a small box with Very tightly covered with a lid. On the front side, the gadget and its dignity are traditionally depicted, on a revolving - detailed characteristics, manufacturer data and importer. With flowers this time without options - the headset is still distributed in a black solution. [43!. Medium-sized pads are installed directly on the headset.

The visual style of the gadget is noticeably different from previous models. Futuristic minimalism has been replaced by some respectability. Even the silicone earplugs have been given a translucent blue-gray hue with coral red accents on the inlays framing the headset's speaker.

The all-black charging case is shaped like a super-ellipse. Both in size and appearance, it resembles a jewelry box. The case is covered with a matte black Soft-touch coating, which reduces the chance of cracks and chips on the case. In addition, this coating is more resistant to negative temperatures.

Despite the protective properties attributed to the coating, the charger collects fingerprints on the envy of any glossy surface. But thanks to him, the case and the headset itself do not slip, which means they will lie better in the hand, which is important, because we will use the gadget mainly outside the home and on the go.

The case has a hinged lid with a small magnetic closure. In the closed position, it is held by a latching mechanism, which is unlocked by lightly pressing on a small ledge on the side. A sticker with a hint about its location is provided.

The outer side features the GEOZON logo and transparent windows in the shape of on-ear headphones through which the backlight of the headset being charged is visible. The headphones themselves are recessed into the slots allotted to them, but they do not go in as cleverly as their counterparts in the series.

The base of the headphones is made in the form of an oval, in the center of which are recessed elongated buttons equipped with LEDs. From the opposite end, the headset only slightly protrudes forward with speakers, which, as expected, end with ear cushions. 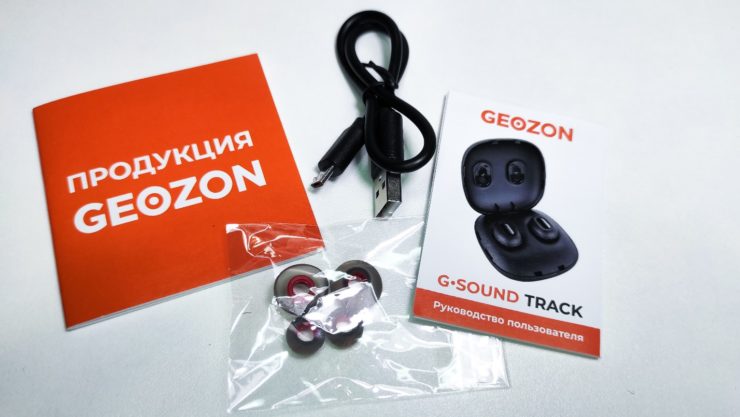 It is worth noting that this time the design does not provide additional stiffeners. The headset stays in the ear solely due to the shape of the case and the in-ear structure. It seems to fit into the shell, clinging mostly already inside the ear.

It may seem that this is an unreliable solution, but in fact the device does not tend to fall out at any head position and even with strong shaking. The main pressure falls on the so-called tragus of the auricle and, depending on the individual characteristics of the structure of the ear, can cause slight discomfort.

Like its predecessors, the headphones wake up when you take them out of the case. They will turn off on their own if they are outside in an inactive state for about ten minutes. In this case, a few seconds hold any of the active keys will lead them to the sense. Turn off the device can be similarly placing it in the case or using the button.

The pairing also occurs automatically. The process is accompanied by LED indicators on the buttons: the left flashes, and the red should go out. Now it is enough to find the device in the Bluetooth section of the phone and connect. 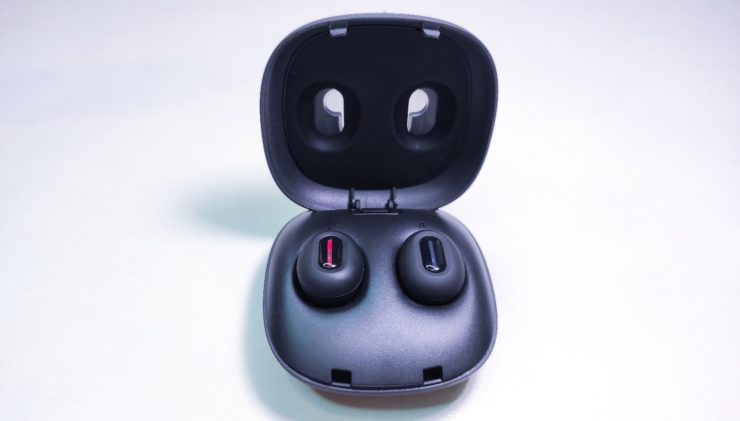 No problems arose with the connection, but the mating was periodically lost and the right earphone stopped functioning for a few seconds. In my case, the problem solved the reboot of the smartphone, but most often the cause of the headset is becoming the cause. In this case, the recovery of the factory settings will come to the aid, which is also provided in Track.

I described above that, instead of sensors, the headset is equipped with massive push buttons. It is quite rigid to not activate randomly. As a result, it follows the same problem as WAVE - pressing the button is accompanied by unpleasant sensations in the area of ​​the ear membrane.

Reply to the incoming call, complete the conversation session, turn on the music track or suspend its playback by pressing any of the buttons. Switching between tracks back and forward is carried out by double pressing the left and right earphone key, respectively.

Triple click will call for help voice assistants of your operating system. Unfortunately, the device does not provide for the ability to adjust the playback volume and it is not possible to program manually. 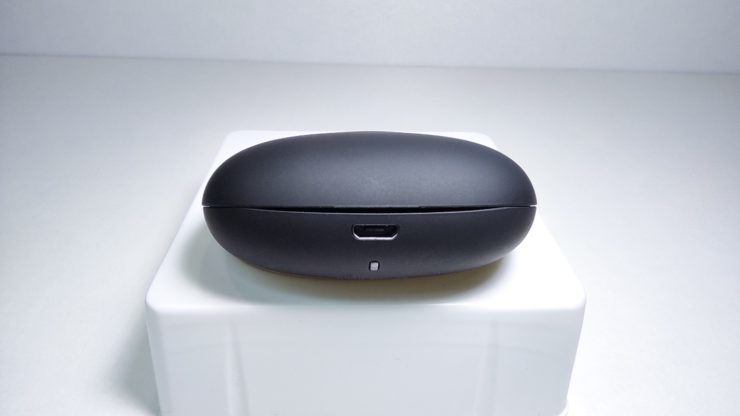 The cumbersome headset does not seem and due to the correct shape of the body does not emphasize attention. In addition, it is a matte-black, which means against the background of almost any everyday clothes will look like a stylish and natural accessory.

Charging the case is traditionally carried out via a USB port connected to the device with parameters no more than 5V, 2A. As long as the drive is filled with energy, the LED indicator will flash on it. After completing the charging, it will simply light up red. The time will be needed slightly more than for previous models due to the increased capacity of the battery - 420 mA * h.

The headphones themselves, as it is not difficult to guess, are very quickly saturated from the native ports of Case. The headset withstands four hours of operation without recharging, and their base stores more than 20 hours. The total device is enough for the whole day of work that I am with some error, but I can confirm on the personal experience of use.

The main advantages of Geozon Track are in its sound. The fact is that the Bluetooth transmission standard originally compresses the incoming signal, and only after that broadcasts it in the speakers. The sound quality depends on which the headset and smartphone are equipped with how the decoding algorithm is equipped.

Track Supports Advanced Audio Coding format - more efficient algorithm than standard subband. In this regard, they are akin to airpods or beats, because AAC is the main codec of the apple ecosystem. The problem is except that they are not supported by each smartphone.

In my case, the smartphone automatically picks up the optimal codec and this as well. By the way, to learn what formats your gadget is most often using the developer settings in the Bluetooth section.

As it turned out, Geozon Track sounds not only loud, but also very confident. Headphones demonstrate surprisingly deep bass and good outlined high frequencies. Which of the direction of music I did not drive through the player, the speakers obediently responded to the filters settings and with a moderate volume were given a rich palette of sounds.

The microphone also did not lead. Before the interlocutor, your voice comes very steadily and clearly, but with background acoustics. Sound looks like a loud connection. The speaker is heard as if his voice sounded straight in your head. That is, not with some particular part, but immediately from everywhere. And too, clearly and loud.

Soundproofing is at the same time in an amazingly high level, comparable to overhead analogs or expensive intra-channel headphones. And despite the unusual sensations, even after two hours of uninterrupted use, the ears almost do not get tired. 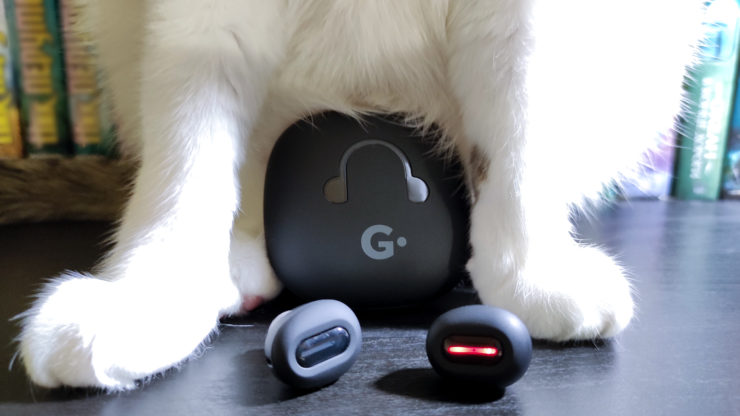 Based on the whole voiced, it can be concluded that Geozon Track exceeds More budget models G-SOUND in everything, but it is not entirely true.

For example, the shutter of the Charper Case Track did not cause me confidence: the headphones in its slots are not always exactly, and to conveniently fix the headset in the ears, it falls for some time to look for a comfortable position.

All these problems are deprived of its younger, even the most inexpensive fellow, as, however, are deprived of the main advantages of Geozon Track, namely a good dynamic range with movable bass, highly sensitive microphone and batteries designed for 24 solid load hour.

If you are ready to pay a reasonable price for flexible and surround sound, do not rush to spend tens of thousand rubles on branded wireless plugs. Look at Geozon Track and, it is possible, you will be able to save very cool.