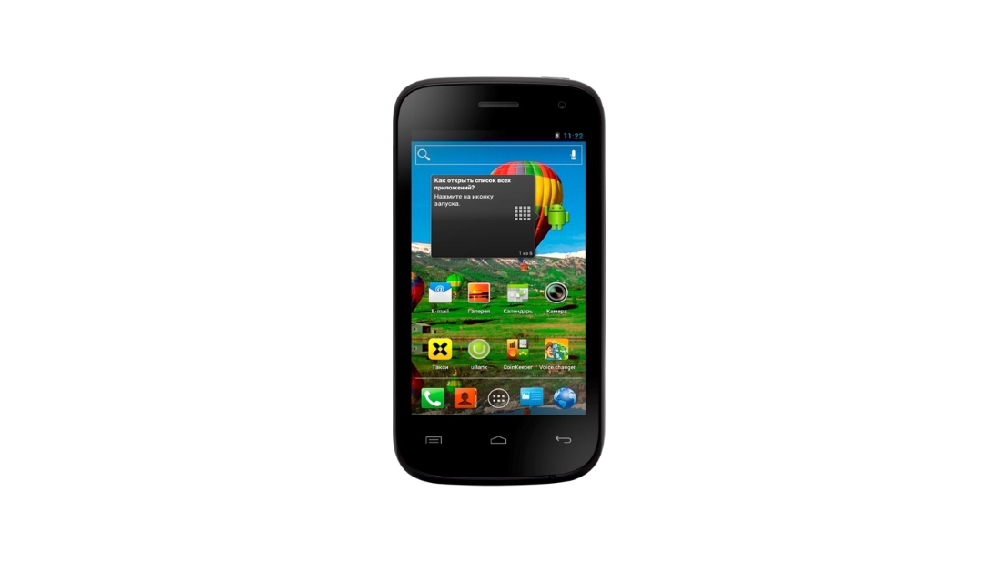 The company Fly expands the score of the smartphones. Here, the following model IQ445 Genius appeared, which refers to the middle class, is equipped with a 4-inch touch screen, a 2-nuclear 1-gigahertz processor and supports the operation of two SIM cards. So, consider the main characteristics in our mini-review.

The appearance of Fly IQ445 Genius is nothing special. Design is typical for many mid-level Android-smartphones.

The front surface almost all occupies the display over which the approximation sensor is located, the front camera and speaker, under it - three touch keys with white backlight: "Menu", "home" and "back". On the back, you can see the main chamber with LED flash, the company's logo and the external speaker.

The upper end is 3.5 mm headphone output, microUSB port and the on / lock button, on the left side - the sound volume control key.

The device assembly is performed quite well: there are no screens when working and the backlash. The gadget is very convenient to use one hand, the case materials are pleasant to the touch.

The device running the Android operating system is functions 4.1 Jelly bean.fly IQ445 Genius is based on a 2-core MEDIATEK MTK6577 processor with a clock frequency of 1 GHz, PowerVR SGX531 and 512 MB graphics accelerator. In general, the smartphone has medium-sized characteristics, so it is not necessary to count on high performance, but with irreter-mounted games and applications, it copes without any difficult tasks.

Integrated memory is 4 GB, but it can be enlarged using microSDHC cards (max. 32 GB).

Fly IQ445 Genius is equipped with a 4-inch capacitive display performed using TFT technology, with a resolution of 800x480 pixels. Of course, the screen does not pull on the assessment perfectly, since it is significantly inferior to HD displays, which are already very common.

The viewing angles in the matrix are not high, but the fading in the sun is strong.

But for a segment, where the price is located in the area of ​​6-7 thousand rubles, this screen is quite suitable.

In Fly IQ445 Genius, a 5-megapixel main camera with LED flash is used. It is able to take pictures with a maximum resolution of 2560x1920 pixels and record video with a resolution of 1280x720 pixels and frame frequency 30 per second.

There is no special complaints to the gadget chamber. She takes pictures at the level of other models with 5 megapixel chambers.

Also in the smartphone there is a frontal VGA camera for video links.

Fly IQ445 has a lithium-ion battery with a capacity of 1600 mAh, which allows, according to the manufacturer, to work up to 5 hours in conversation mode and up to 400 hours in standby mode.

In practice, the gadget was able to operate about 3 hours 10 minutes when viewing high-resolution video at the maximum screen brightness. When surfing on the Internet battery was enough for 4 hours.

How to change the application icon on Android

The best launchers for Android