(Fig. armor, but a pleasant design and good characteristics with a very modest, competitive, price tag. Our hands got a new model DOOGEE X95 Pro: We tell what it is capable of.
Content

Long rectangular white box carries minimum of information: Smartphone images in three colors - black, Blue and green, brand names and models. Separately, it is noted that the device comes with Google applications - it is useful to know in the era when some gadgets cost without the services of a software giant.

Opening the cover, we detect dressed in a silicone case doogee x95 Pro, a paper clip for tray extracting SIM, Document Set, Charger and Cable MicroUSB for charging and connecting to a PC.

The smartphone is protected not only with a complete case, but also transport films on the screen and rear. They will have to be removed, however, it is found that the display is covered with an additional protective glass, glued from the factory. Such attention to the integrity of the gadget pleases.

The DOOGEE X95 Pro case plastic, the back cover has a barely tangible ribbed structure, which adds the phone to the grasp. The variant in black color is the most boring; I got a model, which has a rich blue tint on top moving into a dark purple at the bottom. There is a version in green.

On the upper end of the device, it is located 3.5 mm The connector for wired headphones - many now refuse it, moving to wireless gadgets, but it will not be superfluous. In the lower end - the microUSB connector, although obsolete, but still very popular, especially in the budget segment, and the slot for the speakers. For symmetry, designers added slots on both sides of the charge of charging, but do not be deceived - there is no stereo sound.

on the left side you will find the volume rocker, and on the right - The on / lock key and a slot for two SIM cards, combined with a microSD slot. Use at the same time two sims and memory card will not work - you will have to choose.

At the top of the display, exactly in the middle, the "drop" with the front camera and the approximation sensor, over it - a conversational speaker. The block with the main chambers is in the middle of the back of the case, and not somewhere on the side, as is customary. It combines three modules (13 + 2 + 2 mp) and flash. Fingerprint scanner In this model, there is no, you can protect it with passwords or your face - "Frontalka" can recognize the owner.

The impressions of the assembly and the appearance of the Doogee X95 Pro are only positive. In the hand lies perfectly, the housing does not creak and not the backup, the lid does not bend when pressed, the equipment cover and protective glass cannot but rejoice, and the pleasant color gives the gadget and its originality.

The smartphone works on Android 10 with a minimum of change. In the list of unique features - a few new gestures, such as double pressing the power key for quick access to the camera and contactless screen unlocking (just to wave a palm in front of it). It also has its own DuraSpeed ​​environment, which prohibits unloading programs and games from memory, providing their uninterrupted operation, and gaming mode that allows you to block pop-ups and incoming calls while the gadget is busy virtual entertainment.

I really liked the preset "Bag with tools": This is a set of applications for repair and construction, which includes a sound meter, wall-mounted level, transport, plumb, magnifying glass. Applications are working at the expense of the built-in smartphone sensors - and these are really useful tools in case a real plumb or level will not be at hand.

Otherwise, we get a familiar interface, which, by the way, works without noticeable lags, but occasionally still stutters a second. A rather weak quad-core MediaTek Helio A20 MT6761D processor is installed here, the low power is compensated by a large amount for a state employee of RAM - 4 GB. Doogee X95 Pro is able to simultaneously run several applications, quickly switch between them, but it is not necessary to wait for it impressive performance.

However, the hardware part of the device is sufficient for messengers, instagram, cloud services and other undemanding programs. With the game, it is expected worse, however, the same Call of Duty Mobile, Pubg and Asphalt 9 work on a smartphone, albeit with medium and low graphics settings.

32 GB of a smartphone permanent memory (can be expanded with a card) enough to store multiple games, music, gigabytes photos and other files. And autonomy (the battery is used for 4300 mAh) enough to use it a couple of days without recharging. The gadget is gaining a complete charge for two more than an hour.

I will say honestly: the camera is not the strong side of the DooGee X95 Pro. The rear block contains three modules: the main on 13 megapixels and two auxiliary 2 megapixels. They are complemented by a bright LED flash. Front camera - on 5 megapixels.

The camera can shoot in several modes: monochrome, and with various broofers, bokeh, night mode, as well as professional, where the user can independently set the ISO level, white balance and so on.

In the daytime and clear weather, the smartphone gives out quite decent photos, although a little soaps a picture on the edges. With macro, he also copes well. With bokeh - worse, aggressive blur of items are not in focus makes the image unnatural. Night photos are quite noisy, and the details are lost in the shadows. I could not detect the difference between the usual and night regimes - I get the same picture in both modes in the dark.

Video can be recorded in a resolution from 480p to 1080p, there is no stabilization. The picture quality is not surprising, but I can't say something bad about him - it is acceptable for, for example, records Storsith or a video into a blog.

To view the captured content (as well as any other, however), there is a 6.52-inch display with a resolution of 1600x720 and pixel density 269 PPI. The screen is bright, very saturated, well read even under the right sunlight. Involutionary performance works without failures, there are no questions in this regard. Perhaps the display is one of the main advantages of DooGee X95 Pro, and if this is a decisive factor for you when choosing a smartphone, you will not be disappointed by taking this model.

Included with a smartphone there are no headphones, but any headset does not adequately sound in a bundle with DooGee X95 Pro. The sound is loud and clear, built-in DAC knows its business.

External speaker tries to shift everything around, and it is good for ringtone or alarm clock, but I recommend listening to music and watch video in headphones, because from mono-dynamics you are unlikely Get the desired effect.

Smartphone connects to Wi-Fi At the frequency of 5 GHz, which pleases, given the dissemination of new communication standards. Bluetooth also demonstrates a confident reception, as well as GPS, which detects satellites in seconds. Someone may not be enough NFC, but for the price category of the device, the lack of contactless payments is normal.

As for conversations on the phone - everything is fine: the interlocutor hears me perfectly, like me, and the approximation sensor adequately triggers when I am preparing to answer the call. 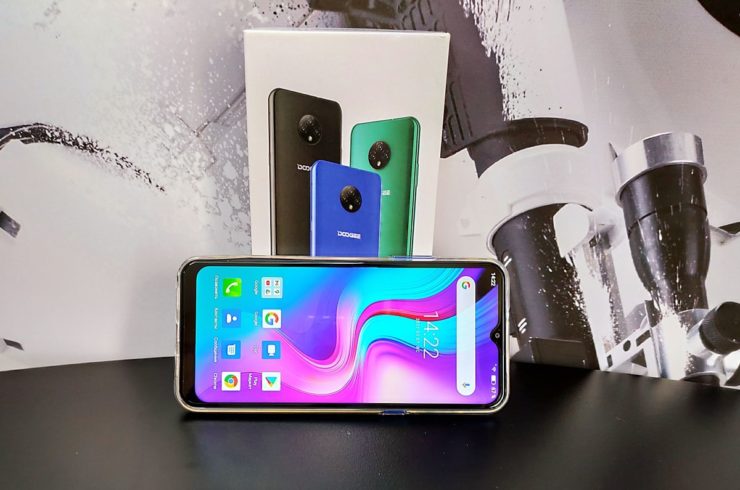 DOOGEE X95 Pro - Confident category representative Budget smartphones, which is just a little lack of forces to be married to the middle segment. Weak processor and not impressive cameras here are compensated by an excellent screen, good autonomy and amazing design. If you need a game phone or cameraphone, then, perhaps, it is worth searching for other options, but for calls and consumption of the media system, this gadget will definitely become an excellent choice.

Infinix Note 11 Pro smartphone review - for those who love more

What to do if the phone is quickly discharged

The best runs for running