A company that has become accustomed to disappointing, this time managed to construct something worthwhile.

At the end summer 2018 Cubot introduced another model of its "armor-piercing" line, named after a giant monkey. The novelty immediately intrigued gadget lovers with its characteristics and cost - quite low for secure devices. Now one could predict the success of Kubot King Kong 3, if not for one "but": competition. Even such exotic goods as inexpensive smartphones with protection are offered by Chinese sellers in abundance.

So will the third King Kong be able to prove himself or just go unnoticed? About how the device from Kubot can outperform competitors, we will tell in this review.

Cubot King Kong 3 is sold in a white cardboard box with a concise design. On the front there is nothing but the engraved name of the device.

Inside the box you suddenly find another box - and there are accessories in it:

In addition, the kit includes a needle for removing the SIM slot and many different pieces of paper: a warranty card, instructions and an insert reminding you that The battery of the device is non-removable.

The first thing that comes to mind when getting acquainted with the device is how heavy it is! Almost 300 grams! Protected Vernee V2 Pro, which visited our review earlier, weighs a little more than 250 grams and at the same time has an even more capacious battery. Cubot KingKong 3 does not give the impression of a bulky gadget if you look at it "in full face" - but if you turn it sideways, you are convinced that it is already very thick. You can’t immediately name another device that would have similar dimensions. 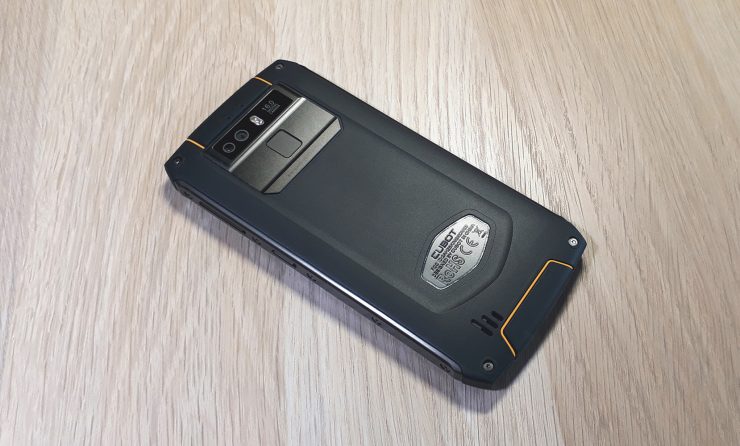 Kubot developers sacrificed ergonomics for the sake of reliability of the device. The sacrifice, apparently, is not in vain. The third King Kong has become stronger than the previous one - this is what it can withstand:

The gadget is protected according to the standard IP68. Made mostly of rubberized plastic, has a metal frame. It looks like a compact walkie-talkie - although it cannot be said that the design of the device is unsuccessful. The rear panel with a metal insert, where 2 camera eyes and a fingerprint scanner are located, looks absolutely gorgeous.

The device is “stitched” along the edges and ends with large screws. Mechanical elements are placed quite typical. On the right is the Power button and the volume rocker. The keys, alas, rattle - and this can be annoying, because when buying a secure gadget, you expect the elements to fit perfectly. The top end is empty, but on the bottom there is a connector for recharging and connecting a headset. It is covered with a cap. Finally, on the left is a SIM card slot - it is removed with a needle and with great difficulty. The slot is combined - you cannot put a pair of SIM cards and a flash drive at the same time. Also, there is an additional button, the functional purpose of which we did not determine immediately. Only climbing the manufacturer's site, we learned that this is a "custom" button, the function of which is installed through the settings.

Design Kingkong 3 can be described as specific. It is difficult to imagine such a weighty apparatus in the hands of a girl. But for the tourist the very thing. The smartphone is really a multifunctional one - they can not only enjoy both a means of communication, but also to open the coconuts, as well as beaten from polar bears during a tour of Svalbard.

at King Kong 3 Screen Diagonal for half a do more than the King Kong model (5.5 inches versus 5 inches) - at the same time Dimensions of devices are similar. Here it is - the magic of the aspect ratio of the displays 18: 9! That is such a new model and can boast.

The screen resolution changed insignificantly - instead of 1280 × 720 it became 1440 × 720. It is believed that the HD + permission for 5.5-inch screen is not enough, but no complaints can be no complaints to the image definitions on the King Cong. But the brightness screen is clearly lacking. According to the manufacturer, the brightness is 450 CD / sq. M. The digit is "delicious", but on the fact the picture on the bright sun fad and becomes almost indistinguishable.

upsets the fact that the screen settings are at least. You can adjust the brightness, enable adaptive mode - and that's all.

The rear camera at the smartphone is double, the main sensor from Sony and has a high resolution of 16 MPIX. It seems to be photographed the device should be wonderful, just there is one drawback at the camera - a slow focus. If you take off with a flash, the problem is manifested particularly critical. You have to wait 2-3 seconds - because of this, sometimes in the frame turns out to be at all what was supposed to be.

Application Interface " Camera" - the usual Android user. In addition to the standard shooting mode, there are also modes " Panorama", " Blur background" (" Blur") and " Beauty". The user can manually configure the exposure, white balance and other parameters.

in the quality of the photo, alas, far from the ideal. Lack of clarity - when approaching the picture "Ryabit".

13- The megapid front camera clicks quickly, the focus and the flashes do not have. Selfie are so-so obtained, the image quality is approximately the same as from the rear camera. For instagrama, it is hardly suitable - the truth is "Instagram" usually prefer completely different phones.

Performance - Not the most important quality of the protected phone; Still, such gadgets are not at all for games. However, Kingkong 3 is all in perfect order.

The device is equipped with 4 GB of RAM and by an 8-nuclear processor Helio P23. According to the results of the audit races asphalt 9, a smartphone from a cub is pleasantly surprised - a new and pretty demanding game went "like oil", without freezing and lags. The test results on the Geekbench have pleased more: the gadget scored 875 points in the same-core mode and 4091 points in multi-core. That is, by the performance of King Kong 3, the models with models OnePlus 3 and Google Pixel, which work on Snapdragon chipsets - and not the weakest.

built-in memory 64 GB. Of these, about 10 are busy with system files and pre-installed applications. If necessary, memory can be expanded by the card microSD, adding another 128 GB.

The smartphone works on Android 8.1 without a branded shell. The manufacturer brings himself in a plus, and here he is perhaps right. Pure android - pledge of speed. For all the time of testing King Kong 3, the device never hung and did not even doubt what the new software pulls.

I finally got to the "sweet" to NFC. On protected devices, this function is a rarity, so we were pleasantly surprised. Checking with NFC Checker gave a positive result - the application showed that the sensor works "on excellent."

downloading Google Pay and downloading data cards, we went to the nearest "pyatnoche" in order to check NFC "in the field conditions " Paying the purchase by contactless way with the help of King Kong managed without problems - True, the seller seems to be pretty embarrassed by what we are going to lean the device with another PIN pad to PIN-Pad. So your humble servant, risking the retrograd, perhaps, I would still prefer to pay "in the old manner" - a plastic card.

Smartphone from Cubot sounds moderately loud. According to this criterion, the gadget is not a record holder, but I can't call it quietly. The " Besloudness feature is responsible for gaining sound.

any other curious technologies associated with the sound, the device is not.

Owners of capricious and constantly requiring fuses of iPhones may seem strange that in a week, during which King Kong 3 was tested, we So they did not print it Charger. The autonomy of the device is above all praise - in standby mode it will last 600 hours, and this is on a second, almost a month.

The manufacturer leads other numbers:

According to our forecasts, the smartphone will stretch 4-5 days without recharging during moderate use (calls, Internet). Or maybe more - if you activate in the settings " Energy Saving Mode".

The gadget supports a quick charging. Just 1 hour is needed to fill the battery to 65%. Up to 100%, the device is recharged in 150 minutes.

COOD company released several unsuccessful models in previous years, so we had a King Cong 3 model Snacking skeptical attitude. However, after tests from skepticism, there was no trace. We are ready to admit that King Kong 3 is one of the best protected apparatuses that came across into our hands - if not the best at all. 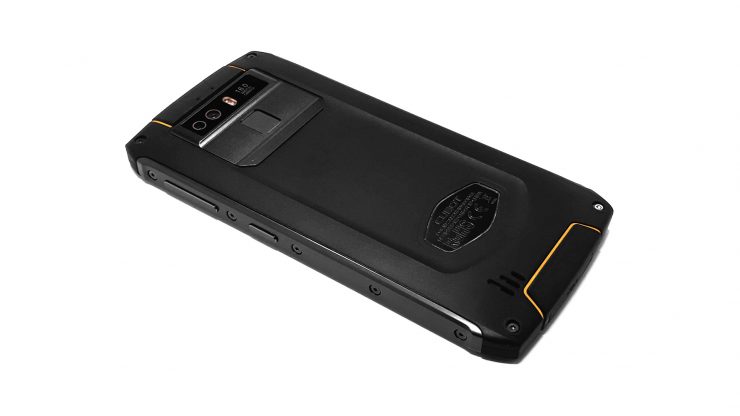 at a cost of about 14,000 rubles The CUBot smartphone can offer the user as follows:

A significant disadvantage can be called only a large weight of the device. A little less than 300 grams - reasonable doubts arise whether it is worth calling such a mobile phone.

Order Gadget can be on the trading platform Gearbest with a big discount - just for 11244 rubles. In the period of the promotion!

Why Examless Screens in Laptops is a bad idea

How to choose a quadcopter: Guide for beginners fly