BQ-2824 Tank T - Budget Push-button telephone, the main chip of which is a built-in thermometer.

Modern person is difficult to imagine without a touchscreen smartphone - the phone numbers, as many may seem, already in the "past century". But Statistics says the opposite - almost a quarter of Russians (23%) in 2019 preferred to buy precisely such simple phones. That is, every three smartphones account for one button.

As you guessed, our guest is the push-button telephone from the company BQ. Is it a "tank", as indicated in the title, and how the built-in thermometer is working, declared as the main function of this device - learn in our review. 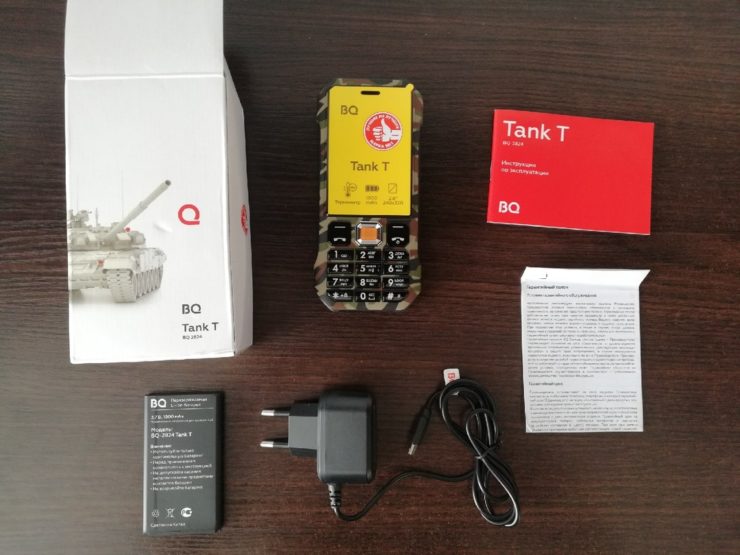 The phone arrived in a simple cardboard box. The equipment includes the phone itself (thanks, the captain is obvious), instruction manual, warranty card (set deadline - 12 months from the date of sale), Charger with a non-removable cable of type microUSB and battery. Simple, standard set of all necessary.

The screen display is, as expected, protected by an opaque film that lists the most important features. 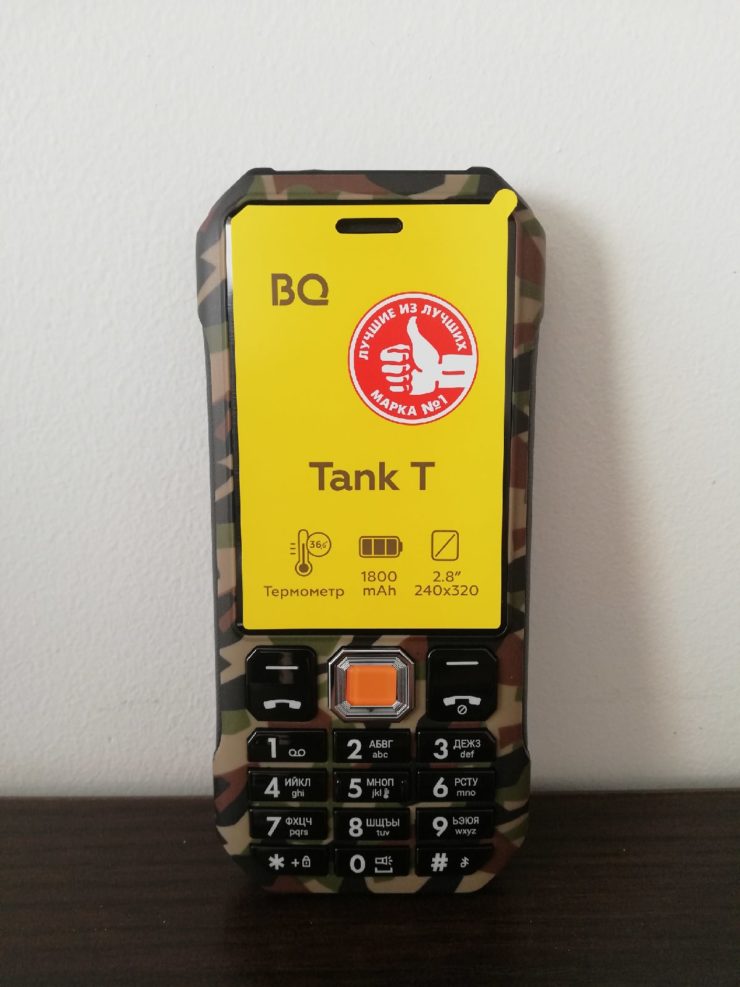 that the body of the device is made of a fairly reliable material - this is indicated by the word "Tank" in the title, and the fact that the design of the body is made in the style of camouflage. In fact, it is ordinary plastic, albeit durable.

Note: by the way, several colors are offered - in addition to the one shown in the photo, there is also black, blue and gray.

On the other hand, this case material made the phone surprisingly light - its weight without a battery is only 75 g. Compared to my smartphone, which weighs about 170 g, the difference is noticeable.

The design is familiar, but attractive. The text on the buttons is large, and they themselves shine and are not without taste. I especially liked the bright orange button. Perhaps the photographs do not convey this description, but take my word for it.

Nothing to say about the screen - it's a regular QVGA display with a resolution of 320 by 240 and a diagonal of 2.8 inches.

Charging and headphone jacks and a microphone are located on the bottom edge. On the top - a flashlight and a temperature sensor. On the sides, nothing. That is, there is no usual button for changing the volume, as well as the one that brings the device out of sleep mode. The back of the phone houses a single camera and speaker.

The back cover can be removed without problems and creaking. You don't need any needles and grinders - just pull it by the allotted place, and you can put a memory card, SIM card and battery in order to go directly to using the phone.

Interface BQ-2824 Tank T not boasts a wealth of possibilities, because the phone is push-button. On the other hand, it is intuitive. If you have ever used something like this, you will easily figure it out. 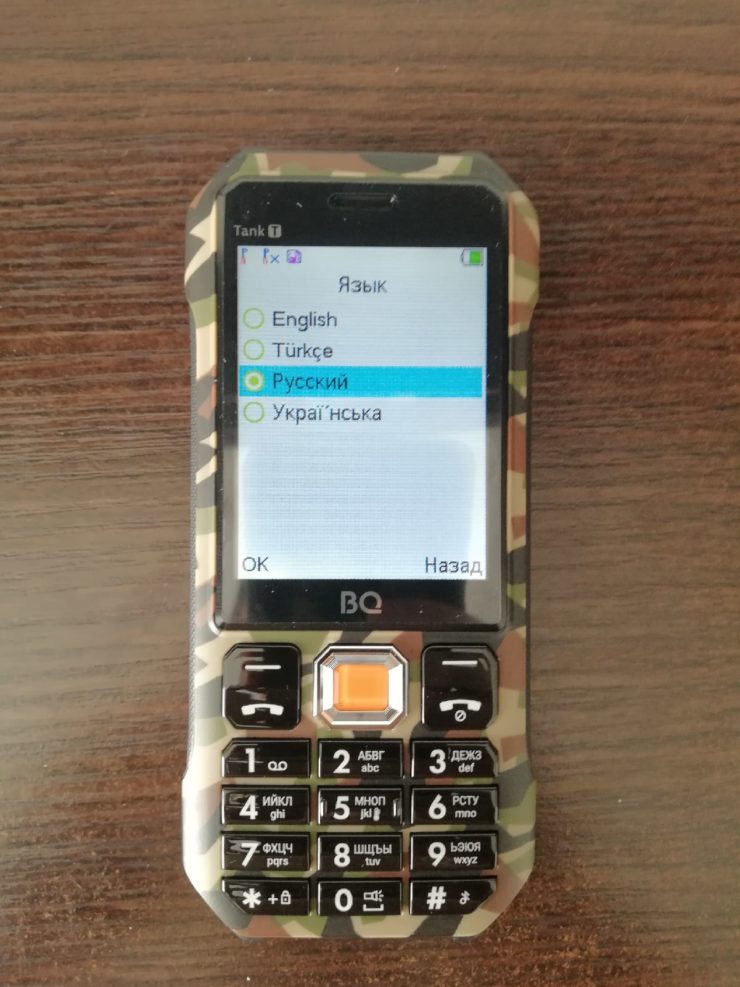 Unlocking is done by pressing a simple combination on the keyboard - this will open a simple start screen, from which you can go to the "Menu ” or “Contacts”. Also, by pressing the navigation buttons in the center (left, right, up, down), you can get to "Messages", " Radio", " Audio Player" and "Organizer", respectively. 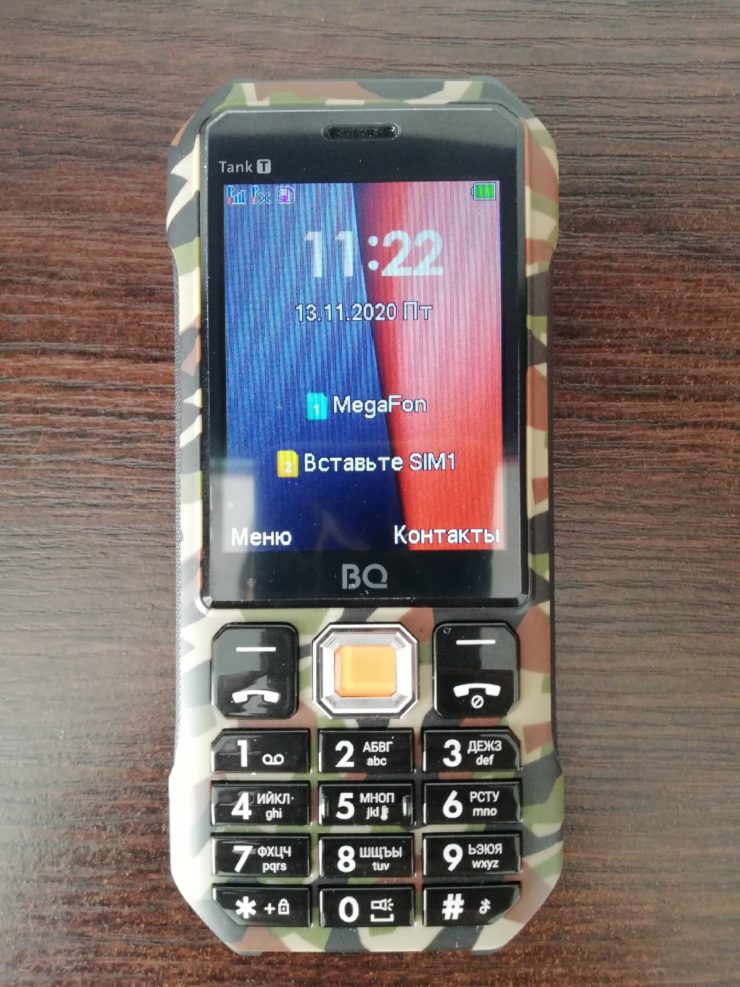 In the menu, 9 sections are located: this is "Fanbox", "Games", "Badges", "Calls", "Messages", "Settings", "Camera", "Multimedia" and "Organizer". By the name of the sections it is not difficult to guess what they are intended for. 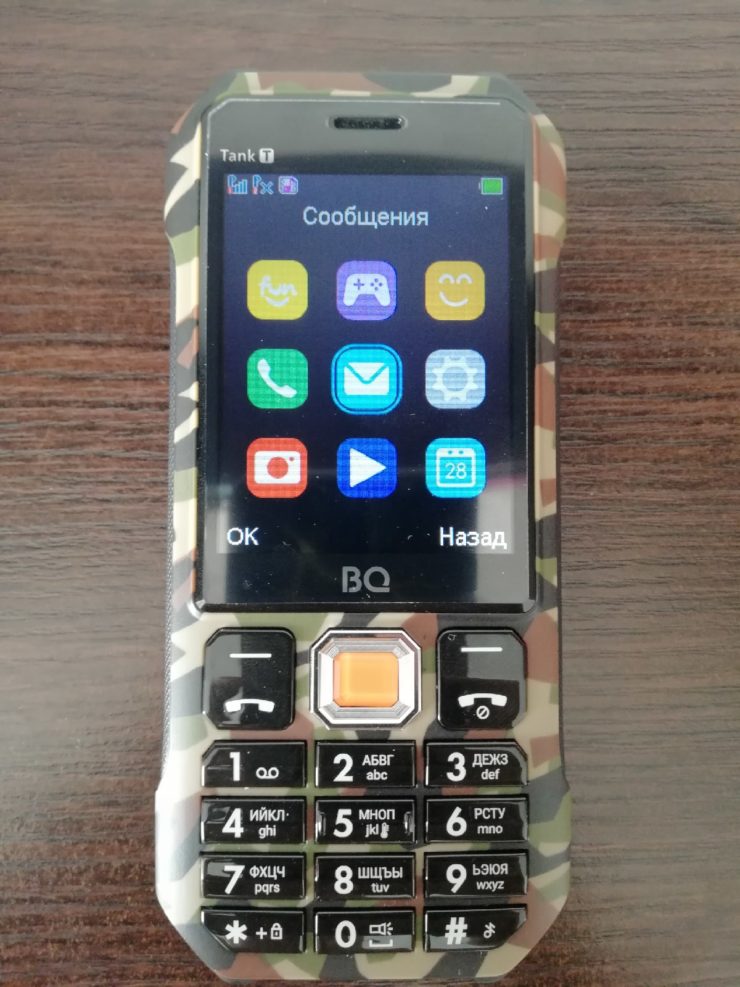 Unless, the questions cause "fanbox" and "mixtures", but there is nothing unusual - these are paid sections, in which are invited to subscribe to the services of jokes, SMS-congratulations, jokes, horoscope and those like it. 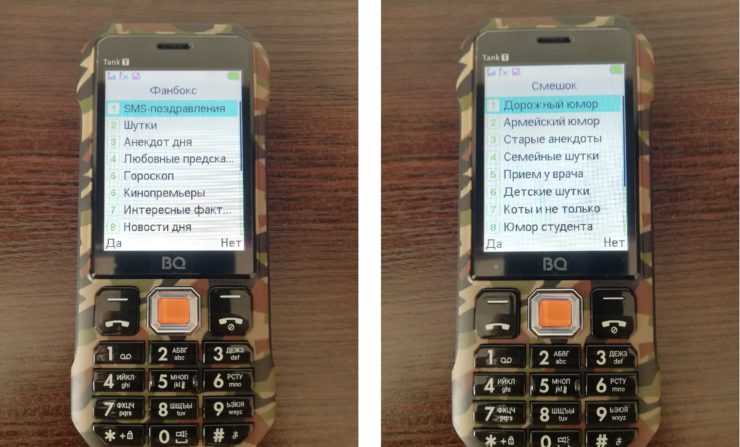 By default, 8 games are installed, but they are all paid - give 5 free attempts. It is clear that such phones are purchased at all for games, but I would like to be able to play free time.

After having studied the interface more detailed, I came to the conclusion that it is most simple as possible. For example, the "Settings" section allows you to manage SIM cards, go to the air, change the background drawing, time and date... In general, nothing superfluous.

But if you get to the "organizer", then you can stay here. All because in it, in addition to alarm clock, calendar, calculator and Bluetooth, the main advantages of the BQ-2824 Tank T are hiding - this is the function of measuring temperature and flashlight. 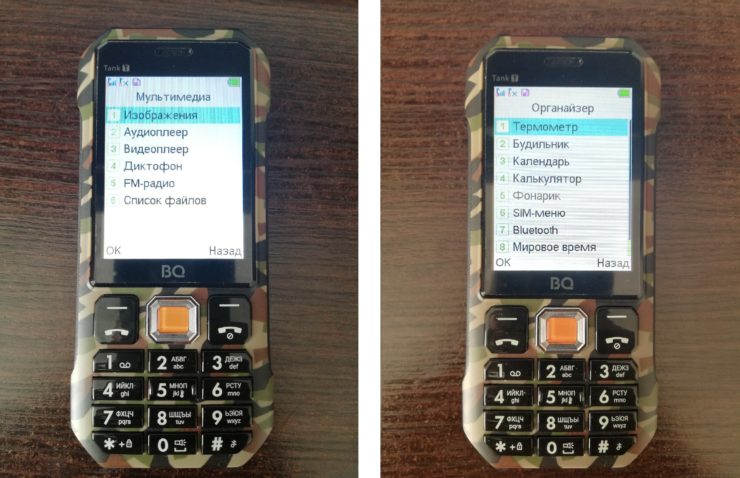 as I mentioned above, On the top face there is a flashlight (right) and an infrared temperature sensor (left). It is enough to bring the phone to any surface, press the button, and after a couple of seconds it will show the temperature of this surface, and quite accurately.

Note: In the instruction manual, they recommend measuring at a distance of 2-3 centimeters. The sensor is designed to determine the body temperature, but we test it and on ordinary things. 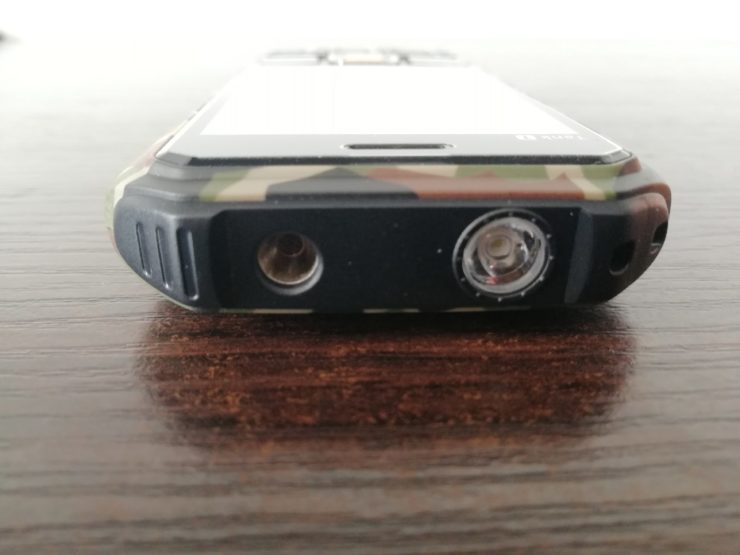 the function in the "Organizer" is activated. We will encounter such a simple menu, where to measure the temperature you must click on the "Start". Below I will show how the meter works and whether it should be trusted.

Let's start with a simple room from the room. The average room temperature is about 25 degrees - somewhere more, somewhere less. And this is what gives our "tank": 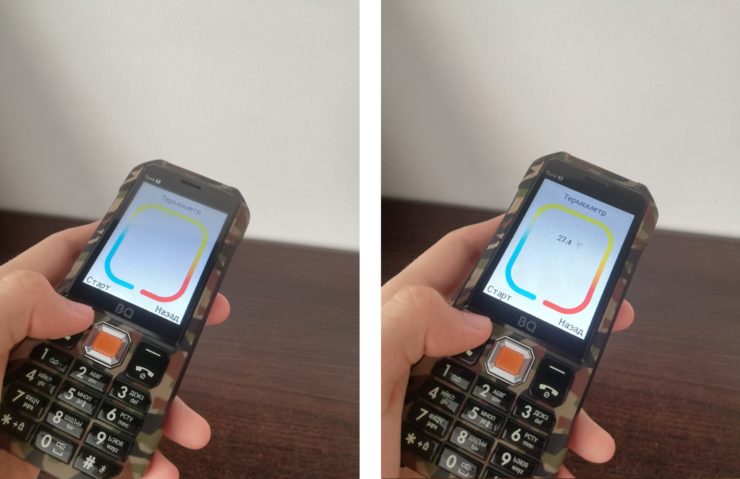 in my room is really fucked, and it looks like the truth.

What will happen if you measure the temperature of the person? Yes, it is possible, it is for this that engineers placed the thermometer into the device. I have everything within the normal range. 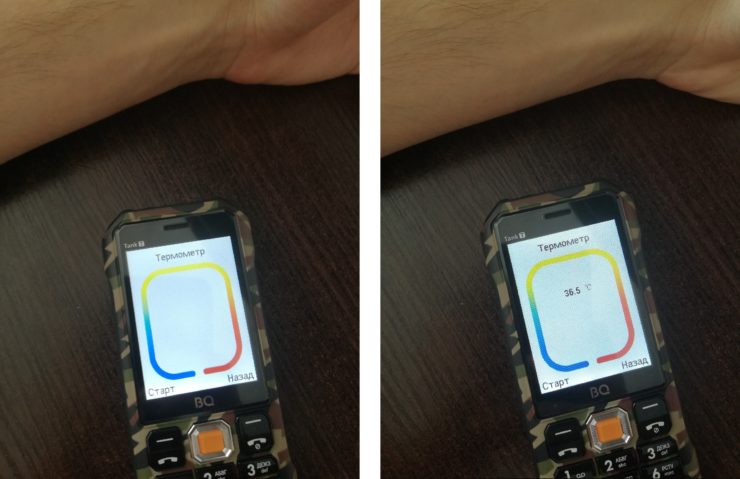 Take anything else, for example, the product from the refrigerator:

is impressive, is it not true? We get a hand remote thermometer, which gives the result literally in a couple of seconds. It is noteworthy that the information sensor reads from several points, so the phone does not need to be fixed and hold for a long time.

It should be noted once again that the main purpose of the device thermometer is to measure the temperature of the human body. With this he copes perfectly, and this is the main thing.

Flashlight - Another strong side of BQ-2824 Tank T. Simply because it is quite powerful. Compare its work (right) with a lantern, which is built into my smartphone (left): 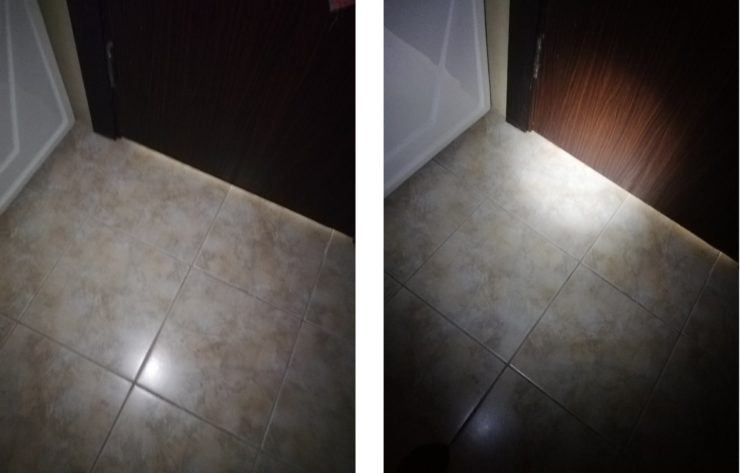 Light from the lantern of my smartphone Scattered, and it is intended mainly for shooting at night, but not to search, for example. But the flashlight BQ-2824 Tank T concentrates the beam and brighter.

What can be expected from the camera at 0.08 mp? Yes, nothing, in general. But I still made two photos from the same perspective at different times of the day and here is the result:

as It can be seen, in the light of the day, something else can be distinguished. But at night should not even try.

On the autonomy of such devices, you can not worry. The declared capacity of 1800 mAh for modern smartphones causes laughter, but for such "tanks", as our, this charge is enough for a long time.

In the percentage, unfortunately, I could not track the battery status - simply because there are no charge numbers. But there are two facts speaking in his favor. First, the phone was half charged when I first turned it on. Date of production - 08/26/20, and I got it on my hands at the beginning of November. That is, in 2.5 months in the off state, he almost did not lose anything.

Secondly, a week after I charged it, the indicator did not empty. I used them quite rarely, but the confidence is that such a phone can not be charged with weeks, firm.

As it was shown above, the speaker is in the rear of the phone. It is convenient - it is very difficult to overlap with your fingers, however, the music will have to listen, putting the apparatus with the screen down. Obviously, the speaker is inexpensive, and therefore there is no excellent sound quality - but in general the sound is not bad. However, for long listening to music, I recommend using headphones yet.

Music can be placed on the built-in radio. To do this, you will need any headset - wired headphones or wireless (Bluetooth connection). As can be seen in the photo below, the headset was not fully entered (I took the headphones that I use for a computer), and therefore keeps not very reliable. However, everything works.

As for the radio, then everything is usually - using the navigation buttons "Right" and "Left" can be switched, and "up" and "down" adjust the volume. In the options you can dig in the settings, create a list of favorite channels, manually adjust the frequency and so on.

With its main task - calls - BQ-2824 Tank T copes perfectly. During the test call, I have heard the interlocutor well, and he is me.

Pleases the presence of two slots for SIM cards - and one of the features of the device is that SIM cards can work simultaneously in standby mode. The connection is kept steadily, there was no discount.

Bluetooth 3.0 support is also present - will come down to transfer data between devices and to connect a wireless headset.

It is quite obvious that the BQ-2824 Tank T is a phone for those who do not need anything other than communication. However, the usual "dialer" company BQ equipped the thermometer and a rather bright flashlight, and as a result, the scope of the "brick" expanded slightly.

The price tag does not bite - on average, at the time of writing a review, 2790 rubles are asked for such a model. The disadvantages are not deprived of it - we all carried out a little lower, but for the most part the device is good and copes with your work "with a bang."

How to connect airpods to Android

The best photo editors based on artificial intelligence

How to copy contacts from iPhone to computer?

How does face recognition technology in a smartphone?