Brand DExp is an inexpensive digital technique. For those who are looking for Budget Tablet To solve simple tasks, the company's products is an excellent option for purchase.

The official history of the brand states that it was formed in 1998 in Vladivostok. Several enthusiast engineers decided to collect desktop PCs, and in 2000 they expanded the sphere of interests, releasing digital and household appliances. According to the official site, DEXP is an OEM project, that is, the assembly of technology is carried out on the order of individual brands and is issued under their name. Production facilities of the company are located in China, Taiwan and Russia. All components are purchased from third-party manufacturers. Thus, the Dexp buys the details, makes some of them a certain assembly and resells under his own or otherwise name.

Russian buyers know DEXP as budget equipment, which is sold exclusively on the network DNS. There is a version that actually dexp belongs to DNS than and the affordable price is explained, a large number of service centers (combined with points of sale) and the presence only on store shelves of this trading network.

Regardless of whether DNS owns the DNS brand, the Dexp or company simply cooperate to the consumer technique released by this brand is a large selection of available digital and household devices. It is quite difficult to talk about the quality of the product, because there is a mass of both negative and positive responses. Is it worth buying - to solve each reader individually, we do not occupy any position, and in the text below we only want to meet you with the best DEXP tablets in 2019.

Children's model from the DEXP brand is released in several bright plastic colors with increased resistance to damage and rubber inserts in the corners for protection during fall. The device got a weak stuffing, which is enough to install children's applications and playback of cartoons. The device immediately comes with a pre-installed software for kids and the function of parental control. Internet access is possible only by Wi-Fi. The built-in memory is expanding due to the card microSD not 32 GB. For the photo there is a frontal chamber 0.3 Mp and the main 2 megapixel. Weight - 350 grams.

New 2019 Made in a classic case with a diagonal of 7 inches. It is suitable for launching undemanding applications, watching video and surfing. The model equipped the IPS display with good brightness and decent viewing angles. Wi-Fi or 3G (support of two sim cards is used to enter the Internet - for calls and internet). Memory expands to 64 GB. Cameras - 2 and 0.3 mp. The device received a GPS module, which allows you to use it as Navigator, there is an accelerometer on board to automatically change the position of the picture. On the case there is an output 3.5 to connect headphones, you can use a wireless headset via Bluetooth 4.0 connection. 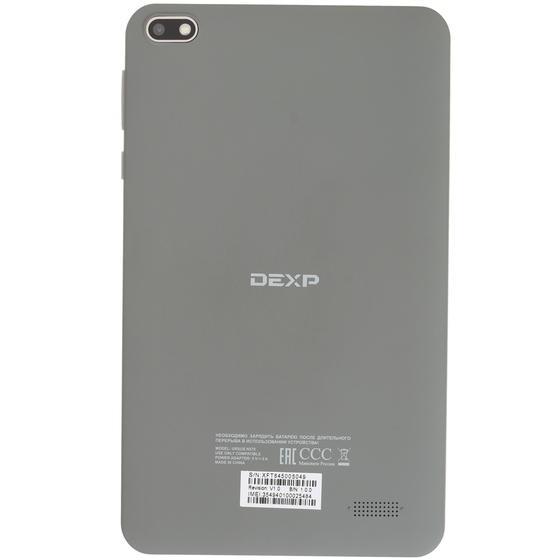 Another 2019 7-inch model. The device is very similar to the previous one, but has received a number of improvements that may make it more relevant to purchase. The device has a higher resolution - for those who spend a lot of time with the tablet, this will reduce eye fatigue. The amount of RAM has increased to 2 GB - objectively, the device works faster. The main camera has a flash. An important plus is 4G support. Unlike the previous model, microSD support is only up to 32 GB.

This model is designed for those who love outdoor activities. The manufacturer placed the device in a protected case, which is not afraid of drops and bumps. From the point of the filling the device is very mediocre, but it has a number of advantages - a powerful battery, support 3G, GPS, GLONASS. Cameras - 2 megapixels with flash back and 0.3 mp in front, for serious photography they will not fit. Weight - 345 grams.

Another Children's tablet from DEXP completely copies the characteristics of the 7-inch children's version with the only difference that this unit has more screen and battery. The device has all the same simple cameras - 2 and 0.3 mp, Internet access only on Wi-Fi. The housing is made of plastic and rubber side inserts - the tablet is convenient to keep and not scary to drop. The model has pre-installed children's applications and parental control. Weight - 370 grams.

The eighty-lone tablet E180 will offer the buyer a good balance between filling and price tag. The device has a good memory reserve, a modern operating system, 5 and 2 megapixel cameras, support for GPS and GLONASS. On the case there is a connector for two SIM cards (Internet LTE and calls), as well as for extensions of memory up to 128 GB by microSD. Weight - 350 grams.

Device with non-standard diagonal 9.6 inches It will be a compromise for those wants something large enough, but not too. The device has a good processor from MediaTek and for its price a decent memory supply. Plastic housing - there are connectors for two SIM cards (3G) and for microSD 64 GB. The device was equipped with GPS and GLONASS, which provides accurate navigation, and here there are two cameras - 2 and 0.3 mp. The main is supplemented with an outbreak. Weight - 475 grams.

Decymalent Tablet M210 can be rightfully called flagship companies - there is a pleasant design that combines metal and plastic, as well as modern 2.5 D display with oleophobic coating. The manufacturer promises that the housing will last in its original form, as it is characterized by increased resistance to scratches.

The device received a powerful ten-folder, which is enough to launch not only simple applications, but also games. In addition to it, 3 GB of RAM was installed, which is quite enough for the modern tablet of the average price segment. The main drive of 64 GB also delights, which, if desired, can be expanded on the same volume.

The manufacturer allows buyers to put two SIM cards with LTE support, and Wi-Fi AC support module, that is, you can sit on the Internet on an unloaded range of 5 GHz. All this is complemented by quite good cameras on 5 and 2 megapixels (there is a flash for the main module), and there is also a GPS and GLONASS. According to customer reviews, there is not enough battery tank, but even the proposed enough for comfortable use throughout the day with average loads.

The best emoji keyboard for Android and iOS

Why Examless Screens in Laptops is a bad idea

iPhone does not turn on: the apple is burning and goes out

How to turn on the flash when calling on the iPhone?