It seems that Surface Duo will become precisely the fact that we have long wanted to see from the company's device. Even though Microsoft officially does not officially call this device smartphone.

The device was presented at the Surface event in October 2019, and recently demonstrated in emulator. Surface Duo absolutely can be called a smartphone, given its functionality. Not only can you make calls from the device, it can also be folded twice, so that it is placed in one hand or in jeans pocket. In addition, Surface Duo will work on the Android operating system. Nevertheless, Microsoft still calls it a "communication device".

To be honest, Surface Duo has not only the features of the phone. The device boasts two 5.6-inch screens, and in the expanded form it can be used as an 8.3-inch tablet. In fact, Surface Duo very much resembles another device presented during the event in October 2019 - Microsoft Surface Neo. It is a larger tablet with two screens, on which Windows 10 is installed, optimized just under two display.

Again, all this sounds quite amazing. Brian Soczi, Yahoo Finance editor, called the Surface Duo "Damn attractive device", as he saw Microsoft's CEO used the early version of the device.

The price and date of release

Microsoft Surface Duo is likely to appear on store shelves by December 2020. We do not know how much it will cost and in which regions will be released first. However, given two screens, it is worth expecting that the device will be very expensive. 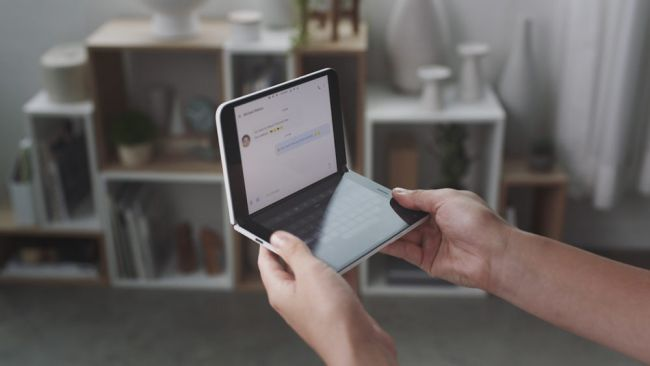 Surface Duo has two 5.6-inch screens, but, unlike other folding devices, the displays are made of Gorilla glass and are separated by a durable and rather noticeable hinge. Thus, the device does not look as good as Huawei Mate x or Samsung Galaxy Fold, but the use of already proven durable glass saves Surface Duo from problems when folding - For example, the Galaxy Fold plastic display is still breaking, even despite its refinement.

In the expanded form, the DUO size reaches 8.3 inches, which is slightly more than that of the iPad mini 5 (7.9-inch display). In addition, the display can be laid 360 degrees using a hinge.

The developer has already released an emulator to simulate the functionality of the DUO DUO screen. Thanks to NEOWIN, we have already received a brief overview of how the user interface may look like, some Microsoft applications and Google, and how the multitasking function will work. And since the device output is still far away, you can expect many applications for two screens in the store.

This distinguishes Duo from Surface Neo, which will work running Windows 10X.

What is glass ceramics? Everything about Apple Ceramic Shield

On the phone gave the sound: what to do?

What is Android TV?