The new rugged smartphone AGM H3 is designed for those who need a reliable device that can work in the most extreme conditions. Everything you need to know about this model is in our review.

The Chinese brand AGM produces smartphones and phones with a characteristic "military" design and excellent security performance. The company's newest addition is the AGM H3 model, which is positioned as the best offer for travel, tourism, hunting and fishing, working in difficult conditions and, in particular, night shooting. Let's find out what this smartphone is ready to offer us.

In a bright orange box decorated with a large print of a smartphone, there are AGM H3, power adapter, Type-C charging cable, Type-C adapter – 3.5 mm for connecting headphones, user manual and warranty card. 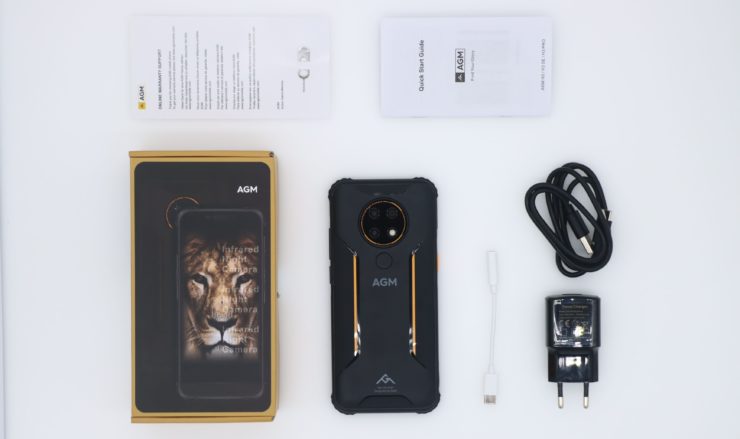 The device turned out to be quite compact, it fits comfortably in the palm of your hand and is controlled with one hand. The front panel occupies a protected glass 5.7-inch display with wide frames from above and below (a fairly conservative solution for a modern trend on curious screens), there was a place for the conversational speaker, the front camera and the approximation sensor, and under it the manufacturer installed a powerful two-time speaker under it intended for Hands-Free calls and play music; His volume is a serious trump card of this model.

The rear panel of polycarbonate is decorated with rubberized inserts and orange stripes that make the design slightly more aggressive. At the top of the back back, a block of three cameras and an outbreak is located under it there is a fingerprint scanner, and a brand name is applied in large letters. 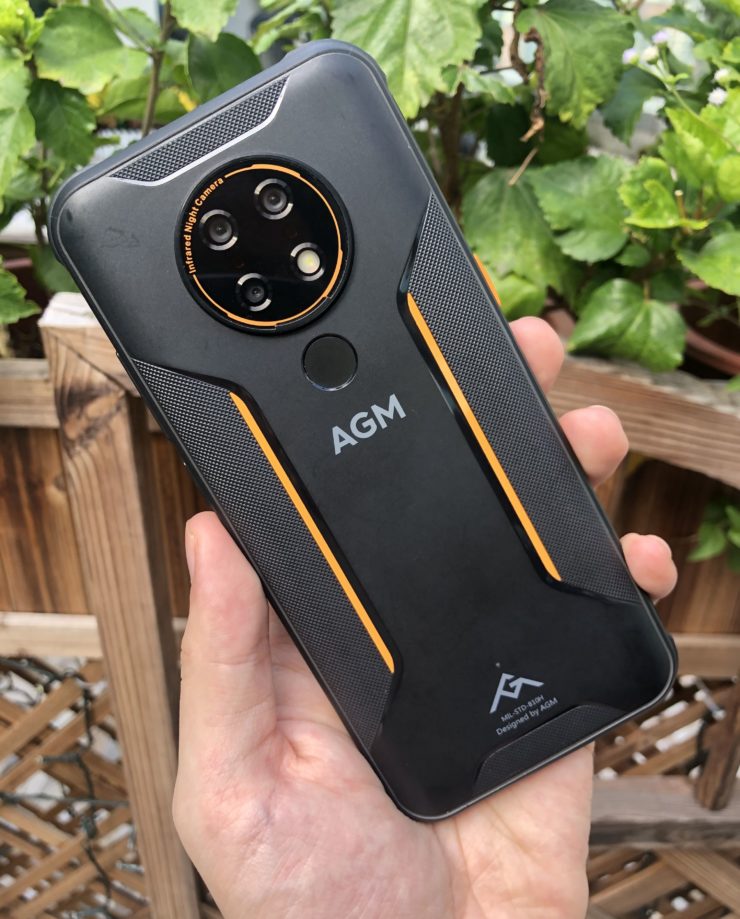 On the right end of the housing, the inclusion and volume control keys are located on the left - the combined tray for SIM cards and the function key which can be used, for example, to start the camera. Immediately there is a slot for charging a smartphone, covered with a plug. The lower end contains a conversational microphone, there is no elements on the upper end. Smartphone angles are protected by additional rubber inserts. 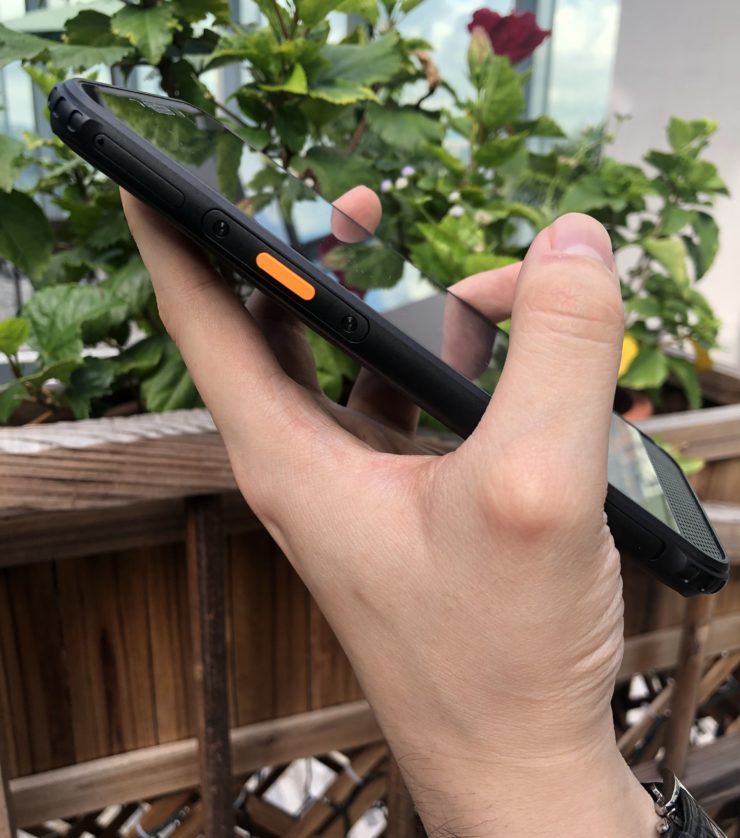 AGM H3 looks suitable for its purpose: at first glance, it becomes obvious that the device is supplied with durable "armor". Large frames around the screen can be embarrassed by the user accustomed to the image models, but it should be borne in mind that in AGM EIC3 is a focus on maximum protection, and the design plays an important, but still a secondary relative to practicality role.

Manufacturer installed in the smartphone IPS display with a diagonal of 5.7 inches and a resolution of 1440 × 720 pixels. For this size of the HD + screen size, more than enough: the image does not fuse, and the pixels are visible only with careful consideration. Viewing angles, brightness and contrast parameters are typical for IPS-panels - a smartphone can be used on a sunny day, the brightness stock is enough to consume information even under the right rays of the sun. 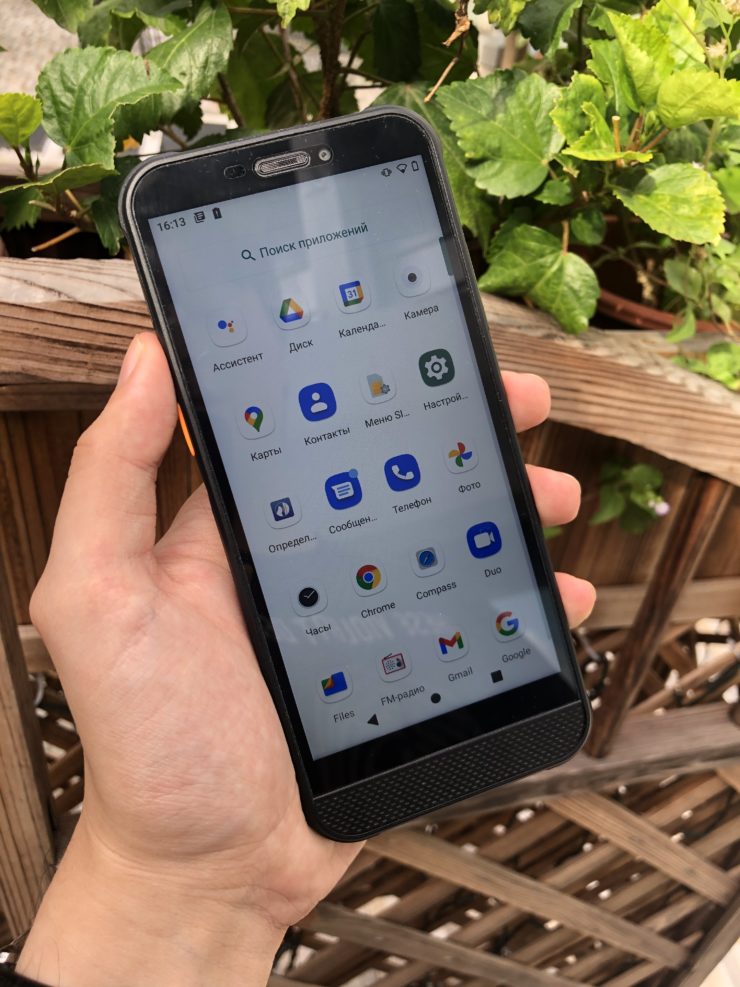 AGM H3 works under the control of the "clean" version of Android 11, and the manufacturer notes that the device firmware will be updated, so Users can be confident in the relevance of the latest security updates. The interface is not overloaded with superfluous elements, and from auxiliary programs there is a compass, FM radio and other useful tools.

The "brain" of the smartphone was the MEDIATEK Helio P22 MT6762 chipset - modern and energy efficient. It carries "on board" the PowerVR GE8320 and 4 GB of RAM. Internal memory here is 64 GB, but it can be expanded using cards microSD. The hardware capabilities of the device do not allow to launch modern games with the maximum graphics settings - it is enough for simple entertainment like card games or projects The genre "three-in-row". However, AGM H3 is not designed for demanding gamers. He takes others: Raised from the "garbage" OS is quickly operating with 4 GB of RAM, and an economical processor in combination with a low display resolution and a 5400 mAh battery provide a device with impressive endurance - it is enough for at least two days (or even more) when active use Lucky You can not worry that the smartphone will bring in the course of a long approach, especially if you take a journey to just in case.

AGM does not try to attract lovers of beautiful Selfie and the storm of the advanced features of photography and video. By part of the chambers here at first glance, everything is modest: 12 MP The main chamber, macromodule and... what is not in "iPhones" and "Samsunghah" for many tens of thousands - 13 Mp infrared sensor, which allows you to shoot in full darkness! You do not have to rely on light sources at night shooting: a smartphone is capable of working as a night vision camera.

The rest of the AGM H3 offers standard shooting capabilities: there is HDR, portrait mode, a pair of "improvements", automatic scene recognition and so on.

The protected smartphone creates a sense of reliability. I am not afraid to drop it, knowing that nothing happens to him. Not that I wanted to drop the device, but can happen anything. Especially during outdoor activities in nature, which the usual phone may not survive. Under a strong AGM H3 shell, well-modern functions are hidden. NFC will allow you to pay with a smartphone anywhere in the world. Fingerprint scanner and face scanning are triggered. And with support for 4G, you can use the fast Internet anywhere.

By aggregate of impressions, a novelty from AGM causes only positive emotions. The H3 model gives its audience exactly what is required of it, and small cons, like a large frame around the screen and modest performance in games, compensate for huge pluses, including protection from dust and moisture, NFC, night Shooting, powerful battery and topical version of OS.

IPhone 8 and 8 Plus Review: Changes in small doses

How to restore the remote application on Android

6 reasons why the iPhone is superior to other smartphones