Apple provides its smartphones with unique features that set the iPhone apart from other devices on the market.

Despite a lot of controversy between Apple and Android fans that seems to never end, it's foolish to deny that the iPhone is a great smartphone that combines creativity, innovation and beauty.

Android smartphones have advanced a lot over the past decades, but still can't match the Apple iPhone in terms of interface (at least).

Every user must have argued at least once which smartphone is better. No matter which camp you fall into, the iPhone offers a lot of features that Android still lacks. Below, we'll talk about six things that the iPhone outperforms its main competitors.

iPhone performs much better than Android smartphones due to the incredible powerful processors. Apple does not rely on third parties to develop its devices. Instead, the American brand itself creates processors, which are then installed exclusively in the latest iPhones. Thus, Apple has full control over both the design and performance of its products.

In addition, processors are relatively larger in size, which allows them to be equipped with additional hardware resources that significantly improve the performance of phones. Thus, more cores, combined with increased cache, allow the iPhone to outperform its competitors in terms of performance.

In 2013, Apple released the world's first 64-bit smartphone processor. Since then, the company has been constantly working to improve its system-on-a-chip (SoC) that improves CPU efficiency and performance.

Qualcomm or Exynos do not develop chipsets for a particular smartphone: the main goal of these companies is to sell more chips to a greater number of manufacturers.

Thus, samsung and Huawei develop their phones, taking into account the existing processors. As a result, smartphones do not boast of durability and high productivity.

Optimal integration of software and iron

as a whole iPhone It offers much better experience from a point of performance, since the hardware of the smartphone is maximally optimized by software (and vice versa). Apple successfully worked on the level of integration between hardware and software components!

That is why the iPhone is not needed 16 GB RAM to surpass the flagship phone based on Android, since Apple hardware and software is optimized for more efficient use of resources.

All this became possible due to the fact that Apple fully controls the process of producing the iPhone.

To date, cache memory is a very important factor in Smartphones work. It works much faster than RAM, thanks to which the larger amount of cache memory allows smartphones to work significantly better.

Various errors and system malfunctions are quite common even on flagship android smartphones. The iPhone is not inclined to this thanks to more high-performance cache.

ARM processors usually contain 1 or 2 MB of cache memory, while iPhone - 4 or even 8 MB.

So what gives more Cash memory? It allows you to quickly exchange data with the processor and increases the overall speed of processing tasks. Despite the fact that the flagship android flagship smartphones are equipped with a huge amount of RAM (up to 16 GB), the iPhone works much better thanks to high-performance cache.

Lack of bloated by

When you first take a device based on Android, This will certainly notice a lot of unnecessary applications that not only fill the phone's memory, but also affect its overall performance.

The fact is that the multiple Google programs are added automatically, not to mention unwanted OEM applications. To forever delete such applications from the phone is almost impossible (if you do not resort to the routine of the phone).

For comparison, on the iPhone there is only a few pre-installed Apple applications that you can safely remove into several clicks.

The inflated software significantly affects the overall productivity of the device. Unnecessary applications use a large number of background resources, which is why the Android smartphone spends the performance that he simply does not need. 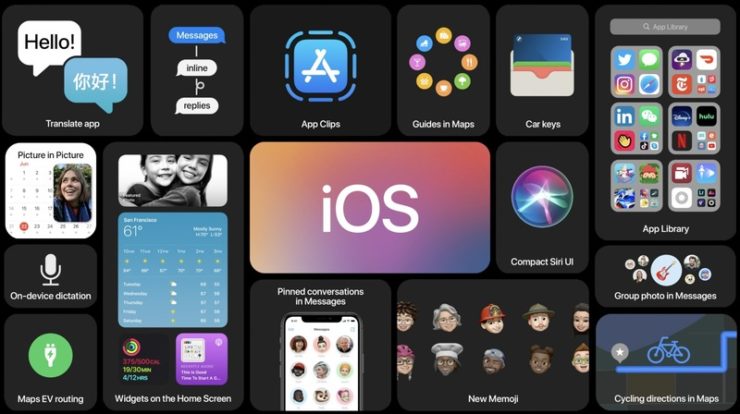 Apple easily exceeds Android in terms of updates for their own devices. All Apple's compatible devices can be updated to the latest IOS version immediately after release.

iOS 15 (at the moment the latest version of OS) was released in 2021 and compatible with such old devices as iPhone 6S, iPhone 6S Plus and even the first generation iPhone SE!

As for Android, then everything is much more complicated. Google updates only its own PIXEL devices, and other Android database devices receive updates from their manufacturers. Other companies receive upgrades from Google, optimize it for some models and release only after a few months.

There is another feature of the iPhone, which the most avid Android fans recognize. As you could already guess, we are talking about the phenomenal camera iPhone. Apple brought it to perfection, and no smartphone can compare with it!

13 Pro, the latest and most powerful iPhone today, equipped with the best camera in the company's history: 12 megapixel lens uses the same permission as iPhone 6S, but thanks to improved Sensors, a diaphragm F / 1.5 and a great post-processing, it can take pictures better than any other phone on the market.

In addition, the iPhone 13 Pro is exceptionally good in shooting with weak lighting, which does not have equal among other devices.

If it is not particularly going to various technical details, the impressive iPhone hardware is supplemented with a powerful software that in a pair makes it possible to create incredibly steep pictures and videos.

Apple constantly rewards its devotees, releasing the highest quality iPhone. The company's smartphone is practically able to exceed the device based on Android. There are not so many phones on the market that can impose an iPhone competition.

Yes, Apple gadget is very expensive even compared to flagship android smartphones, but the first, as a rule, works faster, longer and more smoothly.

Top smartphones for the ratio of "price-quality"

The most powerful smartphones of October according to AnTuTu

6 functions, thanks to which iPhone 8 can leave behind Android

How to disable wiretapping on an Android phone